Happy Fourth of July: A Focus Timeline of American History

While Independence Day officially celebrates the date when the Continental Congress formally adopted the Declaration of Independence, we have come to think of the holiday as a sort of birthday for the United States. The long, strange path we have taken since we claimed our “unalienable rights” of “Life, Liberty and the pursuit of Happiness” on July 4, 1776, testifies to the way that America remains, as George Washington called it in 1790, “the last great experiment for promoting human happiness.”

To celebrate Independence Day this year, we’ve created a historical timeline of some events in the last 170 years that define the ever-changing story of what America is and can be. From Harriet Tubman’s heroic freeing of enslaved people (in Harriet) to President Obama becoming the first African American president (in The Way I See It), each film captures momentous steps in America’s journey. 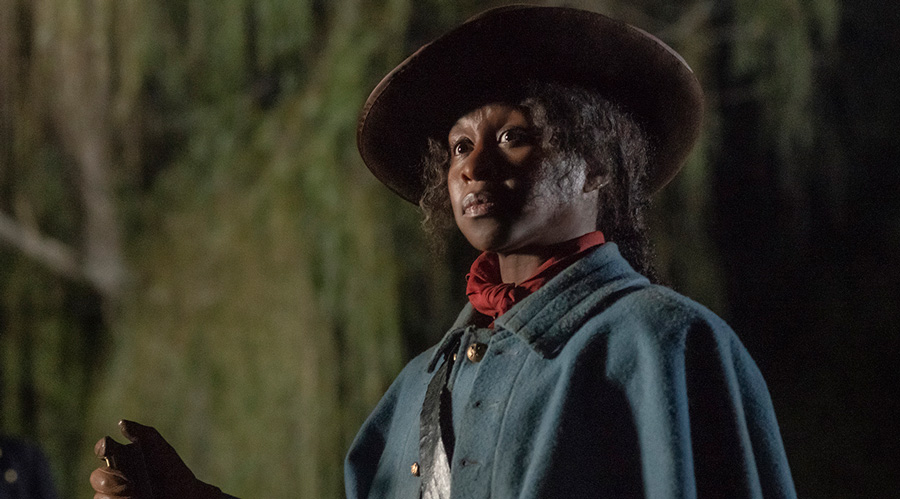 Kasi Lemmons’ Harriet recounts the inspiring life of Harriet Tubman (Cynthia Erivo). After escaping from enslavement in 1849, Tubman returned to the South the very next year to help others find freedom via the Underground Railroad. For the next ten years, Tubman risked her life, making numerous raids below the Mason-Dixon line to guide over 70 enslaved people to safety in the North. During the Civil War, she served the Union army as a scout and spy.

Watch Harriet on iTunes or Amazon. 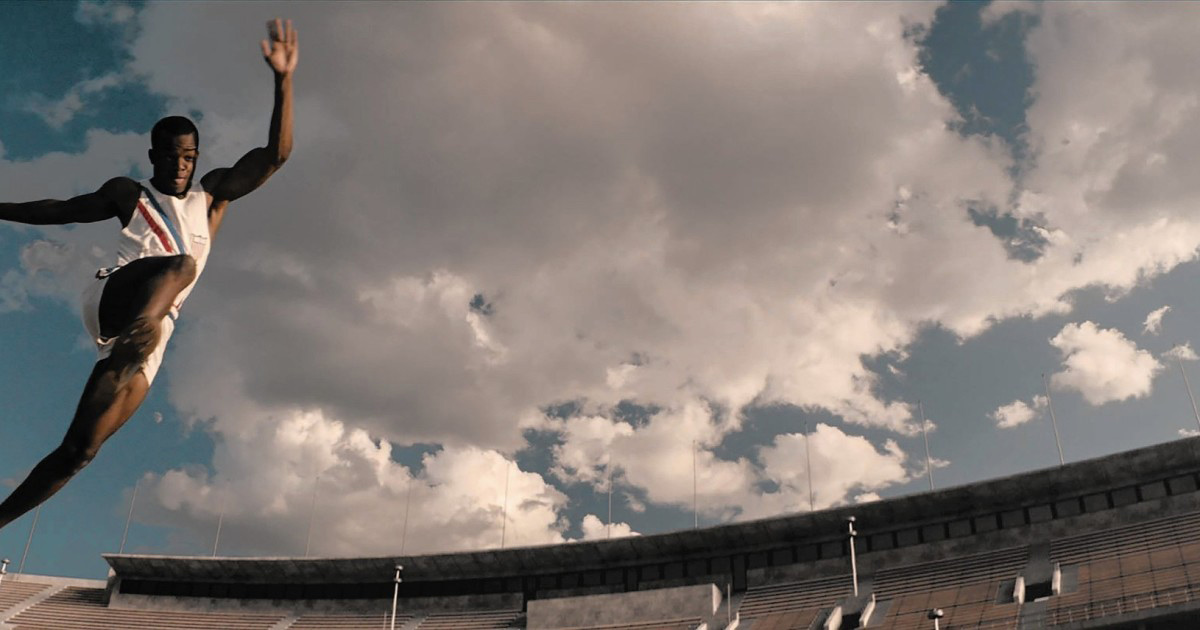 Adolph Hitler, who believed the 1936 Berlin Olympics would validate his theories of racial superiority, had his hopes dashed by Jesse Owens, who won four gold medals in track and field. In Race, director Stephen Hopkins showcases this historical moment for Owens (Stephan James) and the United States. The movie also documents Owens’ struggle as an African American college athlete and the discrimination he faced in the segregated South after the Olympics.

Watch Race on iTunes or Amazon. 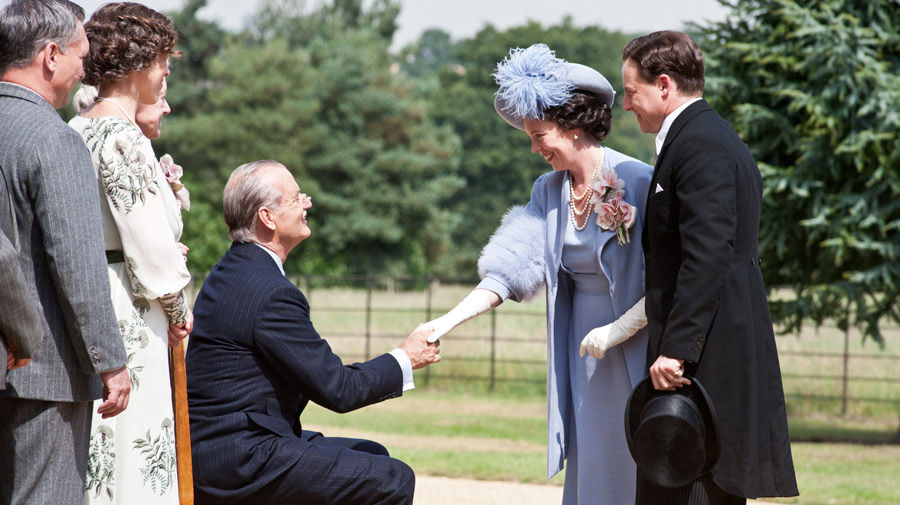 President Roosevelt (Bill Murray) welcomes the King and Queen of England (Samuel West and Olivia Colman) to his country home in Hyde Park on Hudson.

With war about to break out in Europe, King George VI and his wife Queen Elizabeth broke with tradition to visit their former colony for the first time. Richard Nelson’s humorous screenplay for Hyde Park on Hudson reimagines the weekend when President Franklin Delano Roosevelt (Bill Murray) and his wife, Eleanor (Olivia Williams), host the King and Queen of England (Samuel West and Olivia Colman) for a weekend of Native American dances, hot dog picnics, and political bonding. Indeed, the two leaders' private meetings would prove instrumental in forging a friendship and alliance that would endure the hard years of the great war ahead of them.

Watch Hyde Park on Hudson on iTunes or Amazon. 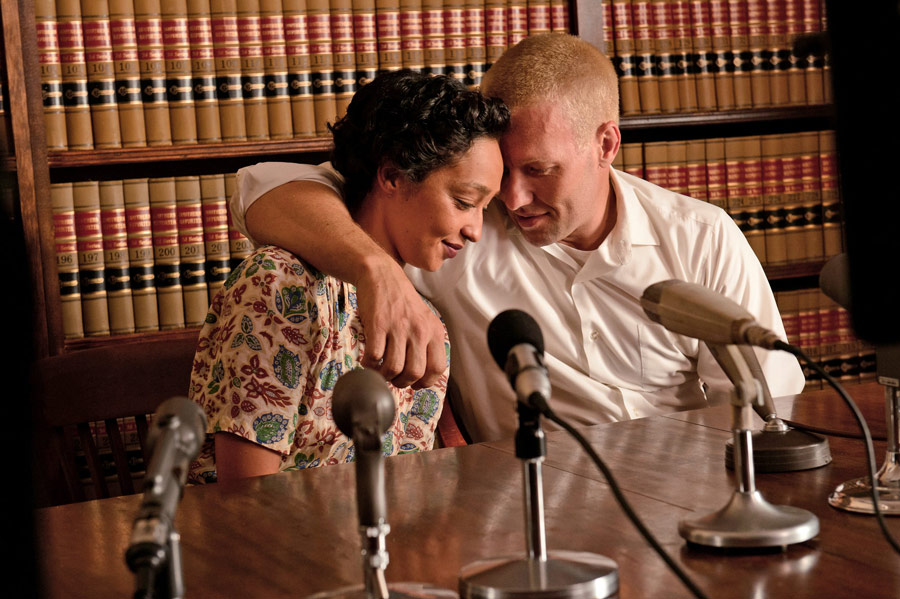 On June 12, 1967, the United States Supreme Court unanimously decided for the plaintiff in the case of Loving v. Virginia. In Loving, writer/director Jeff Nichols lays out the long, painful, and ultimately heroic tale of the couple at the center of that case. In 1958, the recently married Richard (Joel Edgerton) and Mildred Loving (Ruth Negga) were arrested for violating Virginia’s anti-miscegenation laws. They avoided doing time in prison by agreeing to leave the state. But over time, Mildred, homesick for the land she grew up in, stood up to this injustice and allowed the ACLU to take her case to the Supreme Court. 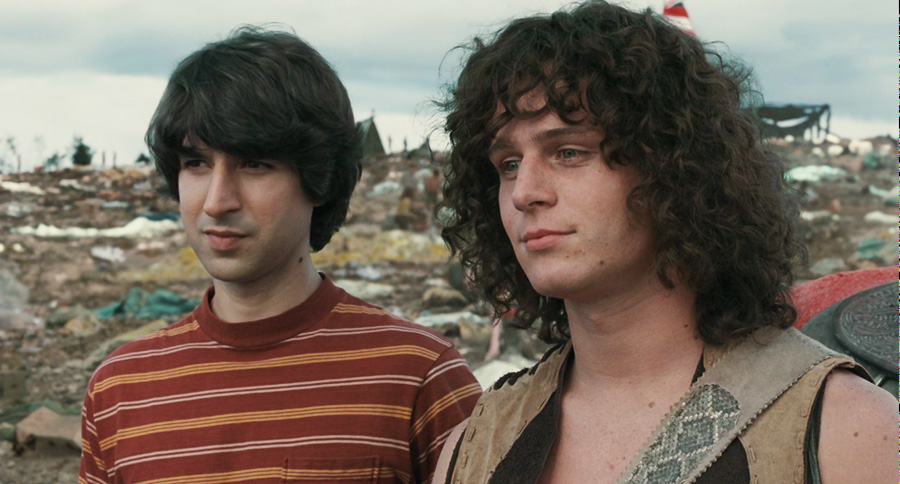 In 1969, a music festival in upstate New York set the tone for the emerging counterculture movement of the 1960s. In Taking Woodstock, an adaptation of Elliot Tiber’s memoir of the same name, Oscar-winning director Ang Lee brings to the screen the story behind the concert. When Tiber (Demetri Martin), a closeted NYC interior designer, moves to Bethel, NY, to help run his family’s decrepit motel, he proves instrumental in helping the concert’s promoter, Michael Lang (Jonathan Groff), get the event off the ground after it loses its original site. Although Tiber experiences the historic concert from a distance, the spirit of love and happiness, nevertheless, transforms his life. 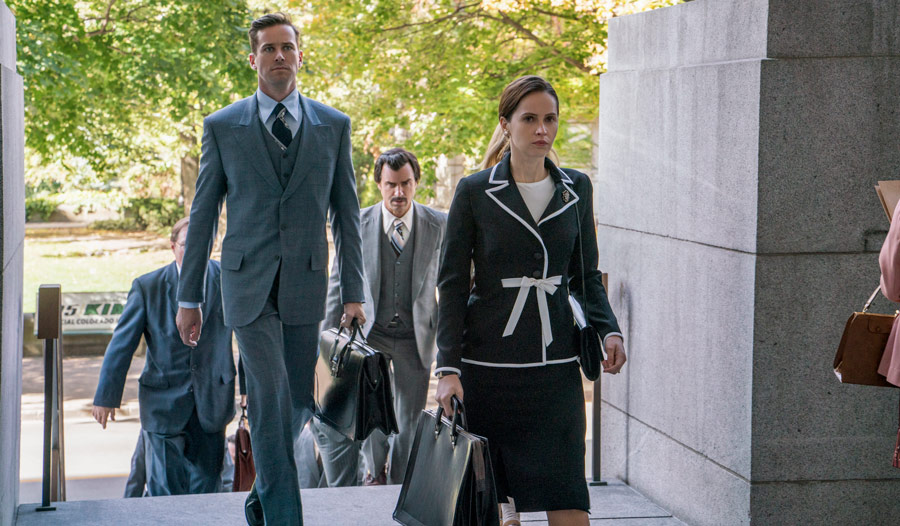 Martin (Armie Hammer) and Ruth Bader Ginsburg (Felicity Jones) in On the Basis of Sex.

1970: Ruth Bader Ginsburg argues her first major case | On the Basis of Sex

On November 22, 1972, the US Court of Appeals for the Tenth Circuit handed down a ruling that would have implications both in the struggle for gender equality and for the lawyer who argued it. Mimi Leder’s On the Basis of Sex with a screenplay by Daniel Stiepleman, the nephew of Supreme Court Justice Ruth Bader Ginsburg, remembers the jurist’s early days and the significance of this tax case. Even though Ginsburg graduated top in her Law School class, she was passed for employment by most major law firms. In 1963, she found work teaching at Rutgers Law School, developing a plan with her students on how to dismantle gender discrimination in the law. In 1970, her husband and tax attorney, Martin (Armie Hammer), brought her a case where she could put her theory into practice. With Moritz v. Commissioner of Internal Revenue Service, a case about a man denied benefits for being a man, Ginsburg not only won the case, arguing against gender bias in tax codes, but also found her voice as a lawyer.

Watch On the Basis of Sex on iTunes and Amazon. 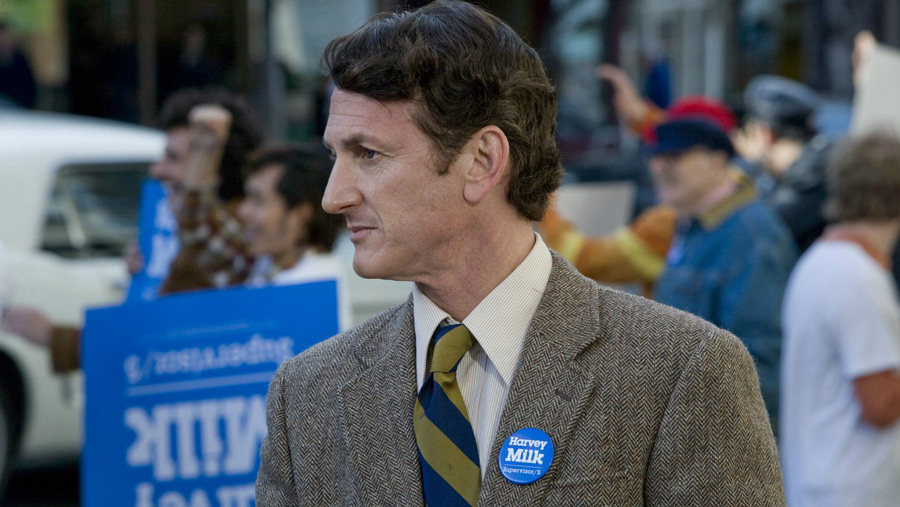 Gus Van Sant’s Milk brings to the screen the achievements of Harvey Milk (Sean Penn). Having moved to San Francisco in 1973, Milk first got involved in local politics while living in the predominantly gay Castro Street neighborhood. Wanting to fight back against the police harassment he was experiencing both as a resident and business owner, Milk ran for a seat on the Board of Supervisors. While he lost, he kept running, gaining the support of many other disenfranchised communities along the way. Then in 1977, Harvey Milk was elected. Ten months after being sworn in, Milk and San Francisco mayor George Moscone (Victor Garber) were assassinated by Dan White (Josh Brolin). 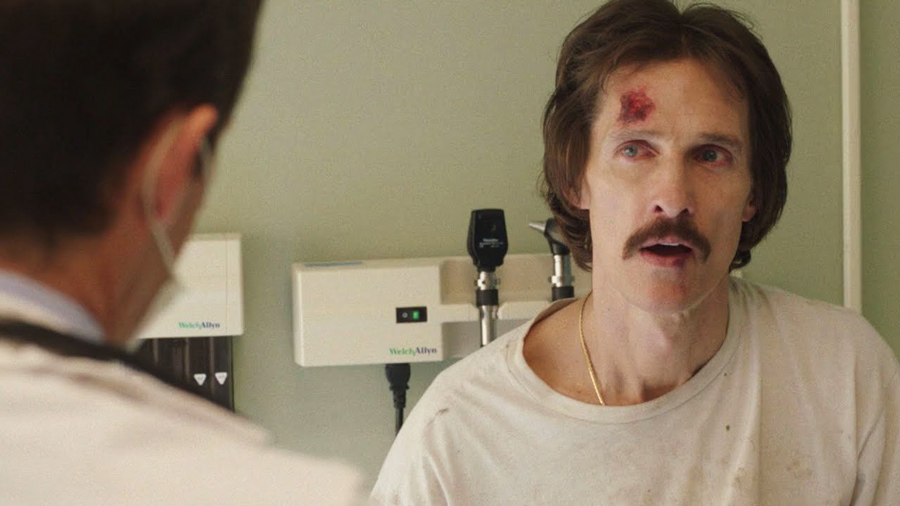 While the HIV diagnosis of a part-time electrician, rodeo cowboy might not seem like history, what Ron Woodroof did afterward impacted the public's perception of AIDS and the lives of people living with HIV. In Jean-Marc Vallée’s Dallas Buyers Club, Woodroof (Matthew McConaughey in an Oscar®-winning performance) refused to take his fate lying down. As a patient, he fought back against the medical profession's prediction about his survival, learning as much as he could about current AIDS research, drugs, and protocols. As a person living with AIDS, he started a buyers club, acquiring drugs not yet approved by the FDA for the local community. As a straight man, he worked hand-in-hand with gay men, demonstrating that AIDS was everybody's issue. 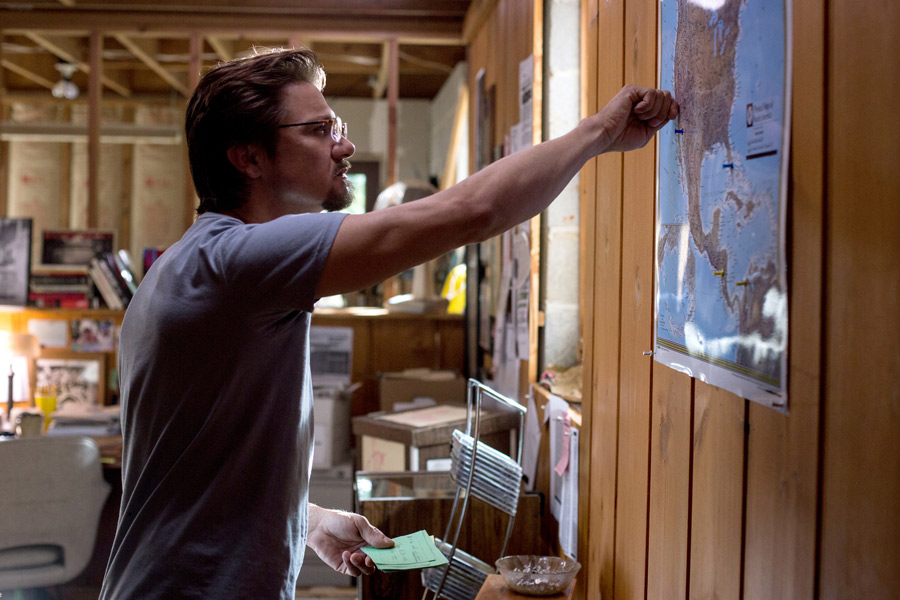 Jeremy Renner as Gary Webb in Kill the Messenger.

Michal Cuesta’s political thriller Kill the Messenger chronicles the political fallout from journalist Gary Webb (Jeremy Renner) publishing Dark Alliance, an in-depth investigation into the government's role in the explosion of crack cocaine in American cities. As a top investigative reporter for the San Jose Mercury, Webb discovered a complex web of money, guns, and drugs that implicated CIA agents, Nicaragua’s Contras, and local US gangs. After being lauded as the “Journalist of the Year” for his hard-hitting reportage, Webb soon found himself mired in a barrage of attacks by fellow journalists. It would take years before the CIA would validate many of his claims.

Watch Kill the Messenger on iTunes or Amazon. 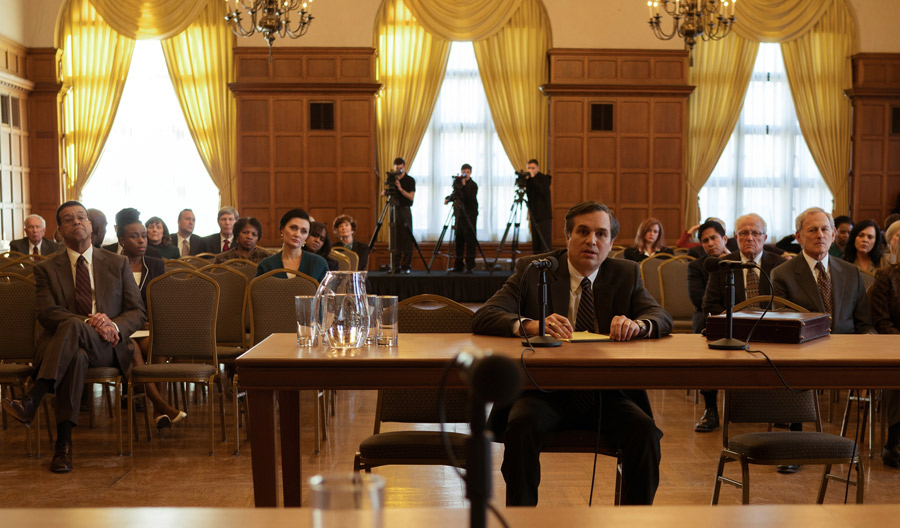 Todd Haynes’ true-life eco-thriller Dark Waters follows the fate of Robert Bilott (Mark Ruffalo), a corporate attorney whose life changes when he agrees to represent a West Virginia farmer who believes the death of his livestock had something to do with the DuPont factory upstream. Digging deep into DuPont's research archives and corporate history, Bilott uncovers an ongoing conspiracy to cover up an industrial chemical with potentially devastating consequences. As a result of his hard work, Bilott wins in 2005 a landmark case against DuPont, only to see his victory slowly eroded by corporate stonewalling and legal backtracking. 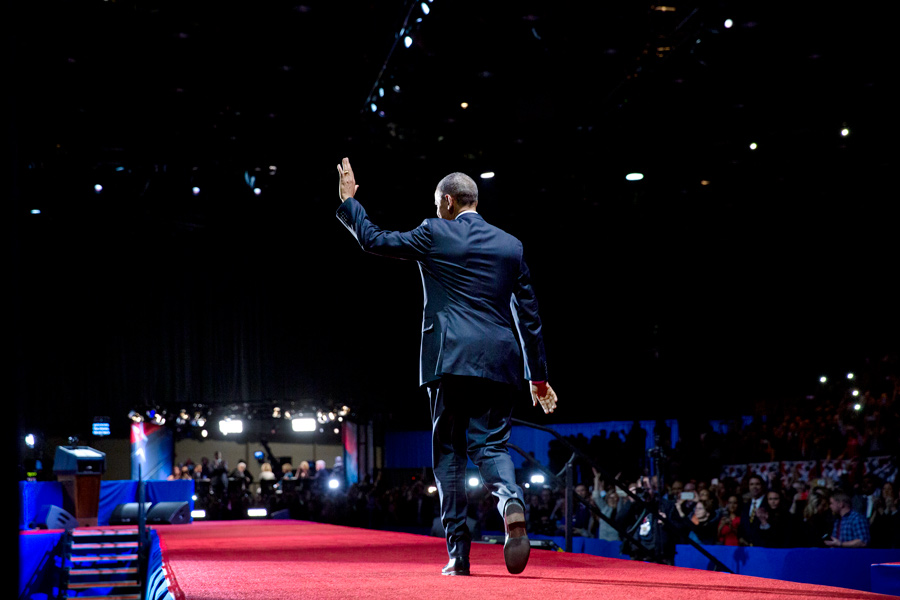 Barack Obama in The Way I See It.

2008-2016: Barack Obama becomes the first African American US president | The Way I See It

Released during the fall of the 2020 election, The Way I See It, Dawn Porter’s illuminating portrait of official White House photographer Pete Souza, provides a stunning look into history with its stunning slideshow of political and personal photographs of Obama’s eight years as the chief executive.

Watch The Way I See It.