Alicia Malone, the host of Reel Destinations, has taken film lovers to some remarkable locations in recent episodes. From the Highclere Castle (the real Downton Abbey estate) in Episode 1 "Downton Abbey" to Virginia’s Berkeley Plantation where much of Harriet was shot in Episode 3 "Harriet" to the streets, pubs, and townhouses of London which served as the setting of Atonement, Shaun of the Dead, Darkest Hour, and Phantom Thread in Epidose 2 "Love Letter to London."  In the next episode Malone and her intrepid crew head back to England to visit the world of Austen-land, the world of genteel homes and bucolic landscapes in which the films of EMMA. and Pride & Prejudice take place.

We spoke to Malone about what makes EMMA.’s home at Firle Place so special, the breathtaking beauty of Wilton House, and how these locales make their movies even more fascinating.

What is the theme of the new episode of Reel Destinations?

In our new episode, I was really lucky to have visited some of the locations in EMMA. I got to travel to England and step foot inside some incredible manor estates. When you are there, you feel like you are stepping inside the world of Jane Austen. Directed by Autumn de Wilde, EMMA. does not feel like a normal period piece. It is so colorful and bright. As a photographer, de Wilde brings such a unique visual look to the film that is reflected in the locations she uses. 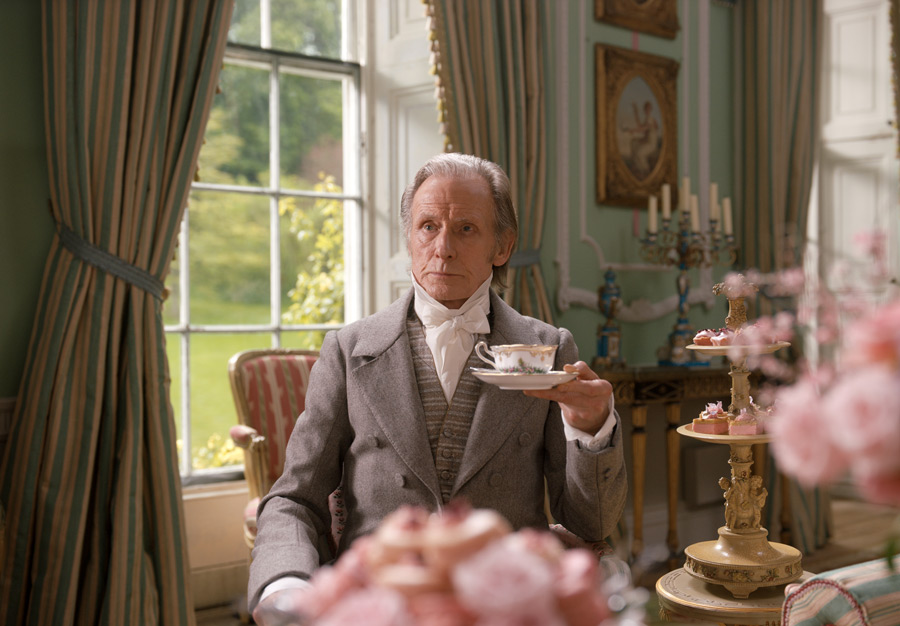 Tell us about Firle Place.

Firle Place is used for Hartfield, which is Emma’s home. Firle Place has been with the same family for some 500 years and is on an estate with over 300 acres in South Downs National Park. The house, so stately and distinguished, is breathtaking against the beautiful blue sky. When I walked inside, there was wallpaper created by EMMA.’s production team, and which the owner has kept up. I knew exactly what scenes had happened and where in the film. I talked with Lord Gage, the lord of the manor, who was so excited to have the production of EMMA. filmed at their house.

I understand that Firle Place is a bit unique as a film location.

The Georgian facade that was added in the 18th century really makes Firle Place feel different from estates like Wilton House. As a location, it was also unique in that they used both the exteriors and the interiors of the home, something that makes the spaces in the film feel more connected. Lord Gage told me that one or two films had previously been shot on the property, but not that many. He was so excited to be able to bring EMMA. there. 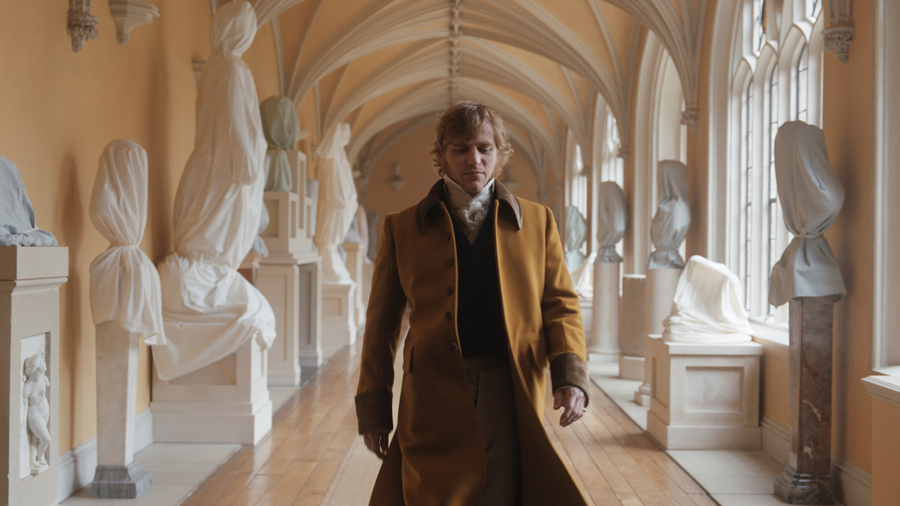 Many fans have fantasies of living in Austen’s world. Did being on these locations make you feel that?

It was hard not to imagine what it would be like living in Jane Austen’s world when I visited some of these beautiful homes. There is something so appealing about living in a world of manners and society. I fantasize that it would be a simpler, gentler time, with a good dose of romance and drama as well. Walking into these estates takes you there. You stand up a little straighter and act a little more proper. 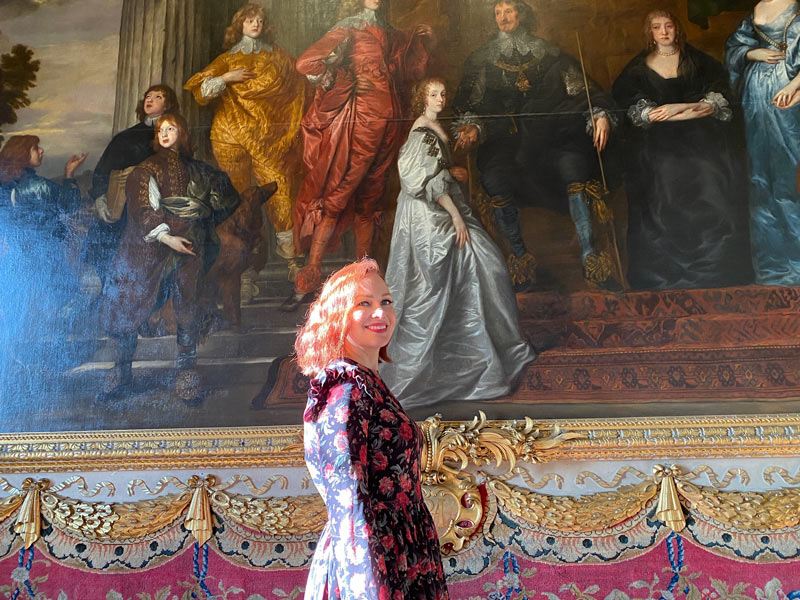 Alicia Malone in the Double Cube Room in Wilton House.

The other big location in EMMA. was Wilton House. What was that like?

Wilton House appears in EMMA. as Donwell Abbey, Mr. Knightley’s home. It also shows up in Pride & Prejudice. Among other things, Wilton House is famous for its Double Cube Room. You walk into it and there is art on the ceilings and on every wall as well as floor-to-roof windows with lavish red velvet drapes. It’s quite extraordinary. In the film, Emma walks about Wilton House, dwarfed by the huge paintings inside the Double Cube Room. To see it all in person is quite unbelievable. It is like being inside of a museum, but it is so much more relaxed than a museum.

How did they create the village of Highbury?

The village that doubles for Highbury looks completely different than the place in the film. The original town was beautiful—a picturesque village with a river running through it and filled with little houses and a lovely town hall. For the film they covered the roads with gravel. They brought in animals and livestock. They constructed little bridges. The village hall was completely transformed from a community center to the haberdashery shop in the film. You can recognize the same big windows that look into the shop, but everything else is completely different.

How does seeing these real places fire up your imagination?

After I saw these estates and villages in real life, I wanted to go back and re-watch the movies they appear in straight away. It’s hard to fathom the history behind these houses—how long they have been around for and how beautiful they are in person. With me coming from Australia, which is still such a young country, I have a hard time getting my head around the fact that a house I’m standing in was built in the 1700s. The other thing I love about visiting these locations is that I really appreciate the level of craft that goes into making a movie. While watching the movie, the scenes go by so fast that it’s hard to notice all the details. But being there in person gives me a whole new level of appreciation for how every detail, every scene, even every prop is considered.

Were you at all an Austen fan?

Yes, I read them when I was young in high school. But I gained a whole new appreciation when the original BBC series of Pride and Prejudice with Colin Firth came out. I bought a behind-the-scenes book of that series and learned all about the filming locations and costumes. After going to these locations, I really want to sit down and read Emma again. I’m sure that I will have a different sense of it now that I’m older.