Treat Yourself To Focus Films And Holiday Sweets This Season

This year, we’re celebrating the holiday season by looking back at the remarkable breadth and depth of Focus films last year, movies that showed us how deeply connected we are. From Chinese Americans living in Queens to a Korean-born adoptee in Louisiana to Americans in Marseille to a Syrian musician in Scotland to an unforgettable family in Belfast, the characters took us to places and experiences that were entirely new and wonderfully familiar.

During the joyous season, we’ve put together a variety of ways to enjoy these films (all over again) by serving them up with the holiday treats familiar to their characters. From Scottish Clootie Dumplings to Chinese Tangyuans to Mexican Marranitos, we wish you very happy holidays. 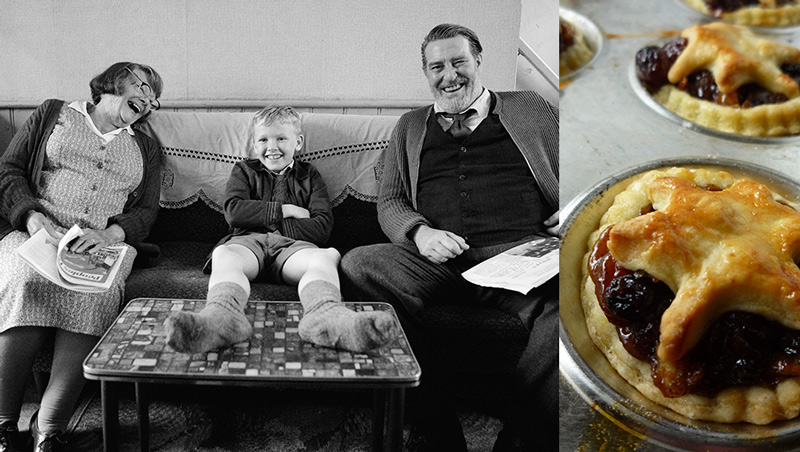 In Belfast, filmmaker Kenneth Branagh returns to the city of his youth to capture a family pulling together during troubled times. For 9-year-old Buddy (Jude Hill), the anxious political unrest of The Troubles blurs together with his happy adventures with his Ma (Caitríona Balfe), Pa (Jamie Dornan), and grandparents (Judi Dench and Ciarán Hinds). Indeed, as The New Yorker points out, “The movie is full of riots and barricades, yet it feels most alive when it turns inward, to the consolations of home.” If they were there for the holidays, his Ma might bake individual mince pies, to be followed (at least by the adults) with a mirth-giving shot of holiday spirit. This holiday, go see Belfast in the theaters, knowing that you have some whiskey and mince pies (perhaps homemade from Bigger Bolder Baking’s recipe) waiting at home.

Belfast is now on demand and playing in theaters.

In Ben Sharrock’s comedy Limbo, four refugees from around the world are brought together on a remote Scottish Island to await their fate as their residency requests are reviewed. Forming a reluctant family, the four men bring a bracing humanity and humor to the plight of people caught up in the whirlwind of world politics. As The Guardian trumpets, this is “film-making with a bold view on the world but also as gentle and intimate.” Indeed, the film recently swept the Scottish BAFTAs, winning for Feature Film, Director, Writer, and Actor (Amir El-Masry). If this family of strangers were still stranded come December, they might have gathered around the table to share a Clootie Dumpling, a holiday steamed pudding with dried fruit and spices. If you want to make your own Clootie Dumpling to enjoy while you watch Limbo, the National Trust for Scotland provides you with a recipe.

The official trailer for Half Brothers 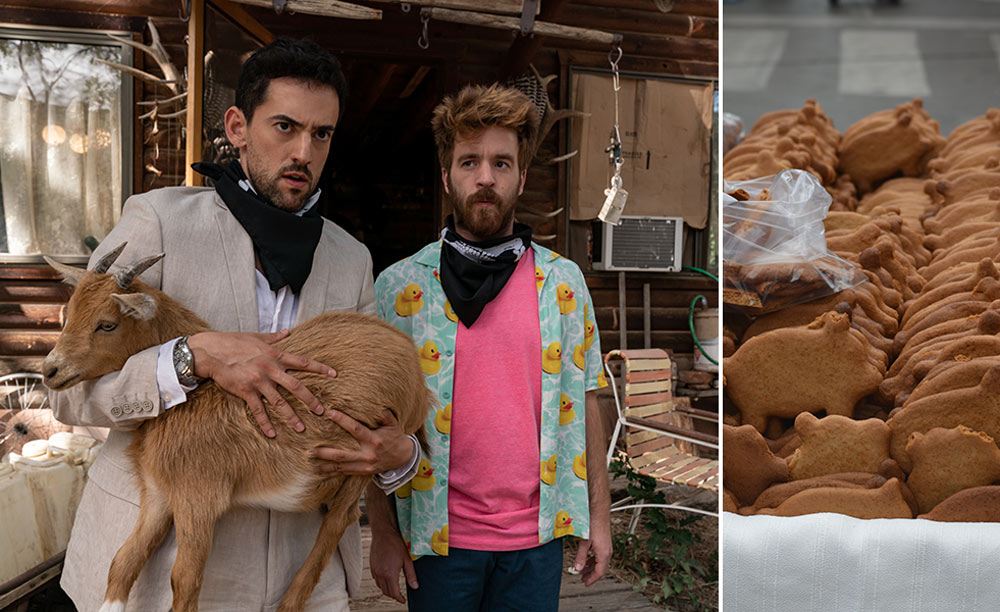 Luke Greenfield’s Half Brothers unites for the first time two siblings, Renato (Luis Gerardo Méndez) and Asher (Connor Del Rio), from different sides of the border. With little in common, the two half-brothers find common ground in the growing desire to protect each other while on a road trip to discover their father's mysterious legacy. "The film is 100 percent about empathy,” explains Méndez. “It's about being able to walk in someone else's shoes and understand a different perspective on life." This holiday season imagine sharing the traditional marranitos with your half-sibling from across the border as you watch this family comedy. Marranitos — cerditos, cochinitos, or puerquitos — are delectable molasses gingerbread cookies in the shape of pigs, often served during the holiday season with a big mug of Mexican hot chocolate. Try out Bon Appétit’s recipe for this Mexican delight. 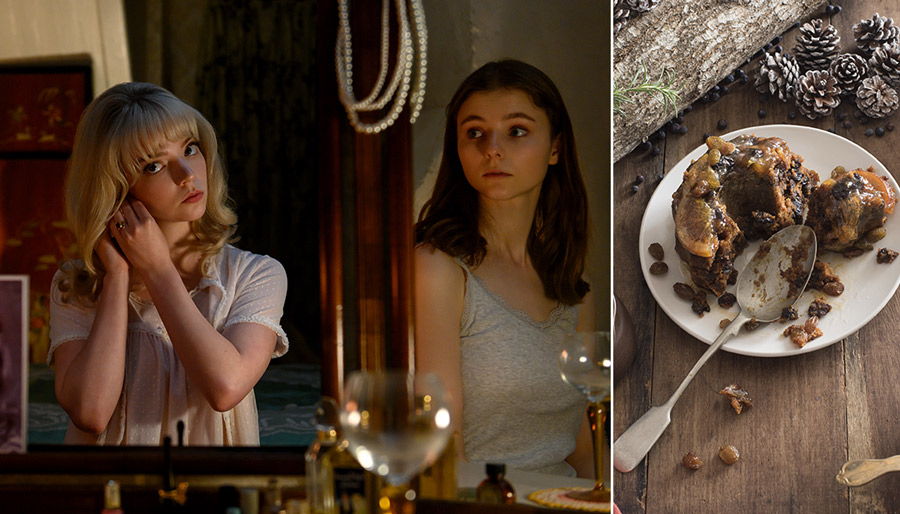 In Edgar Wright’s Last Night in Soho, a fashion student (Thomasin McKenzie) finds herself transported back to the music and fashion of London’s fabulous sixties when she makes a psychic connection with a singer (Anya Taylor-Joy) from that time. Meticulously DJed with music, fashion, and cinematic allusions of the period, the film is, as screenwriter Krysty Wilson-Cairns exclaims, “a love letter to that specific part of London, and to a bygone age when the Rolling Stones and Princess Margaret were hanging around.” Indeed The Wrap has dubbed it “one of the best London movies of the new decade.” It only makes sense to serve it up with another London classic, a holiday plum pudding. The delicious “pud” made famous in carols and by Charles Dickens will provide the perfect sweet and spicy accompaniment to Last Night in Soho.

In Boogie, Eddie Huang crafts a touching homage to his own experience growing up as a Chinese American. While Alfred “Boogie” Chin (Taylor Takahashi) dreams of becoming a basketball star, his Taiwanese American parents (Perry Yung and Pamelyn Chee) want to control every aspect of his ambition. Struggling between honoring his family’s wishes and just being a kid from Queens, Boogie finds himself caught between two worlds. For Huang, Boogie is about  “a family trying to make sense and reconcile a very East Asian way of life, a very Confucian family unit in America.” Get into the spirit of the Dongzhi festival, in which both Chinese and Chinese American families celebrate the winter solstice, by making the traditional sweet rice ball delicacy, Tangyuan, and watching Boogie. What to Cook Today has a simple recipe for beginners, or, if you want to learn from the master, see Huang whip up “Cheese Chips Chicken Bao” on Focus Features “What’s Cooking.”

The official trailer for Stillwater

In Stillwater, Academy Award®-winning filmmaker Tom McCarthy uses the city of Marseille to help his main character, Bill Baker (Matt Damon), understand his own identity as a man, father, and American. Moving to France to help his daughter, Allison (Abigail Breslin), who is serving time for a murder she insists she did not commit, Baker eventually allows the ancient French city to help him rediscover his purpose. “Having been to Marseille and feeling how unique and special it was to me,” notes McCarthy, “I hoped that would translate both to my collaborators and ultimately onto the screen.” For many, like the San Francisco Chronicle, “Audiences will come away feeling like they’ve really been somewhere, that they were moved by the people they met and expanded by the experience.” If Bill Baker were still in Marseille for the holidays, the locals, Virginie (Camille Cottin) and her daughter Maya (Lilou Siauvaud), might introduce him to navettes, the boat-shaped, orange blossom-flavored cookies served during the holidays. You can make your own, courtesy of Culture Crunch, to serve while watching Stillwater this season.