Estados Unidos: The Mexican/American Unity of Half Brothers

Luke Greenfield’s Half Brothers—in theaters on December 4—follows two siblings, Renato (Luis Gerardo Méndez) and Asher (Connor Del Rio), as they meet from opposite sides of the border to embark on a road trip to discover their roots. In 1994, their father Flavio (Juan Pablo Espinosa) left his young son Renato behind in Mexico so that he could earn enough money in the US to return home a wealthy man. That was the last time Renato saw his father, until he received a phone call to visit him in Chicago 20 years later and found him on his deathbed. There, he is introduced to his half-brother Asher for the first time. The two siblings, who share nothing in common, are pushed by their dying father to take a road trip together to gain a different perspective of each other's lives. If the film is about people from different cultures finding common ground, the film’s production experienced a similar fate. To tell this hilarious and touching tale about fathers, sons, and brothers, cast and crew from both sides of the border added something personal to the mix. For writer/producer Eduardo Cisneros, for example, the film allowed him “to bring together this family of Latinx actors and put them in the right roles,” as well as introduce these remarkable talents to an American audience.

To highlight the film’s cross-cultural collaboration, we are introducing  you to some of the cast and crew from both sides of the border.

Half Brothers is now playing in theaters. Get tickets or learn how to watch today.

The official trailer for Half Brothers. 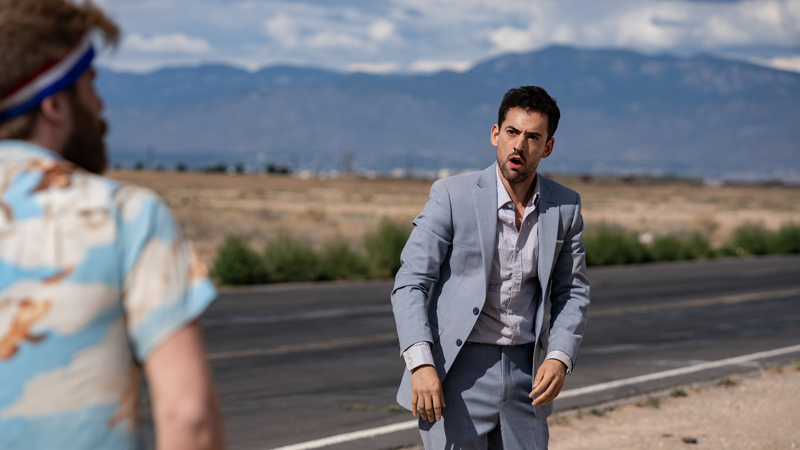 Luis Gerardo Méndez in Half Brothers.

In Half Brothers, Luis Gerardo Méndez plays Renato, Flavio’s older, Mexican son. As a child, Renato spent his days hanging out with his dad and flying remote-control planes together. After his father left, Renato grew up to become a self-made man, starting his own aviation company and trying to control all aspects of his life. While Méndez has starred in a few English language projects, including Netflix’s Murder Mystery and the recent reboot of Charlie’s Angels, his most celebrated roles have been in Mexico productions. Having worked in TV and film since 2004, his career took off in the last few years. He starred in several of Mexico’s most successful feature films, including Cantinflas and The Noble Family (Nosotros Los Nobles). In 2015, he starred in Netflix’s first original production in Mexico, Club de Cuervos, which ran for four years, becoming an international sensation. For Half Brothers, Méndez stepped up to become an executive producer as well as the film's star, feeling that the story has a lesson for everyone today. For him, the changing relationship between Renato and Asher is “a beautiful analogy of Mexico and the States. We are not that different.” 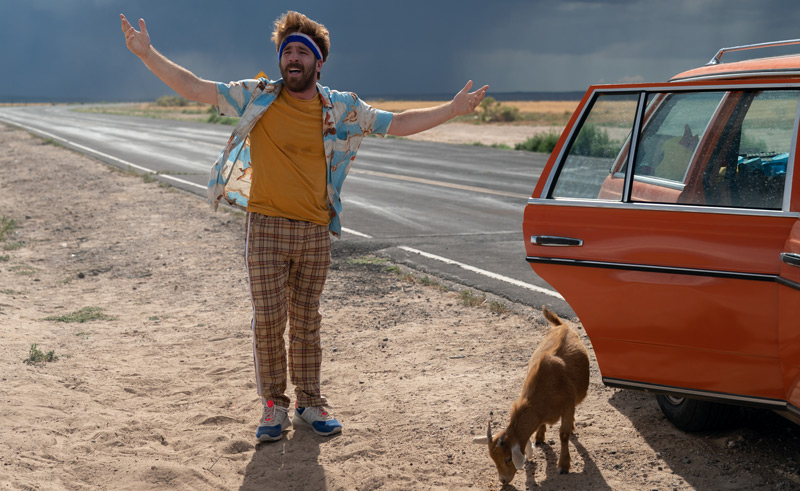 Connor Del Rio in Half Brothers.

Connor Del Rio plays Asher in Half Brothers, Flavio’s American son. Unlike the serious and successful Renato, Asher is a bit all over the place, connecting, but not committing, to anything. “He has the mind of a fourteen-year-old,” Del Rio jokes about his character. Del Rio was up for taking on Asher's personality, having built a career playing energetic cut ups, from the Cartoon Network series Level Up to the ABC digital series This isn’t Working to stepping out as the comic relief in the horror thriller Unfriended: Dark Web. 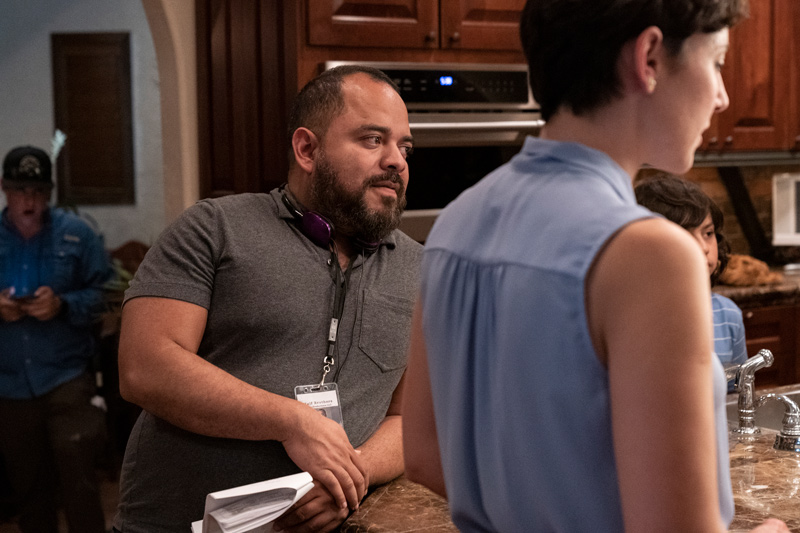 Writer/producer Eduardo Cisneros  on the set of Half Brothers.

Half Brothers began with writer/producer Eduardo Cisneros reflecting on the trajectory of his life having grown up in Mexico. “I was looking at what was happening in my life, being an immigrant,” explains Cisneros. “I began to imagine a father trying to explain to his adult children all the things that he couldn’t fully explain when they were kids.” Having been born and raised in Monterrey, Mexico, Cisneros moved to Mexico City to pursue a career as a writer. There he created two of the country’s most successful television series: XHDRBZ and La Familia P. Luche. His work writing the 2013 comedy blockbuster Instructions Not Included—which became North America’s highest grossing Spanish-language film of all time—brought him to the United States. With his producing/writing partner Jason Shuman, Cisneros is currently in pre-production on a number of comedies, including Flamingo Thief (with Randall Park and Ken Jeong) and To Leslie (with Andrea Riseborough and Allison Janney). Having lived and prospered on both sides of the border, it was important for Cisneros “to get across in Half Brothers precisely the idea of taking a minute to stop and think what the other person’s going through.” 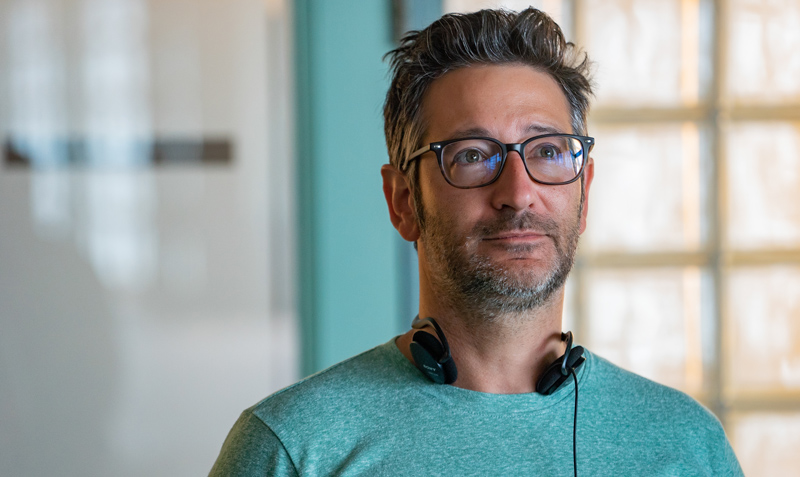 After growing up in New York and Connecticut, Luke Greenfield moved west to attend USC School of Cinema-Television. After the success of his 1999 short film The Right Hook, Greenfield landed a job directing The Animal, The Girl Next Door, Something Borrowed, and blockbuster hit Let’s Be Cops. Like Cisneros, Greenfield uses his own personal experience to frame his characters' perspective. For the small town feel in The Girl Next Door, he recalled growing up “in Westport, Connecticut, which is a very safe, secure town, where nothing can really happen to you, and from the outside world you're very protected.” For Half Brothers, Greenfield considers how “when you look at where we are in a moment in time... the thematics of empathy and seeing things from someone else’s point of view have never been more prescient and necessary.” 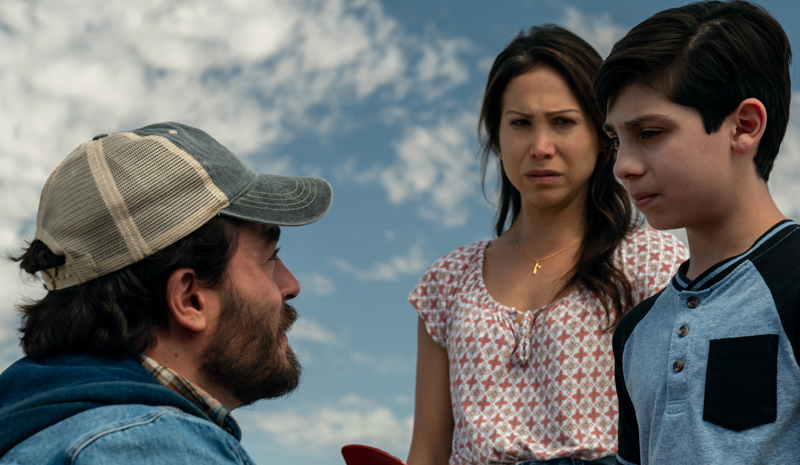 Bianca Marroquin as "Tere" (center) in Half Brothers.

In Half Brothers, Bianca Marroquin plays Tere, Renato’s mother and the wife that Flavio leaves when he crosses the border into the United States. Having grown up in Matamoros, Mexico, close to the Texas border town of Brownsville, Marroquin experienced firsthand both the dream and hardship faced by Mexicans hoping to immigrate. Marroquin was especially proud to be part of a project that “speaks to all of beauty that we possess in Mexico: our culture, our traditions, the kind of people that Mexico breeds and the professionals and the stories of success that we are.” Marroquin was in college in Monterrey when she successfully auditioned for the Spanish-language version of the musical Beauty and Beast. From there, she starred in a number of Spanish-language musicals in Mexico City, including Rent, Phantom of the Opera, and Chicago. Her success there led to her being invited to take over the role of Chicago’s Roxie Hart on Broadway. Her talent has allowed her to move back and forth between the US and Mexico on a number of theatrical and television productions. Most recently, she appeared in the FX hit series Fosse/Verdon as Chita Rivera. 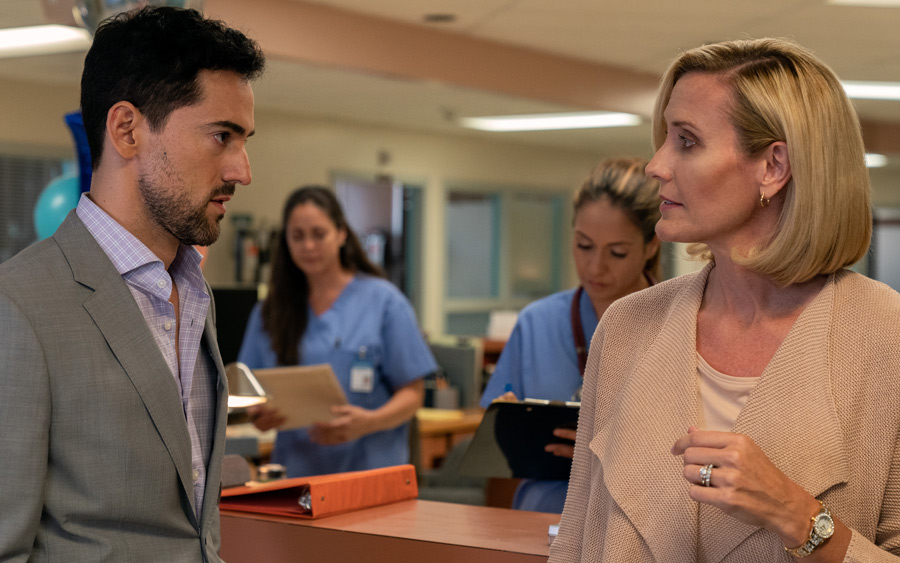 Ashley Poole plays Katherine in Half Brothers, the business woman who believes in Flavio’s vision and eventually marries him. Having grown up in Tennessee and lived in Colorado, Poole has worked both in the casting department and as an actress, most recently in the Netflix film Amateur and the independent film American Bystander.” For Poole, the film uses comedy to bring home an important point for everyone: “It reminds us that we are all broken and all have a journey, and at the end of the day, love is what matters. It stands for unity and connection.”