Summer Fun: Double Features At Your Own DIY Drive-In

With a few more weeks of summer left, you still have time to indulge in one of the season's great pleasures — double features under the starry skies. While actual drive-ins might be hard to find, you can make your own. Put up a sheet in the backyard or find a wall in an empty lot, get a digital projector with enough throw to project your favorite films, and invite your families and friends. House Beautiful provides a step-by-step guide on how to manage throw pillows, new projectors, and flavored popcorns. To get the low down on the best DIY projectors, both Yahoo Entertainment and The New York Times' "Wirecutter" have some suggestions.

What to show? We’ve put together six evenings of double features — one of them actually being a triple — for any mood you might be in. Want to be inspired? We have two amazing films about real-life heroes. A fan of Jane Austen? Settle in for a pair of love stories that will last long into the evening. How about a good laugh? We've got three films that will take you long into the night. Just turn down the volume for the neighbors. 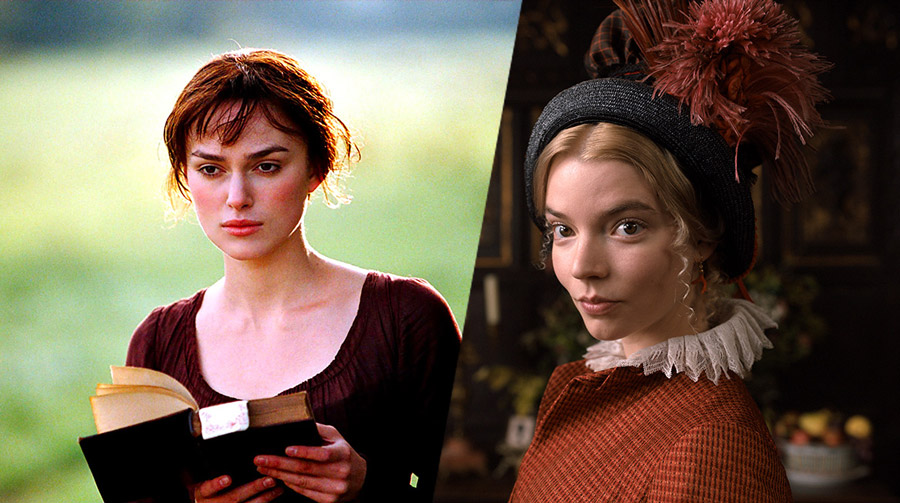 Keira Knightley in Pride & Prejudice and Anya Taylor-Joy in EMMA.

Love is in the air | A Jane Austen double feature

Stage a glittering literary affair with a Jane Austen double feature. Start with Joe Wright’s award-winning Pride & Prejudice with Keira Knightley as the indomitable Elizabeth Bennett and Matthew Macfadyen as the dashing Mr. Darcy. Then, follow it up with the Autumn de Wilde’s EMMA. with Anya Taylor-Joy as the title character and Johnny Flynn as the swooning Mr. Knightley. Collider recently ranked Pride & Prejudice as the top Austen adaptation with EMMA. coming in a close third. Watch them back to back and, using your sense and sensibility, decide which pierces your heart most thoroughly. Of course, provide plenty of pastries and perhaps some potent potables for refreshment. 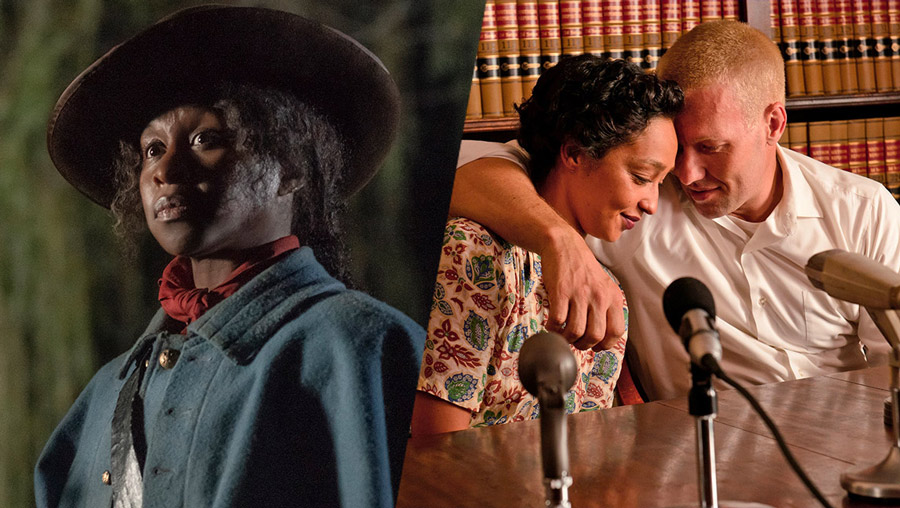 Cynthia Erivo in Harriet and Ruth Negga and Joel Edgerton in Loving.

Profiles in Courage: Loving and Harriet

If you need a double dose of inspiration, Harriet and Loving provide a powerful one-two punch. Kasi Lemmons' Harriet portrays a real-life superhero in its story of the 19th-century freedom fighter Harriet Tubman (Cynthia Erivo). As Baltimore Magazine points out, “lest you think the film is exaggerating Harriet Tubman’s bravery and accomplishments, please remember that she was a conductor of the Underground Railroad, the first woman to lead an armed expedition into war, a Union spy, an abolitionist, and a leading supporter of women’s suffrage. If that’s not a superhero, I don’t know who is.” Heroism of a quiet form is found in the shape of Mildred and Richard Loving (Ruth Negga and Joel Edgerton), the title couple of Jeff Nichols’ Loving. As MTV’s Amy Nicholson exclaims in her headline, They are the “quiet heroes who legalized interracial marriage.” Gather the neighbors, and perhaps plan your own act of quiet heroism afterwards. 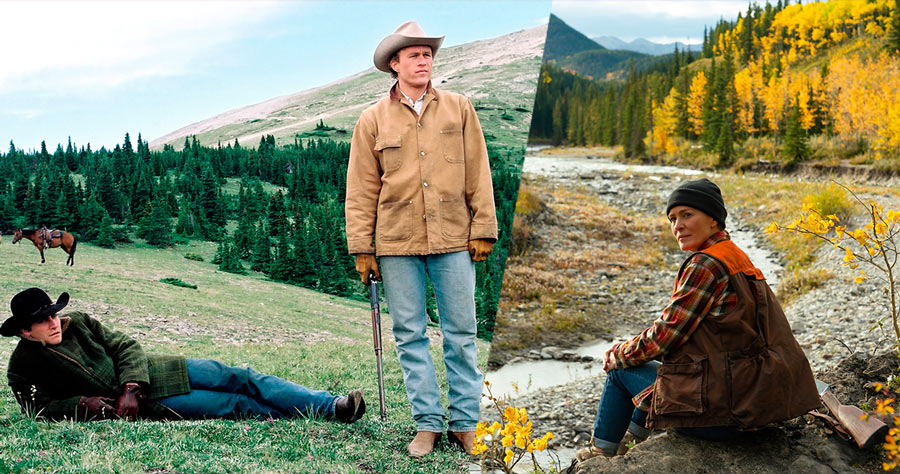 Jake Gyllenhaal and Heath Ledger on Moose Mountain in Brokeback Mountain and Robin Wright in Land.

While you are already outside watching a movie, why not visit the American West with two films (shot within miles of each other) that capture the grandeur, power, and spectacle of nature. Shot in the magnificent Canadian Rockies, Ang Lee's Brokeback Mountain allows the deep passion between Ennis Del Mar (Heath Ledger) and Jack Twist (Jake Gyllenhaal) to be reflected in the breathtaking scenery. For executive producer Michael Costigan, Lee captures the story “in terms of the landscape and how it plays subtly -— and then not so subtly — into the story of Ennis and Jack." For her debut feature Land, Robin Wright needed a location to represent both nature’s awesome beauty and terrifying indifference. Calgary’s Moose Mountain, the same peak that Ennis and Jack gallop across in Brokeback Mountain, provided the perfect location. In telling the story of a woman who moves to the mountains to rediscover her purpose in life, the landscape had to play an active role because, as Wright explains, "nature is a character in this movie.” 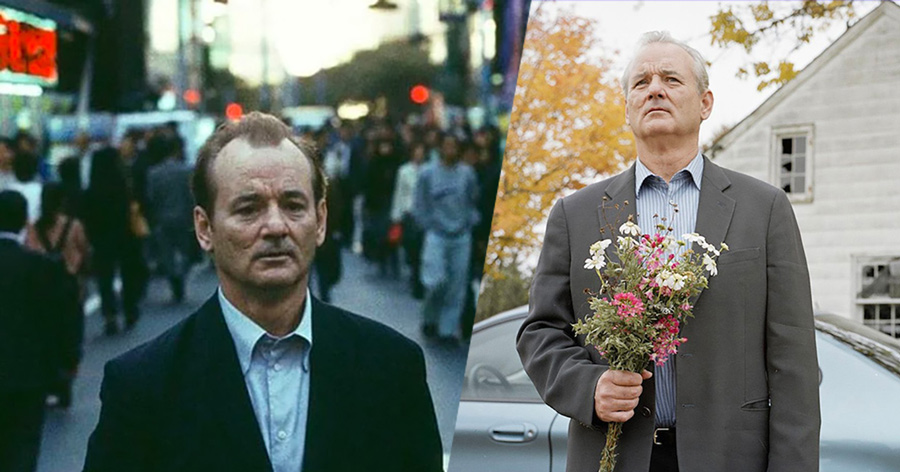 Bill Murray in Lost in Translation and Broken Flowers.

For its list of “The 5 Best Bill Murray Performances,” Indiewire includes both Lost in Translation and Broken Flowers. In Sofia Coppola’s Lost in Translation and Jim Jarmusch’s Broken Flowers, Murray reveals a more sublime and soulful version of his comic persona. As the faded movie star Bob Harris who befriends Charlotte (Scarlett Johansson) in the Park Hyatt Tokyo in Lost in Translation, Murray shows us a side of his comedy we’ve never seen before. Slate’s David Edelstein exclaims, “I felt as if I were seeing his face for the first time.” In Broken Flowers, Murray, who stars as a middle-age lothario who takes a road trip to revisit his past loves, takes his dry humor to a new level. Newsweek exclaims, “Murray is a perfect deadpan Jarmusch vessel, absorbing a lifetime of shocks with little more than an arched eyebrow and a wince that could be either indigestion or existential angst.”

Make it a Triple | The Cornetto Trilogy

Why settle for a double feature, when you could watch the Cornetto Trilogy —Shaun of the Dead, Hot Fuzz, and The World’s End. The three films (all directed by Edgar Wright, written by Wright and Simon Pegg, and starring Pegg and Nick Frost) reinvent genre filmmaking with the trio's inspired madness. Wright dubbed them the Cornetto trilogy (in the style of Krzysztof Kieslowski’s The Three Colors Trilogy) after a journalist noticed that there was a Cornetto, a British frozen ice cream treat, in both Shaun of the Dead and Hot Fuzz. He later realized that what really linked the films together was the unique and hilarious relationship between Pegg and Frost. Calling the three movies  “Trojan Horses,” Wright explains, “they’re genre films that have a relationship comedy smuggled inside a zombie movie, a cop movie, and a sci-fi movie.” To keep track of the films' running gags, Screen Rant has a helpful list, which, of course, includes their famous fence-jumping joke.

Watch Shaun of the Dead now on iTunes or Amazon.

Watch The World's End now on iTunes or Amazon.

The evacuation of Dunkirk in Atonement. 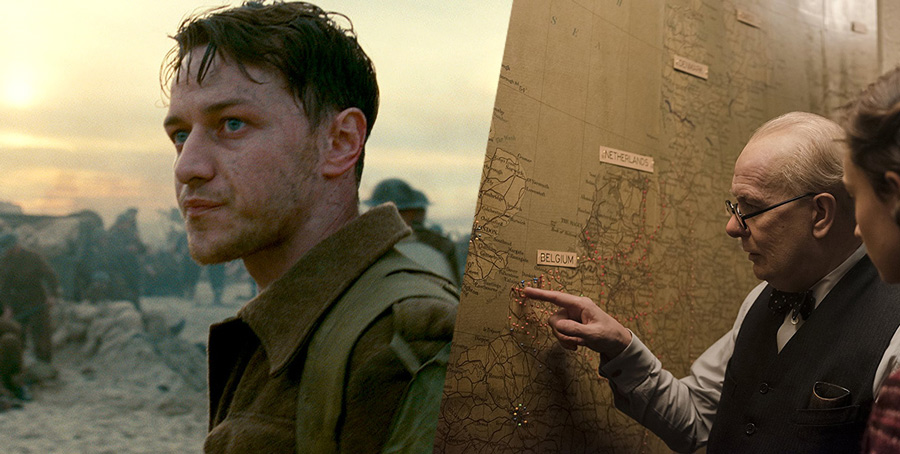 James McAvoy in Atonement and Gary Oldham in Darkest Hour.

History in close up and long shot  | Atonement and Darkest Hour

For history buffs, Joe Wright’s Atonement and Darkest Hour provide two looks at one of the most heroic events in 20th-century history, the evacuation of Dunkirk. In Atonement, a sprawling epic that follows three characters over multiple periods of time, the Dunkirk evacuation occurs in the second part, as Robbie (James McAvoy) wanders the beach. Captured in a single shot, Wright captures in close-up the horror and heroism of the British troops stranded on a beach as the Nazi troops press in on them. Ten years later, Wright returned to the story of Dunkirk with Darkest Hour, a nail-biting suspense drama about Winston Churchill (Gary Oldman in an Academy Award®-winning performance). Looking at the behind-the-scenes negotiations and political wrangling of the crucial first hours of Churchill's administration, Wright zooms out to show how Dunkirk fit into the larger design of destiny as England stood on the brink of disaster and war.