Behind The Credits: Joseph Wallace, Animator, The Sparks Brothers

In his documentary The Sparks Brothers, Edgar Wright showcases Sparks, the innovative band led by brothers Ron and Russell Mael. Having recorded 25 albums in 50 years, Sparks kept pushing the creative envelope to explore new sounds and personas. To illustrate the band’s range and versatility, Wright needed collaborators whose work is as striking as the band’s. “Because the brothers are so filmic, and interested in film, additional animation… would be perfect,” notes Wright. “I wanted to have imagery in it that would be worthy of one of their videos.” Joseph Wallace, who’d created the stop-motion animation for Spark’s acclaimed video “Edith Piaf (Said It Better Than Me),” was chosen to create animation sequences throughout the film. Chosen by the BBC Performing Arts Fund as one of their “32 Ones to Watch,” Wallace has become one of the UK’s most adventuresome and imaginative animators.

As part of our Behind the Credits series, we spoke with Wallace about what it was like creating segments for The Sparks Brothers, what makes working in stop-motion animation so exciting, and what he has in the works.

See The Sparks Brothers now on demand and in theaters!

The official trailer for The Sparks Brothers. 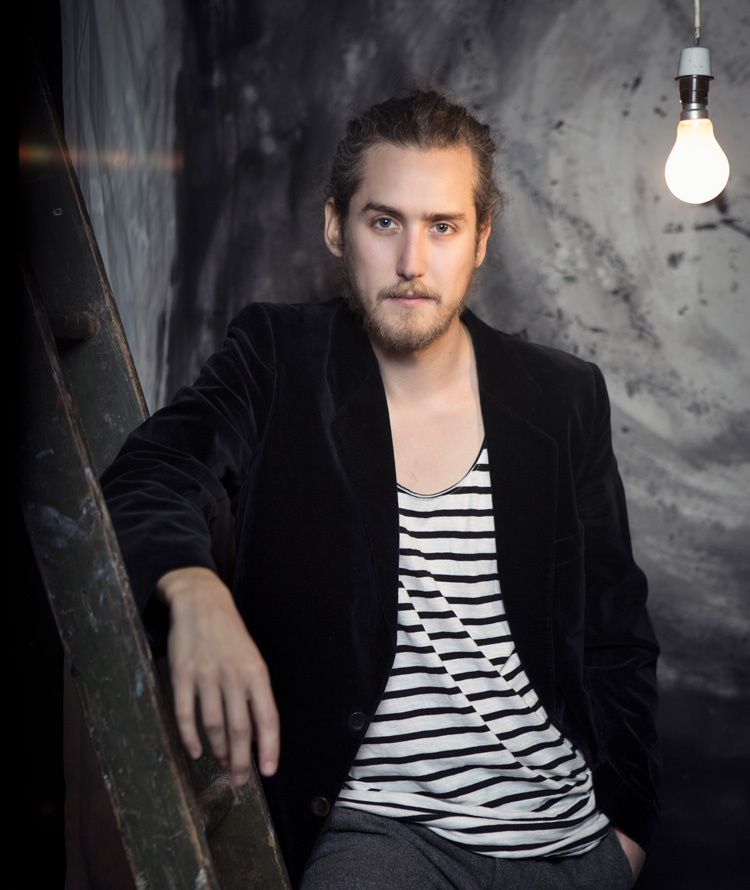 How did you end up creating stop-motion animated segments for Edgar Wright’s The Spark Brothers?

I made the Edith Piaf music video for Sparks in 2017 and met Edgar backstage at one of the band’s shows in London. He’d seen the Piaf video and was shooting the concert for the doc. He talked to me using animation to tell parts of the band’s story and fill in gaps where there wasn’t archive footage. He asked if I’d be interested in working on it. I basically signed up there and then!

What sort of segments did Edgar Wright want you to create for the documentary?

We had some meetings early on bouncing ideas around, but beyond that everything really came from the edit. It was quite organic. The editor Paul Trewartha has incredible instincts. He got through a huge amount of material in a short space of time and started constructing the story of Sparks with Edgar. They identified fairly early on which sections were going to need animation so that I had enough time to plan and shoot the sequences. We had a long list which was then refined into a short list. I sketched out ideas for each moment before shooting them with my team. Paul would send me sections of the timeline which covered certain episodes of the band’s history, and there would be gaps with a title card that simply read “animation.” I would then storyboard and plan my sequences to fill those gaps. Some were choreographed to music, some used voice-over from the talking heads — for example, Neil Gaiman discussing the narrative possibilities of the Propaganda cover or Paul Morley telling the story of when John Lennon called Ringo Starr about Sparks (which the eagle-eared will realize is a voiceover cameo by Simon Pegg and Nick Frost). 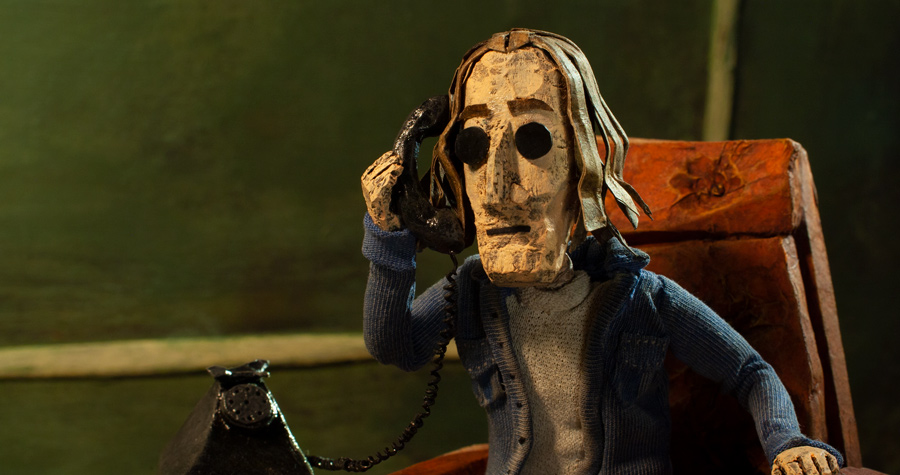 You work in various media, including cut-out animation. How did you construct the puppets you used in The Sparks Brothers?

The film has quite an eclectic visual language that comes from the archive material. There are pamphlets, magazine covers, grainy home movies, TV clips, music videos, etc. Edgar had seen some of my other work and really liked the paper collage cut-out technique and thought it would work for the film. So we decided to add this to the mix alongside the puppet animation. Then there was a particular sequence with a mallet that made me think of Aardman Animation’s seminal 1986 music video “Sledgehammer” for Peter Gabriel. I went for plasticine animation for that sequence and got a guy called Sam Gainsborough in to animate it. For the puppets, we re-used the heads I’d carved for the Edith Piaf video and made new bodies. My puppet maker Gemma Byrne made intricate costumes based on the outfits that Ron and Russell were wearing in the interview sections. There are some other moments where I wanted to almost combine cutouts and puppets so we took photos of Ron and Russell from certain eras and cut these out and stuck them onto stick figure bodies made from wire. These were fun to do and it worked for Sparks’s slender — “snakey,” as Patton Oswalt puts it in the doc —figures.

How hard was it to get the likeness of Ron or Russell?

It was definitely a journey trying to create puppet versions of Ron and Russell for the Piaf video. I started by doing clay sculpts, but those turned out to be too naturalistic. So I ended up carving the faces and the process of carving enabled me to abstract their likenesses. It really became about capturing their essence. Sparks had animated versions of themselves done before but I was thrilled when they told me that they felt the puppets from Piaf were their favorite animated representations of themselves. 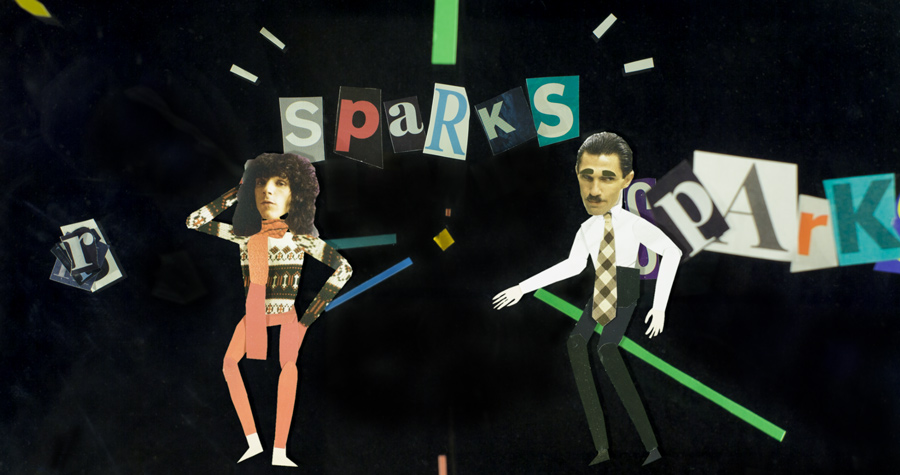 What were your biggest challenges creating work for The Sparks Brothers or “Edith Piaf (Said It Better Than Me)”?

The biggest challenges always have to do with vision and ambition vs. the limitations of time and money. “Edith Piaf (Said It Better Than Me)” was made in six weeks with a super small team. With The Sparks Brothers, I had a much bigger crew but we still had a fairly limited time and resources to make twelve animated sequences. And I was taking time out of production on my new short film to get them made. I had model makers and puppet makers in a warehouse attic studio making sets, puppets, props and cut-out elements for the multiplane sequences. Then I would run downstairs to the shoot studio to direct the animators before lighting the next sequence with my co-DOP Jon Davey. All the while, I’d be checking in with Edgar sending ideas back and forth. Sometimes we’d improvise ideas on the spot like adding in camera moves or adding lip sync to a certain moment. It was manic but a lot of fun!

What was the most fun part of creating the animation for The Sparks Brothers?

Being so fast and spontaneous meant the whole process was pretty enjoyable. I was really responding to the ideas that were coming out of the edit and thinking on my feet about how I could bring ideas to life in a relatively simple but dynamic way. Playing around with all the different techniques was a great part of the process. And, of course, it was great to collaborate with Edgar. Along with directors like Jean-Pierre Jeunet, Peter Greenaway, and Julie Taymor, his films have been a big influence on the way that I tell stories on screen and utilize cinematic camera work in my animations.

Did you go to school to learn animation or did you just start doing it?

A bit of both. In school, I studied sculpture and painting and then animation and film, both the artistic and production side of things. The great thing about stop-motion animation is that it’s an incredible alchemy of so many methodologies. It’s a mixture of painting, sculpture, theatre, performance, photography, and film. It’s incredibly hands on. It’s practical and artistic but also performative and technical in equal measures. I love that you can build worlds from the ground up so the visual language can be incredibly unique. It can look like nothing else.

What do you love most about doing stop-motion animation?

Every day on a stop-motion shoot is challenging and rewarding in different ways. I’m primarily an animation director but I also write, design, and photograph my work. I love developing and executing the vision of the film. In animation, the design and direction tend to go hand in hand. I’m definitely more of a director than an animator. Sometimes I animate out of necessity, but I’m certainly not the best animator. It’s much more rewarding for me to work with brilliant animators who can bring characters to life and take on my direction while bringing their own performance ideas to the work. Animators are really like actors and the animator/director relationship is similar to the actor/director relationship in live action. 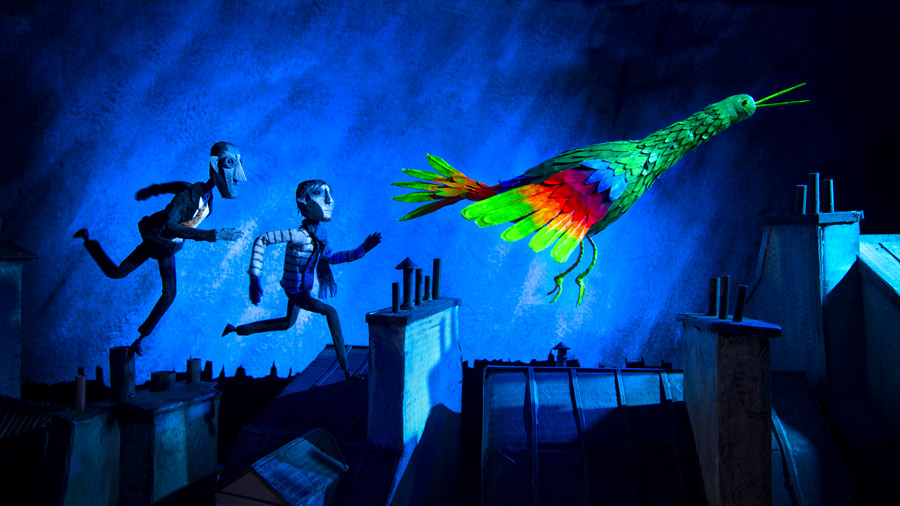 Ron and Russell Mael animated in Joseph Wallace's video for “Edith Piaf (Said It Better Than Me).”

As an animator, what inspires you creatively?

I love watching both animated and live action films, but I tend to get more inspired by other mediums than animation directly. I go to museums and galleries a great deal and obsessively gather images that inspire me. I also collect objects. My house is full of antique furniture, Victorian dolls, Sicilian puppets, 1940s postcards, etc. I think there’s a creative spark that comes from looking at a piece of art and thinking about how that could translate into animation. What’s the story? Who is this character? How could you create this in three dimensions?

What was the first thing that you saw that made you feel that you wanted to create stop-motion animation?

I saw the first Wallace and Gromit film when I was a child and was hooked on stop-motion from that moment. I was lucky in knowing that I wanted to work in film and animation from an early age. I grew up in a pre-CGI era and I always felt an affinity with these tactile, textural stop-motion programs and films. It often comes back to world-building and escapism for me. There’s a metaphorical, playful quality to animation. If live action is prose, animation is poetry. There have been many other influences over the years, but my stop-motion holy trinity is made up of Jiri Trnka, Jan Švankmajer, and the Quay Brothers. And Emir Kusturica’s Black Cat, White Cat really made me want to tell wild, surreal stories on screen.

What would be your dream project as an animator?

Having worked in theatre in the past and told long-form stories, I’m really keen to make animated features. I’m developing several ideas at the moment which are in various stages of development. Sparks and I have been discussing the possibility of turning their musical The Seduction of Ingmar Bergman into a stop-motion musical feature. It’s early days, but we’re keen to make it happen. I’d like to see more animated cinema which isn’t aimed at young audiences. I want to tell bold and dramatic stories which are visually arresting and deal with complex themes. I’m currently shooting my new short film "Salvation Has No Name", an animated drama about the refugee crisis which is funded by the British Film Institute and features the voices of Itziar Ituño from Netflix’s Money Heist and Yasmine Al Massri from ABC’s Quantico. The film is due to begin its festival run early 2022.