Speaking With Wendy Lee About Making the “Scene”

Actress and content creator Wendy Lee steps up to moderate the recent “Politics in Film” episode of the Focus Features digital series You Know That Scene. With her panel of Jacqueline Coley (Editor, Rotten Tomatoes), Scott Mantz (President, LA Online Film Critics Society), Trisha Hershberger (Entertainment Influencer, Host, Producer), and Matthew Hoffman (Correspondent, Regal Cinemas), Lee explores how films like Darkest Hour, Milk, Loving, and On the Basis of Sex bring up politics in a range of ways. In moderating her panel, Lee uses her experience as a film critic (in her popular YouTube channel The Movie Couple) and web journalist to bring out a range of perspectives from entertainment professionals.

We talk with Lee about the power of movies, her experience growing up in both Taiwan and America, and the need for more diversity in film and film journalism.

Watch the "Politics in Film" episode of You Know That Scene

You seem to wear many hats. How would you define what you do?

I originally came out to Los Angeles to pursue acting, but over time I got into the YouTube thing. I started a channel with my husband called The Movie Couple on which we do movie reviews and some lifestyle pieces. From there I got hired at Collider, where I have learned so much about the industry working with different critics and talent. It's crazy how I get to be in the middle of everything every day.

Did you want to work in the entertainment industry when you were young?

Growing up in Taiwan, my dad enjoyed showing me movies like Top Gun and Die Hard. Even though I did not speak English, I was still so engrossed in the content of what I was seeing. My real world would fall away. I knew that I wanted to get into the entertainment world, to have an audience feel the way I felt watching those movies. 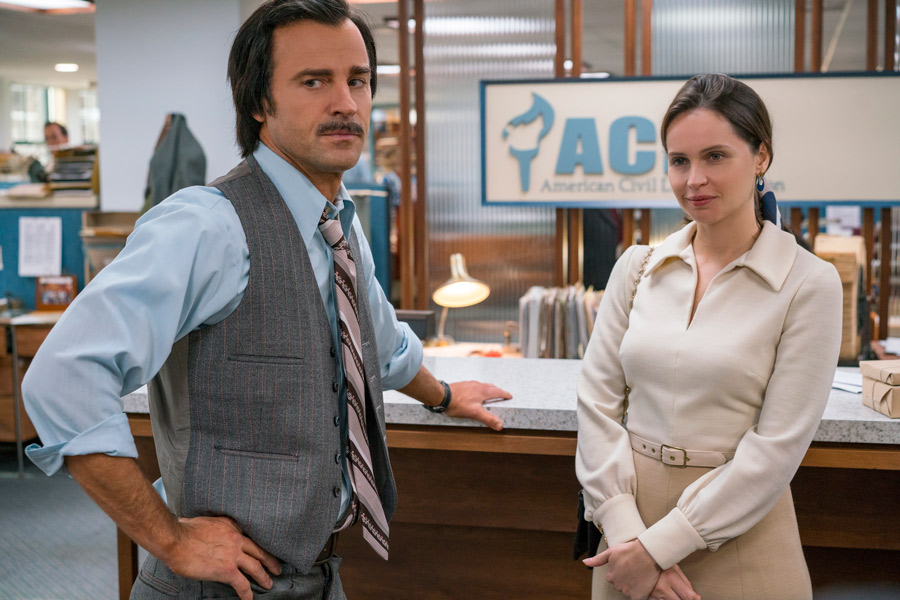 Justin Theroux and Felicity Jones in On the Basis of Sex

You grew up Taiwan?

I was born and raised in Taiwan before I moved to Fort Lauderdale at age 12. I didn’t understand what was going on all during my first year and learned English with a lot of tears and frustration. My mom brought me here because she thought the school system was better. She was the kind of parent that if I got an A, "why wasn't it an A+." I went to middle school and high school in Fort Lauderdale and then college at Florida International University. I majored in English but I didn't finish because I wanted to act. When my mom went back to Taiwan for a visit, I decided to pack up and go to California to pursue acting. My mom was so angry she didn't talk to me for a long time.

What do you see as your future?

I never really saw myself doing what I do now. I had such tunnel vision as an aspiring actress that I never saw there were other ways to get my voice out there. When the content creation thing happened on YouTube, I didn't know how much I would enjoy it until I actually did it. Now I feel like I'm standing at a crossroads. I still go on auditions and I still do movie reviews. The future is wide open.

Since your panel is about politics in film, can you talk about the films that influenced you. What was the first film that moved you?

The very first movie that I saw in theaters in Taiwan was The Last Emperor, because that was approved by my mom. I don't know why my parents picked movies for me that were not age appropriate, but I enjoyed the cinematography and I thought the film was beautiful. But more importantly, this was one of the first times that saw people on screen that looked liked me. Before then all the movies my dad had shown me had American actors. That kind of opened my eyes. 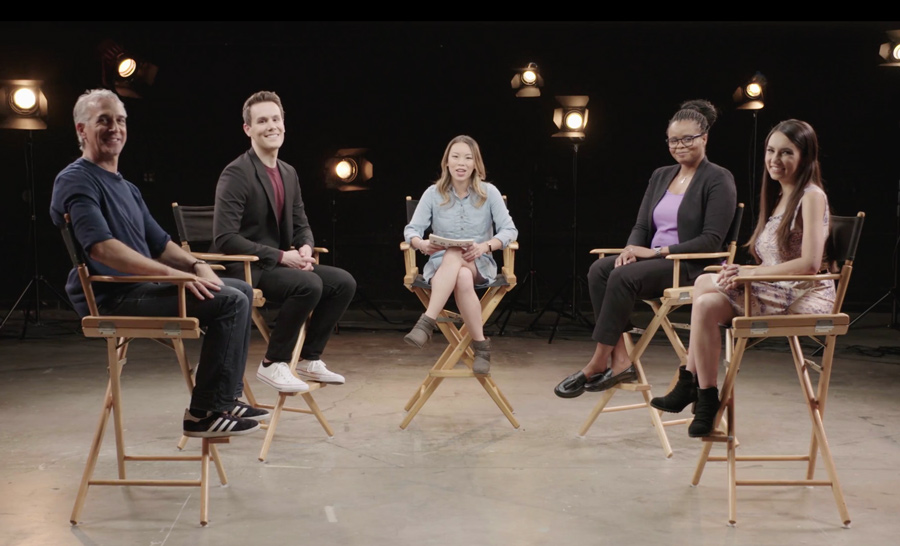 Were there films that you connected to having grown up both in Taiwan and the United States?

Most recently Crazy Rich Asians. I was so happy and hyped for the movie that I read all three books [of Kevin Kwan’s Crazy Rich Asian trilogy] and watched the movie three or four times. The movie touched on both Asians born in their respective countries and Asian American immigrants. In the film, Rachel Chu, who is Asian American, is quite westernized. That was something that was very familiar to me and it was really interesting to see other people's reactions to it. Fresh Off the Boat is the one show on television that features an Asian family with an almost entirely Asian cast. I remember telling a friend about my backstory and he said, “Oh my gosh, you're just like the show Fresh Off the Boat.” Whenever Jessica Huang (Constance Wu) says one of her lines, I think, "Yeah, that's my mother." In the first episode, Eddie Huang (Hudson Yang) goes to school with a packed lunch which he opens in front of his friends, who say, "Ugh! That smells bad and looks like worms." The exact same thing happened to me when I started elementary school. After that, I told my mom, “Please don't make me food anymore. Just give me lunch money.”

What do you think has changed in the entertainment industry? What needs to change?

What has changed is everyone is a little bit braver about speaking up because of social media. It's not just journalists or critics, but also aspiring journalists and critics. Because of social media, people don't need to be validated by who they work for. I think of someone like Jeremy Jahns who has a major voice, but doesn't work for a trade publication. What I would like to see change is that I would like to see more female journalists and more diversity. Everybody comes from a different background and has a unique point of view, so why not put that inside your newsroom or on your website? 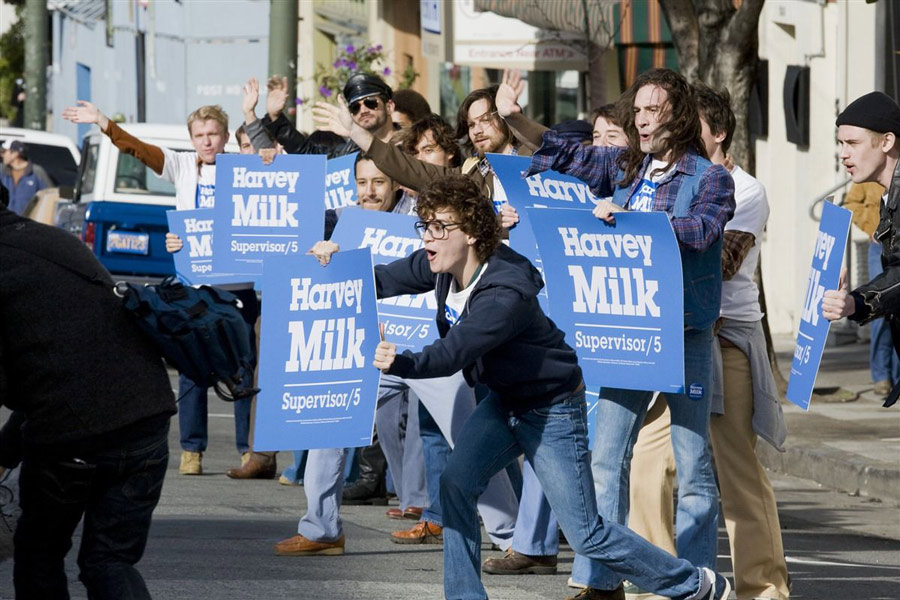 Gus Van Sant's Milk, one of the film discussed in the "Politics in Film" episode

Were there issues raised during your panel that you would like to explore more deeply?

I felt that way for every movie we talked about since each of us has such different perspectives. Scott Mantz, for example, is such a wealth of knowledge about classic movies that I really just wanted to hear him because there was so much I hadn't picked up on when I was researching these movies. Every episode took about two hours to shoot, but I could have gone on for much longer talking about movies with those four.