How Mark Rylance's Grandfather Inspired His Character in The Outfit

Mark Rylance has played a whole host of memorable characters: an eccentric Steve Jobs-like billionaire in the film "Don't Look Up," a Russian spy in "Bridge of Spies" (for which he won an Oscar), and even the heroine Viola in Shakespeare's "Twelfth Night" which earned him a Tony Award. His newest character, Leonard, in The Outfit, is a quieter role for the legendary actor: Leonard is an unassuming maker of men's suits. This role, in particular, felt personal to Rylance. "He's like my grandfather," says Rylance.

The Outfit, directed and co-written by Oscar-winning screenwriter Graham Moore, is set in Chicago in the 1950s. It is about an English cutter who specializes in making men's suits. But after World War II, the only people who could afford custom-made, bespoke suits were the mob. Soon, Leonard finds himself in business with the Boyles, a local gang that uses his shop as a drop spot. Everyone comes to a head one night as the mobsters go into the shop, intent on finding the mole in their midst.

Rylance's grandfather wasn't in the mob, and he wasn't a cutter. Although, he is the same age as Leonard in the film and, like Leonard, was deeply affected by World War II.

"[My grandfather] was captured in Hong Kong in '42," explains Rylance. "So as I grew up, I gradually became aware of the effect of that — of that war on him and on all the people in the small village where he lived in England. So that was the background, that my character had obviously come through the war."

And like Leonard, Rylance's grandfather knew the value of a good suit, which in those days was something that lasted a man his entire life. "I remember his attention to clothes, that he had one suit, and it was an important suit," recalls Rylance. "When I was first taken to the theater, we would always wear a suit and a tie." While his co-stars had to get used to wearing hats in The Outfit, Rylance already had that covered, thanks to his grandfather: "I inherited my grandfather's hats, so I've been a lover of hats since the '70s."

The Outfit is inspired by classic Hollywood film noir and crime thrillers. The men in The Outfit speak a language of guns and violence. In the film, the Boyles are engaging in a turf war with a rival mob, the LaFontaine. Rylance sees this rivalry as a direct result of PTSD, of people deeply affected by World War II coming home and repeating that same cycle of violence.

"What these terrible wars do to the men — no one comes out of war unscarred. So that's an interesting aspect of the film because that's part of Leonard, and it's part of the background around the other characters in the film, as well," says Rylance, before adding, "I have to be careful not to give things away."

That's because The Outfit is a thriller and a mystery. The big questions in the film are: Who is the mole? And who is going to leave the cutter shop alive? The Outfit, co-written by Johnathan McClain and Moore, was inspired by a little-known factoid, which is that the first bug that the FBI ever planted was in Chicago in 1956, in a cutter's shop.

Rylance can't get too deep into the twist and turns of his character. But he does think it's fitting, no pun intended, that a cutter would be the person holding all of the secrets. "This is a man who has an impeccable way of measuring another man's strength and weaknesses," says Rylance.

A suit maker like Leonard, who was trained in London's famed Savile Row, doesn't just take average arms, legs, inseam measurements. Rylance discovered this when, in preparation for the film, he apprenticed at Huntsman, a 172-year-old Savile Row fashion house. Over two weeks, he learned how to make the suit he wears in The Outfit. Rylance shadowed Campbell Carey, Huntsman's creative director.

"Campbell wasn't just measuring the length of my arm or my elbow, he was talking with me and hearing what kind of man I am. He was measuring my mind and my heart, my identity, my humbleness, my soul, putting them all together to really get a sense. You see a little bit of that in the film, you see me measuring different people."

"The way that [Campbell] measured my body was absolutely unbelievable," enthused Rylance. "I've been measuring many times in the theater, I've never had some of these measurements, extraordinary measurements, that were to do with how we move. And even when they put the suit on me for the first time and it looked fabulous, he took it off and had it remade three times. Because he noticed that it was a bit too regular, a bit irregular."

Rylance says he's never had a suit fit him so well. But more importantly, he discovered that what a suit maker, known in industry terms as a "cutter," like Leonard, can do isn't just measure a man's body for a suit — he can also ascertain a man's character. He may seem to blend into the backyard, but a cutter can notice more than he lets on, making playing such a character compelling for Rylance.

"Campbell wasn't just measuring the length of my arm or my elbow, he was talking with me and hearing what kind of man I am. He was measuring my mind and my heart, my identity, my humbleness, my soul, putting them all together to really get a sense," says Rylance. "You see a little bit of that in the film, you see me measuring different people." 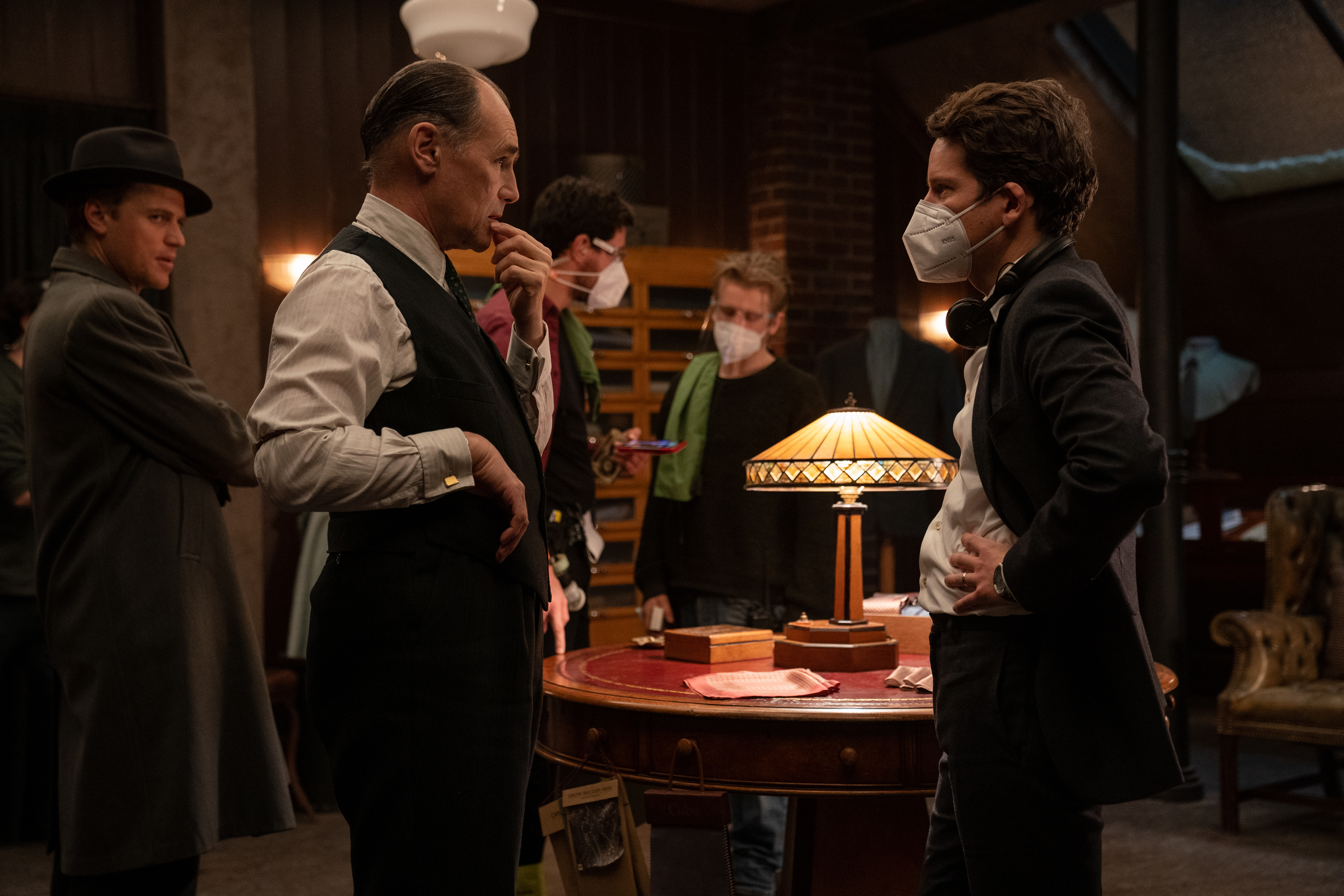 Though the film was filmed in London, it's set in Chicago, Moore's hometown. Working on the film, and working with Moore, also allowed Rylance to get back in touch with his Midwestern roots — Rylance was born in the U.K. but spent his formative years in Wisconsin. "I have a great love for that part of the country," says Rylance. "There's a certain beauty to the Rust Belt."

And though the film is a thriller with moments of extreme violence in it, including a tool that can only be described as Chekhov's shears, working on the film was a collaborative experience for Rylance. The entire film takes place in Leonard's shop, which makes for an intimate, collaborative work environment when shooting the film.

"Graham's a man of incredible manners, and I think that's why his screenplays are very good," explains Rylance. "He's very, very attuned. If he's saying something, and then anyone else starts to speak, he'll immediately stop and say, 'Please, I want to hear what you have to say.'" Rylance then notes, "There's this beautiful sense of manners and giving people space, which makes a very interesting background for a violent thriller."