In 2004, Dustin Lance Black set out to reclaim the story of Harvey Milk by interviewing all the people who’d known the out San Francisco politician back in the day. The remarkable story of how one of America’s first openly gay elected politicians rose to power only to be gunned down along with the city’s mayor George Moscone by Dan White in 1978 made national headlines at the time. Ten years later it was immortalized in the Academy Award®-winning documentary The Times of Harvey Milk. In 2004, however, Black had to work hard to get people interested in bringing this vital piece of American history to the screen. With Gus Van Sant onboard to direct and with a star-studded cast, including Sean Penn as the title character, Milk was released on November 26, 2008, to overwhelming critical acclaim. The film was nominated for eight Academy Awards®, including Best Picture, with Sean Penn winning for Best Actor and Black for Original Screenplay.

To celebrate Milk’s ten-year anniversary, we spoke with Black about what inspired him in the first place, the turbulent times that surrounded the film’s release, and why Milk still matters today.

The official trailer for Milk

How did you come to write the screenplay for Milk?

I cannot believe it's been 10 years. It was such a different time when I set out to tell Harvey Milk's story, a story that I had wanted to tell since I was a teenager in San Francisco. To me, it was a very hopeful and proud story. After seeing various people try to make it and fail, I set out to do it on my own. At the time, I was working as a writer on the HBO show Big Love. Every weekend, I would drive to Palm Springs or San Francisco to meet with people who were Harvey Milk’s friends, co-conspirators, and even those who knew him but didn't agree with him. From those conversations, I learned more about the man than I had from other books or documentaries and was able to construct an original story about Milk. 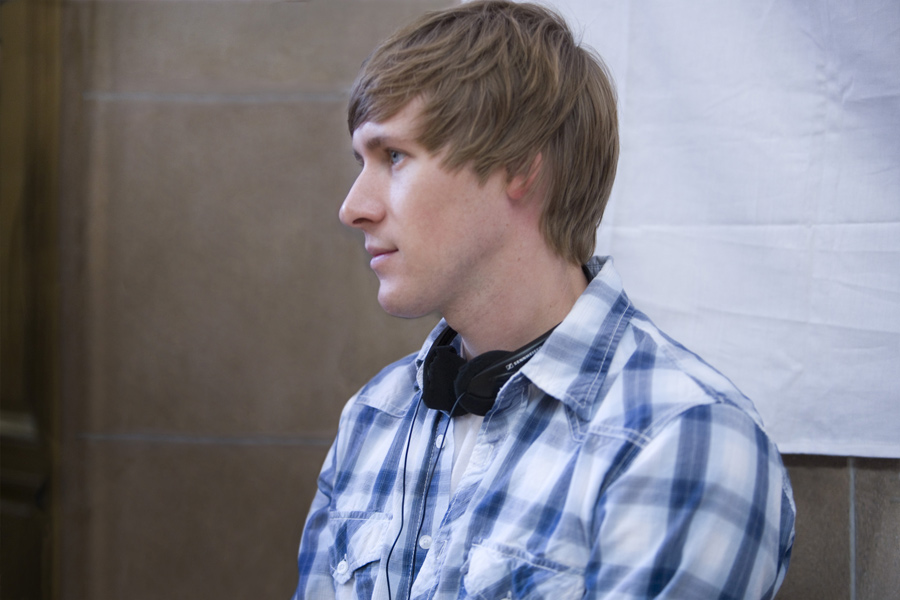 Milk screenwriter Dustin Lance Black on the set of the film

What was it like ten years ago making a film with a gay man as its hero?

It's hard to talk about how different the film and television world was with LGBTQ+ stories then. Things have changed so massively in 10 years. Back then, getting people interested in stories that just had an LGBTQ+ character was incredibly difficult, much less a story that took our lives seriously. A mainstream film that had LGBTQ+ characters at its core seemed impossible. There were a few exceptions. Will & Grace was one. Ellen [the TV sitcom] had come out but had been cancelled. And then there was Brokeback Mountain at Focus. Today there are LGBTQ+ characters all over television and movies. To get Milk made, we thought let's package it, get a cast together, and then take it to the one place that has proven they know how to do this and do it right. Let's take it to Focus Features. 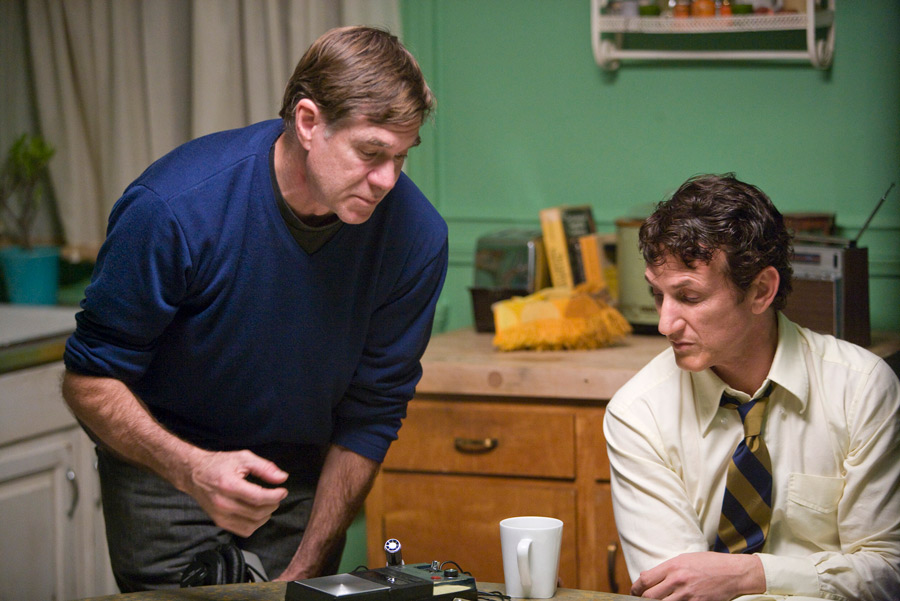 Did the film turn out the way you imagined it when you were working on the screenplay?

When I was writing it, I just wanted to depict the characters in a fair and accurate fashion. I wasn’t picturing any actor. But once it was done, as one of the film’s producers, I started to dream along with Gus [Van Sant] and [producers] Bruce Cohen and Dan Jinks about who might play these characters. Gus and I seriously considered Sean Penn after we watched a bunch of YouTube videos of actors giving political speeches. Obviously he is one of the great actors of our time, but he also had the fire and the humor that Harvey had. Since Penn lived north of San Francisco, we sent him the script hoping he knew about Milk and might be interested. He invited us to his house, where he asked me a lot of questions about how true it all was and about my research, which he wanted to see himself. Later when we were making dinner in his kitchen, he asked whether Emile Hirsch—who’d just starred in his own film Into The Wild—would be a good Cleve Jones. After agreeing with Sean’s suggestion, Gus hesitantly asked him whether Milk was something he might want to do. Sean just turned and said, "Why you think I had you up here? We're doing this."

Milk was great success. It received many awards, including an Academy Award® for Original Screenplay for you. Looking back ten years later, how did Milk change your life, both personally and professionally?

To be honest, Milk got me out of the film business for about half a decade. Milk came out in the same week that Proposition 8 [the California ballot proposition that eliminated the rights of same-sex couples to marry] passed. Gay and lesbian people who’d been getting married all summer suddenly found their marriages invalidated. At the same time, we had a movie about a California initiative against gay people [1978’s Proposition Six] where the gay folks actually won. After talking to a lot of activists and thinking the lessons learned from speaking to Harvey’s old pals, I got up on the Oscar stage to talk about how to bring marriage equality to young people across the country. The politically wise and self-respecting thing was to take our fight to the federal government and demand equality in all corners of our country. Being my mother's son, a good Southern boy, I knew that if I made a promise, I had to follow through. So for the next five years I pretty much stopped making movies. Together with people like Rob Reiner, Bruce Cohen and Chad Griffin, we sued the State of California in federal court asserting that gay and lesbian people have a constitutional right to marry. That was my follow-up to Milk.

Milk was released in a politically turbulent time. What do you think Milk meant to audiences back then?

So much of a movie’s impact has to do with things that are beyond our control. At the same time that we lost the marriage equality battle in California, I was coming out with this dream project about LGBTQ+ equality. That is certainly not what I wanted. Yet the two intersected in such a way that the film provided a solution for a real life problem. The LGBTQ+ equality movement had started making the very mistakes that Harvey spoke out against in the movie—only asking for crumbs of equality, letting straight people represent us instead of standing up for ourselves. For a lot of young people, Harvey Milk's life as depicted in the film provided them inspiration to fight back in a stronger and more vocal way, create collaborations with other social justice movements, and march for full equality in all states. Harvey’s life provided inspiration but also a road map. Ten years later it’s clear that the film was a significant part of getting people moving forward.

Today there’s a Harvey Milk day in California and a postal stamp of him. How do you think the film secured his legacy?

Before the movie, whenever I brought up Harvey Milk’s name outside of San Francisco, all I got was blank stares. Sure, a certain generation who lived in San Francisco knew who he was. In fact, many of them were quite disappointed that a mainstream depiction of his life had yet to come to fruition. The last time he was in the news was when the documentary [The Times of Harvey Milk] came out in 1984. Many feared his legacy was being lost, and for LGBTQ+ people, who already suffer from having no well-recorded history, it was a tremendous loss. Now people in London or Spain or anywhere in the world know who he is.

What does Milk mean for audiences today?

When we were making Milk, we doubted every day that our green light would last until we wrapped. Now I still see the film on planes and TV wherever I go. Every year, I am invited to dozens of screenings around the world to speak about Harvey Milk and why we made the film. For many, the film is increasingly being seen as the first part of a larger project to revive our lost history. So much of the rich history of the LGBTQ+ community has been lost. No, lost is too passive a word. Buried or destroyed is more accurate. In building on the success of Milk, we have to look to the diversity of the LGBTQ+ community, to look at all the different people who got us to where we are today.

Do you feel Milk’s genius for collaboration speaks to our divided time?

Milk saw politics as something that can only succeed as a collaboration. Today many people who are against progressive politics seek to pit different groups against each other with fear, pitting LGBTQ+ people against African Americans, for example. Milk was the opposite. He was great at creating alliances, often finding the most unexpected connections between different groups. Who would have expected the gays and the union truck drivers would have found something in common to work towards?

How do you think Harvey Milk would see what’s going on today?

I think Harvey loved a good fight. He certainly didn’t shirk from one. Today he would be out there looking for new ways to build coalitions between working people, between people who are struggling, and help them feel strong again. That is what he was best at. And he would do it with love in his heart and a lot of humor.