The passing of Supreme Court Justice Ruth Bader Ginsburg is a tragedy for the world. Nominated in 1993, Ginsburg, the second woman on the Supreme Court, served for 27 years, bringing a piercing intelligence and enduring wisdom in her jurisprudence. Before she sat as a justice, she stood before the Supreme Court fighting for women’s rights, arguing six gender discrimination cases—winning five of them. Over the years, she has become revered for her character and integrity as much as for her intelligence and achievement. "Ruth Bader Ginsburg gave us hope,” exclaims Felicity Jones (who played her in Mimi Leder's On the Basis of Sex). “She will be missed not only as a beacon of light in these difficult times but for her razor-sharp wit and extraordinary humanity. She taught us all so much. I will miss her deeply." To honor this legendary justice, Participant, Focus Features, and Magnolia Pictures are joining forces to re-release this Friday in theaters On the Basis of Sex and the documentary RBG, their films about the iconic Supreme Court Justice. Both film companies will be donating their net proceeds from the films’ theatrical re-release to the American Civil Liberties Union (ACLU) Foundation in support of their Women’s Rights Project, which was co-founded by Ginsburg back in 1972, with a minimum combined commitment of donating $50,000.

In the shadow of her passing, we return to the joy, honor, and deep gratitude that the people who made On The Basis of Sex felt about the woman and the Justice. Share how much Justice Ginsburg means to you with #ThankYouRuth.

"Closing Scene" of On the Basis of Sex with Justice Ruth Bader Ginsburg.

Ruth Bader Ginsburg changed the world, but she changed the world by persuading the people who disagreed with her as opposed to destroying them. What is crucial to understand about Ruth was how much she really reveres the Constitution and the law and the country. What I learned from her is what patriotism looks like.

Ruth Bader Ginsburg is leading the charge for all of us. Her legacy speaks to the #MeToo movement and the #TimesUp movement and to the cultural conversations of gender equality, gender parity, pay equality, and equal rights. It's not over. It's just beginning, but you can put a direct line to where it began. And it began with her. 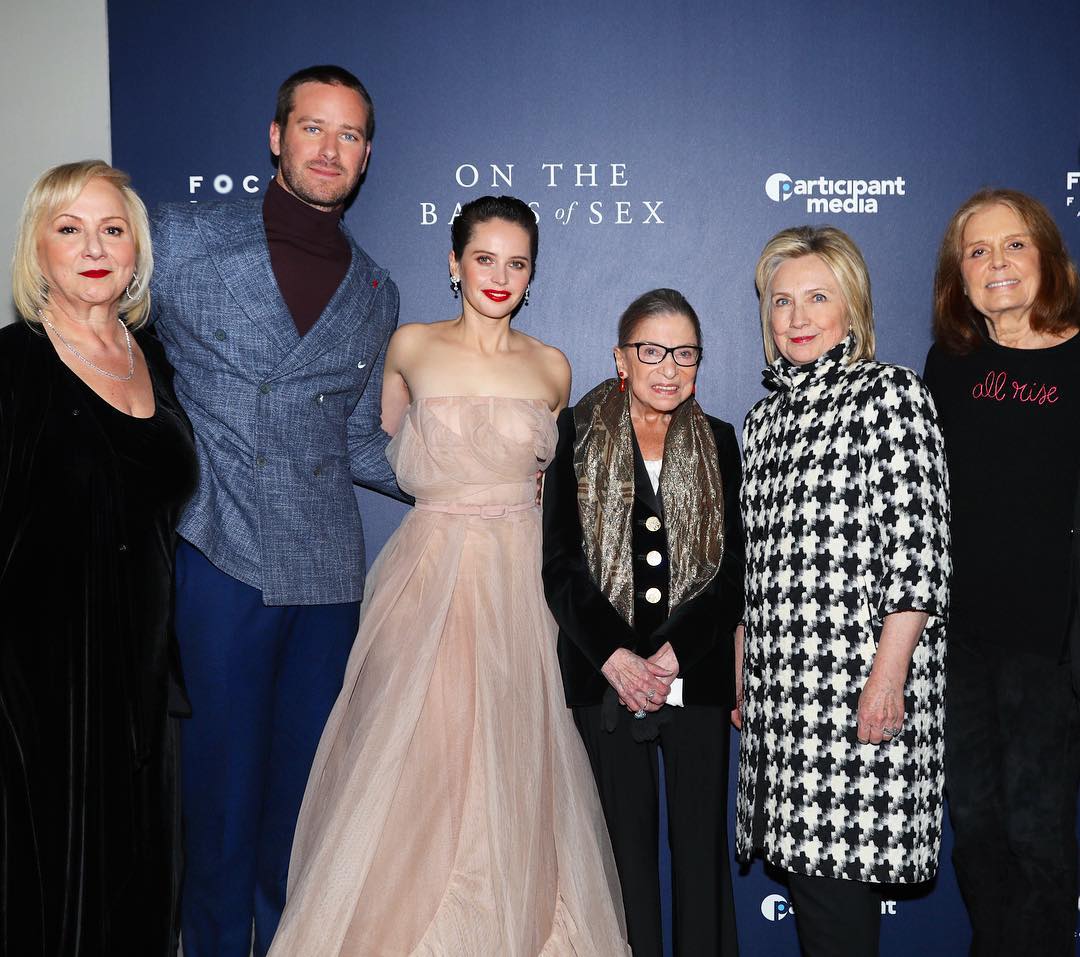 On meeting her: One of the strongest things that came through was that this woman has such humanity and takes absolute care over everything. There's nothing done in a glib or arrogant way.

She is unique and what she has accomplished for women throughout her career is nothing short of amazing.

What Justice Ginsburg did in her career, I take personally. The difference that she made for me in my life is extraordinary. I was lucky enough on this film to meet her and be in her chamber while I was dressing her for the final scene—and all I could think while I was with her was, “Thank you.”

When am I going to have the opportunity to show the depth of my gratitude for all she has done? I kept telling the crew we cannot fail Ruth. She has worked tirelessly her entire life for people she didn't even know.