Lesley Manville Lives by Her Own Rules

The star of Mrs. Harris Goes To Paris on Dior dresses and women’s rights.

As a working actor for almost 50 years, Lesley Manville has stepped into roles as varied as Phantom Thread’s demanding Cyril Woodcock and Maleficent’s good fairy Flittle. She’s donned period clothing for an adaptation of A Christmas Carol, and she’ll pop up as Princess Margaret in the next two seasons of The Crown.

In her latest role, though, Manville plays the indomitable Ada Harris in Anthony Fabian’s Mrs. Harris Goes To Paris. A straight-talking cleaner who falls in love with a Dior couture gown, Mrs. Harris scrimps and saves to be able to purchase her own. When she does manage to try and buy one, she runs into difficulties, but her scrappy personality and can-do attitude help her win over a few people that could just make her dream a reality.

We talked to Manville about the value of dreams, the plight of older women in the ‘50s, and how her own career affords her frequent looks into the lives of others.

Do you identify at all with Mrs. Harris?

She's in the area of people that I can sort of relate to and understand, because I had a working class upbringing myself. She's a very kind and warm and loving human being, and she's got this passion for a dress. I can completely understand that as well, because I've had dress cravings in my life at various times.

I don't need to completely understand a character in order to play them, because that's my job. I try my best to inhabit characters that may be a bit like me in some ways, but maybe not like me at all. But I can understand Ada pretty well. 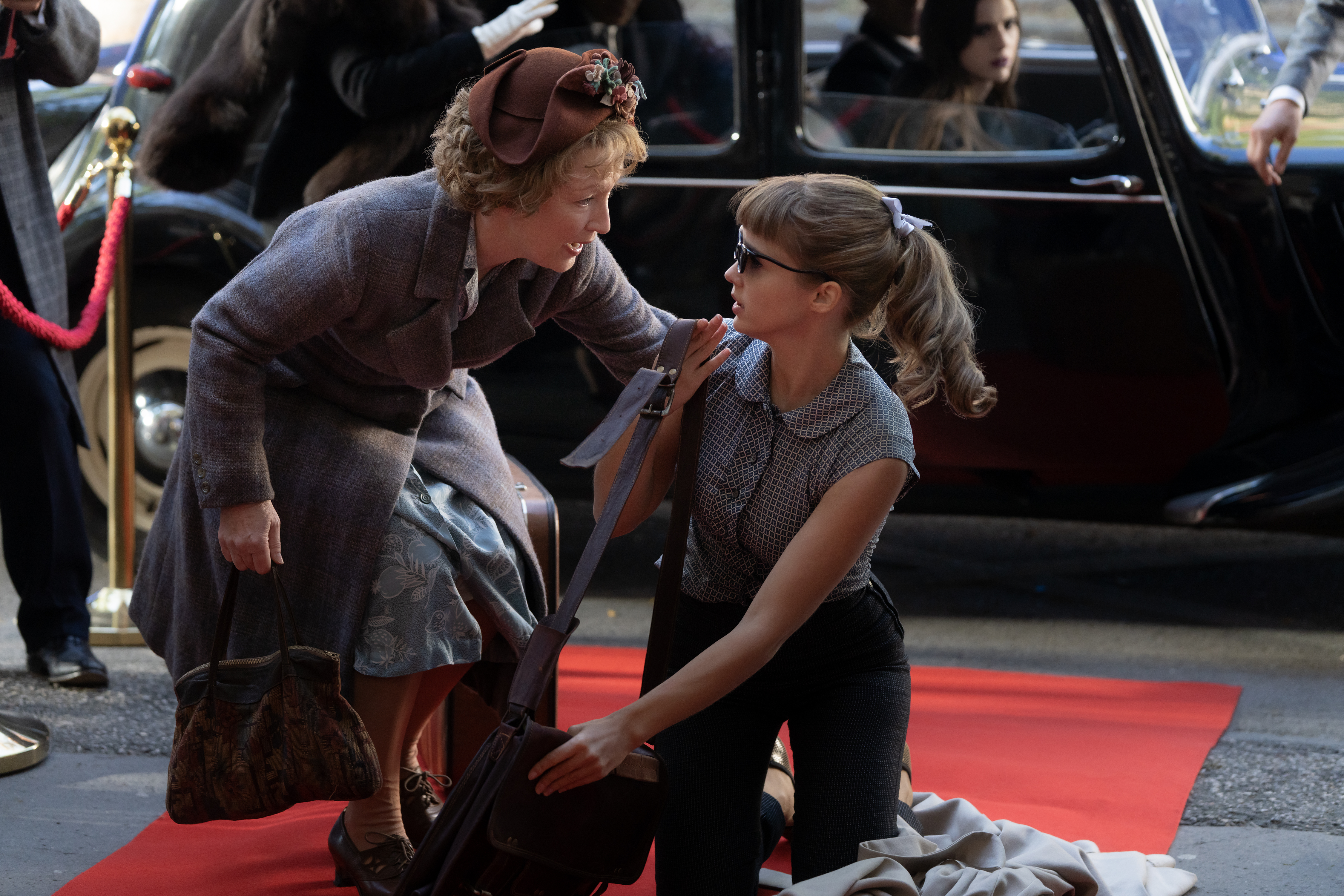 One thing that struck us about the movie is that though a lot has changed for women over the past 70-odd years, a lot has still stayed the same—especially when we’re talking about women of a certain age or women who choose to not have children. Did working on the movie make you think about women’s history at all?

Well, it's certainly been very slow. Every point, we win, we lose a few as well. It’s two steps forward, three steps back. So, yes, it's been incredibly slow.

Mrs. Harris says that sometimes she feels like the Invisible Woman and there are a lot of women feeling that way still. I think being 50 in the 50s was very different to being over 50 now, but I do think your sense of self can be easily eroded these days, as it was then.

The [Dior] dress is a dress, but it's also a symbolic thing for her. It's her trying to achieve something for herself. Now that she knows her husband is not coming back, she's allowed to navigate life on her own. It's a kind of mini mission that she goes on to try and get this dress.

I suppose in many ways, [Mrs. Harris] feels a bit less than visible.

The journey is also ostensibly about the dress, but it’s also about everything she went through to get there. If they’d just said “great, give us your money, here’s the dress,” would she still have become the new Mrs. Harris?

You’re right. It's not so much about the actual dress, although it is a thing of beauty. It’s about what she does to get there and what she does to other people. She's a very straight talking woman who doesn't edit herself, depending on the company that she's in. She’ll talk the same way to the milkman that she talks to Mr. Dior, but she affects people along the way. The people she comes across like her because she's making them see a side of themselves that they haven’t. That’s especially the case with Isabel Huppert’s character. By revealing herself, Ada helps other people reveal themselves as well.

You just mentioned that it was very different being over 50 in the ‘50s than it is today. How did working on this movie make you appreciate your own age?

I don’t know that it made me feel any differently about myself. I'm very comfortable as myself, and I'm actually enjoying being the age I am. I suppose I don't conform to people's archetypal idea of a woman. I can only live by my own rules.

I think there's more freedom now to be older and not feel that you need to conform to a certain set of rules just because you're getting older. Mrs. Harris certainly wouldn't have enjoyed that liberty. Although, having said that, Mrs. Harris is completely confident and comfortable in her own skin.

One of the touchstones of the movie is shooting for your dreams at any point in life, regardless of your circumstance. Did working on this movie make you feel invigorated in that sense? Did you decide to go out and learn Mandarin or anything?

No, because I'm fulfilling an awful lot of my ambitions within the work I do and the travel that it affords me. I don't need to do that because I don’t have a life where I feel the need to make it more interesting. It’s already interesting to me.

The thing about this job is that I'm lucky. I get to research all kinds of areas of life. Certainly, when I did Phantom Thread, I had brilliant people helping me access lots of information about the couture fashion world. We had these wonderful archivists at the Victoria and Albert Museum in London who were helping us and showing us archival clothing and fabric. That was really, really terrific, because I'm interested in clothes anyway.

With other parts I’ve done, I’ve researched whatever's pertinent to that job. For Princess Margaret in [the upcoming seasons of] The Crown, I read lots of books on her, and those books were fascinating and eye opening. Each job I do, I'm usually playing somebody who has a particular thing about them. For Long Day's Journey Into Night, the Eugene O'Neill play, my character was a morphine addict. There was some fantastic, very interesting research for that role, looking into addiction and particularly morphine addiction and what it does for you.

I'm not very good at doing things that are just purely for Lesley. Things that I think, “Oh, well, I'd like to take a cooking course.” In my line of work, I get to poke my nose into so many different areas of interest or areas of life, and sometimes very specific fields. All of my cravings are fed by my work.

Did you use any of the things that you learned on Phantom Thread about couture fashion in the ‘50s when you were working on Mrs. Harris Goes To Paris?

Well, I learned a great deal, but I needed to know that for Phantom Thread in a different way. In that movie, I’m the woman who runs the house with her brother, so, in a way, it was useful to have all of that.

Mrs. Harris doesn’t really understand the workings of high end couturiers. As you see in the film, she got on the plane with an empty suitcase, hoping that she can walk into the House Of Dior and just pick the dress up off the rail and come home. She doesn't really know very much about the processes that go into high end fashion, but she does appreciate beautiful things.