A Dude’s-eye view of the City of Angels

Joel and Ethan Coen's masterpiece The Big Lebowski begins with a voiceover explaining, “They call Los Angeles the City of Angels. I didn't find it to be that exactly, but I'll allow there are some nice folks there.” When a case of mistaken identity sends Jeffrey “the Dude” Lebowski (Jeff Bridges) on a madcap adventure to deal with a possible kidnapping, he meets lots of nice—and not-so-nice—people. He also discovers a side of Los Angeles well worth a second visit.  The Big Lebowski is about “Los Angeles in…the way Raymond Chandler’s stories are,” explains Joel Coen. The Big Lebowski’s Dude is just like The Big Sleep’s Philip Marlowe, notes Ethan Coen, “if he had lived in the Los Angeles of the nineties and been an avid bowler and a pothead." From the bungalows of Venice to the mansions of Beverly Hills, the Dude discovers a Los Angeles rich in architectural history, quirky characters, and local mystery. If you are in Los Angeles, you can follow Curbed's map of the film locations to see firsthand where the Dude abided. For Movie City: Los Angeles, we're taking a deeper dive into what makes these locations to the Dude and his fans.

The bowling alley where it all comes together

In many ways, the bowling alley where the Dude meets his pals, Walter Sobchak (John Goodman) and Donny (Steve Buscemi), slurps white russians, and bowls, is the epicenter of the film. To find the right one, location manager Robert Graf recalls, "We did a study of every bowling alley within 30 miles of Hollywood.” Eventually they located the Hollywood Star Lanes at 5227 Santa Monica Boulevard. “We wanted a certain size, a look that was a little retro but not rundown, with manual scoring tables, and we found it here,” remembers Graf. For people who wish to relive the movie's magic by bowling a few frames, we have some bad news. In 2002, Hollywood Star Lanes was torn down to make way for the Kingsley Elementary school. Before it disappeared, however, it made one last cinematic cameo in the Jon Favreau comedy The Big Empty. 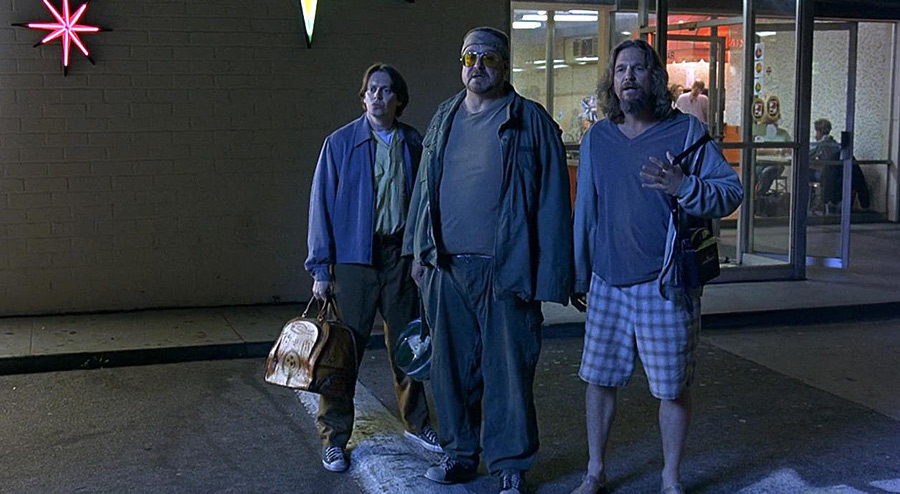 The Dude and friends before the Hollywood Star Lanes. 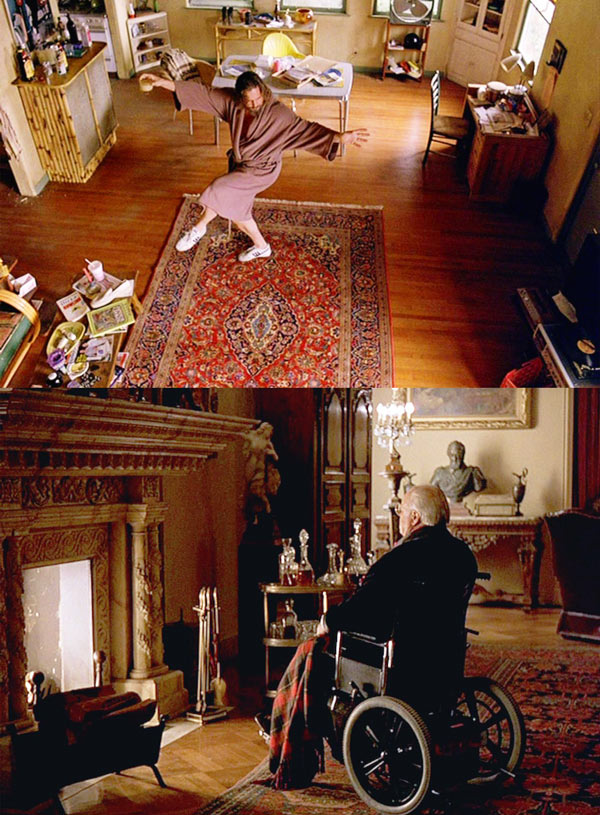 Above, the Dude in Venice; below, the (big) Lebowski in Beverly Hills.

Venice and Beverly Hills: a tale of two Lebowskis

In the film, the Dude lives in a snug bungalow in the boho seaside town of Venice. His shabby chic lifestyle is a lot more expensive today than it was at the time of the film. According to Zillow, the average home price in Venice in 1996 was $251,000. In 2012, the six-unit court which included the Dude's cottage went for over $1.5 million. The real millionaires like the other Lebowski (David Huddleston), however, live in Beverly Hills. To portray the wheel-chair bound philanthropist's lush estate, the filmmakers used two locations. A residence in LA’s posh Holmby Hills, just a few doors down from the Playboy mansion, was used to show off the estate's grounds and gardens. For the interiors, the film moved to the Greystone Mansion in Beverly Hills. Built in 1927, this palatial home filled with its own dark secrets provides the perfect backdrop to the film's noir tale.  Now owned by the city of Beverly Hills, the 55-room, 46,000 square-foot Tudor Revival landmark showcases the opulence of early Los Angeles with its massive hallways and ornate fireplaces. The estate also houses one of LA's most famous mysteries. In 1929, just after moving into the Greystone mansion with his family, the original owner Ned Doheny was shot to death by his good friend Hugh Plunket in an apparent murder/suicide. The reason for the crime remains unknown to this day. This LA landmark has starred in scores of films and TV shows from the 1963 sci-fi movie The Day Mars Invaded Earth to Paul Thomas Anderson's There Will Be Blood. 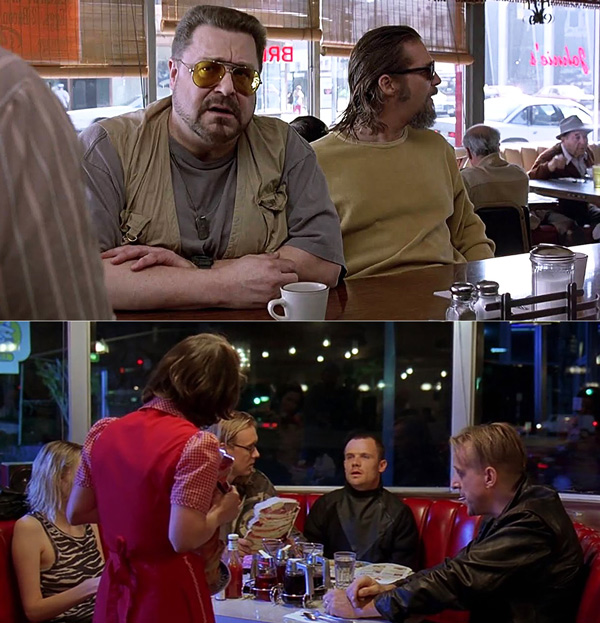 Above, John Goodman and Jeff Bridges make a scene at Johnie's Coffee Shop; below, the nihilists stop for pancakes at Dinah's.

No visit to Los Angeles would be complete without a visit to a hip fifties-style diner. Two LA landmarks were used to capture the city's diner culture. At Johnie’s, the Dude and Walter disrupt the restaurant's family feel by loudly reviewing gruesome aspects of the case. Built in 1956, Johnie's Coffee Shop (6101 Wilshire Boulevard) showcases the LA's homespun Googie architectural style, a space-age style that was popular in the 50s and 60s. The name itself comes from a diner named Googies which John Lautner designed in 1949. While no longer a working diner, Johnie's still shows up in music videos and films, like Reservoir Dogs and City of Angels. However, the film's other Googie-style eatery, Dinah's Family Restaurant (6521 Sepulveda Blvd), is open for business—in case, you're hungry. You can try their famous fried chicken or order some lingonberry pancakes like the German nihilists (Peter Stormare, Torsten Voges, and Flea) do in their famous scene with singer/songwriter Aimee Mann. 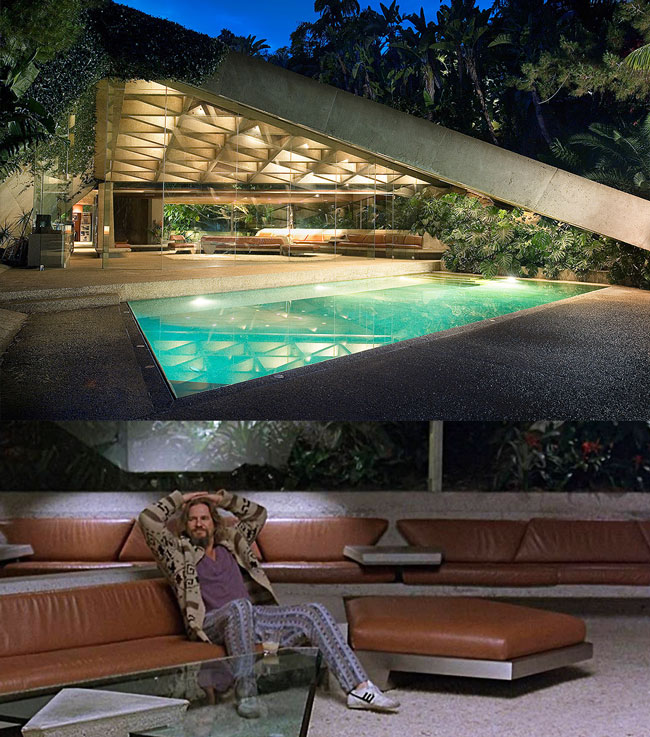 Above, the Sheats-Goldstein Residence (Jamesfgoldstein.com / Photo by The Very High Frequency Creative Agency); below, the Residence in The Big Lebowski.

For the villainous pornographer Jackie Treehorn (Ben Gazzara), the filmmaker chose one of LA’s most unique architectural gems, the Sheats–Goldstein Residence. Designed in 1961 by architect John Lautner, the building's poured-concrete geometric shapes built into the side of a hill exemplifies the designer’s southern Californian integration of organic form with natural surroundings. “It’s a playfully serious place,” explains production designer Rich Heinrichs. “We hardly had to do anything to it.” Perhaps more than any other LA architect, Lautner's designs have provided the luxurious lairs for movie villains in films from Diamonds are Forever (Lautner's Elrod House), to Body Double (Lautner's futuristic Chemosphere), to Lethal Weapon 2 (the Garcia House). For Heinrichs, "It’s the quintessential Los Angeles house because it’s fun...Things—fun and funny, or odd, can happen here.”  For the Dude, it was all three. 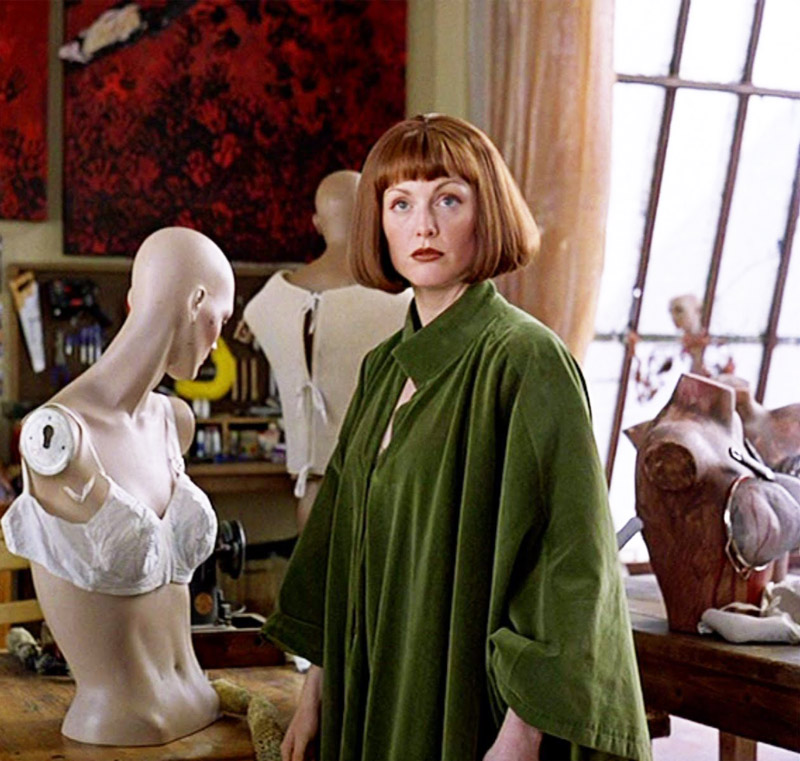 Maude (Julianne Moore) in her downtown loft above the Palace theater in The Big Lebowski.

The Palace Theater and the downtown art scene

In The Big Lebowski, the Palace Theater (630 S. Broadway) plays double duty. Its street-level theater doubled as the Crane Jackson's Fountain Street Theater, the community space where the Dude’s landlord stages his avant-garde dance performance. The Palace theater's fifth floor was refitted to create the spacious studio and loft where Maude (Julianne Moore) dreams up her grand feminist art pieces. If the space looks familiar, it also appeared in the film The Doors as a New York City loft space. The history of the once-grand, now-worn Palace Theater recounts in many ways the unique history of its neighborhood. Built in 1911 when the Broadway district was booming with hit vaudeville shows, the Palace was a crown jewel in LA's glittering theater district. But as movies replaced live acts, the Palace was transformed into a film-only venue in 1926. Over the years, as the neighborhood grew a little frayed around the edges, the theater's idenity also changed. It slid from showing first-run movies and premieres to presenting newsreel and second-run films to finally becoming a downtown grindhouse venue. 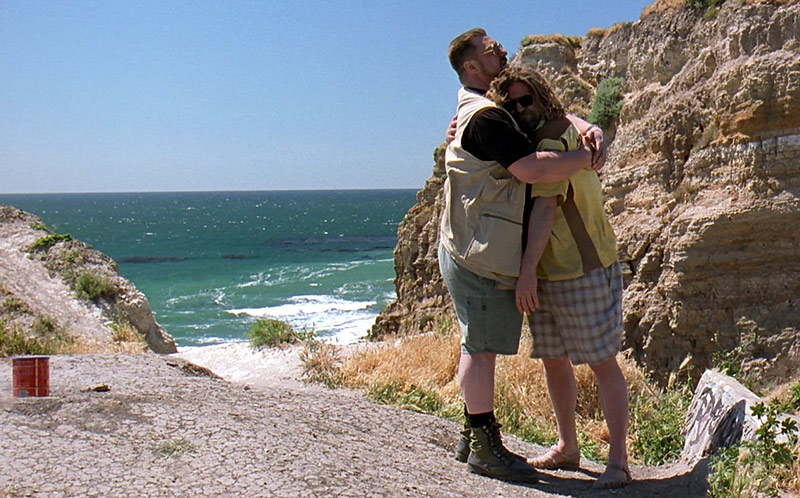 Walter and the Dude at San Pedro’s Sunken City in The Big Lebowski.

What movie set in Los Angeles would be complete without a beach scene. In The Big Lebowski, there are two beach locations. The first one is the setting for a Jackie Treehorn’s carnivalesque beach party, right next to his swanky Malibu home. The actual location for his extravaganza was Point Dume State Beach, a popular park that runs northwest of Point Dume, the large promontory that juts into the Pacific Ocean marking the northern boundary of the Santa Monica Bay. In another scene, Dude and Walter visit the beach at San Pedro’s Sunken City. Located in Point Fermin Park, the striking outcropping has a twisted history perfectly in tune with the film's noir bent. In 1929, a landslide sent several homes from a new constructed luxury housing development into the Pacific Ocean. The tangle of broken foundations, cut-off streets, and lost sidewalks that remained were named "Sunken City." While officially off limits, the cliffside landmark has become a mecca for graffiti artists wanting to make their mark.