One of the best locations for capturing the grandeur and wildness of the American West turns out to be in Canada. For more than a century, Alberta has provided filmmakers an extraordinary cinematic backdrop. The Canadian province nestled between British Columbia to the west and Saskatchewan to the east combines a dizzying array of cinematic landscapes. “Within an hour-and-a-half to two-hours driving distance from Calgary, I can take you from 9,000 feet up in the mountains (where you are at snow level) to deserts and everything in between,” explains location manager Edsel Hilchie in theReel Destinations episode for Let Him Go. “And in that same distance, there are tons of small towns.” To celebrate Robin Wright’s directorial debut Land, which was shot in the mountains west of Calgary, we’re heading north for a look at Alberta, the place where Land, Ang Lee’s Brokeback Mountain, and Thomas Bezucha’s Let Him Go were shot.

Watch Land now in theaters — and On Demand starting March 5. 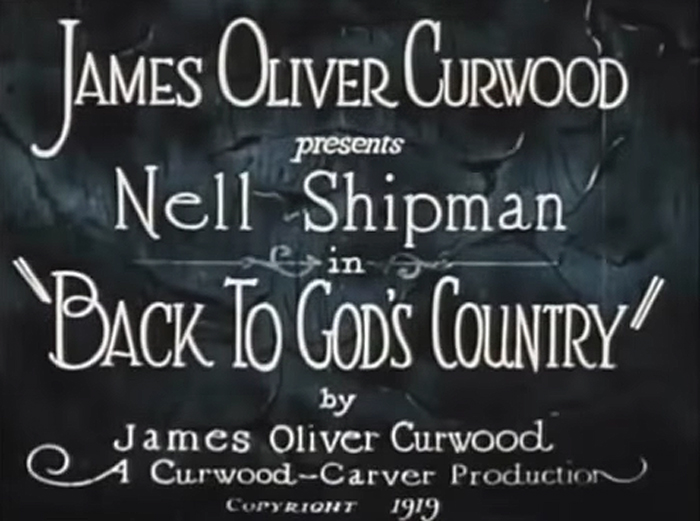 The title card for Back To God's Country.

In 1919, film producer Ernest Shipman, who’d already made a name for himself and a small fortune making movies in the US, returned home to Canada with his wife, the actress and writer Nell Shipman, to shoot Back to God’s Country. The film’s gripping melodramatic story, spectacular landscape, and early nude scene turned it into Canada’s top earning silent film of all time. It also put Alberta on the map as a film location. While several Hollywood productions traveled north to shoot select scenes or capture landscape shots, it wasn’t until the late fifties that Alberta became a hot spot for Hollywood productions. In shooting his 1958 Western, River of No Return, with Marilyn Monroe and Robert Michtum, director Otto Preminger arrived on set remarking, “I guess it doesn’t really matter where I point the camera. We are absolutely surrounded by scenery.” The stunning backdrop was not lost on viewers. The New York Times review quips, "It is a toss-up whether the scenery or the adornment of Marilyn Monroe is the feature of greater attraction.” Since then filmmakers have returned to Alberta, knowing the beauty of the location would enhance any story they chose to tell.

Needing a location that could capture both the beauty and brutal indifference of the wilderness, Land’s production team landed on Moose Mountain. The nearly 8,000-feet-high peak, which was named in 1949 for resembling a resting moose, is one of the treasures of the Canadian Rockies. About 35 miles from downtown Calgary, the summit is one of the closest peaks in the Kananaskis range of the Canadian Rockies, as well as a favorite destination for serious hikers and mountain bikers. Moose Mountain proved a perfect location for Land because of its natural beauty and because, according to Wright, it “boasts the most extreme, unpredictable weather patterns I’ve ever encountered.” In the film, Edee Holzer (Wright) escapes to a cabin in the middle of the wilderness in order to rediscover herself. “Land is a story of hardship and development and resiliency so the location couldn’t be pretty to a fault," explains production design production designer Trevor Smith about the choice of Moose Mountain. “There had to be a grit to it and a bit of snarl in the wilderness.” 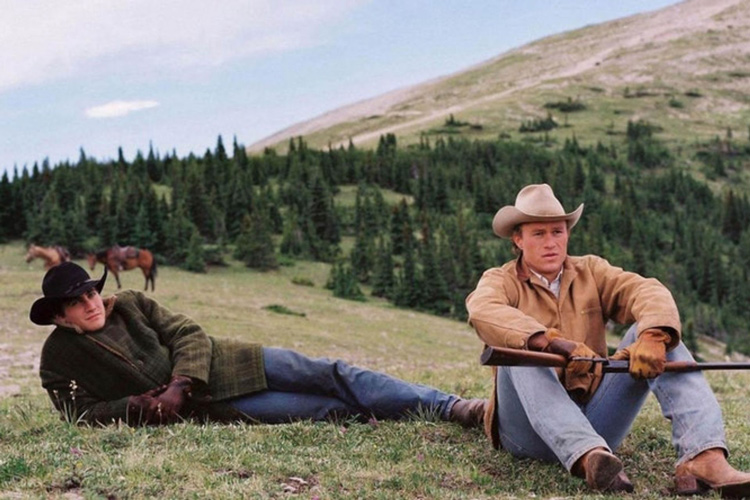 While Brokeback Mountain supposedly takes place in Wyoming, the production team decided that the Canadian Rockies were a better locale for their fictional summit. To create the movie's title mountain, the filmmakers shot and edited together several well-known local geological landmarks, including Windtower summit,  The Three Sisters peaks, The Fortress, and Moose Mountain. For Brokeback Mountain's unit production manager Tom Benz, what made Moose Mountain “ideal for our use is that it's a mountain that literally stands on its own.” The location also saved the day by providing one of the few places where the Alberta Wildlife Department would allow the production to shoot Ennis (Heath Ledger) and Jack (Jake Gyllenhaal) herding sheep. “Because the sheep carry bacteria that can wipe out wild cloven hoof livestock,” recalls location manager Darryl Solly, “the authorities suggested that we look at Moose Mountain.” To make sure the American sheep were kept separate from the indigenous wildlife, the sheep were trucked up every morning and then driven down each night.  While the mountain’s barren face, high above the treeline, served a pragmatic goal in keeping the sheep separate, its majestic silhouette also produced some of the film’s most memorable scenes. 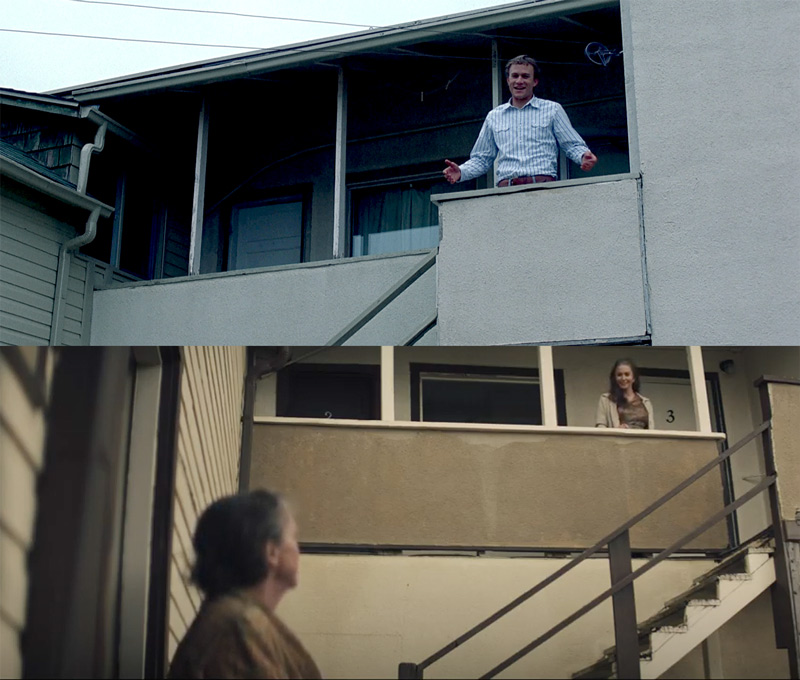 Top, Heath Ledger in Brokeback Mountain; below, Diane Lane in Let Him Go.

For people seeking to return to the past, Alberta has a number of small rustic towns that can easily double for life in the 1960s. An hour-and-a-half drive south of Calgary places you in the town of Fort Macleod, a frontier town that has provided locations ranging from 1921’s Cameron of the Royal Mounted to Brokeback Mountain to, most recently, Thomas Bezucha’s Let Him Go. Built in 1874, the Fort first provided an outpost for the North West Mounted Police, later growing into an active agricultural center when the railroad came to town. While Fort. Macleod can boast of being the birthplace of singer/songwriter Joni Mitchell, it is not a place where much has changed architecturally, making it the perfect place to double as a dusty western town in the 1960s. Brokeback Mountain used a variety of locations throughout the town. The Town Hall was the place where Enis (Heath Ledger) and Alma (Michelle Williams) get divorced, where Ennis and Cassie (Linda Cardellini) meet at the Queen’s Hotel, and where Enis hangs out at the coffee shop next to the Greyhound Bus Station. Perhaps the town's most famous location is at 2422 3rd Avenue,  where Alma and Ennis share an apartment over a laundromat and Jack (Jake Gyllenhaal) and Ennis reconnect .

Let Him Go also found Fort Macleod a perfect double for a 1960s western town. “It has a great look to it. Has a period feel to it,” exclaimed location manager Edsel Hilchie. “All the brick buildings, and two three-story storefronts.” In Let Him Go, Fort Macleod served multiple purposes. It doubled as the town of Bentrock, providing both a diner and liquor store that George Blackledge and his wife Margaret (Kevin Cosner and Diane Lane) visit. In a nod to Brokeback Mountain, Let Him Go used the location of Alma and Ennis' laundromat apartment as the home of Lorna (Kayli Carter) and Donnie Weboy (Will Brittain) in Dalton, Montana. 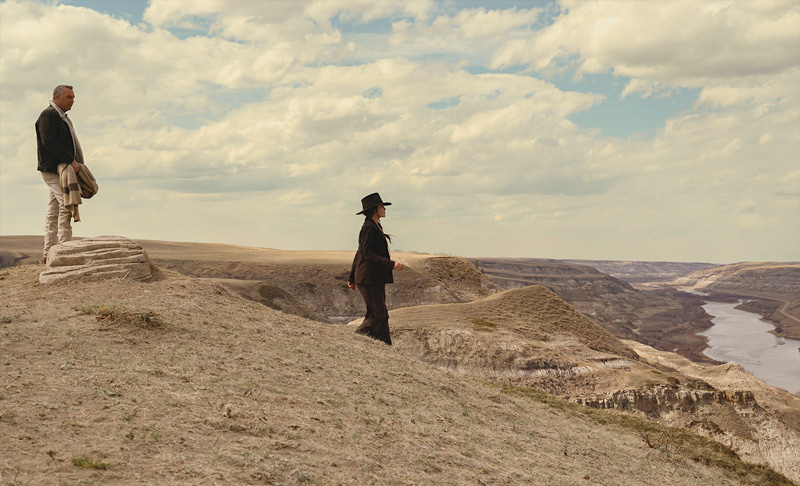 As the Blackledges drive from the green fields of Montana to the brown, barren badlands of the Dakotas in Let Him Go, the filmmakers needed a landscape that could reflect the mood of the story. “We shot a lot of that in Drumheller in the Dorothy region of Alberta, an area that is characterized by the Hoodoo barren valleys, glacial channels, and ripped ridges,” recalls production designer Trevor Smith. “It was just absolutely spectacular, white as far as you could see, nothing like the brown you see today,” expressed producer Paula Mazur. “We just knew we were going to get this vast, big sky look that we were needing.” The area around Drumheller provides attractions for visitors and filmmakers alike. Geological formations called Hoodoos are eerie sandstone towers that rise out of the barren landscape like strange alien beings. Formed by erosion over centuries, the spires usually consist of a soft rock tower that balances a harder, often tent-shaped rock on top. The landscape around Drumheller also hosts Dinosaur Provincial Park, a UNESCO World Heritage Site that marks the area where scores of fossils have been recovered. While most of the dinosaur bones have been shipped to museums and institutions around the world, one can get a sense of what the area was like when dinosaurs roamed through Alberta by visiting Drumheller’s Royal Tyrrell Museum of Paleontology.