Only Connect: The Many Lives Of Miranda July

In her latest film Kajillionaire, writer/director Miranda July focuses on a family of hucksters—Robert (Richard Jenkins), his wife Theresa Dyne (Debra Winger), and their adult daughter Old Dolio (Evan Rachel Wood)—who patrol Los Angeles' less-glamorous neighborhoods for the next scam. Despite the surreal settings and oddball characters, Kajillionaire is ultimately less about con jobs than, as The Hollywood Reporter points out, “the need for warmth and human connection.” As an artist, July uses a wide array of media—performance art, fiction, recorded music, film, sculpture, and even social media—to express herself. In all these works, she often returns to, notes Vulture, “is a search for human connection in all its weird, sticky intimacies.” Indeed, her work doesn’t simply explore the theme of connection, but often facilitates it through her interactions in performance, over the internet, and through personal correspondence. Her first play The Lifers (1992), for example, was created from the real-life pen pal letters she exchanged with a prisoner doing life for murder. For a recent installation in London, she created an interfaith charity shop at Selfridges Department Store.

With Kajillionaire in select theaters this Friday, we wanted to pay tribute to July’s a many splendored career and the way it reminds us to connect with one another. 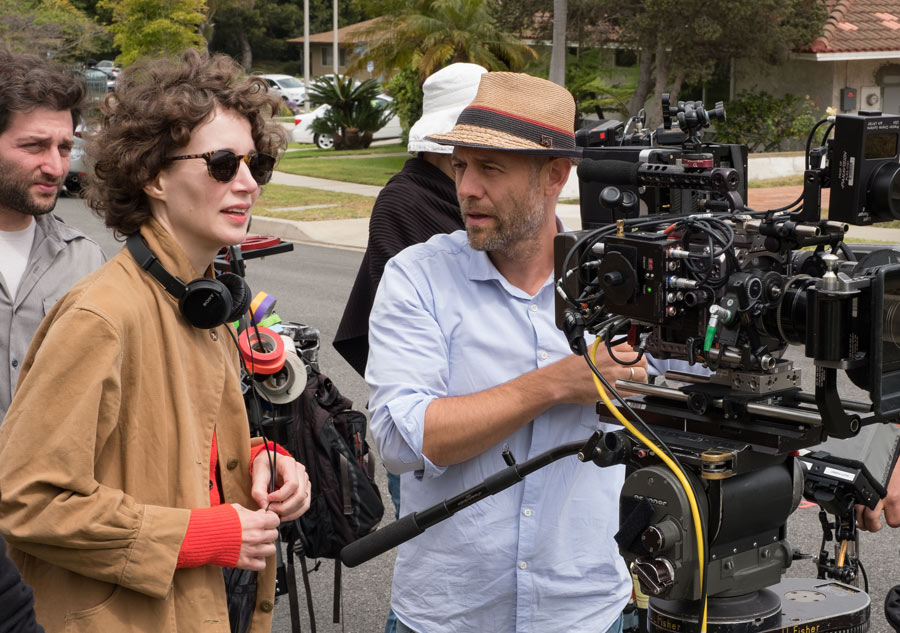 Miranda July with director of photography Sebastian Wintero on the set of Kajillionaire.

As a filmmaker, Miranda July showcases the complex, careful, and often comic ways we try to connect with each other. Her three feature films—Me and You and Everyone We Know (2005), The Future (2011), and now Kajillionaire—present unique characters dealing with strange situations in very human ways. With Kajillionaire, July is heralded by Variety as “One of independent cinema's most singular voices.” While filmmaker may not be July’s sole identity, it remains her first love. “I was a high school student who wanted to be a director,” explains July, adding, “filmmaking is the thread for me, it’s certainly where I started.” 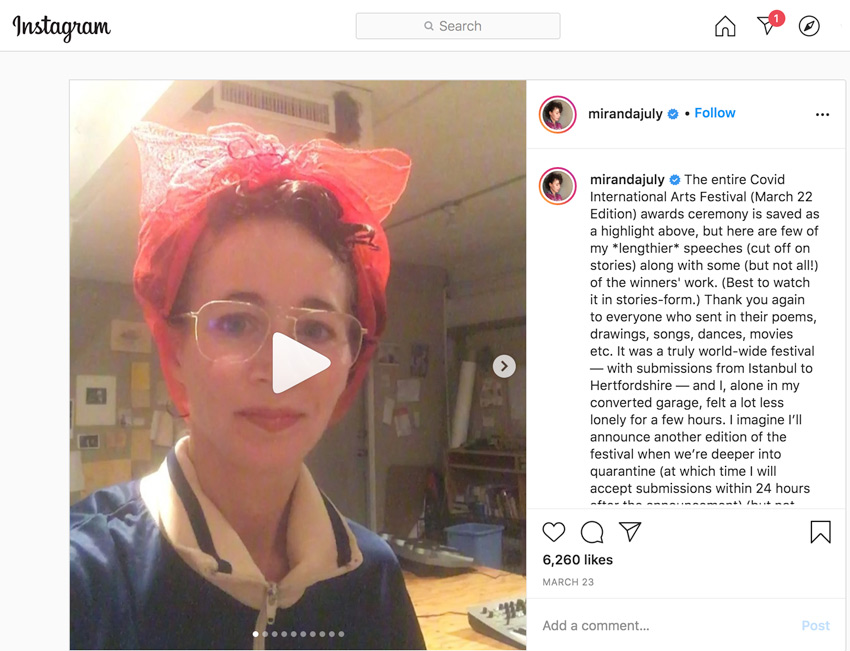 July's first foray into filmmaking was not by exploring the theme of connection but rather by connecting different women filmmakers. In 1985, she created Big Miss Moviola (soon renamed Joanie4Jackie), a sort of video chain letter where women sent in their own films and received back a compilation videotape. The instructions stated, "A Challenge and A Promise: Lady, u send me yr movie + $5.00 & I'll send you the latest Big Moviola compilation (that's 10 lady-made movies including yrs)." July later described it as “one way we could see each other's work and know we weren't alone."  Recently she launched the Covid International Arts Festival on Instagram. Recalling her Joanie4Jackie days, this new project allowed her to relive "the joy of discovering someone else’s work and looking at each submission...that was a very familiar and comforting feeling.”

Nearly all of Miranda July’s creative works display a degree of performativity. From films to performance art, fashion shoots to Instagram poses, she morphs into different characters and identities, not the least being the role of the artist Miranda July. Like with many projects, July turned the art of acting into a communal  DIY adventure. She relates in The New Yorker how in Portland in 2002, she and Carrie Brownstein gathered a “group of friends together—maybe ten people, meeting at each other’s houses. One of us would go to the library and get a book and bring in an acting exercise and present it to the class, and then we’d all do it.” In addition to acting in many of her own films, she appeared along Brownstein on a 2012 episode of Portlandia, as well in the feature film Madeline's Madeline for which IndieWire wrote, “July is brilliantly cast against type as someone who desperately lacks the ability to express herself.” 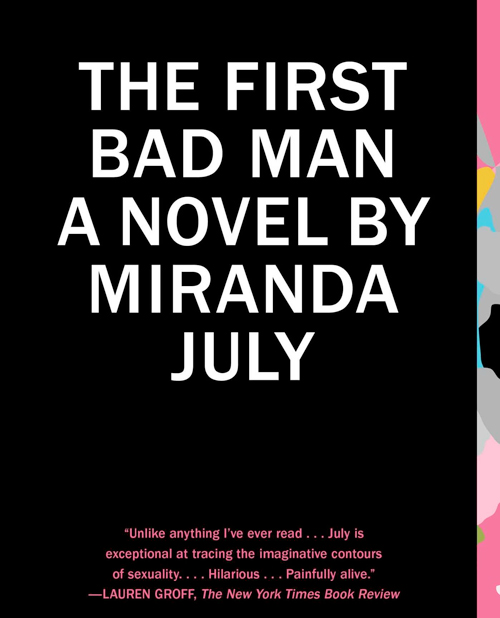 With her collections of short stories No One Belongs Here More Than You (2007) and her novel The First Bad Man (2015), July has proven herself to be one of the most interesting new voices in American literature. The writer George Saunders noted, “If I ever start to doubt the power of language and intelligence, I only have to read a few lines of July to have my faith restored.” But even in pursuing one of the loneliest jobs around, July has found new ways to connect with others. For her 2011 book It Chooses You, July worked with photographer Brigitte Sire to track down random sellers who hawked their prized possessions in the classified paper PennySaver to learn about the person behind the object. One of the book's subjects was eventually cast to be the voice of the Moon in The Future. 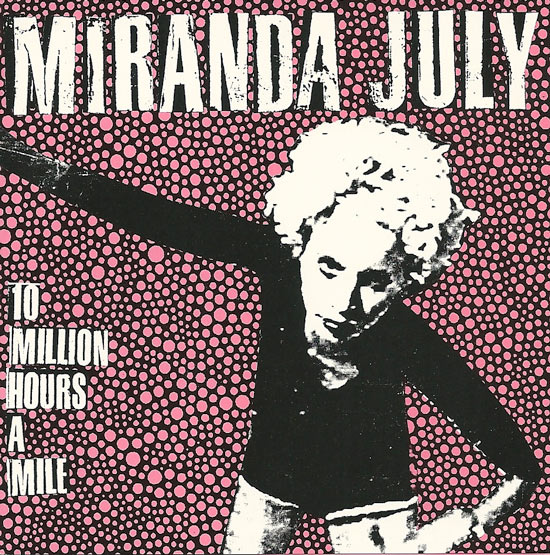 The album cover for 10 Million Hours a Mile.

In the 1990s, Miranda moved to Portland during its Riot Grrl music scene. In addition to working with local bands, including The Need and the CeBe Barnes Band, July produced two music/spoken word albums for the Kill Rock Stars indie label.  In 10 Million Hours a Mile (1997), July performs a series of monologues with musical accompaniment that Dazed called a “terrifying barrage of hypnotic and downright scary tales.” On her next album The Binet-Simon Test (1998), “chilling electronic soundscapes, provided by Donovan Skirvin… reflect the disturbing atmosphere created by July's performances,” according to MTV. Like films without images, both albums narrate the strange, unforgettable worlds that would become visible in her later works.

July’s early days performing on stage with bands eventually evolved into her creating her own full-length performance pieces. With each new piece, July expanded the borders of the stage and role of the audience. In 1998, she created what she called a “live movie” with Love Diamond, a multimedia presentation in which she plays various characters with the audience participating. Her 2006 piece Things We Don’t Understand and Definitely Are Not Going To Talk About tells the story of a messy breakup but with the audience being invited onstage to play the major parts. In describing the work, July highlights how “I think that the audience and I are both aware of how it is a rare and exciting thing that we are all in the same room together for this one night.” Most recently, her 2015 immersive theater piece New Society invites the audience to join her to literally create a new world order by drafting their own constitution and composing their own anthem. 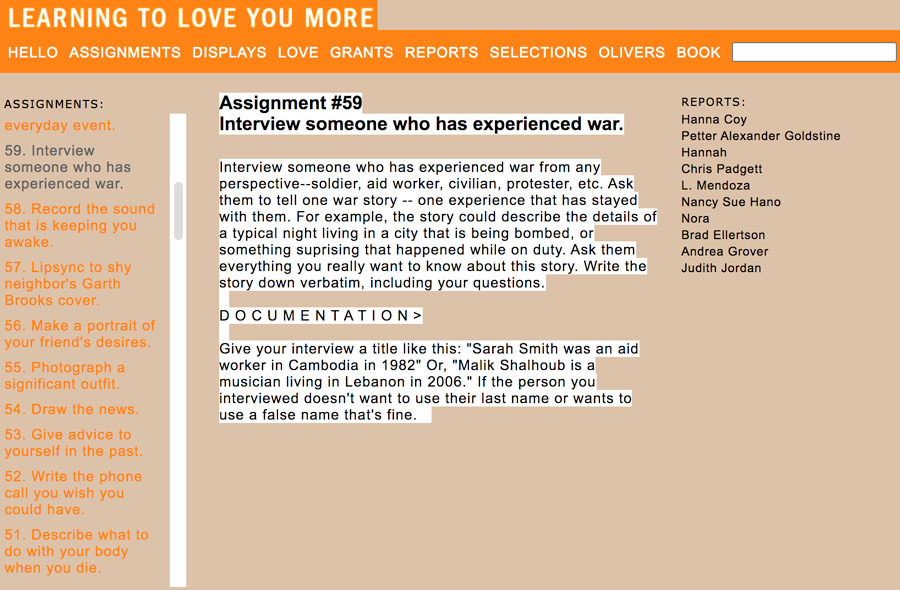 For Miranda July, social media provides not simply a new platform and paintbrush, but an even more interesting way to connect to others. On the web project, Learning to Love You More, which July co-created with Harrell Fletcher, over 8,000 people posted original art in response to specific prompts like, “Take a picture of your parents kissing” or “Interview someone who has experienced war.” In 2014, she created the app Somebody, which the site promoted as “the "antithesis of the utilitarian efficiency that tech promises." Rather than send a message digitally, the app sent it to someone near who would then need to deliver it to you in person. In her recent installation “I’m The President, Baby” at the Victoria and Albert Museum, July worked with an Uber driver to create a piece that illustrates the Nigerian man's insomnia and isolation by letting audiences imagine his use of WhatsApp, Uber, and Instagram.