What we know (and love) about the breakthrough star of Loving

Since Jeff Nichols’ beautiful film Loving debuted at the Cannes Film Festival in May 2016, the buzz about Ruth Negga has been growing steadily. After receiving an Oscar nomination this week for best actress in a leading role, that buzz is swelling to a clamor.

We are not surprised: Her performance as Mildred Loving, whose name has became synonymous (along with husband Richard Loving, played by Joel Edgerton) with marriage equality laws through a landmark Supreme Court case in 1967, is unforgettable. Throughout the film, Mildred’s love, determination and unbending strength come across through just a glance or a quiet gesture from Negga. She captures the real-life 1950s Virginian housewife with uncanny exactitude.

Between now and the Academy Awards on February 26th, the world will be waking up to the wonders of Ruth. To help satiate the inquiring minds just discovering her gifts, here are a few things we have learned about the 35-year old Irish-Ethiopian actress since we’ve had the pleasure of working with her this past year.

Negga spoke to the LA Times about how she brought Mildred Loving to life for the film, saying she paid special attention to her voice. “She had a very specific accent,” says Negga. “It was a very different time. People, especially this couple, were very reticent and shy about speaking in public."

“I recorded her voice from the documentary [HBO's The Loving Story] and just listened to it for two years,” she says shaking her head with a laugh, “because that was the time period from when I auditioned for it to when we shot.”

Mildred has “spine” –- and so does Ruth

Though never one to give less than a hundred-and-ten-percent, Negga has confessed that she doesn’t savor all the media attention she’s been getting lately -- something perhaps she shares with the real Mrs. Loving.

“I use the term 'spine' for people when I think that they may seem on the surface sort of reticent, shy, self-deprecating, shying away from the spotlight. Quiet.” Negga told GQ. “But don't mistake that for a lack of confidence. Because somewhere in that body, both physically and mentally, there's a real steel thread of certainty about who they are and their confidence in themselves.” 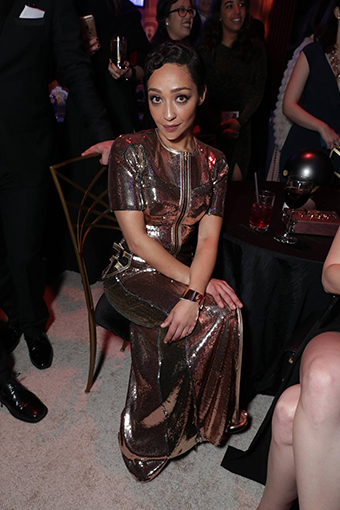 Ruth Negga at the 2017 Golden Globes

The fashion world is love in with her

From the Suno dress she wore to the Cannes Film Festival, to the custom made Louis Vuitton gown she donned for the Golden Globes, Ruth Negga has been wowing the fashion world.

That night, when asked about her Louis Vuitton gown, she said: "When an artist, a creator, a genius custom-makes something for you, it's extraordinary,” Negga shared to InStyle, "It feels like it's the nicest thing I've ever put on my skin. It's the most beautiful thing I've ever seen."

Needless to say, all are eager to see what Negga and her stylist, Karla Welch, choose for the 26th.

Fans of Negga's demure performance in Loving may be surprised to learn that she also plays a rather lethal pixie named Tulip O'Hare on the AMC series, Preacher.

Crowned a "badass femme fatale," the Daily Beast describes the character as "powerful and vulnerable, funny and sweet, a little bit mad, and effortlessly stylish." Or as Ruth puts it, "She’s sort of unforgettable. She has no morals. She’s an agitator assassin, a gun for hire," she told The Guardian. "And she’s written the way male characters are usually written." Though Negga has great fun playing this unpredictiable protagonist, there is one aspect of the role's training that has bled into her real life.

Of all of the amazing events and appearances that have happened on Negga’s journey with Loving, she is most proud that the film was the first full-length feature to be screened at the new National Museum of African American History and Culture.

As she explains, “The film is reminding us that there’s a conversation that we need to be having still.” 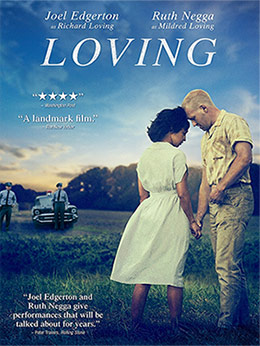 Want to know more about Ruth?

Here are a few of our favorite stories that explore her magic.

Who is Ruth Negga? on people.com