In Edgar Wright’s Last Night in Soho, Eloise (Thomasin McKenzie), a young fashion student, travels to the Soho neighborhood of London to begin her training. Being there, however, provides her with a whole different education when she is pulled back in time to the 1960s. There, she connects to a young singer, Sandie (Anya Taylor-Joy), with whom she shares a strange psychic connection. Only when the bright daydreams of the swinging sixties begin to darken does Eloise fathom what is really at stake.

To create the cinematic sleight-of-hand needed to take Eloise back to the past, Wright turned to visual effects supervisor Thomas Proctor. Having worked on effects for films such as The Matrix and Fantastic Beasts: The Crimes of Grindelwald, Proctor had experience with the full bag of tricks necessary to accomplish whatever Wright asked of him. Sometimes, however, the best trick is none at all, as much of the magic was created by a remarkable coordinated effort between the performers, the set designers, the camera department, and the effects people. In the end, the production teams infused the sets with both the dreams and nightmares of the 1960s. As Backlot Magazine noted, “The visual style and art direction at play are jaw dropping at times, bringing to life a London that feels filled with possibilities while also being a place filled with malice resting just below the surface.”

We spoke with Proctor about working with Edgar Wright, finding creative solutions for the film’s astonishing effects, and recreating Soho in the sixties.

Get tickets to Last Night in Soho now. 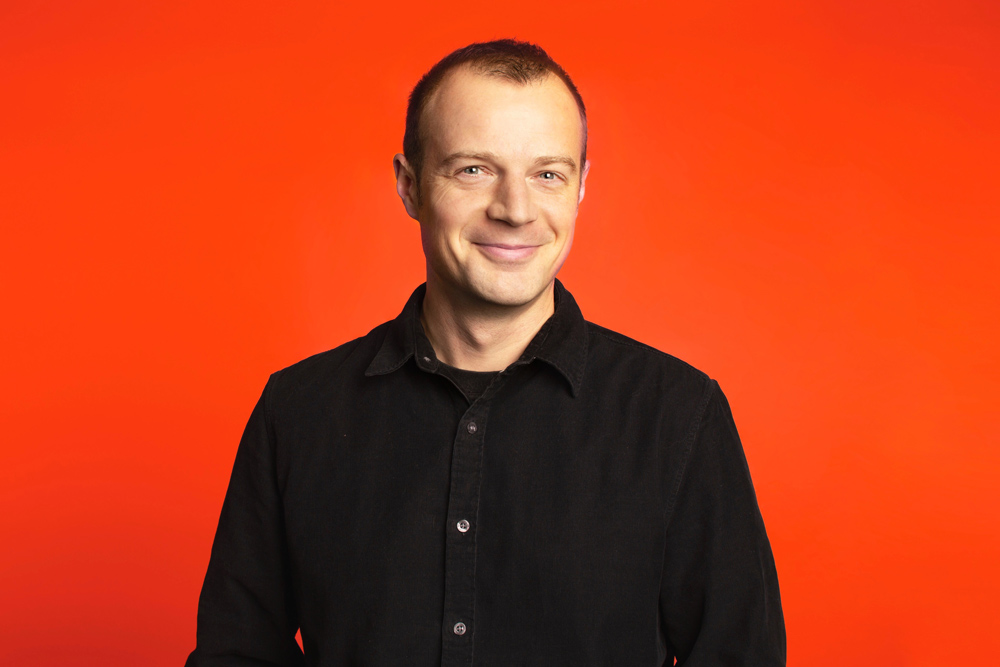 How did you get involved with Last Night in Soho?

I am a visual effects supervisor for the effects and animation studios DNEG [Double Negative]. We had previously done some horror work on Gore Verbinski's A Cure for Wellness. So Last Night in Soho seemed like a good fit. In our original meetings, we hit it off with Edgar in our discussions about the '60s, the film's music, and the cinematic references — some of which were familiar to me but mostly were new territory, like the Italian Giallo films. The script, of course, was really intriguing.

When you read the script, what did you see as your chief creative challenges?

There were a few. Right off the bat, I felt that creating the shadow men was going to be a real challenge. The period enhancements, like a 1960s version of Piccadilly Circus, posed a challenge. At the time, I anticipated that we would be able to film in contemporary Piccadilly and set the clock back. It turned out we had to create the entire area digitally. I was really excited by the mirror gags. I think the mirrored scenes would be the most interesting because they were to be a collaboration between all the different departments.

What sort of creative direction did you get from Edgar Wright?

He has so many film references to draw from. For me, it was a real gift watching all these movies that Edgar recommended. For the shadow men, he provided excellent concept art from the art department (that included work from Marcus Rowland and Edgar’s brother Oscar Wright). Their artwork really helped us find the dreamscape the audience sees at the end of the film.

In the films you watched, which ones most inspired you?

A few of the Mario Bava films, especially Blood and Black Lace. It has very strong stylized lighting which helped inform the lighting in the film. Also a few Dario Argento films which I somehow hadn't seen, like The Bird with the Crystal Plumage and Profondo rosso (Deep Red). I’m a British citizen, but I wasn't born here, and I didn't grow up here. For me, a lot of British films of the 1960s were helpful. They were great for getting an idea of the film's tone and what the sinister side of nighttime Soho needed to be. Peeping Tom, for instance. And Frenzy, which was an Alfred Hitchcock film that I had not seen. It is a lot darker than his other work. Quite chilling.

The film shifts tone and genre throughout. How did you incorporate those shifts into your effects?

One theme that grows throughout the film is shattering glass and breaking mirrors. We start with some innocuous examples until finally there's breaking and shattering glass everywhere. That is something we gradually ramp up throughout the film. And although it's not purely a visual-effects thing, the color tones change as we visit the dreams of the 1960s. They become gradually more blurred and psychedelic as Thomasin and Anya's worlds become intertwined. 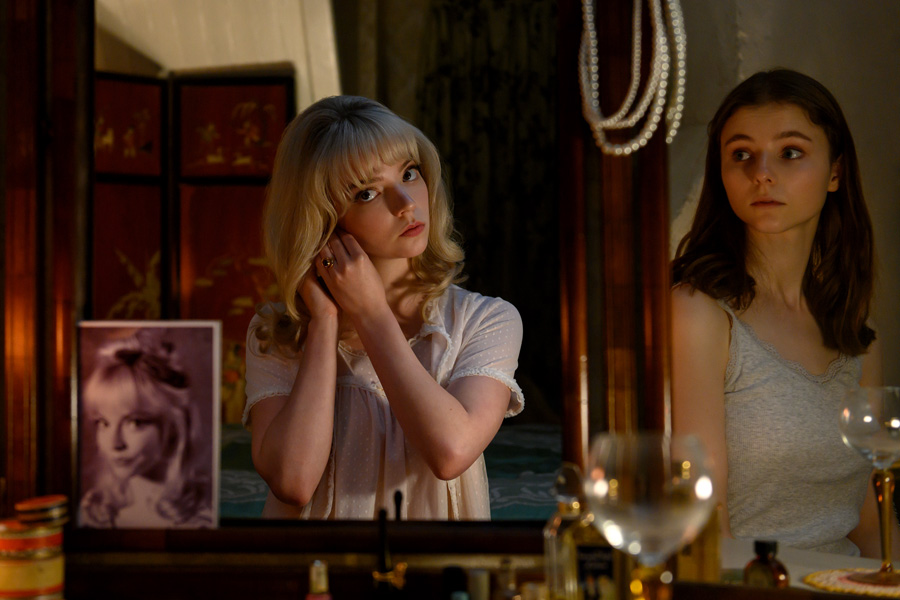 One of the most dramatic effects is the mirroring of Eloise and Sandie. How did you do that?

The first mirror gag occurs when Ellie enters the foyer of the Café De Paris and crosses towards the coat check. The attendant walks forward to meet her, and as he steps back, we see revealed in the mirror not Ellie but Sandie. They switch places again as the camera pushes into the mirror. When it pulls back, Sandie is now in the world with us, and Ellie is trapped beyond the mirror. This is the puzzle that Edgar brought to us to work out. He had thoroughly storyboarded the sequence out. We workshopped a few different techniques. We wanted to make sure we knew where the camera was going to be and how it was going to move. We thought about using motion control and doing repeated passes with and without mirrors. Eventually we decided that we could execute this camera move without the complications of using motion control. We had an amazing Steadicam operator, Chris Bain, who was able to repeat his moves perfectly time and time again. We were able to shoot a pass of Thomasin and Anya performing, one after the other. And with the help of Jennifer White choreographing their movement — and getting their timings just right — we got the shot fairly accurately. In addition, special effects created a sliding mirror with a second set constructed on the opposite side of it. When the coat check attendant walks past the mirror, the mirror slides back revealing Sandie on the doubled set. To help with the illusion, there are twin attendants, who were played by Oliver and James Phelps, the twins from the Harry Potter films. It was extremely clever and so well executed and choreographed. To finish it off, the team at DNEG did an incredible job of old fashion seamless compositing.

Are there any effects that you are particularly proud of?

The mirror scenes were the most clever jigsaw puzzle, but I also really loved the dance sequence. It was another piece of great teamwork. There are five switches in which Jack (Matt Smith) goes between dancing with Sandie and Ellie. The first effect where we wipe from a pass of Matt and Anya dancing to one of Matt and Ellie is the only purely digital one. The other switches were so well choreographed and performed — as well as perfectly shot by Chris — that we were able to composite them together. It was not a small amount of work but it was made easier by the great efforts of the teams.

Edgar Wright is such a creative filmmaker. What was it like working with him?

It was like going to film school, especially in the early days when I was watching the movies he recommended. Also, it was amazing to watch his process with the editor Paul Machliss, who was on set all the time even when we were out on location. He was there with an Avid making sure that all the shots were going to fit into place. There was such coordination. In Ellie's bedroom, for example, there is the constantly flashing neon light of the three colors of the French bistro outside. We needed to make sure that we always had the right timing for the red, white, and blue sequence, especially if we were shooting in slow-mo. I hope the audience appreciates how complicated it all was. 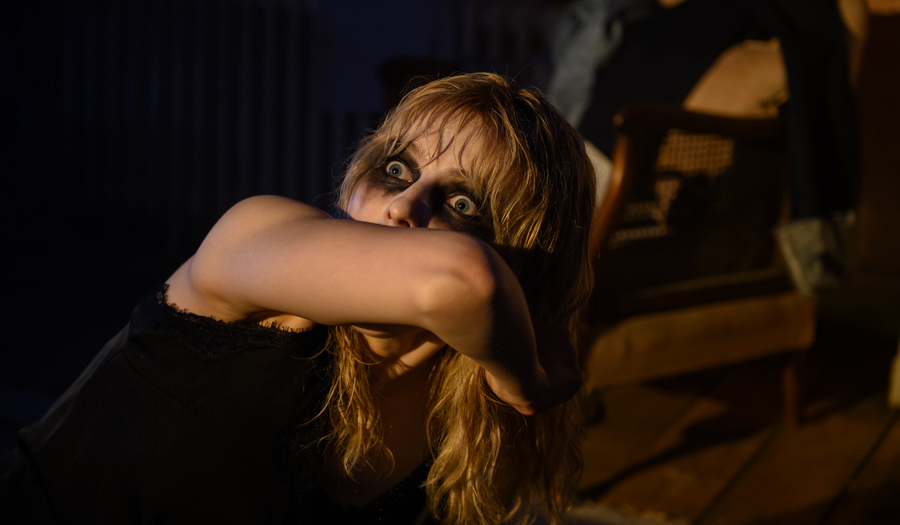 Thomasin McKenzie as Eloise in Last Night in Soho.

What was it like to make a film about where you live?

Like Edgar, I’ve worked in Soho for many years. It was nice to work on something that was based here. I loved researching the streets that I know so well and finding out what they looked like in years bygone. We recreated what the streets were like in the 1960s by adding the cars and the advertising that was correct for that era in Piccadilly Circus.

Why would you tell someone to see this film?

At the start, the glamour of the dream sequences and Thomasin’s and Anya’s performance are so compelling. Then the twist towards the darker side draws you right in. It's a non-stop roller coaster of images and sounds that takes you right through.