From The Smurfs To Mid-Century Modern: The Design Of Spoiler Alert

Michael Showalter’s Spoiler Alert uncovers the rich, complex trajectory of a longtime relationship. Based on Michael Ausiello’s memoir Spoiler Alert: The Hero Dies, the film follows Michael (Jim Parsons) and Kit Cowan (Ben Aldridge) from meeting as young men starting off in New York City to years later when they are living together but growing distant to the final chapter when a sudden tragedy pushes them to reconfirm the love they found for each other so long ago.

To bring this New York City love story to life, Showalter reached out to production designer Sara K. White. Recently nominated for an Emmy® for her lush sets featured in the TV series The Flight Attendant, White also is adept in getting the details right on local dramas as she did as the Art Director on Pariah. Creating the various living spaces of Michael and Kit, as well as the home of Kit’s parents (Sally Field and Bill Irwin), White narrates the details of a long-term relationship by the objects that surround them.

We spoke with White about the comfort of Smurfs, the style of mid-century modern furniture, and the power of Ausiello’s love story.

Get tickets to Spoiler Alert now. 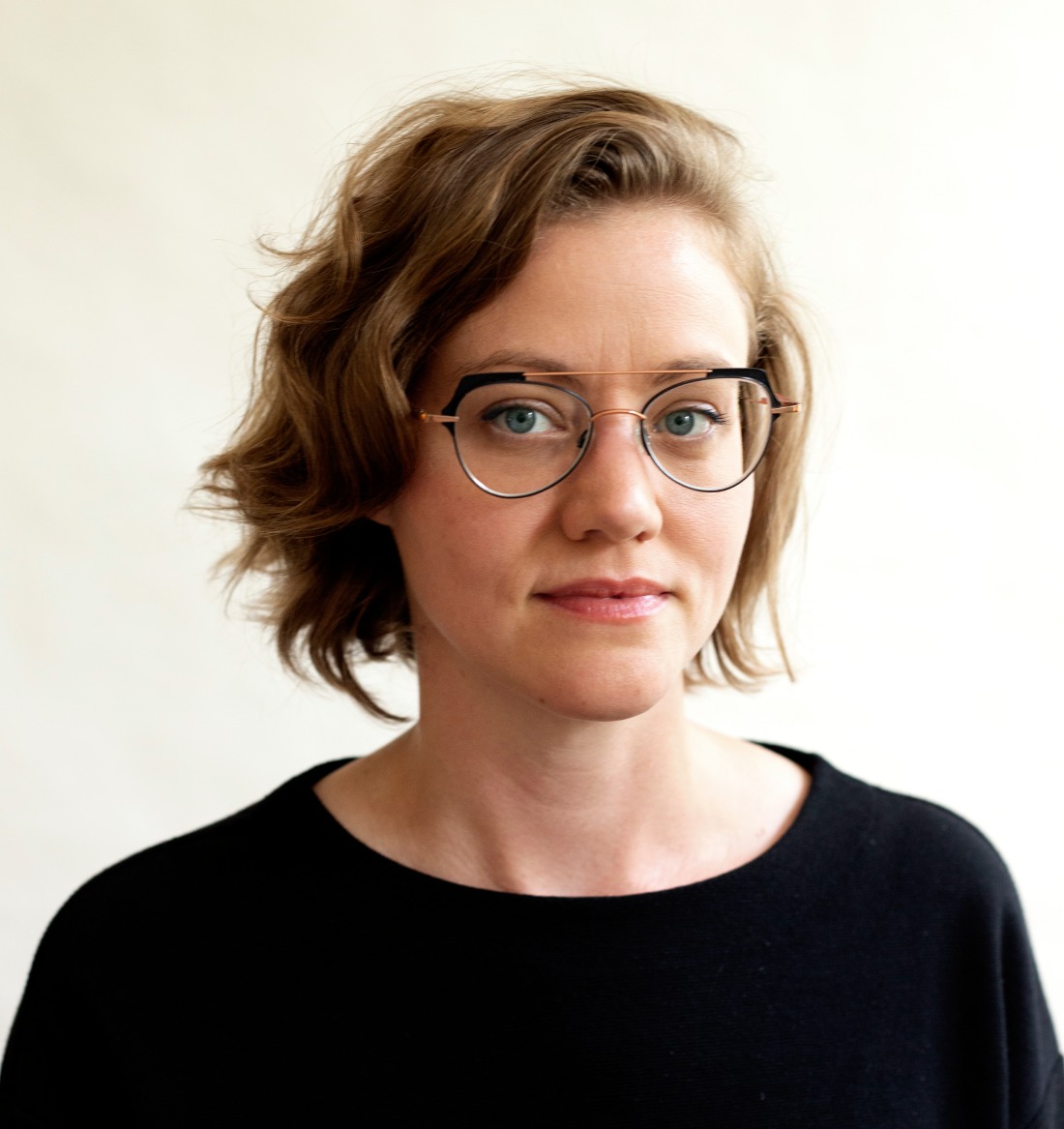 How did you get involved working on Spoiler Alert?

I was sent the script by my agent so that it was a very traditional introduction. Although I think that director of photography Brian Burgoyne, with whom I worked with on The Flight Attendant, might have had a little to do with me getting the job. When I read the script, I fell in love with the story.

What did you see as your biggest creative challenge as a production designer?

It was less a challenge and more of an opportunity. I recently lost someone who was very important to me, so I welcomed the chance to portray this experience in a really authentic way. I wanted to be able to capture the growth of a relationship through their spaces, to show that honestly to an audience and allow them to see the characters as they are.

When they meet, they live in separate spaces. What do we learn about them from their apartments?

It was really helpful for me to be able to speak to Ausiello and get some reference photos of his and Kit’s homes from that time. For Kit, his space is a sanctuary that he's created for himself amidst the chaos of the rest of the world. Even though he shares the apartment with a roommate, his own room is something that's very beautifully appointed with objects that are meaningful to him. It is filled with décor that is both whimsical and shows off his love of design.

It was great fun to find a base layer that spoke to exactly where Michael was in his career. We were able to find an apartment building that had a specific 90s’ nod with its architecture and windows. And then we built the décor with pieces that might seem haphazard but held worth for him. You can imagine that maybe he brought some stuff that was comforting from home, and then he layered on top of that. But the biggest thing was the explosion of Smurfs throughout. Michael Showalter was excited to go all the way with the Smurf. We got to go nuts.

The Smurf collection is pretty impressive. Where did you find all of them?

It was mostly Michael Ausiello's collection. We augmented with a couple pieces here and there but Michael was extremely generous in trusting us with the pieces that he's been collecting and have meant so much to him throughout the years. The thing is that we used only a small portion of his collection. You can imagine how expansive his memorabilia is.

One of the other unique spaces is the set of Michael’s imaginary sitcom of his life.

In building it, we made sure it was immediately identifiable. The hallmark for those late 70s, early 80s air sitcoms with which Michael would have grown up are a set with multiple entry points: the stairs, the front door, the back door, and a side entrance to another room. We looked a lot at Roseanne as a touchstone for those elements, as well as the coloring of the layout. 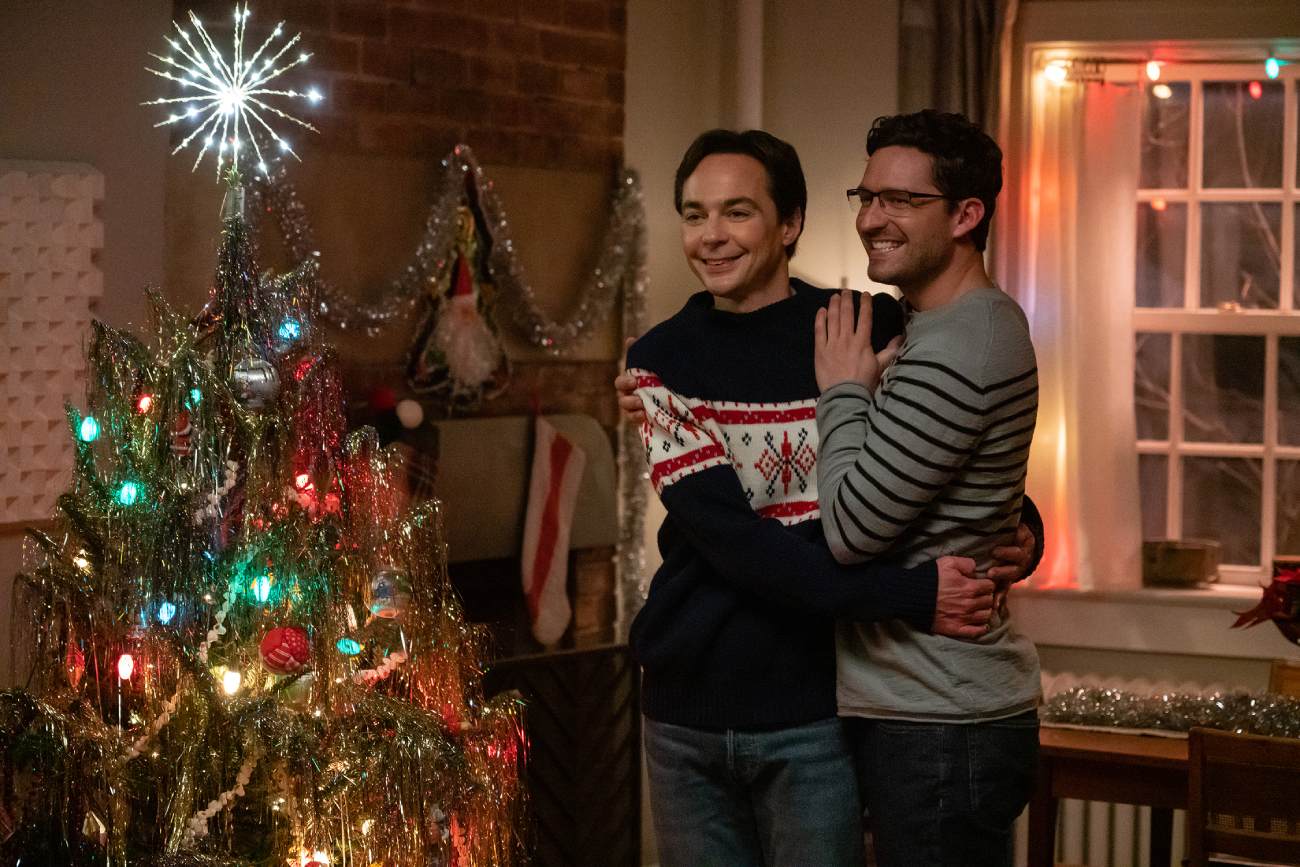 Perhaps the most important space is the apartment Michael and Kit bought together and lived in.

I wanted to make sure that it felt like it was something that they built together, that they collaborated on. We wanted it to feel like a space that was still growing, changing, and imperfect. We have this area right by the entry door that is actually unfinished. You see the stud wall where they might have torn down part of a wall to open up the space. They ended up using that as a display area. I wanted viewers to get a sense that they revamped this space to make it their own. In decorating, we used color palettes that speak to both of them. There are muted and tasteful gray tones that speak to Kit and then there are pops of color that feel like Michael. Looking at the space as a whole, you definitely understand that Kit as a designer may have had a stronger hand in the look but Michael wasn't left out of the process.

And the Smurfs still remain?

Now they are right at the entry. You are not going to walk in and not see them but they are tastefully contained.

Your spaces for the film highlight how objects and décor provide real comfort for people.

Absolutely. With Michael's character, we learn as a child [when his mother died of cancer], he lost the chance to be comforted the way children are. His comfort comes from being surrounded by objects that make him feel warm and cozy. It was important to me that a sense of comfort permeates all of the spaces. It is the same in the home of Kit's parents. Their space with exposed timbers feels warm, comforting, and natural. 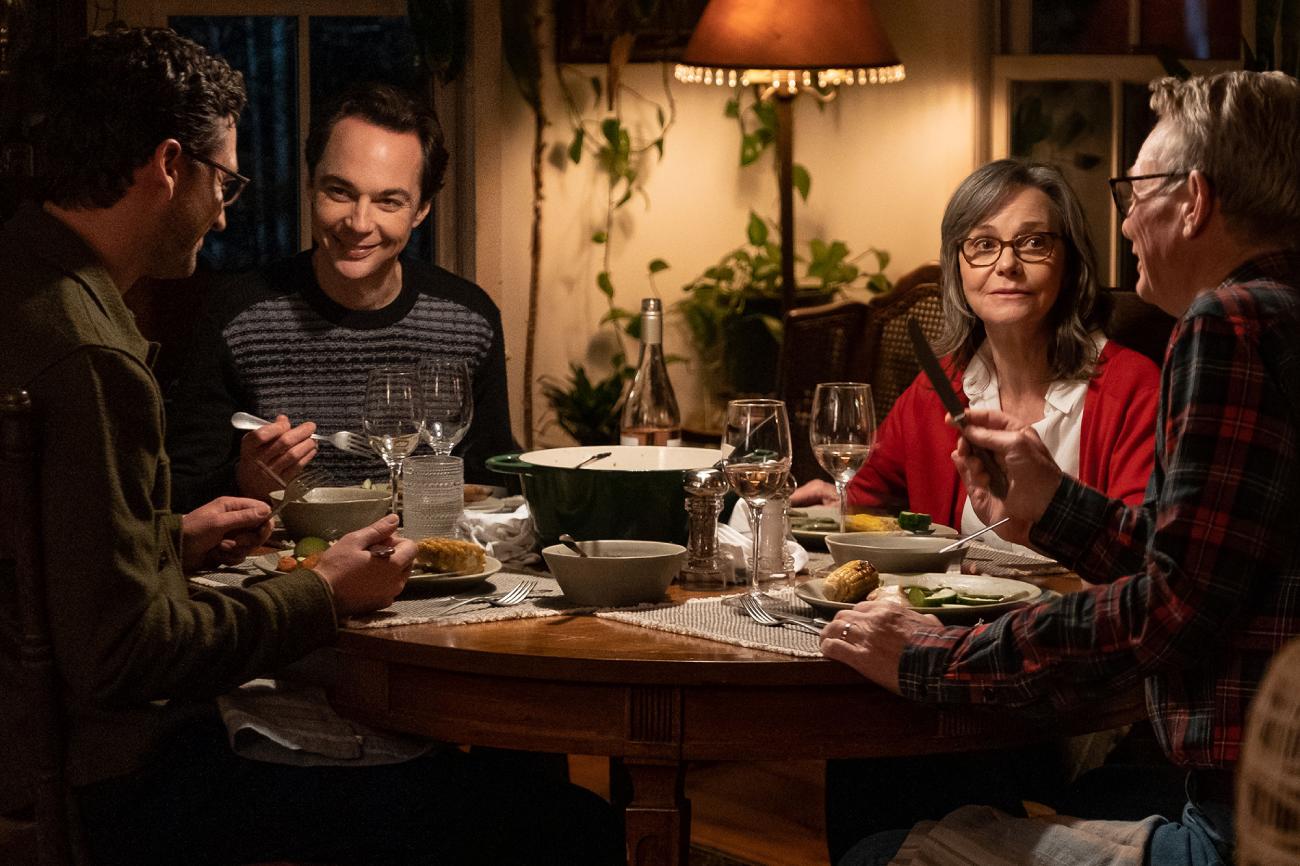 I love being able to give a little bit of real New York back. I'm from Ohio. When I moved to New York City some 20 years ago, I was surprised by how economically people lived in their spaces. To show New York apartments authentically, you need to show how closely people, whether they are partners or roommates, live together. It’s not like they're on a different floor or have a different entrance. You're constantly interacting with each other. I love the challenge of showing that, although it can be difficult due to the spatial requirements of moving a camera about.

How did the décor in Michael and Kit’s apartment describe their life together?

I feel like you're always talking to the subconscious when you're designing. You are subtly telling the audience this is something they should pay attention to. For me, it was informative to learn that Kit worked at Wyeth, which is an impressive purveyor of mid-century modern design. The pieces that he chose for the apartment or brought from his previous home say a lot about him. Kit's desk in their shared apartment, for example, is the same desk which was in his previous home. All together these pieces start to create a storyline about their lives.

What do you hope audiences take away from Spoiler Alert?

The film gives such a full picture of life in a relationship. It doesn’t sugarcoat the hardship. If you're in a long-term relationship, there are going to be rough patches that feel impossible to get through. But there is also the excitement and joy of feeling like you’ve finally met your person. It’s such a human story.