In Paul Schrader’s searing drama, The Card Counter, Oscar Isaac plays William Tell, an ex-con who learns how to take control of his life by manipulating games of chance in casinos around the country. In his attempt to redeem his own life, he tries, with the help of a manager (Tiffany Haddish), to rearrange the fate of an angry young man bent on revenge (Tye Sheridan). Despite Tell’s attempt to separate the claustrophobic worlds of airless casinos with the frenzied internal nightmare he is trying to escape, his many worlds begin to collide.

To give shape and form to these different worlds, Schrader turned to production designer Ashley Fenton. In intimate, smart films like In a World…, Mistress America, and Beatriz at Dinner, Fenton has demonstrated a talent for imbuing ordinary spaces with rich, nuanced psychological meanings. With The Card Counter, she devises ways for the windowless, blinking spaces of dimly-lit casinos to reflect Tell’s propulsive, hypnotic journey.

We spoke with Fenton about collaborating with the renowned writer/director Paul Schrader, working within the confines of casino rules, and capturing the multiple worlds of Oscar Isaac’s character.

Get tickets to The Card Counter now! 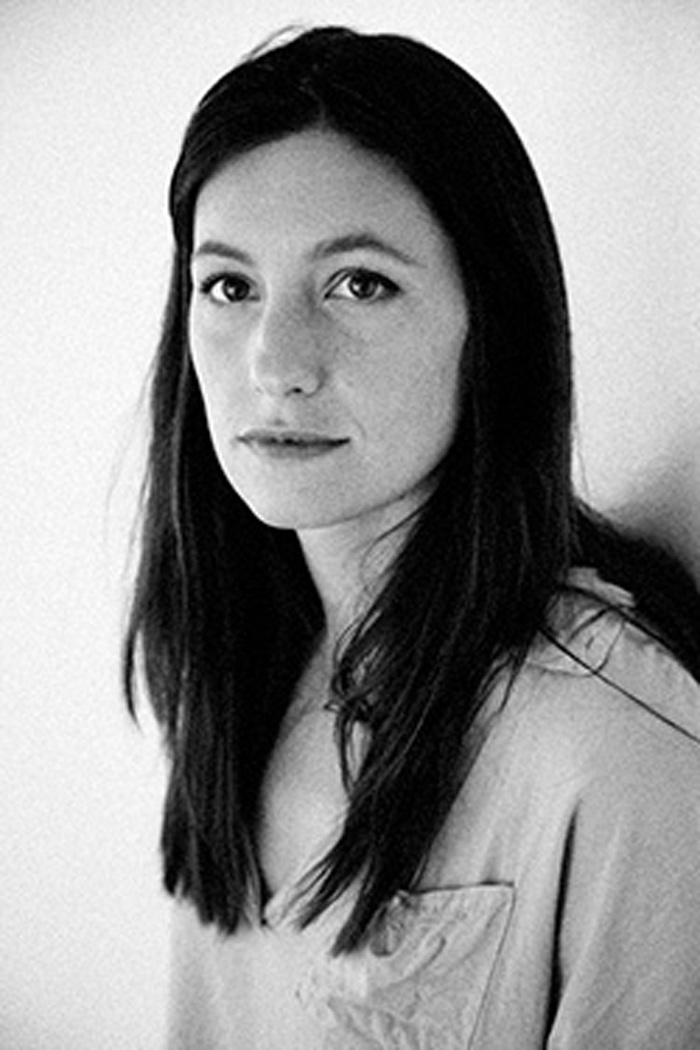 How did you become involved with The Card Counter?

I became part of the project in a natural way. I had known one of the producers from way back, who asked me if I wanted to interview for this new project. As they told me more about it and who was making it, I responded, “Yes please. Interview me for this. I would love to.”

When you read the script, what did you like about the story?

I get a lot of scripts. Not all of them are fully formed so I have to imagine what the film will be like. Is it is going to be good? Is it is going to be something I'm interested in? I loved this script right away. The script was so strong that I really wanted to be a part of this film. I felt that I could bring something to it.

What did you see as your chief creative challenge?

After reading it, I could see that there were these three different worlds. While the story was about a very real place, there were all these dream sequences and the life led within casinos. You could see the story was going to be shot in an interesting way. For me, there was a lot of room to make creative decisions.

Did Paul Schrader have a sense of what he wanted the production design to be?

Paul is very pragmatic about the process of filmmaking. He knows what he wants it to look like, but he also understands the challenges that come with making a project like this. He was very clear about the things we should focus on. It was about distinguishing these three different worlds: the casino world, Tell’s dream world, and the real world that is going on around him. 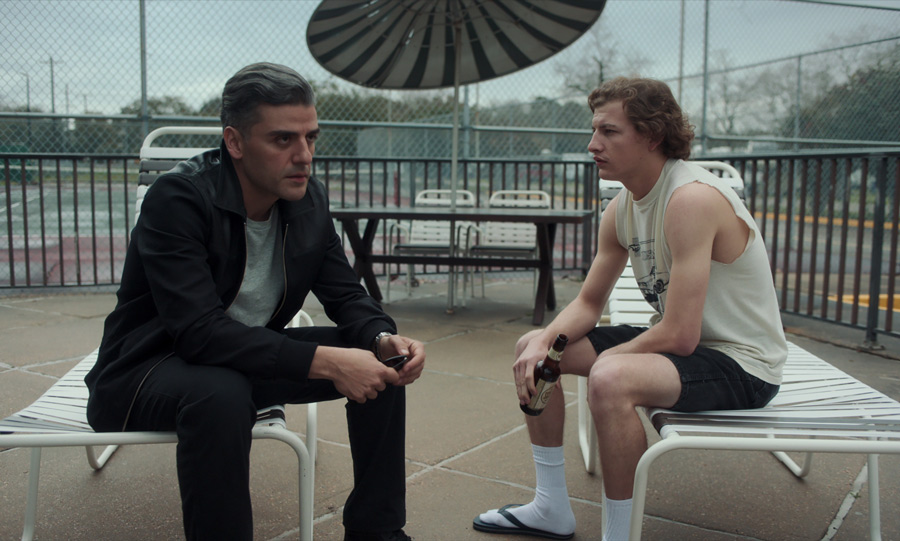 Oscar Isaac and Tye Sheridan in The Card Counter.

Schrader is such a cineaste. Did he give you many film references?

He has so many references, but many of them are things he has been working with for a long time, such as the films of Robert Bresson. He doesn't reference Bresson directly. Instead, he has these off-handed comments. For example, he might say, "the hands." If you've seen Paul's other movies or read his essays, you sort of get it.

Did you do much research on the design of casinos for the film?

We shot in an actual casino, which had a lot of rules about what you could and couldn’t shoot. They are so precisely designed. You can't change a lot of the colors. We focused on how to mold the environment with what we could do. For example, what colors didn’t we want to see. We did a little bit of research to start, but relied on firsthand research while we were at the casino by just observing people. Being in these places and watching these people — like how a winner reacts or the couple who stays up all night playing looks — was really helpful in figuring out these spaces.

Did you try to mimic casino design?

We did a bit. Shooting in casinos is really hard because there’s an enormous amount of red tape and oversight. There is surveillance and eye-in-the-sky cameras watching you all the time. You have to be careful about what you cover and what you don't. In designing the film, we backed into the space rather than coming at it with specific designs. In the casino, we considered what we actually had to work with and that informed how we designed the rest of the spaces.

Variety wrote, “A great poker sequence makes you feel like you’re seated at the table... and The Card Counter gives you that sensation.” How did the production design do that?

We focused on getting the details of the game right. We had our poker chips made for the kind of games being played today. We used as many real things as we could. Even the weight of the chips was considered. We personalized cards and we made sure the cards were the right weight. There was a lot of sitting on the floor watching people in the casino to get the details just right. For the drifting gambling feeling, the rest of the casino was a stripped-down version, which gives the viewer a sensation of being fixated on gambling. 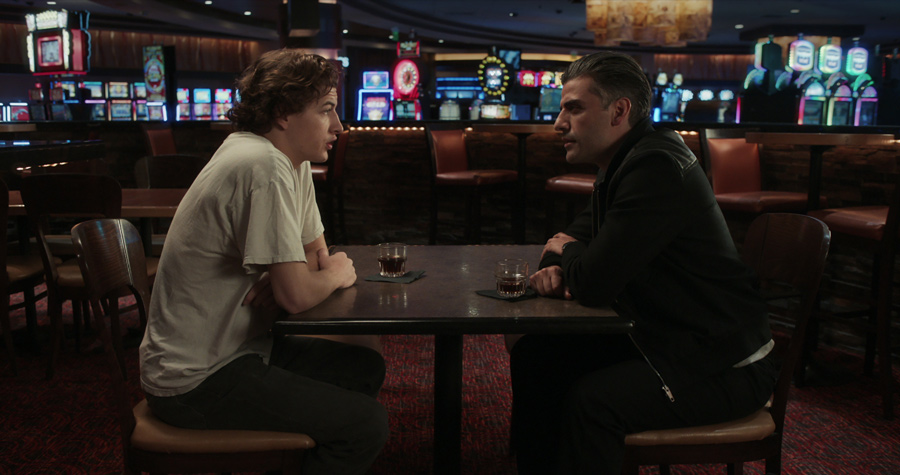 The casino world of The Card Counter.

Isaac’s character seems to want to control everything, including the design of his hotel room.

He has a lot going on internally in his life. When there's too much going on inside, we tend to try to control the things which are happening outside of us externally. How can he control the environment around him in a way that makes him comfortable again.

Shooting windowless spaces can be difficult. How did you work with cinematographer Alexander Dynan to define the look of the casinos?

We talked early on about how we wanted to approach a lot of these rooms, about creating the right palate, and how the texture of the fabrics would give off the right amount of glow. We got as picky as we could with the casino machines. It was a lot of talking with the casino ahead of time to make sure that we could black out certain areas. There was a lot of playing with dark spaces and really allowing the games that had a lot of life shine in those moments. That really helped to focus the palate without getting too heavy-handed.

What was the approach with the dream sequences?

We tried to make our space as realistic as possible and then let the camera do a lot of two experimental things to create the sensation of being in a dream. Instead of going for wacky designs, we grounded the space in a sort of reality and let the camera reflect the subjectivity of the characters.

How was it working with Paul Schrader?

A lot of people don't really realize how funny he is. He would let me know when things weren't working and when they were working, but it was usually contained in or accompanied by some sort of wisecrack. Being able to laugh with someone is something you can't take for granted. There are a lot of things that can happen while making a film that can be very stressful, and he just made me feel like we were in a safe and creative space.