In Justin Chon’s Blue Bayou, New Orleans-based Antonio LeBlanc (Chon) seems about to realize the American dream, when everything goes very wrong. Despite a troubled youth, he is now happily married to Cathy (Alicia Vikander), a father to her daughter from a previous marriage, and eagerly awaiting the birth of a new child. As a Korean immigrant adopted at a very young age, Antonio soon learns how precarious his citizenship status is. As a film about home and homeland, creating spaces that reflect Antonio’s life and personal journey becomes essential. Chon turned to Bo Koung Shin, a Korean production designer who had worked with Chon previously on Ms. Purple. As a designer, Shin brings her years working on Korean productions to an American locale.

We spoke with Shin about her working with Justin Chon, researching the world of New Orleans, and creating a unique color palette for the film and characters.

Get tickets to Blue Bayou now! 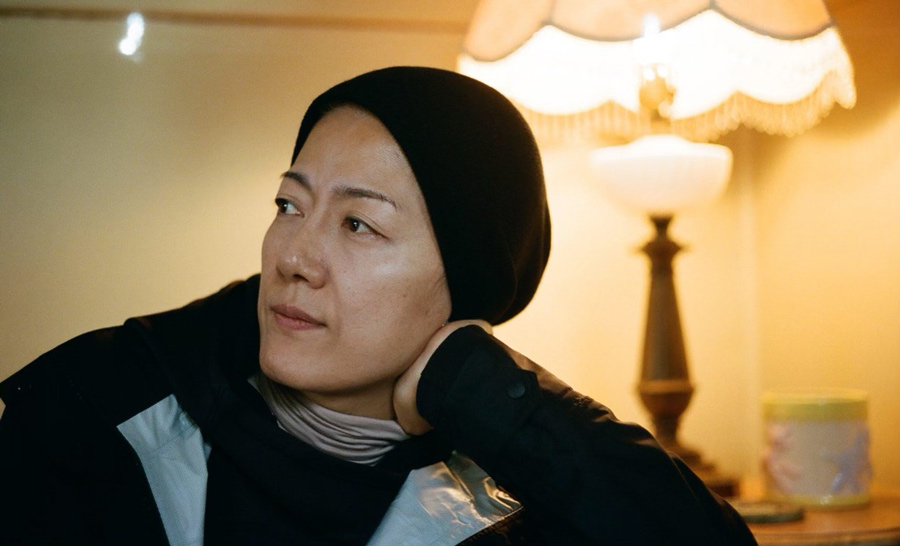 How did you become part of this project?

Before Blue Bayou, I worked on Ms. Purple with Justin. I met Justin while I was a visiting scholar at Chapman University- I had a friend who is a producer in LA who told me about an emerging yet outstanding, Korean American independent film director, Justin Chon. I believed in his vision and passion, so I joined the project.

When you read the screenplay for Blue Bayou, what moved you about the story?

I am Korean and a parent. Reading the screenplay of Blue Bayou, I felt the sadness of the Korean children given up for foreign adoption, as well as empathizing with the parents who were in that situation. Even though it wasn’t my child, I could still feel the shame of not being able to care for a Korean child. Watching Antonio trying to navigate his new life in America, which was filled with sorrow, loneliness, and feelings of alienation, I related to those same feelings that just cannot be completely described with words. Yet, Justin was able to poetically capture those raw emotions very well. When I read the screenplay, I was able to imagine a sad and beautiful film.

As a production designer, what did you see as your biggest creative challenges?

Although Antonio was born in Korea, I didn’t think of him as Korean but American. I wanted to express and emphasize his American identity. I am not American so bringing the little American details in Antonio’s life to screen was difficult and what I had to focus most on. With the film being set in New Orleans — a place with deep culture — I was simultaneously learning about Southern culture and bringing Antonio’s unique character and the film’s look to life.

How did having worked with Chon before help with the production design?

When we first talked about Ms. Purple, I could tell he was a little wary about putting his complete trust in me as a production designer. I showed him my vision for the film, and he seemed skeptical about whether or not I could actually realize conceptual ideas into physical sets. After seeing the first dressed set, he warmed up to me and my ideas. After filming the entire film, we gained a mutual understanding and respect for one another’s artistic sense. We also realized that we have the same aesthetic.  For Blue Bayou, I completely believed in Justin as a storyteller. In turn, he placed his trust in me as the production designer, allowing me to take full control of the design aspect to bring his story and vision to life. For Blue Bayou, Justin really wanted to focus on the characters' identities and emotions. I decided to use color as a medium to help further strengthen character relationships and identities in the story. These colors were reiterated throughout the entirety of the movie, in the character’s house, mode of transportation, clothing, and much more. 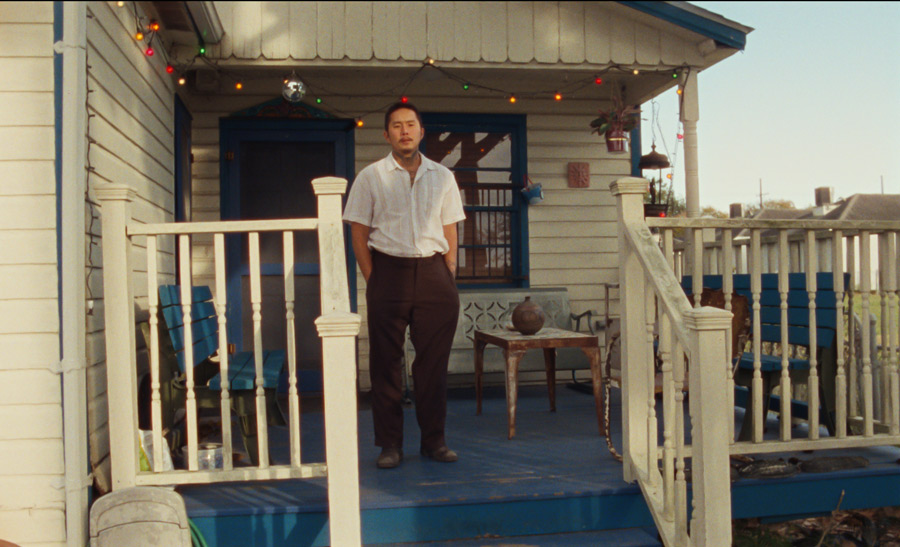 Antonio (Justin Chon) at his home in Blue Bayou.

What sort of research did you do on the film’s location?

I was living in Korea when I first received the script to Blue Bayou. I started my research immediately after reading the script. I educated myself on the history of New Orleans. I also used Google Maps to digitally explore the streets of New Orleans. I used Airbnb as a tool to study the architecture of houses and the lifestyles of the people in New Orleans. Through my research of New Orleans, I was charmed by the cultural melting pot and felt the natural environment was very attractive. The second research I did was about American life. I researched many paintings and photographs that depicted American life and I chose specific ones that resonated and inspired me. I took these inspirations that I had and researched New Orleans once more to find specific houses, stores, streets, parks, and actual places in the city that reflected these concepts.

What about New Orleans and the area did you want to capture in the production design?

When I landed in New Orleans, I felt that the city was much more unique, artistic, and historic than what I had imagined. When we started location scouting (specifically when we were scouting the bayou location), I found the sights of nature in New Orleans very impressive and mysterious. One of the most important elements of the production design was water. Water is a specific element in the film that represents the self who is awaiting birth. Because of the importance of the meaning of water in this film, finding the perfect bayou location was important. The other important element of production design was reflection. This movie can be considered a self-portrait of Antonio’s sadness. When painting self-portraits, we have to utilize a mirror to paint our own image. To know oneself, we have to look at a reflection of our shape. To suggest how Antonio is trying to find himself throughout the movie, I designed the sets and location with lots of mirrors, glass, rain, and water

How did you find the locations in the film?

Justin, Ante [Cheng, cinematographer], and I decided the location of the sets together. In regard to Antonio and Kathy’s house, I was very interested in the shotgun houses, a structure specific to the New Orleans residential architecture. When searching for the shotgun house, we looked specifically at lower-class neighborhoods to support the narrative of Antonio and Kathy’s background. We ended up finding a shotgun house next to the railroad that was owned by a musician and a puppeteer couple. The interior and exterior of their house was already artistic, and we felt that there were certain parts of the house that matched the color concept of the protagonist. 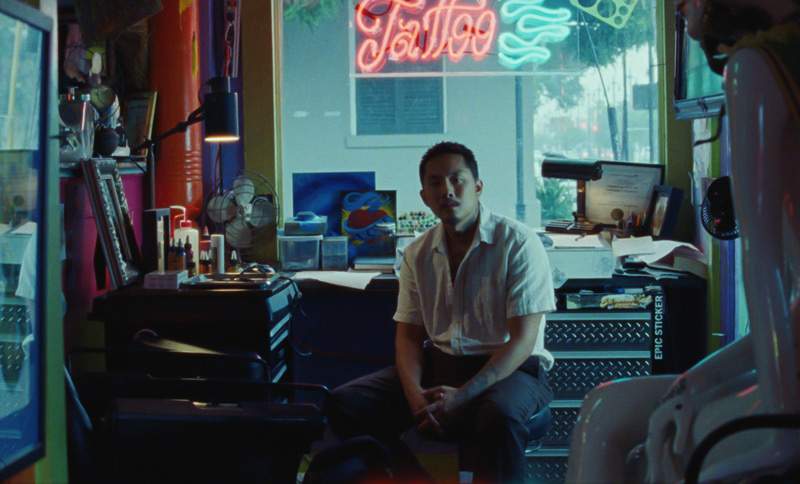 Antonio (Justin Chon) in his tattoo parlor in Blue Bayou.

How about the tattoo parlor?

The tattoo parlor was a special connection to Justin. He was introduced to the tattoo parlor by a friend, and it is owned by the first African American female tattoo artist. We felt it was perfect when we first visited the tattoo parlor. The interior color fit with our color concept for Antonio and the space itself had these large windows that filled the space with natural lighting.

How do you use color in the production design?

As a production designer, I believe that color has a great influence on the psychology of the audience while watching the film. I prefer to start with the color concept first. When I organize the character's psychological state, environment, occupation, standard of life, taste, etc., some colors are naturally associated with the colors of other characters. This eventually brings out the main tone of the film. But of course, this does not happen every time.

Was there a color for Antonio?

Antonio's color was inspired from the yellow in Francis Bacon's paintings. Yellow represents the brightness of the sun as well as corruption. In Bacon's self-portrait of his torn ego, I felt that it was the best suitable color to express Antonio's mind. I could relate this to Antonio’s background of being abandoned and then being abandoned again by his new mother and motherland. In color psychology, yellow is interpreted as “innocence,” “sunshine,” “juvenile,” and “childish.” This interpretation of yellow suggests that Antonio's childhood pain is still in the present. Yellow is also the mocking expression of Asian skin colors. Yellow is also a fragile color that quickly becomes dirty and easily deteriorates when it meets other colors. This was nicely expressed with Antonio's motorcycle. As the film progresses, Antonio's main color yellow changes to orange, representing "anxiety," "unstable," and "artistic." This change was made as Antonio faces the violent deportation due to the flaws in the adoption process in the past. Yellow can be changed into mustard, camel, and ember, which can express “faded,” “old,” and “poor.” However, at the same time yellow, orange, mustard, camel, and ember are all colors that can express a warm heart. 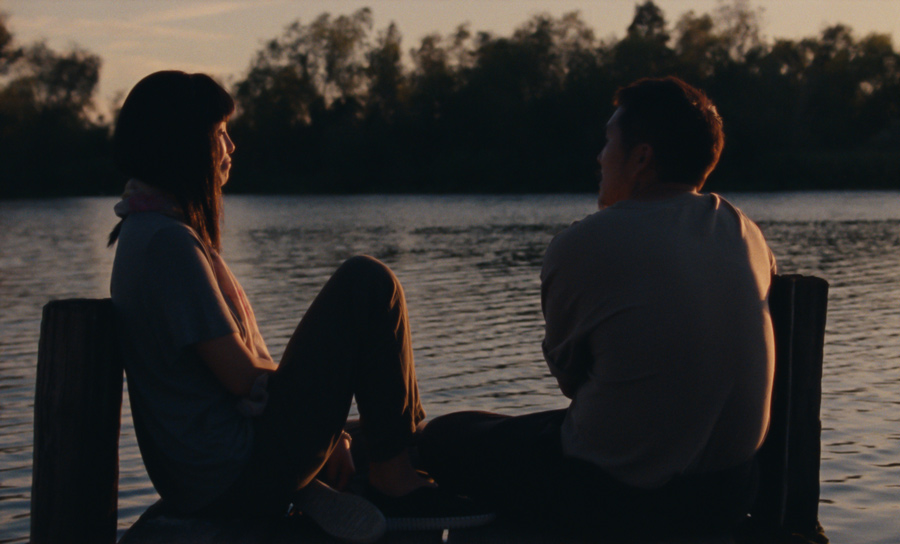 What was the color for Kathy?

After choosing Antonio's main color, I came up with colors for Kathy, Jessy, Ace, and Parker. Kathy was expressed with colors like purple, cobalt blue, sky blue, and white, representing a poor but hard worker. Her color palettes are the opposite of Antonio's yellow and orange, but at the same time, are the best match. For Kathy specifically, the bedroom wall, the curtain, and the bedsheets were focal points of her color purple and sky blue. The bedroom and bathroom were set up as Kathy's space as the house location had a blue bathroom and bedroom. I still added a bit of Antonio’s tone by setting the bedding with prints and the old stained glass table lamp.

What would you like audiences to take away from seeing Blue Bayou?

I would like the audience to realize and become aware that these situations are a reality. To acknowledge the social and political issues in the film and hopefully take action to make a better world.