In Stillwater, The Production Design Lets Matt Damon Be A Stranger In Marseille

For Stillwater, the city of Marseille provided ongoing inspiration for filmmaker Tom McCarthy. To tell the story of Bill Baker (Matt Damon), a roughneck from Oklahoma who travels to Marseille, the audience needs to experience the ancient French city the way he does. People must feel the despair in the jail that holds his daughter, Allison (Abigail Breslin), imprisoned for a murder she insists she did not commit. The cozy apartment of Virginie (Camille Cottin) and her daughter Maya (Lilou Siauvaud) must feel real and lived in. “Having been to Marseille and feeling how unique and special it was to me,” notes McCarthy, “I hoped that would translate both to my collaborators and ultimately onto the screen.” To bring out the city’s complex and nuanced layers, McCarthy turned to production designer Philip Messina. Indeed McCarthy credits “my production designer, Phil Messina with providing our Marseille canvas in such an intimate and authentic way."

Having worked on everything from big-budget fantasies like The Hunger Games to gritty independent dramas like Traffic and Erin Brockovich, Messina knew how to adjust his approach to capture the story and the director’s vision. For Stillwater, he let Marseille show him how it should be presented. We spoke with Messina about exploring Marseilles, scouting the perfect locations, and capturing the film's spirit. 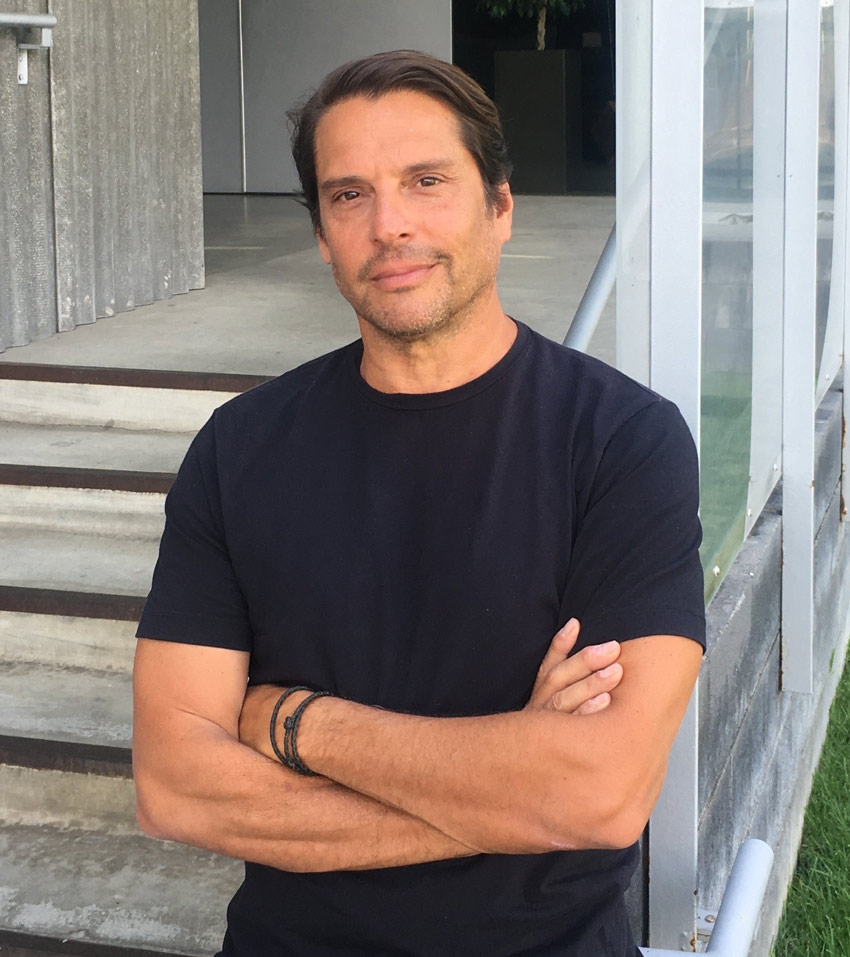 You’ve worked on a wide range of films. How do you approach each project and how did you start with Stillwater?

It all starts with a script. On The Hunger Games, we had source material. For Stillwater, I really needed to find out what Marseille was all about. Tom had been talking about it when we met in LA a couple of times. He talked about it being an amalgam of cultures, ethnicities, crime, and beauty. I was really intrigued by what the voice of Marseilles was going to be in the film. Thinking about Marseilles, connected me to another film that I worked on, 8 Mile. Curtis [Hanson] and I really wanted the Detroit locations to have a voice in the film that was unique. While I was scouting Marseille, I kept having flashbacks to twenty years prior scouting 8 Mile. We, of course, used places that were scripted, but Tom was very open to using locales that I discovered. I would show him a place and say, “look, I don’t know what to do with this place, but it feels like our movie.” Tom would then change one of the scenes to be staged in this place. It was a very organic process. We didn’t build any sets. We used all locations.

For me, each film is different. When I did The Hunger Games, there were a lot of challenges. First and foremost, what does a cornucopia filled with weapons look like? Stillwater had different challenges. Tom had been to Marseille, and he had it very much in his sights when he wrote Stillwater with Thomas [Bidegain] and Noé [Debré]. They immersed themselves in Marseille for months. Tom knew what the city had to offer and what he wanted to tell. For me, the challenge was understanding the city. 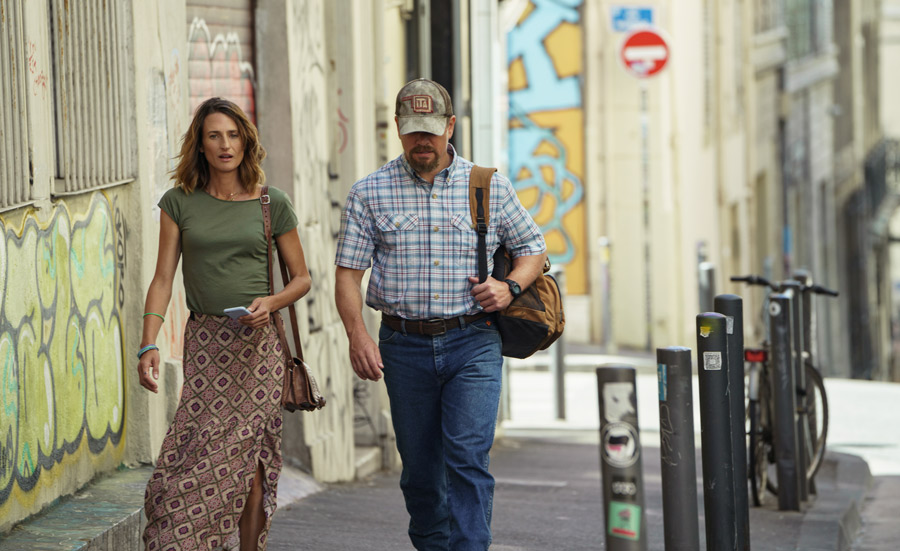 Virginie (Camille Cottin) and BIll Baker (Matt Damon) on the streets of Marseille in Stillwater.

Can you talk about some of the locations? How did you find and create Virginie’s apartment?

We had a lot of days scheduled for shooting in Virginie’s apartment. My first read was that we should build it on a set. Then we found this apartment by accident when we were scouting an exterior. It was an old convent that had been converted into apartments. And when I say “converted,” I mean that very lightly. It was a unique space. An older couple lived there, but they were happy for us to come in and do what we needed to do. Tom loved it. When he walked in, he said, “All we have to do is add 50% of Virginie to this apartment and we got it.” Cut to two months later. I’d gutted the apartment and completely changed it but kept the spirit of the place. The owner had just modernized the windows, but we got permission to put the older windows back in. We did a lot to create the feeling that we just walked into the apartment and didn't change a thing.

How did you find the housing project?

Interestingly we found it on the way to visit another set of projects. I saw these towers as we were driving by, and one of them looked empty. The locations person warned me that the housing project was rather dangerous. We went there anyway. As we drove in, we saw a kid on a recliner clocking us for the local drug dealers. What was so interesting about the places is that while there was a sketchy part to the project, there were also mothers and fathers walking their kids to school in the middle of it. It was so much more multilayered than I would have thought. I brought Tom there. Much of what was written then got adapted to what we found in that housing project. 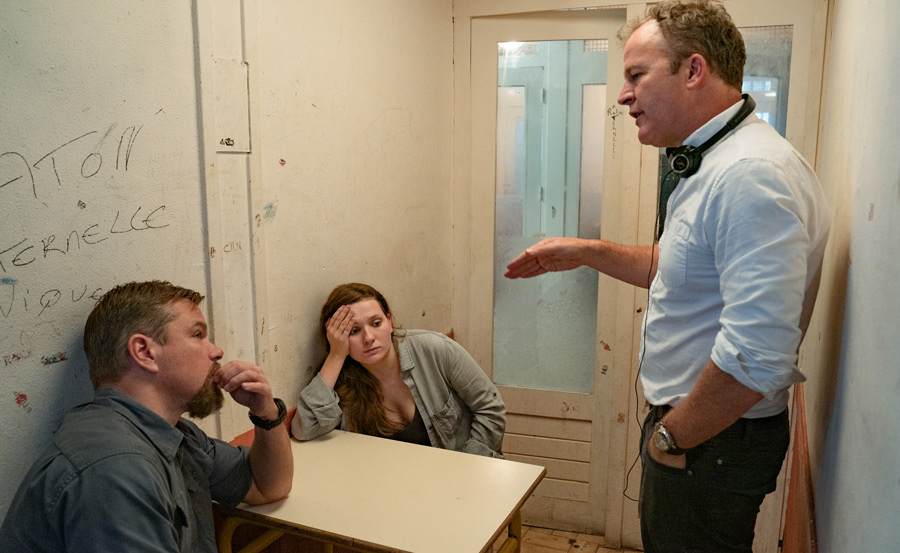 How about the prison in which Allison is incarcerated?

The prison was Les Baumettes, which Tom had visited years ago when he started researching the film. When we visited the prison during our initial scout, Tom said, “This is not what I remember.” The place was new and institutional, like an elementary school. What we learned was that they had just done a renovation and that the old prison was buried within the new prison. We went to see the old prison, which told our story a little bit better. It was not a nice place. It had been shut down a year ago, which made it easier to work in because it was empty. Visually it was so much more interesting than the new institutional prison. It had more of a patina on it, more sorrow and despair in the walls than the new one. You could see little things scratched in the walls in the visitors’ rooms.

Marseille is now considered one of the most multicultural cities in Europe. How did you capture that?

During production, a lot of the crew lived in Endoume, which is one of the poshest neighborhoods in Marseille. I chose to live in the epicenter. My neighbors were Algerians, all sorts of Middle Eastern people. The area had the best kebab shops in town. There were cafes where TVs were set up outside so everyone could watch the soccer game. I wanted to be in the thick of that because I felt that I needed  a crash course in the melting pot that is Marseille. It would have been impossible to understand the city in such a short time, but being there allowed me to scratch the surface, at least enough in order to make a movie. There were places in Marseille where we were told not to go. Places that are still considered dangerous. But we loved discovering all the parts of the city. Tom and I would often walk the streets — both day and night — just to get lost and see what we could find.

What do you want audiences to take away?

I hope that whatever bias people might have toward the main character, whatever box they want to put him in, they pause. And if they think they know the characters he meets in Marseille, they let the story unfold. Maybe we can all see a little of ourselves in these characters.