In Jim Jarmusch's The Dead Don’t Die, things get ugly really quickly when zombies take over the small town of Centerville. Although the burg's tiny police force of Bill Murray, Adam Driver, and Chloë Sevigny do their best to stem the rising tide of the undead, the zombies keep coming. To keep a steady flow of the reanimated corpses during production, Jarmusch turned to makeup artist Judy Chin, who’d worked with him before on such films as Broken Flowers and Coffee and Cigarettes. Having shown off her skill in creating glamor with her Emmy®-nominated work on Sex and the City, Chin was now ready to create some gore with The Dead Don't Die. Working with the effects firm Prosthetic Renaissance to create a range of zombie looks, Chin presented “a visually interesting new vision for zombies,” exclaimed IGN, adding that it “is a hard thing to achieve after over 50 years of undead movies.”

We spoke to Chin about highlighting Jarmusch’s sense of humor, capturing zombie style, and making the undead come alive.

How did Jarmusch originally define his approach with The Dead Don’t Die?

He told me that he really wanted to use the old school zombie movies, like George Romero’s Night of the Living Dead, as our inspiration. In his uniquely Jim Jarmusch way of talking, he told me one thing about those movies that really stayed with me: "A lot of the zombies were not wearing a lot of makeup, but they were scary, man!" To bring this drama to life, we created a wide variety of zombies. Some were prosthetic, and some were face-painted, and some had very minimal makeup. But each was terrifying. Then Jim brought in his humor, or as he would say “ridiculousness.”

Have you ever worked on a monster film before?

No. I've always wanted to, but I've never had the opportunity to do either a zombie or horror film. But I love Jim's aesthetic and his sense of humor so much that this was the perfect way for me to do one.

When you were designing the look for the film, did you study Night of the Living Dead?

Yes, of course. It is terrifying. To tell the truth, I never made it through the whole film before. I could not get past the cemetery scene. It was too scary. But I made myself watch the entire film this time. Seeing it now, I could see how the filmmaking, along with the zombies’ look, elevated the film, making it so frightening. 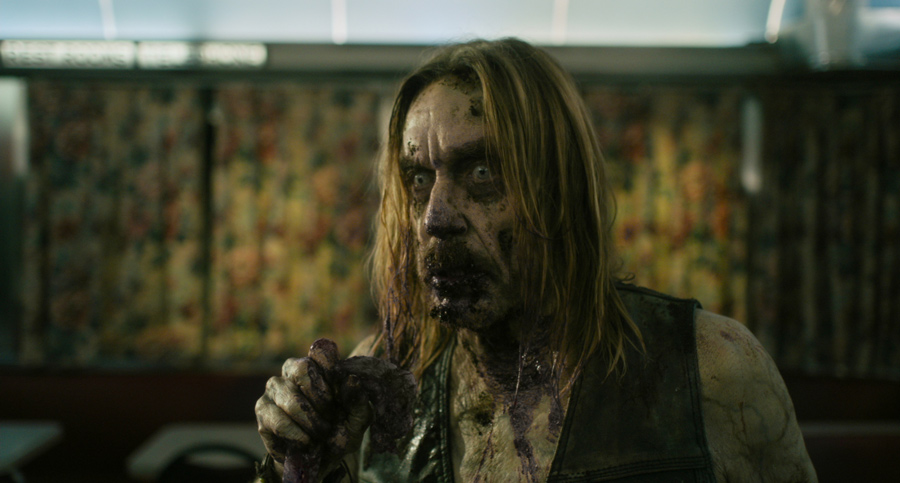 For The Dead Don’t Die, you seem to give certain zombies specific personalities, like the coffee zombies. Can you talk about that?

We wanted to give backstories for some of the zombies and that was a lot of fun. Sara Driver and Iggy Pop are the coffee zombies and their characters are from the late 60s, which you can see in the style of their clothing. My makeup for Driver was fashioned from that period. She wears this bright blue eye shadow and she has painted-on lashes, which is something I borrowed from that period. Of course, she's been dead and buried for decades but elements of her makeup are still intact—aside from the rotting, decaying parts. I also wanted her to have a bright blush, but one where I took those colors and broke them up and smeared them, making them a decayed version of makeup from that era. For the more period characters, like the Edwardian zombies, their look was defined more by their clothing and their hairstyle.

You gave Tilda Swinton a unique look as well.

For Tilda Swinton, I wanted her to look ethereal and otherworldly. I had always imagined her very fair, almost translucent. The red eye makeup felt like something that would fit an oddly beautiful character, like hers. She also wore two differently colored lenses. These design elements were simply aesthetic and created to make her unique. There wasn't any story behind them. 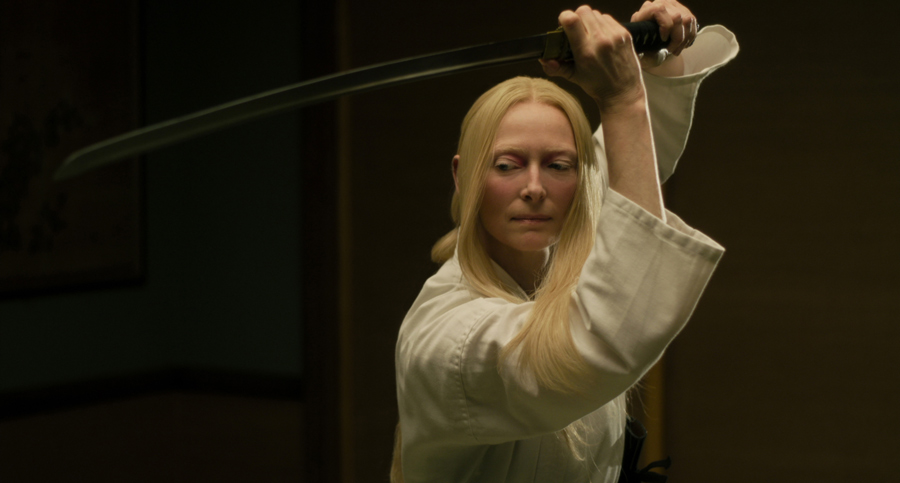 You must have connected with the scenes where Tilda starts to apply makeup grotesquely to the corpses in the morgue.

Yes, I did. That was Tilda’s character’s concept of what was normal and beautiful makeup for humans. In the film, she has this book with those strange faces from the 80s or 90s, and she thought, "I'm going to make him look like that." Then she slathers this weird palette of colors onto the corpses. I worked with her on how someone who is used to applying makeup would apply it in a situation like that.

With so many zombies, how did you decide who got made up, face painted, or had some sort of prosthetic design?

We broke all the zombies down into three zones. Zone One [included] the ones closest to the camera. Zone Two and Zone Three were background zombies. Initially the ones in Zone One were meant to be prosthetic zombies, but Jim liked the ones that were just painted as much as the prosthetic ones. So we ended up having them all mixed together, the ones with prosthetic effects and those which were just painted.

The firm Prosthetic Renaissance created many of the prosthetic effects. How did you coordinate your work with them?

We fed off each other and shared a lot of ideas regarding color, textures, and materials. I feel like we worked really well together. I've known Mike [Marino] from Prosthetic Renaissance for a very long time. We didn’t act like separate departments because the zombies needed to look like they all belong to the same film.

There is such fun energy between the cast in the film. How was the production?

It was difficult because of the large number of people we had to get through. But overall, as in all of Jim's films, it was a wonderful experience. We had a lot of fun. A lot of actors were really into what we were doing. They were very happy zombies.