For Belfast, writer/director Kenneth Branagh was inspired by having grown up in the title city during the 1960s, the start of The Troubles in Northern Ireland. The moving story focuses on Buddy (Jude Hill), a nine-year-old whose happy life of going to the cinema, hanging out with his Granny (Judi Dench) and Pop (Ciarán Hinds), and helping his Ma (Caitríona Balfe) while his Pa (Jamie Dornan) works abroad in England, is suddenly interrupted by the world outside. To recreate a 1960s Belfast resonant with filmmaker’s memories, Branagh turned to production designer Jim Clay. Having worked with Branagh on Murder on the Orient Express and Death on the Nile, Clay understood how to evoke a former time and specific mood with production design. “The period is eloquently evoked,” states The Hollywood Reporter, “by production designer Jim Clay.” With award season just beginning, Clay’s lyrical work is already getting recognized. Last week,  British Independent Film Award nominated his work on Belfast for Best Production Design.

We spoke with Clay about Branagh’s vision, working in black and white, and why the film touched him personally. 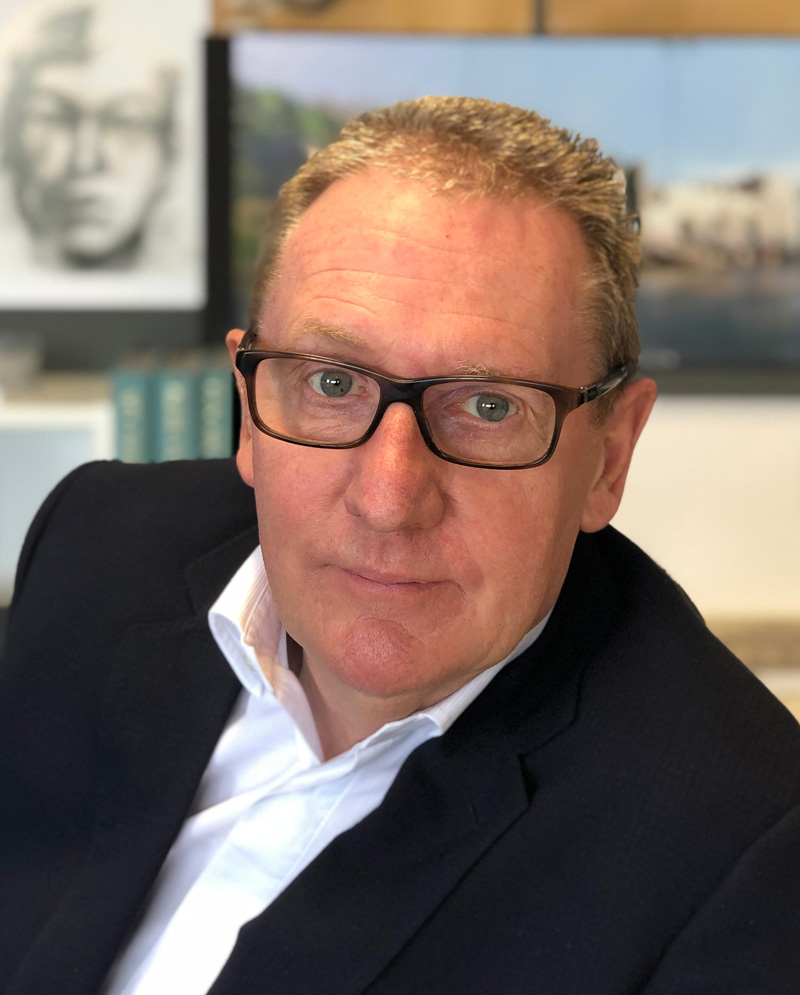 What did you think when Kenneth Branagh showed you the screenplay for Belfast?

I immediately connected with the story because I was brought up in a similar way — not in Belfast but in working-class northern England. I lived on similar streets to the one in the movie so the world was familiar.

What was exciting for you as a production designer in making this film?

As a production design, it was pretty straightforward. The challenge was just getting it made. Production began in June 2020 and the film industry and the nation were just emerging tentatively from lockdown. Most of the films that had been in production were closed and their sets were mothballed on stages. We struggled with how and where we were going to make the film with these restrictions — and there was talk of another lockdown in the autumn. Ken said, “we're going to prep for six weeks, and then we are going to shoot for six weeks. In three months, we will be done, dusted, and wrapped.” So, we just put our heads down and did it.

Did Branagh give you any specific creative direction in terms of production design?

To get a sense of the film, Ken, Haris Zambarloukos, and I, along with our first AD Martin Curry, spent a weekend in Belfast. We walked the streets in which Ken was brought up and just talked. He told us all about his childhood. That was our creative brief. Although Ken's childhood house didn't exist anymore, the streets were still there in the same formation — just with new buildings. We walked the streets he would have taken to his school and then afterwards to his grandmother's place. Ken pointed out how there used to be a fish and chips shop on that corner and around from that was a grocery store. It was like a live 3-D brief. 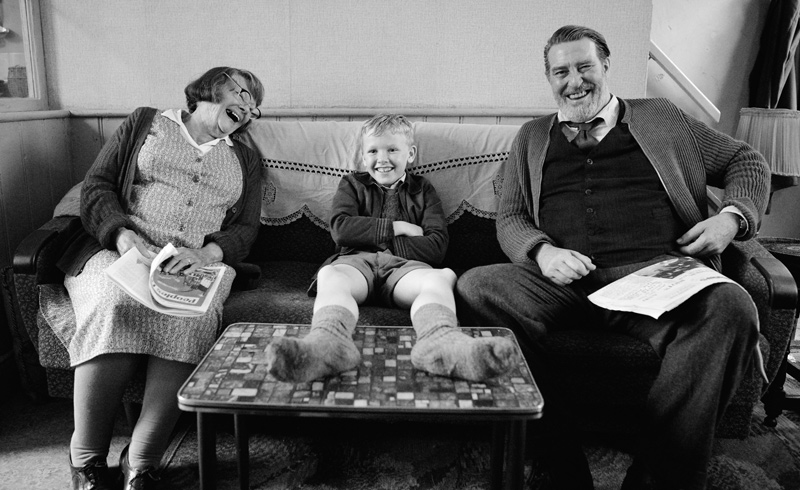 What sort of research did you do to get the furnishings right?

Since the film takes place during The Troubles, there is a lot of source material of the period. We looked through a lot of that. The overall design aimed to create a fond memory of a family living during troubled times. We were recreating a world that was imbued with the textures and memories of those who lived there and loved our main character, Buddy. In many ways, we were building Ken’s memories.

What does the interior and the shape of the house tell us about Buddy?

He lived in a warm and generous household that wasn't rich in possessions. It was rich in love. Early on, Ken pointed that money was restricted for this family. There were no items there that were just for decoration. Everything there had a function. It was a sparse physical world but a complex emotional one.

How did you shape the street he lives on?

The nature of those streets is that all the houses are the same. Our job was trying to identify the different houses which we did by using a little color, even though we were shooting in black and white. We used curtains in the windows, different doors, and, of course, the people who lived there, to distinguish the homes. Mothers and families hung out around their houses on the street more than they would ever do today.

How did shooting in black and white affect your design, especially the color palette?

I was thrilled to shoot in black and white. I’ve wanted to do it for years — so did Haris. We often tried to introduce black-and-white sequences in Ken’s other movies, but there was too much push back from Hollywood. For my work, I kept a close eye on contrast values. When I put two colors together, I made sure they were not at the same monochromatic value, that one was darker than the other. 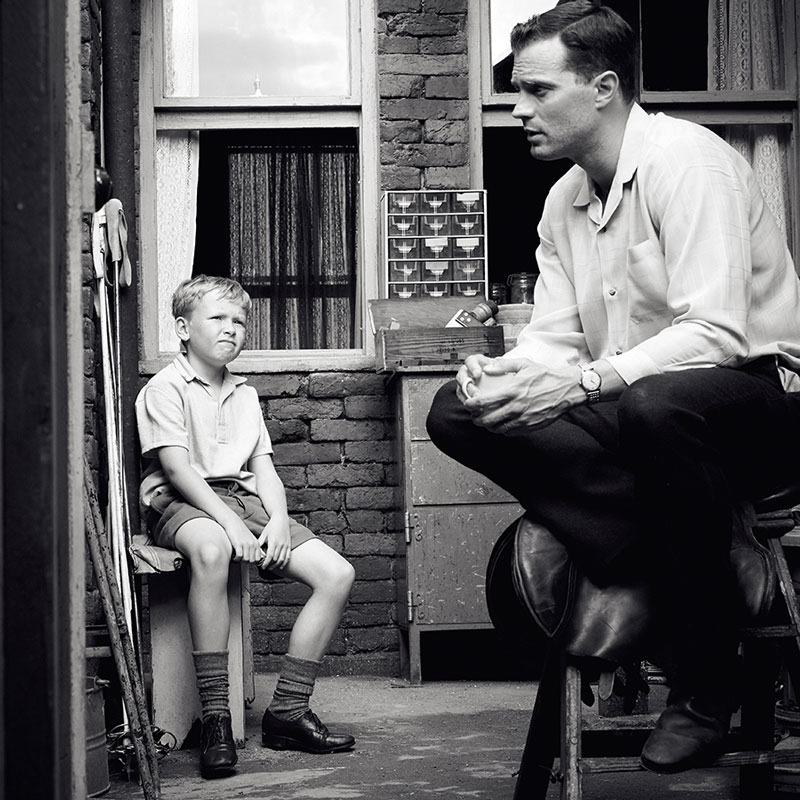 Are there aspects of the production design you are especially proud of?

I think Pop’s workshop. Buddy's grandfather was so influential in his life that we put a lot of effort into creating his workshop out in the backyard. Creating that was particularly poignant for me. When I lost my own father, his physical presence transformed into memory and that memory is preserved physically through the things he left behind. For Pop and for my dad, it was his workshop and tools that he left behind. Those people are gone, but the things they used remain. To this day, I still use my father's hammer and screwdriver and when I hold that screwdriver, I feel a connection to his life.

I feel that it is such a courageous movie Ken in that it’s one that comes from his heart. And it touches the heart of everyone who sees it. I feel that there is a time when you can settle comfortably in your life and look back. I feel that Belfast does that by letting us see the world a little more clearly. We look back in time and cherish those who nurtured us and made us the people we are. That's what I took away. Also, it feels like that this movie is very timely because of Covid. So many are suffering the loss of people they’ve lost, and Belfast feels so relevant to that.