A Q&A with director of photography Nick Cooke

In the award-winning comedy, Limbo, writer/director Ben Sharrock brings humor and humanity to the travails of four asylum seekers housed together on a desolate Scottish island. Caught between his war-torn homeland and an uncertain future, Omar (Amir El-Masry), an oud player from Syria, waits out his days with fellow refugees, trying to make sense of this strange new Scottish world. Sharrock reunited with Nick Cooke, the cinematographer who shot his first feature, Pikadero, to craft a film language that could convey the characters' sense of both community and alienation. Shooting on the island of Uist, the filmmakers used the locale's wild, rugged landscape to inspire a whimsical and unique camera style. For The Hollywood Reporter, “Sharrock and his cinematographer Nick Cooke capture the alien beauty of this stark island terrain in loving, lingering detail, with pleasing use of symmetrical framing and leisurely panoramic panning shots.” A veteran of documentary and dramatic film shoots around the world, Cooke endured the gale-force winds and harsh storms of Limbo's production to deliver a stunningly beautiful film.

We spoke with Cooke about developing Limbo’s cinematic style, shooting on the remote island of Uist, and bringing the story’s humor and beauty into focus.

Get tickets to Limbo now. 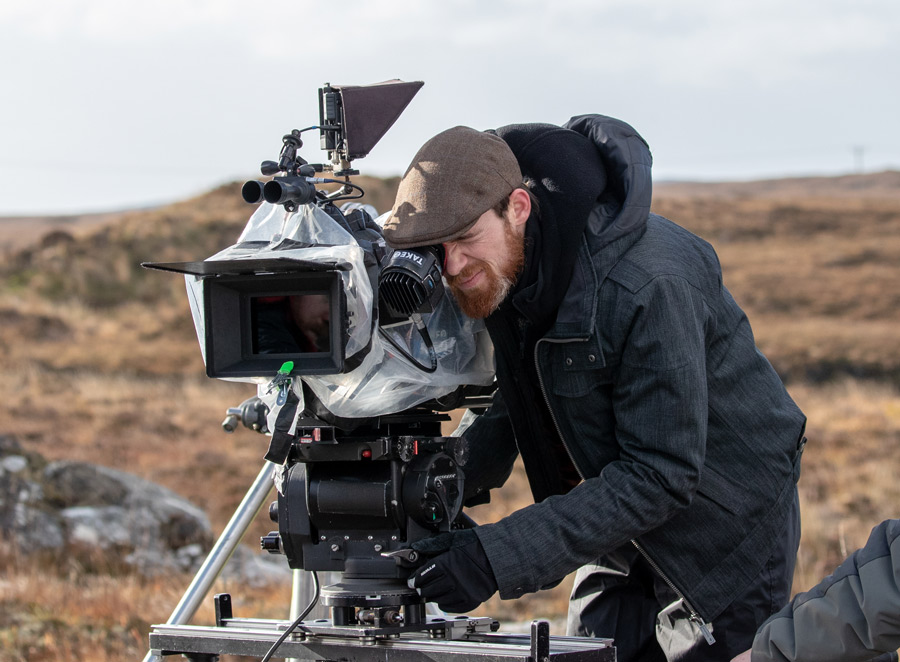 Cinematographer Nick Cooke on the set of Limbo.

Much of the film you shot in the Academy ratio. How did you develop this framing conceit?

The first thing Ben and I talked about after he sent me the script was how we could portray these characters in a state of limbo. We wanted these endless purgatory-like landscapes. We wanted to create this spatial sense that if they weren’t boxed in, they could go anywhere and do anything. We started thinking about how we would shoot the interiors to capture that feeling. Overall, we had two things that were at odds. We had these expansive horizons and these cramped interiors. We wanted the film to resonate with that opposition throughout. Going through a lot of photos, we realized that if we were to box in the frame through the majority of the film, that would allow us to have an expansive landscape and feel cramped at the same time. In the more box-like aspect ratio [of the Academy ratio], we could have wide landscapes and open skies, but also the interior scenes would feel more cramped and have more height. At the end of the film, we changed that framing, giving the viewer a more expansive perspective and allowing one to feel that the journey is coming to an end. In a way, the later change of aspect ratio provides a literal broadening of one’s horizon.

In developing the shooting style, did you look at the work of other filmmakers or photographers for inspiration?

We looked at a lot of photographs. We looked at the work of the German Fred Herzog, who took lots of photographs in Canada. We considered Czech photographer Josef Koudelka, who took photos across Europe. We also referenced a French photographer, Raymond Depardon, who took some amazing images in Glasgow. For films, we looked at the Wim Wenders’s movies that were shot by Robby Müller, especially in America. We didn't realize it at the time, but so many of our influences were people creating images in places that were not their homelands. 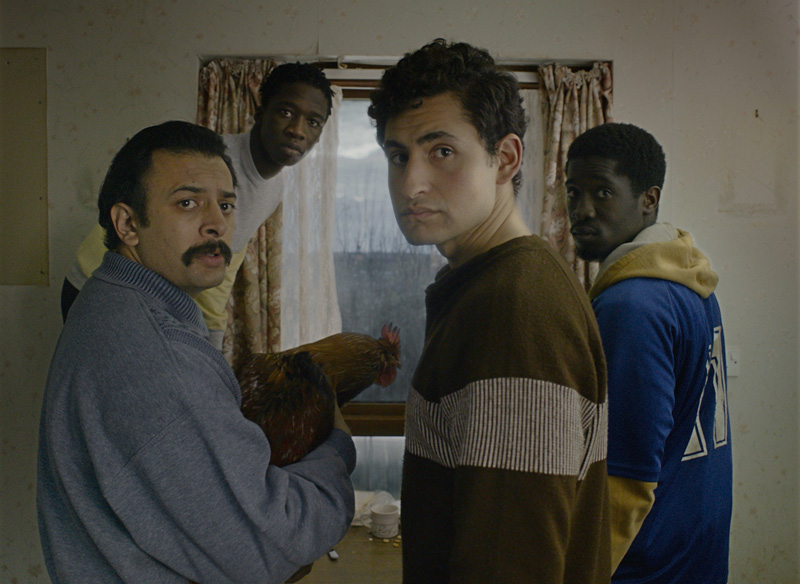 Each shot is composed in such a formal and distinctive way. What was the thinking behind that?

Ben wanted many shots, especially early in the film, to feel that everything had been picked up and deliberately placed in the scene. It is sort of what the characters are experiencing. They have been picked up from these war-torn areas and placed on this island. We wanted the composition to create that same feeling. We looked at a lot of locations that could generate that feeling. For example, the phone box by the side of the road feels like somebody just picked it up and placed it in this very odd location. There is a streetlight that makes you wonder, “why did someone put a light there?” We did that throughout the film. I think that by framing the shots so that the horizon is always in the center, and some object, like a streetlight, is in the middle, it heightens the feeling that these things have just been picked up and placed there arbitrarily.

How did you approach shooting the landscape on the island of Uist?

We could have shot the film on the mainland, but by going out to this island, the landscape really dictated a lot of the look of the film. In Scotland, the weather changes so quickly that in one take, you could be framing the mist rolling in, and then by take two, the winds blow up, and there's not a single cloud in the sky. In one way, the landscape was our friend, because it gave us so much variety. But the constantly changing weather also made each day a challenge.

Shooting on Uist was quite challenging. Can you share any stories from the experience?

I'm not going to pretend it was like The Revenant, but the weather made it tough. There was one shot where Amir was sitting in the grass on the edge of a sand dune. When we got to the top of the dune with our kit, the wind was so powerful that it was like one of those fast-swirling circus rides which pins everyone against the wall. But we had to get the shot. Amir sat facing the ocean with his eyes closed, and we framed him in close up. Ben asked Amir to look at the horizon, which he did for five seconds. When Ben said, “Amir, can you continuously look out at the horizon,” Amir responded, “I can only take so much sand in my eyes at any one time.” We got the shot in the end. 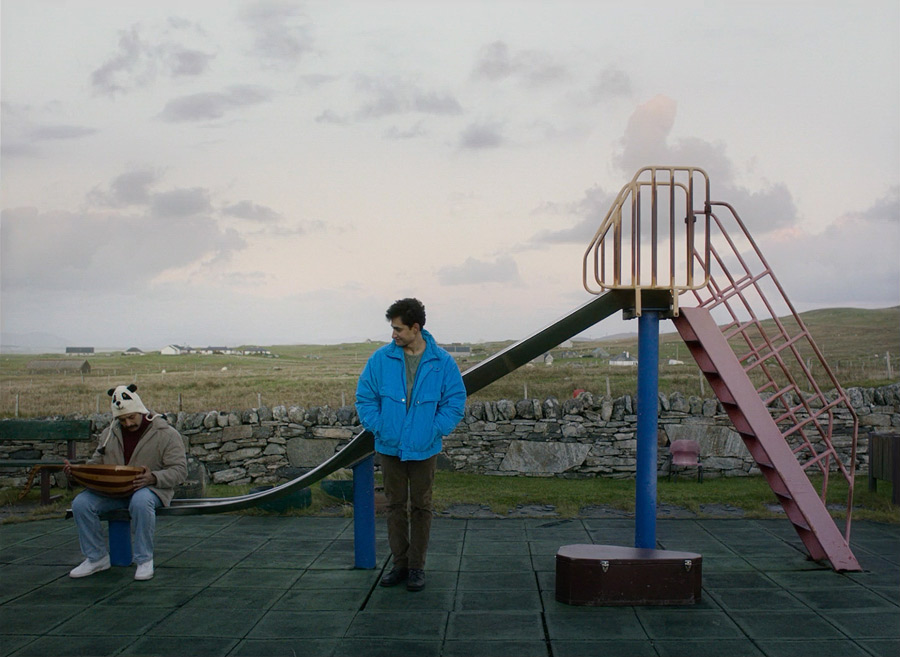 Did the island help define the film’s color palette?

The island itself gave us green and brown. The heather is white and purple, although the purple was more like a purplish brown. We added colors that were in the middle of that spectrum. On a color wheel, Omar's blue jacket is right in the middle, so it fits quite comfortably in the palette but also pops against the background. On the other side of those browns, you have pink. Our production designer, Andy Drummond, took those pinks, greens, and blues to create the Interiors.

What would you like the audience to take away from seeing Limbo?

There are so many misconceptions about what people from different countries are here for. My dream is that the film’s humor can allow people to forget about what they think asylum seekers are, so that they can be moved by the story.