In Michael Engler’s film Downton Abbey, the Crawley family faces a brand new challenge in 1927 when they receive a letter announcing a visit from the King and Queen of England. True to form, the upstairs and downstairs join forces to show off their beloved estate. At the bidding of Lady Mary (Michelle Dockery), the venerable Mr. Carson (Jim Carter) comes out of retirement to take command of the staff and make the Earl (Hugh Bonneville) and Duchess of Grantham (Elizabeth McGovern) proud. In bringing the romance, elegance, and drama of that beloved fictional Yorkshire estate to the big screen, the filmmakers also reunited the talented production team that made Downton Abbey must-watch TV. Five-time Emmy®-nominated production designer Donal Woods was tasked with making the estate even more spacious and grand. “Downton has always been about spectacle, and the movie doesn’t disappoint,” exclaims Refinery 29. “The sweeping shots of the estate and within the house itself highlight a grandeur appropriate for such pomp and circumstance.”

We spoke with Woods about the film's deeper opulence, how his designs subtly reflect historical change, and why fans love returning to Downton Abbey.

Downton Abbey is now playing in theaters. Get tickets to see it today.

Did you approach working on the film differently than the TV series?

Obviously there are a lot of givens for the film—we are still in Downton Abbey, which is mostly filmed at Highclere Castle. Many of the ground floor sets, such as the kitchen, the servants' hall, Carson's or Thomas' pantry, and the boot room, are still there. But those rooms have taken their toll over six years of a television series. They needed a total refurbishment. Upstairs, we totally redid the bedrooms. We updated the fabrics, the carpets, and the bedding. We wallpapered and re-plastered. For the film, we wanted the audience to feel like they had gotten something extra, something richer and more lavish. We just wanted to take everything to another level.

You also added some spaces that didn’t exist in the TV series?

There were a lot of rooms we wanted, but we had neither the time nor the space to create them before. For the film, we built a silver room, a servery (which is the room just before all the dishes are brought into the dining room), and a wine cellar, as well as extra bedrooms for the visiting servants. For Maud Bagshaw, Imelda Staunton’s character, we created a bedroom lined with red silk damask from India so as to give the film an even richer look.

In having worked on the TV series for so long, what lessons did you learn that you could apply to the film?

Mostly I think that in creating the spaces we wanted to stick to our core principle. While the story takes place in one house, there are really two different worlds. The above-stairs world—which includes all the staterooms, the bedrooms and the dining rooms—is done to look like a lavish Technicolor environment. The below-stairs world appears like a noir film. It is very restrained in its costumes, makeup, and color design.

The TV series starts in 1912 and the film takes place in 1927. In what ways do changes in the house reflect what is happening in the world outside?

It was really quite subtle. Over time, we brought in electrical items, like food mixers and hair dryers. In the film, we introduce a vacuum cleaner, which we see when they are cleaning up. Also in the servants hall we introduced a late 1920s radio. In the TV show, the upstairs family had a very crude radio. By 1927, however, radios were certainly more common. We also gave Lady Edith (Laura Carmichael) a slightly more modern telephone, a handset that you might actually recognize today. 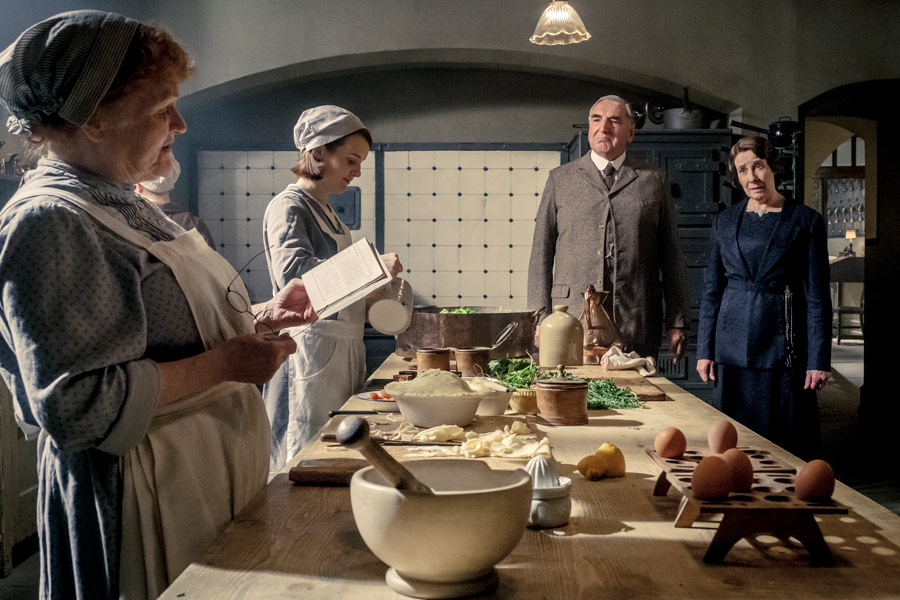 In addition to the estate, you created an array of public spaces. What sort of research did you do to depict the underground gay club and other spaces?

The underground gay club [which Thomas Barrow (Robert James-Collier) visits] was actually quite difficult to research. We found images of similar places in Paris, Berlin, and London. But most of them were police images because homosexuality was still a crime at that time. We worked really hard to get the look right, because we didn’t want it to feel like something out of Cabaret. One thing that is interesting in terms of research is the letter from the King and Queen that opens the film. It was very different from the ordinary letters of the time. Lord Harewood of Harewood House helped us out because he had some actual letters from the king and queen from that time. Our graphics department designed the letter we used based on those.

Absolutely we designed to fit the characters. Originally, we coordinated the rooms to match the look of the actors. Michelle Dockery  (who plays Lady Mary) has dark hair and pale skin. Very Celtic in that aspect. Edith is slightly subtler with softer tones. Once we saw all the actors and actresses that were going to be in those rooms, we, along with the costume department, formed an idea of what sort of rooms would fit them. Lady Mary always had strong colors. She started off with red which evolved into a rich green over the years. For Edith, we settled on terra cotta and more mid-range tones.

In working with others on the creative team, did you craft a color palette specifically for the film?

Costume designer Anna Robbins, Anne Oldham of makeup, and I agreed that we wanted to embrace the time of year in which the story takes place. So our palette reflected that golden feel of late summer. While English summers can be gloriously unpredictable, we luckily got four days of sunshine in September. We all also agreed to make everything more lavish. Where we might have painted, we wallpapered. Where we might have painted the moldings, we gilded them. We took everything up a few notches to give the audience an even bigger experience.

Can you talk about creating the grand ballroom for the dance at the end of the film?

The ball itself does not take place at Harewood House, which does not have a large enough ballroom. We went to Wentworth Woodhouse in the north of England. While their ballroom was magnificent, it had sadly fallen into disrepair. No one had really used the place for over 15 years. We had to carefully rebuild the space and the dance floor for the film. 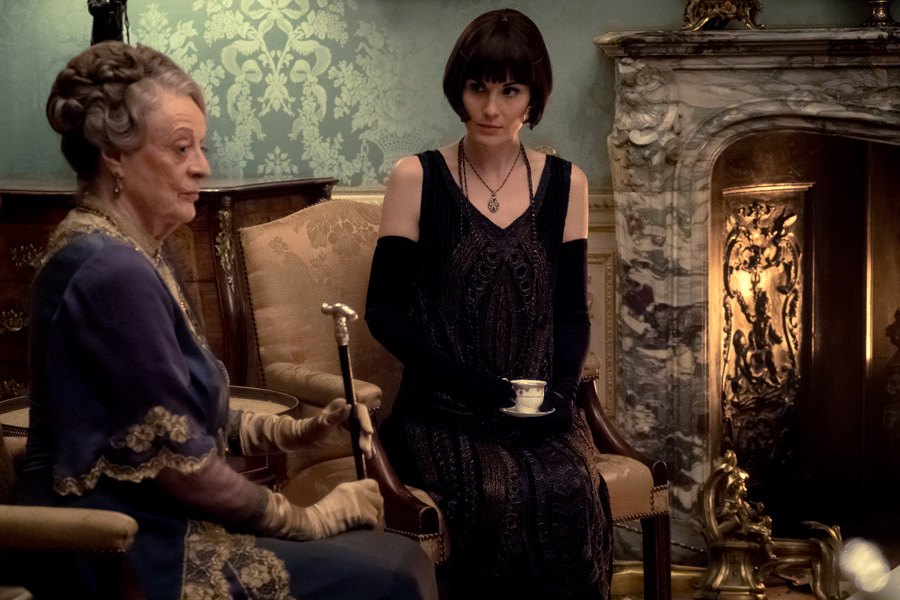 In the upstairs rooms, the production added more lavish finishes and coverings throughout for the film Downton Abbey

Many of Downton Abbey’s costumes have inspired fashion designers. Is that the same for the production design?

I know that midway through the TV series, fringes were suddenly coming back onto lamp shades. I actually got an award from a federation of Swedish antiques dealers for reviving antiques. In seems that the antique stores in Sweden saw a boost in business while the show was on. I have also been interviewed by flower magazines about how there is a new market for the traditional flower arrangements presented in the show.

Fans really love the show and its characters. What do you think makes Downton Abbey so beloved?

We would not be anywhere without the fantastic writing of Julian Fellowes. In a film, you would never think of having 17 different story lines, but he manages to weave them all together seamlessly and still wrap the entire thing up in an even larger story. But to be honest, I can’t tell you why the world has taken to this show. At the world premiere, the audience kept applauding throughout. It was a very moving experience. Ten years ago, the producer Liz Trubridge told me she was doing a TV series for ITV and PBS about a rich family with servants. I said, "Liz, it is one year after the global crash. Who on earth is going to watch that?" It shows you how much I know.