A Q&A with filmmaker Nisha Ganatra

Set in Los Angeles’ dazzling music scene, The High Note—which is now available at home on demand—follows two women at very different places in their careers. Maggie (Dakota Johnson), who works as music icon Grace Davis’ (Tracee Ellis Ross) personal assistant, is hungry to start her journey as a music producer. Davis, on the other hand, yearns to rekindle the passion she had as a young artist. In learning to trust themselves and follow their dreams, both women discover how much they also need each other. To bring out the film’s special heart and humor, the film’s producers turned to Nisha Ganatra. “She was the perfect match for this film,” exclaimed the film’s screenwriter Flora Greeson. “Nisha’s very good at telling very nuanced, smart, funny, sweet movies about women and how they go about in the world, and how they relate to each other.”

After making a splash with her debut comedy Chutney Popcorn in 1999, Ganatra honed her skills in both television and film. In directing TV comedies like Shameless, Better Things, Girls, and Dear White People, Ganatra demonstrated a unique talent for bringing out the humor of each show without losing any of its edge. As a producer and director of the groundbreaking series Transparent, Ganatra won a Golden Globe and was nominated for an Emmy®. Most recently, her comedy Late Night (with Emma Thompson and Mindy Kaling) became a hit on Amazon, garnering the highest streaming numbers of the year.

We spoke with Ganatra about what makes The High Note personal to her, how the film celebrates Los Angeles and its music industry, and how she hopes it will inspire other creative women.

What attracted you to directing The High Note?

Flora Greeson wrote this really beautiful, funny, moving story with two complex and interesting women as its lead characters. It was one of those classic studio films where you are encouraged to follow your dreams and rewarded in the end for taking the risk. Those are the movies I loved watching growing up. And the music was out of this world fantastic.

Your previous film Late Night, like The High Note, focused on women working in the entertainment industry. What makes that such a fascinating subject?

It is very personal. I remember the early struggle, desperately trying to be part of an industry that was not giving me any sign that they wanted me. Being in a creative field is such fun. Often movies on this subject make it look rather miserable.  With both films, I wanted to create a love song to working in this industry, to creativity and hard work. It’s easy to imagine that people make it simply by being lucky. I wanted to go behind the scenes to show the incredible amount of hard work needed to get this stuff done. All of these characters are really good at what they do, super smart, and work harder than anyone around them —which is why they made it.

How did you cast Maggie and Grace?

Dakota Johnson was already attached to the project when I came on. When I thought who could play Grace Davis, Tracee Ellis Ross was the only person I could think of. The character had to be funny, charming, have gravitas, and understand what it's like to be a music icon. Being the comic force that she is, Ross can play quirky as well as a boss who is sometimes a bit of a nightmare. Being Diana Ross' daughter, she brought a grounded, nuanced take on being a music icon.

Were there particular films that inspired your filmmaking style here?

All of Mike Nichols films, especially Working Girl. I also watched Broadcast News and Tootsie, as well as West Side Story. For its take on the loneliness of celebrity, I looked at Lost in Translation and 20 Feet from Stardom, a wonderful documentary about being so close to your dreams. I looked at Almost Famous and Jerry Maguire for they way they dealt with the relationship between a superstar and an outsider. Because we shot in Los Angeles, I watched La La Land. I really wanted to make sure our movie was a love song to the city and the music scene here. 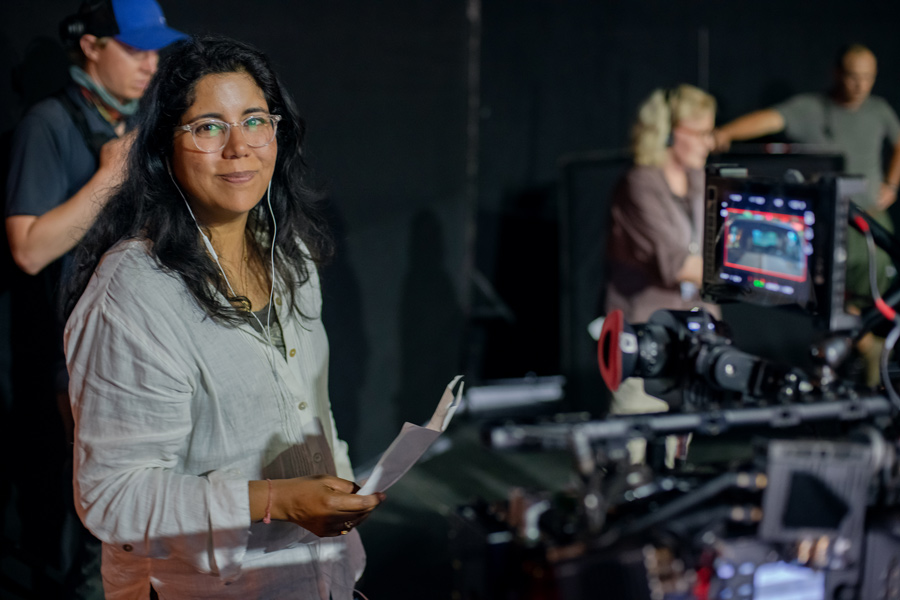 Director Nisha Ganatra on the set of The High Note.

The film beautifully captures both the look and feel of LA. Can you talk about how you created that?

I really wanted to show the uniqueness of the city. Maggie doesn’t meet David (Kelvin Harrison Jr.) in any grocery store, but the Laurel Canyon Market. I wanted that location because Laurel Canyon references such a cross-section of musical legends, from Joni Mitchel to Stevie Nicks to Jim Morrison. I didn’t want that typical shot of the palm trees coming down from the Hollywood sign. The film goes all over LA, from Griffin Park and Silver Lake to the East Side clubs. Of course, we fly down Sunset Boulevard past the Capitol Records Building, but we do it in a different way. The building serves as Grace Davis’ studio, which brought this extra level because so many great musicians were discovered and recorded there. We also wanted to show people in their environments. Grace Davis lives in this elegant house, for which we used Kelly Wearstler’s actual home.

You also capture that special golden light that defines being in Los Angeles.

Cinematographer Jason McCormick and I looked at Philip-Lorca diCorcia's photography for examples of that golden light in LA exteriors and interiors. Jason got his hands on this incredible set of lenses that nobody had used before in movies. After we did all these tests with them, I looked at the screen thinking, “I've never seen anything like this before.” With anamorphic lenses, the flares are normally oval but here the flares came in perfect circles. I thought, “It's like a record or the circular Capitol Records Building or David's circular home.” In the film, when people are talking about music, we move in a circular direction, evoking the movement of a record. I don’t know if anyone but film nerds will appreciate that.

How does production design reflect the LA music scene?

Production designer Theresa Guleserian and I worked a lot on this motif of glass. There is a lot of glass and reflections, especially in terms of whether you are inside or outside in the studio. Seeing what side of the glass Maggie was on—whether she was in the studio or simply looking in—became a measure for how close or far she was from her dream. 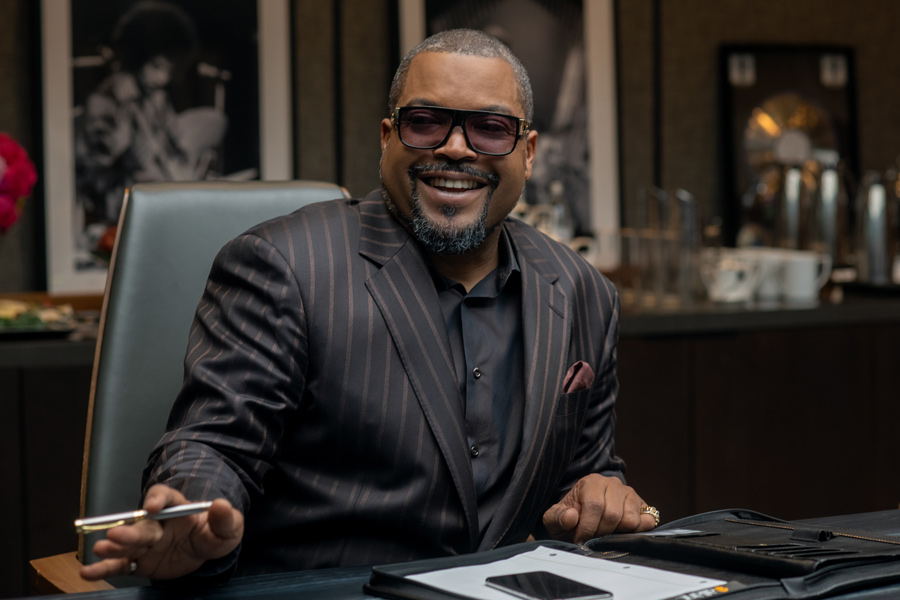 Ice Cube as Jack Robertson in The High Note.

Having been someone who struggled to succeed in the film business, how much did you relate to these characters?

I especially related to the way you can start off as a fan and work your way up. You grow up watching movies and listening to musicians, then one day you start working on the set of a music video or working as an assistant, and finally you think to yourself, “oh my god, I can't believe that I’m directing Ice Cube.” I love that you can start as a fan and eventually end up collaborating with your idols. On the other hand, there’s a way that you never really make it. Even though Grace is super successful, she’s told that she is becoming irrelevant because she’s getting older. When she wants to try something new, Jack (Ice Cube) tells her, “Don’t rock the boat. Let's just keep going the way we are.” Even at the top of their profession, these characters feel like outsiders.

What do you want people to feel after seeing this movie?

I hope the film inspires a generation of young women to do things like music producing. So many movies tell young women to be the star, to be the center of attention, to have followers and fans. This one says, "No, what you really want is to be part of the creative process." In the history of the Grammys®, there have only been three women who have been nominated for Producer of the Year. I hope this movie changes all that. I hope a lot of women get in there and start producing music. I hope it encourages people to think, “I'm going to work really hard and I'm going to follow my dreams.”