Love And Robots: How Brian and Charles Was Created

In many great pairs, each partner may be fine on its own but together they are more than the sum of their parts. In Jim Archer’s Brian and Charles (in theaters June 17), it’s the special relationship between man and robot that makes this couple so unforgettable. The same can be said of David Earl and Chris Hayward, the stars and co-screenwriters behind Brian and Charles. When Brian (Earl), an ingenious but lonely inventor, decides to create a robot from junk yard parts, his creation becomes so much more than he could have ever dreamed of. Before long, Charles (Hayward) is growing up and straining at the leash to explore the world outside their Welsh farm.

Earl, an actor/performer who has appeared on stage and in such TV shows as After Life and Derek, created Brian initially as a stage persona. Charles then joined Brian as a computer-generated voice. Producer Rupert Majendie used a voice-generating software to call into a radio show and speak with Brian as Charles. Eventually Hayward embodied the robot, dressing up as a 7-foot creature with a mannequin head. Audiences so loved the strange alchemy produced by this odd couple that Earl and Hayward further explored their characters in a short film, which became the basis for the feature film, Brian and Charles. As their story deepens, their relationship matures to become, as Thrillist noted, “adorably whimsical and downright touching.”

We sat down with Earl and Hayward to talk about how Brian and Charles met, how they relate to their characters, and where Charles might go next on his big adventure.

Get tickets for Brian and Charles now. 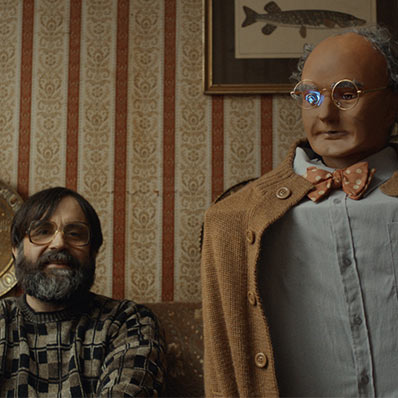 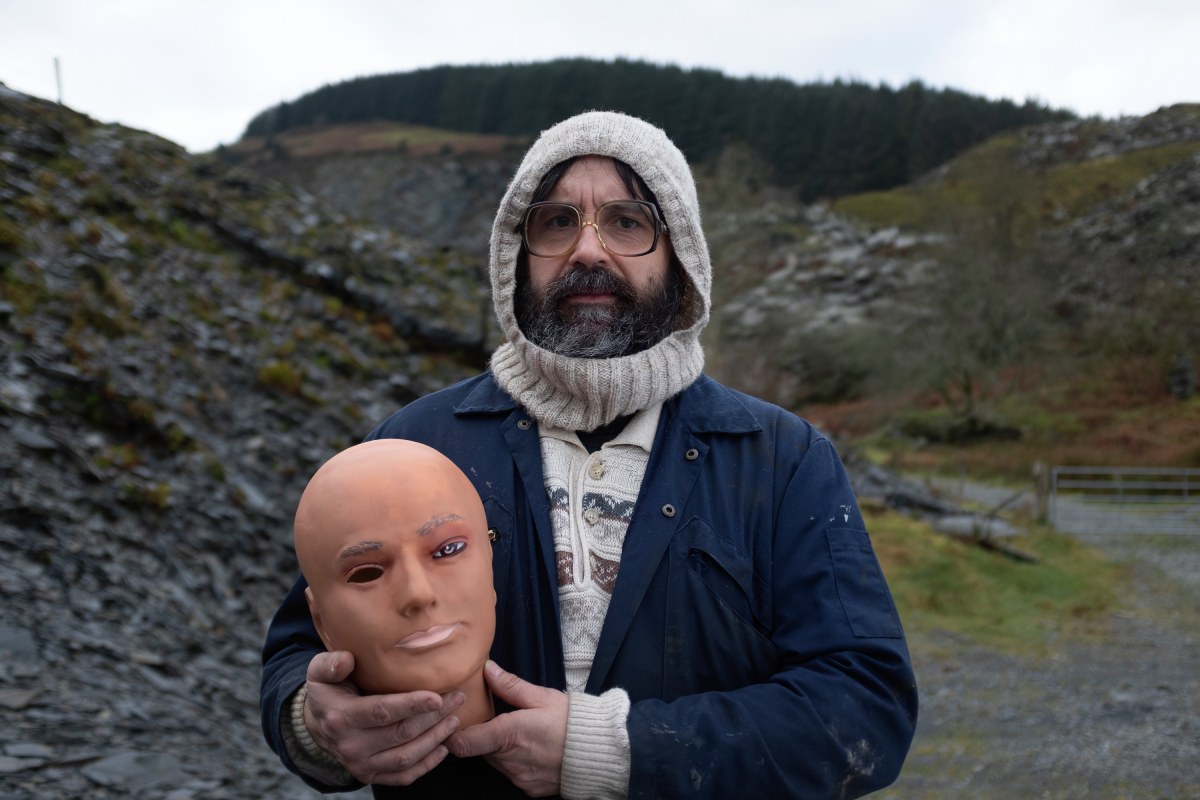 Brian came before Charles. David, where did the idea for Brian come from?

Earl: The first time I ever performed Brian was in my flat with a video camera. I’d been performing the character for years. On stage, Brian was a bad comedian who would tell bad jokes. Sometimes it would go well. And sometimes it wouldn't. I would get heckled a lot. I did that for about ten years.

Obviously, Brian was looking for Charles during those years. Chris, how did you get involved as Charles?

Hayward: David used to do a radio show during which people would call in and talk to him. Our friend and producer Rupert called in, but since he was too nervous to talk, he would use a software program to turn the comments he typed into various weird voices. The voice of Charles was so funny that I wanted to get involved and see what a live conversation between Brian and Charles would look like. On stage, I would dress up as Charles and Rupert would type away to create Charles’ computer voice. We did that for about two and a half years in a ramshackle comedy show.

Chris, how did you come up with Charles’ look?

Hayward: Rupert used to call the voice of Charles "the professor," so I initially pictured that. I just wanted Charles to look like a big bulky robot. I drew a sketch to work out his shape. Then, I got a big cardboard box. I'm about six foot so when I put this box on, I grew an extra foot in height. I got a mannequin head and then stuck one of those sticks you use to pick up litter into it to move the head about. The first time I dressed up as Charles I had a big pair of circus trousers. He looked perfectly ridiculous.

People have said Charles looks a little like Jim Broadbent.

Hayward: I wasn't aiming for Charles to look like Jim Broadbent but a lot of people have noticed the resemblance. The mannequin head I got on eBay turned out to be this big, bald head. I stuck some glasses on it and put a horseshoe of hair around the ears. We just want to create this freakish look so people who came to the live show would say, “What on Earth is that?"

Chris, can you describe how you control Charles’ movements?

Hayward: I have one arm sticking out of the box, but my other arm is a prop arm. That way I have a free arm to hold the stick up and make his head turn. When I’m inside Charles, I really can’t see anything, so I am constantly bumping into things.

How did you two write the screenplay?

Earl: The start of the relationship was on the radio show. Rupert would type out Charles’ dialogue to make words come out of the robot’s mouth while Brian patiently waited.

Hayward: In writing the film, we often typed Charles's dialogue into the computer program to get an idea of what it sounded like. If it was funny, Brian would respond. We wrote it like we were performing a live show.

When did you make the decision to turn their story into feature film?

Hayward: We created all kinds of different interactions with Charles and Brian. At one point, we tried to do a game show, but we couldn’t figure out what the game was about. We ended up shooting a short movie to get their interactions on tape and put them online. The film did incredibly well online, which brought us to the attention of Film Four. 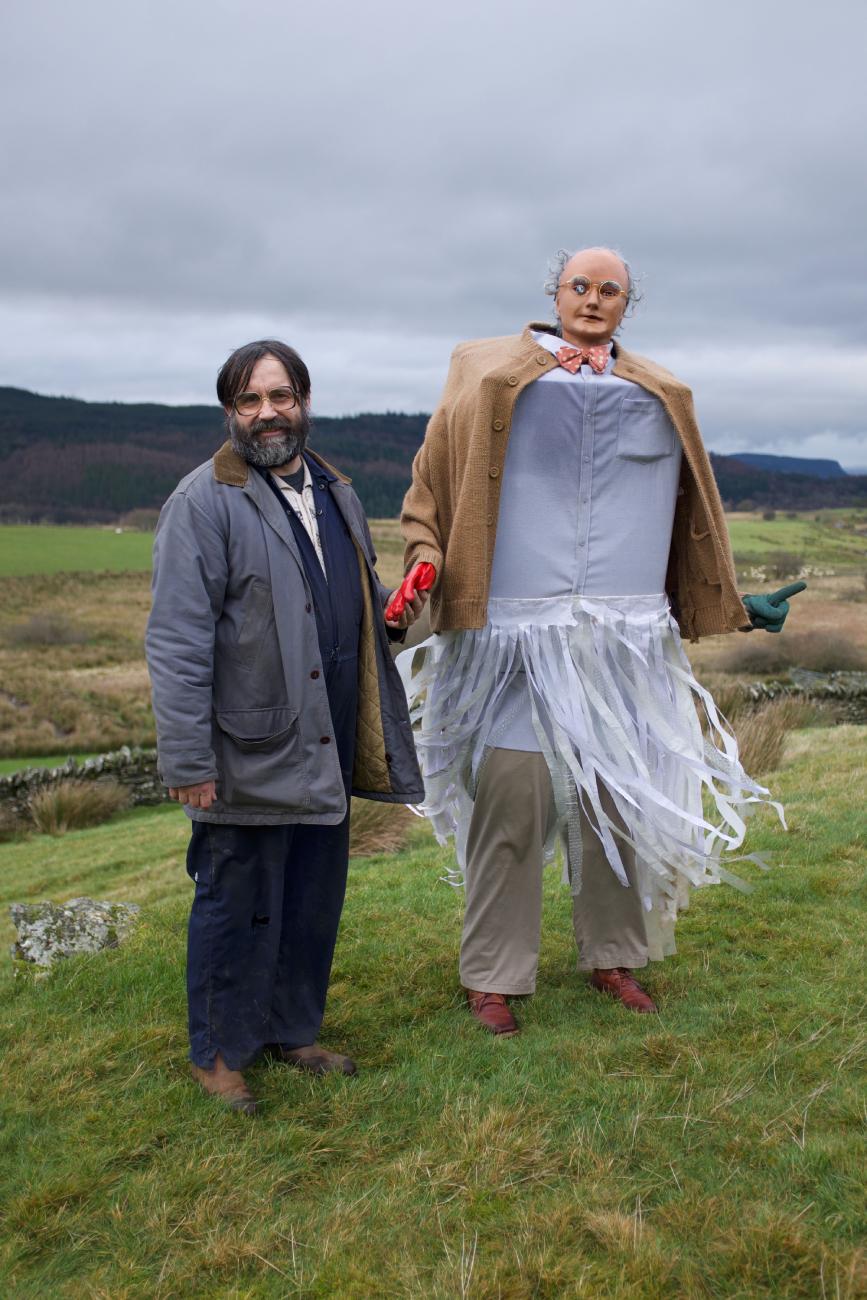 In watching the two interact on film, did you get a better sense of who you character was?

Hayward: There is a moment when Brian locks up Charles in the film. Watching that scene, you realize just how much you feel sorry for Charles. Even though he is an expressionless mannequin head, you can have all kinds of different emotions for him.

Earl: With Brian, we made a conscious decision to soften him. On film, we wanted to make Brian a bit more likable.

The story of men and robots is an honored tradition. Were there films or books that were inspirations for you?

Earl: People originally mentioned Frankenstein, but that never even crossed our minds.

Hayward: We looked at a lot of documentaries because we were trying to make this story feel real. As for their connection, we ultimately felt it was a sort of father/son relationship. That gave the film an extra dimension and a bit of heart as well. Watching Charles progress from being a little kid to becoming a bit more grown up and clashing with Brian gave the story a solid feeling.

Did treating Brian as a father figure change his character?

Earl: I have children—a 20-year-old son and two younger boys. I was kind of going through what Brian was going through when we wrote the script. There were a lot of opportunities to pluck knowledge from my own life and put it on screen.

How do you see the story of Charles continuing?

Hayward: I could imagine all sorts of things happening.

Earl: I think that Charles would bring back a lady to the house.

Hayward: I think a girlfriend for Charles would be particularly hilarious.

Earl: Brian would have to build a girlfriend for him.

Earl: I would like them to feel warm inside.