Family Histories: Writing On the Basis of Sex

Mimi Leder’s On the Basis of Sex—which opens in select theaters on December 25—focuses in on the early career of Ruth Bader Ginsburg (Felicity Jones) and the crucial case that helped change gender-discrimination laws. In 1972, the future Supreme Court justice and her husband, renowned tax attorney Martin Ginsburg (Armie Hammer), argued together before the 10th Circuit Court of Appeals in Denver a case about a man being discriminated against because of his gender. Screenwriter Daniel Stiepleman, who grew up calling these two lawyers Uncle Marty and Aunt Ruth, wanted not only to pay homage to a judicial icon, but also to the great romance that buoyed Ruth Bader Ginsburg throughout her life. Starting in 2011, Stiepleman crafted a suspenseful legal drama that was also a touching romance. Soon after being placed on the prestigious Black List, an annual survey of Hollywood executives' favorite unproduced screenplays, On the Basis of Sex was picked up for production.

We got the chance to talk with Stiepleman about the love story behind the legal drama, getting fact checked by the Notorious RBG, and why On the Basis of Sex offers hope for our contentious times.

How did you come to write On the Basis of Sex?

The inspiration came in 2010 at my Uncle Marty’s funeral when I first heard about this case. A friend of my uncle spoke about this being the only case that he and Ruth Bader Ginsburg argued together. At the time I was still pretty newly married, and my wife and I had decided that our role models for marriage were going to be Ruth and Marty. When I heard that there was this case they fought together in court while they were figuring out how to live at home, I knew that this was going to be my first professional screenplay. That was my first reaction. My second was, “Hold on a minute. You are at your uncle's funeral." After the funeral, the idea seemed a bit ghoulish, but I couldn't stop thinking about it. Scenes kept popping up in my head. A year later, I finally called Ruth and said, “I have this idea.” I told her I wanted the film to be about “on the basis of sex.” She told me there were bigger and better cases, ones that she argued before the Supreme Court. “But this is the only case you argued together,” I told her. She replied, “Well, if that's how you want to spend your time.” 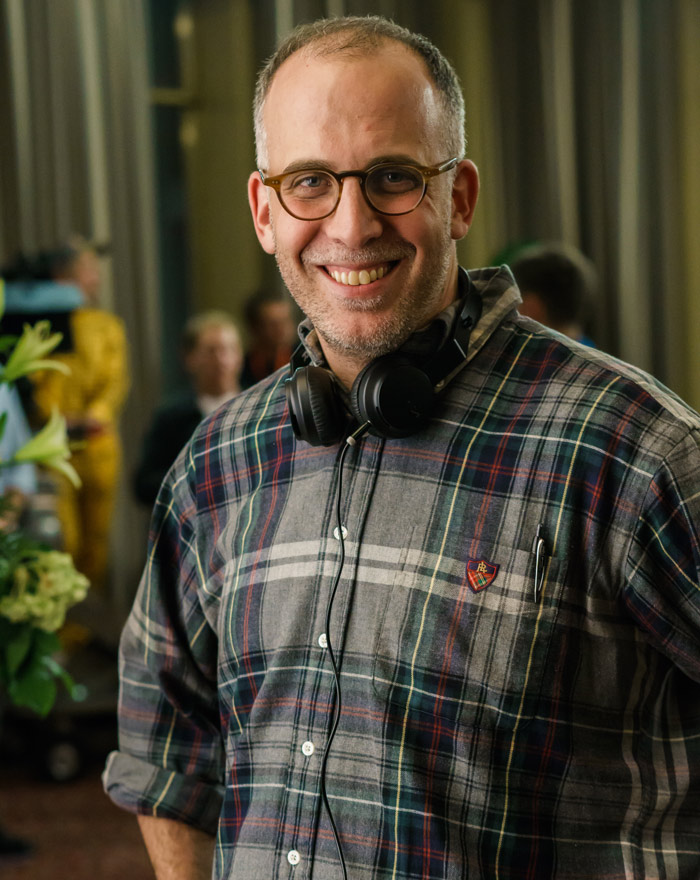 You had been a teacher for many years before writing this. Did being an educator inform how you wrote On the Basis of Sex?

Entirely. After I had gone to film school, I realized that at 21 I had never really done anything hard and had nothing important to say. So instead of moving to LA to start my career, I join the Peace Corps. My wife and I traveled the world as volunteers before I became a high school English teacher. While teaching in Oregon, I often invited my students to grade me at the same time I graded them. Once I got a D with a note saying, ”This is my favorite class, but let’s face it—it’s not like you really teach us anything. All we do is sit around and think about a lot of stuff that we never thought about before.” I think that was the greatest compliment I ever got. In writing the film, every time I came to a new scene, I asked myself, “Will the audience think about things they hadn't really thought about before?”

What sort of research did you do for the story?

When I started, I moved to Washington, D.C., since all her files from the 60s and 70s are in the Library of Congress. During the day, I combed through Ruth’s lecture notes from Rutgers, her reactions to other opinions, drafts of briefs she was working on, and such. At night, since I was staying with her, we would talk about what I had found that day, as well as things like marriage and raising kids. She also gave me about nine books to read. After about three months of research, I started writing.

How did your aunt, Justice Ginsburg, work with you to shape the screenplay?

I finished the first draft of the screenplay pretty quickly, and she gave me extensive notes that were kind of hilarious. She read it as if it were a contract. We'd go through it page by page, looking at every detail. Some things were small, like she told me she would not have worn heels at Harvard because she had to walk to school. Mostly she wanted the law and the way the law is practiced to be right. She never once gave me a note that came from a place of ego. She never commented that I didn’t make her look good. After two or three revisions, she was fine to let me finish it on my own. 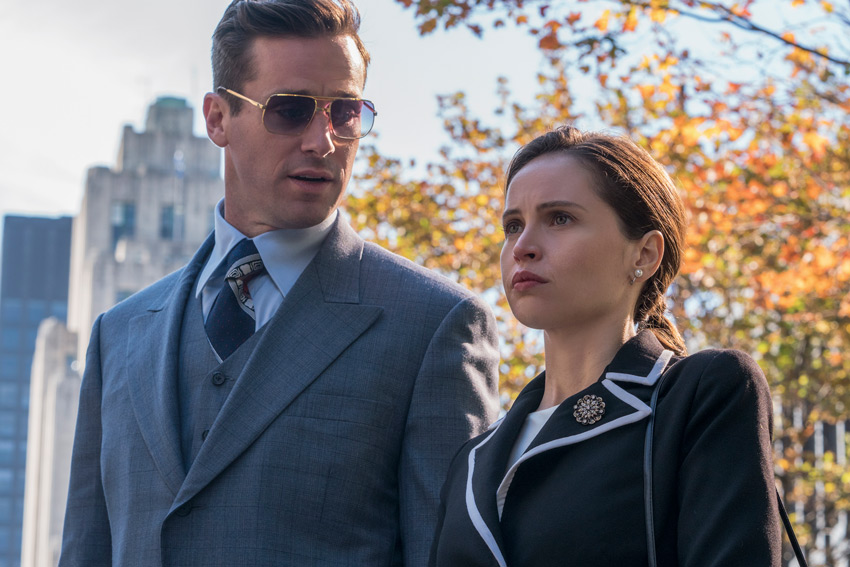 Justice Ginsburg commented about what worked in terms of the law, but did she have a sense of what worked dramatically?

She had a good sense of why things were the way I wrote them. But she didn't really care. She'd simply say, ”That's very dramatic and it works really well, but that is not the way the law is practiced.”

James [played by Callum Shoniker] was only five at the time of the story, so his participation was limited. But Jane [played by Cailee Spaeny] was very helpful. I credit her with making me a much better writer by teaching me to avoid clichés. When I suggested that she had been ignored because her parents were both working, she told me, "I would have killed to feel like I was ignored." As a first-time writer, I learned that the truth is so much more interesting than my instincts as a storyteller are, especially when those instincts are informed by previous movies rather than lived experience. 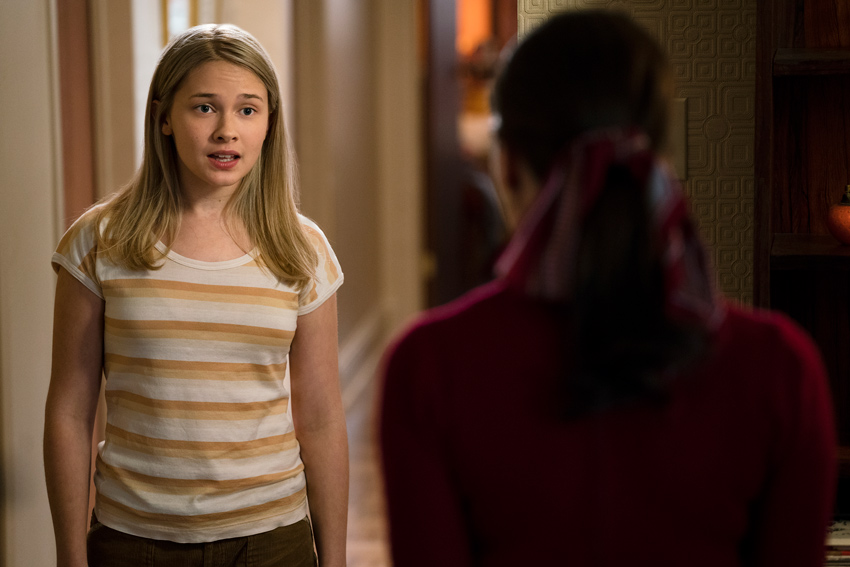 Jane Ginsburg (Cailee Spaeny) in On the Basis of Sex

Were there particular movies that were helpful in framing the story?

Yes, but not the movies I thought. Since I was writing a courtroom drama, I’d originally thought I’d re-watch The Verdict for the hundredth time. Only I realized this is not a courtroom drama. In a federal appeals court, you only go to court once. The model was more like Rocky, which is about a showdown between two powerhouses. I also looked at The King's Speech because it involves building to a climax about whether he can say what needs to be said at the moment.

Did knowing Ruth and others in the film personally pose a challenge for you?

More terrifying than challenging. Will these people hate me when it is all done? For some, markers of a film’s success are box office totals or audience reactions. For me, it was whether I was going to get invited to Thanksgiving next year. Once Ruth loved the film, everything else was icing on the cake. It is an intimate story, but I wasn't alive in the 70s. Ruth is my aunt, but she's also 50 years older than I am. I'm closer in age to her grandchildren. Part of the joy in writing this film was getting to know her better. And she got to know me as well.

How did Justice Ginsburg react to Felicity Jones playing her?

She loves Felicity. As someone who's known Ruth for a long time, I can tell you that Felicity’s portrayal of Ruth is uncanny, almost eerie. There's a very particular alchemy to Ruth's personality that she got. She can be steely and determined and, at the same time, joyous and full of optimism. I can't think of anybody else who could’ve captured that like Felicity did. There is a lovely story about Armie [Hammer| playing Marty. When my mom saw the film for the first time, she and Ruth were sitting next to each other. When Armie appeared on screen, she and my mother held hands for the rest of the movie.

Justice Ginsburg is such an American icon. What do you think makes her so important to people?

I think it's her authenticity. She is not a politician and does not want your vote. She's not trying to sell you anything. She didn't go to law school because she planned one day to be on the Supreme Court. When she speaks, you feel she's talking from her heart. She says what she really believes.

What do you hope people learn about your aunt from this film?

When I started, I thought this movie was going to be an introduction to my aunt. At the time, which was 2011, I figured no one knew who Ruth Bader Ginsburg was. This was before the Notorious RBG and all that. Ruth Bader Ginsburg changed the world by persuading the people who disagreed with her and not by trying to destroy them. I love the idea that we could reclaim that sentiment—that we could both try to persuade others and be open to persuasion ourselves. As opposed to thinking we know all the answers and we have to destroy anyone who disagrees with us. That ideal is what Ruth reveres about the court and the Constitution.