In The Northman, director/co-writer Robert Eggers recreates the world of the Vikings from the bottom up. Throwing away movie stereotypes and literary clichés, Eggers collaborated closely with historians and anthropologists to recreate a real portrait of that sophisticated culture ruled by honor and vengeance. The film follows the long voyage of revenge traveled by Amleth (Alexander Skarsgård), a Viking prince who witnessed the murder of his father, King Aurvandil (Ethan Hawke), as a child and the capture of his mother, Queen Gudrún (Nicole Kidman), by his uncle, Fjölnir (Claes Bang). His quest for vengeance takes him from viciously fighting in Slavic lands to sailing to the raw, resplendent landscape of Iceland to confront his enemy. Along the way, he encounters a young villager, Olga (Anya Taylor-Joy), and seeress (Björk), who help guide him.

To bring the craft and expertise needed to realize this fantastic enterprise, Eggers turned to costume designer Linda Muir, who had dressed his two earlier features, The Witch and The Lighthouse. Muir and team meticulously created authentic and stunning looks for the Vikings as well as the other cultures represented in the film. In the process, they reframed our conception of Vikings dress. As The Independent exclaimed, “Costumes crafted by…Linda Muir put any of the film’s contemporaries to shame.”

We spoke with Muir about how she researched the Vikings wardrobe, crafted individual looks for Kidman, Taylor-Joy, and Björk, and revolutionized the way we will imagine Valkyries from now on.

You’ve worked with Eggers on all three of his features. How is it to collaborate with him?

The best. He's prepared. He's passionate about what he has written. He is completely able to prep you with everything that he has learned about whatever period the project is set in. When I went off to do my own research, he was more than happy to embrace and incorporate it. There isn't a lot of ego between us, so it is the best possible collaboration. 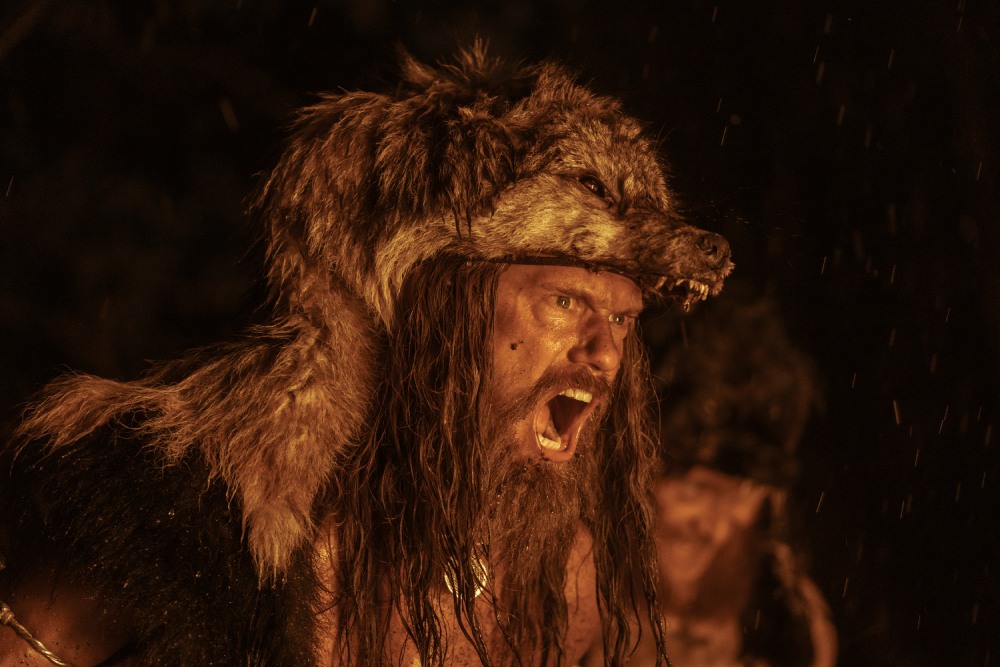 Alexander Skarsgård as Amleth in The Northman

When you read the script, did you have any initial thoughts about costuming?

Not initially, because I realized that I knew next to nothing factual about the Vikings. I started by reading the sagas. Then I broke down the script and started asking questions. Robert filled me in on massive amounts of Viking history, as well as on the backstories of the characters. I started working months before the official prep began. I sent out emails out into the ether asking everyone and anyone about material, asking weavers about hand-woven patterned wools that would be a good representation of what the Vikings would have used. Then there was endless sourcing of fabrics. I learned about medieval cuts and tried to figure out from archaeological finds about costume construction. Outside of the Orkney hood, which was what we based parts of Heimir's (Willem Dafoe) costume on, there really isn't a complete Viking garment. There are bits and pieces of different things. I became as familiar as possible with different artifacts.

Then our actual prep began in Belfast. I gave the costume department crew all my information, answered their questions, and showed off sketches. The aesthetic that Robert developed is very unique. Preconceived notions of Viking garb involve lots of leather, lots of fur and feathers. That was not what we were trying to create. We were really embracing hand-sewn costumes and trim.

In your research, did you come to understand how clothes were used by the Vikings? Were they purely functional? Did they denote status? Were they worn for sex appeal?

Yes to all three. That was exactly one of my first questions to [historian] Neil Price. There was a very long pause before he said, “No one's ever asked me that before.” Specifically, I wanted to know how Queen Gudrún, Nicole Kidman's character, would have expressed sex appeal. Price was fantastic at helping me understand what she would have worn and why. If you wanted to show high status, excess really meant that you had the wealth to have people weave very warm wools or to have people use these crazy, multiple tablet devices to make these beautiful trims which might incorporate coiled gold or a gold thread. They would often sew precious metals into the outfits. Tiny bits of silk, either close to the metal in brooches or on the clothing, has been found in Viking clothing. These were not used for a flowing silk gown, but used in very small pieces that were used as trim. The pieces of silk would have caught the light and it would have reflected light differently than the very thick wool used just to keep people warm.

More than anything, we believe that color denoted high status. To get really rich dense colors from plant-based dyes, you had to continually over-dye. Each of the woman’s costumes started with a shift, typically linen worn against the skin. For Nicole's character, we made twenty of the same linen shifts to accommodate all of the different aspects of filming (like changing the color for night). They all had hand-sewn details on them. If next to your linen shift, you had one wool dress, that was great. If you have two wool dresses and a wool apron and a cloak lined with fur, that was really something.

Going through some characters, can you talk about how their costume defined them? For example, Queen Gudrún?

We see both Nicole's character and Fjölnir in two different time periods. First in 895 AD, then 20 years later under very different circumstances. At the start, she's a queen, so there is color and excess in her clothing. And there is lots of accessorizing. She has beautiful thigh-high red socks which we see when she is being dressed. She has pleated linen which would have been very time consuming to create. In the first part, she is literally a trophy wife for King Aurvandil. At Fjölnir's farm decades later, she is a secure, happy farmwife, so her clothing is different. Her clothing now is practical and well-made. But it's still beautiful and has a certain degree of high-status. 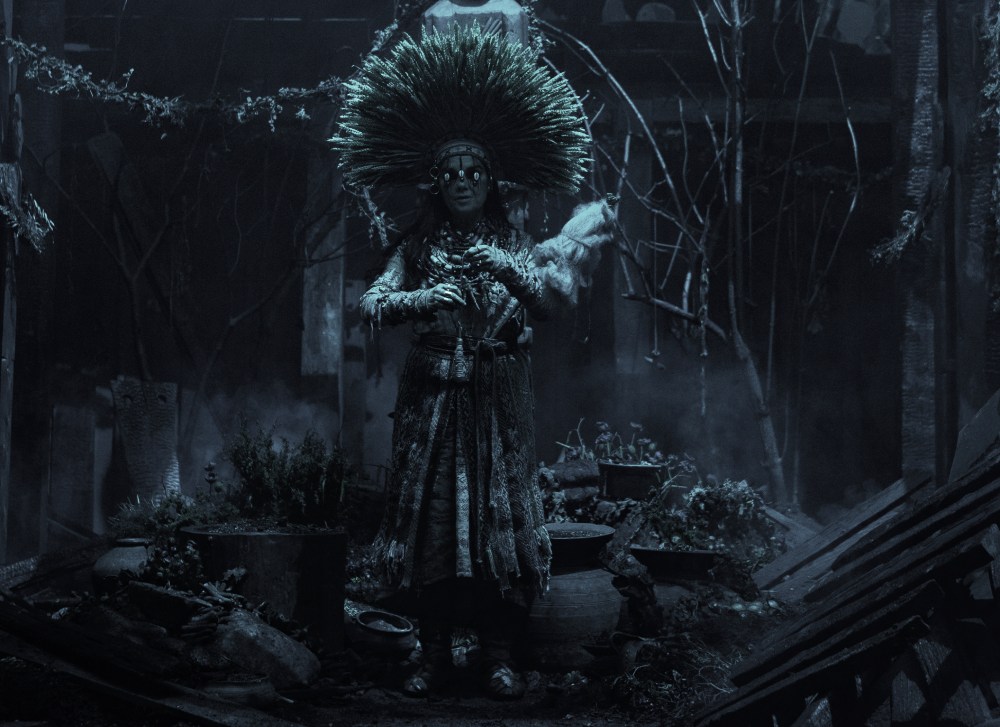 Björk as the Seeress in The Northman

What do we learn from the costume of the seeress played by Björk?

If women in the villages were writing the wishes for their families with their embroidery, Björk as the local witch was the uber-writer and completely covered in embroidery. The cowrie shells over her eyes were a fertility symbol from the time and the bells were there to ward off evil spirits. Villagers, especially the wealthier ones, that came to ask about their personal fortune would bring her gifts, like her prominent temporal rings and her amazing barley headdress with embroidered motifs on the front and the back. 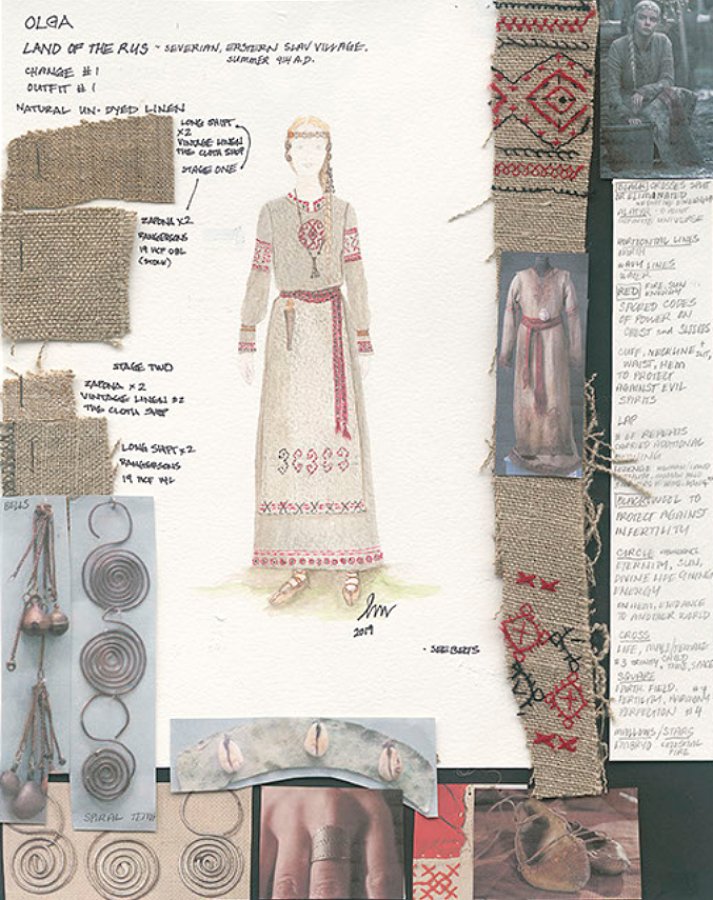 Sketch board for Olga's (Any Taylor-Joy) costume

How about Olga, who is played by Anya Taylor-Joy?

The Slav clothing was incredibly fascinating to research. The different tribes all around the area which is now sadly the Ukraine and would embroider both male and female clothing. Women’s clothing was embroidered at the wrist, hem, and neckline with different motifs which all had different meanings. The word for embroidery at the time was the same for writing. They were writing on their clothing their wishes for their family and for themselves—be it prosperity, children, health, good crops, etc. At the start, Olga’s clothing reflected her village’s culture. Women wore a temporal ring shape which is a large earring type thing that hangs from their headband. Unmarried women wore a tunic overpiece called a zapona. When Olga makes the trip to Iceland with Amleth and the other slaves, we created two different versions of distressed garments to mark her progress. As a slave, her costume is roughly made of hemp and wool. With her, I needed to keep the line appropriate both to her being a leading lady and to the period and her position. Because of the cold, I created barefoot shoes for the slaves, which were basically toed shoes painted to look like flesh. Anya was so up for the role that she often went barefoot despite the weather. 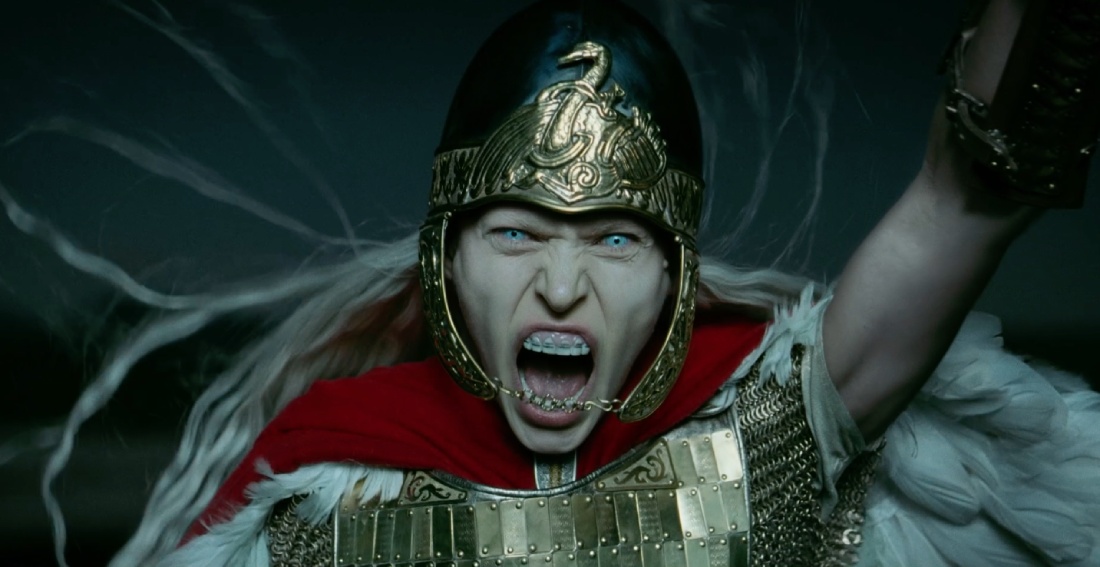 Ineta Sliuzaite as Valkyria in The Northman

You create a stunning version of a Valkyrie. How did that costume come together?

By writing exactly what happened at that particular period, Robert really enables people to see historical women, both in the inequity they suffered and in their historic accomplishments. With the Valkyrie, we looked at examples from the sagas. I also thought a lot about the Norns [ancient Viking women who control fate]. They don't weave thread, but intestines in determining people’s fates. It's gory and visceral. I was thrilled that Robert imbued the Valkyrie with a ferocity. My first sense for how to dress her came from finding tiny metal plates in a drawer in Rome. Her armor is not the heavy lamellar that some of the warriors wore. It's delicate and made of gold with a swan relief on her helmet. We created the red cloak so that it could capture her grandeur. We lined the interior with three different sizes of feathers which gave it this incredibly beautiful weight when she's riding on the horse into the heavens. 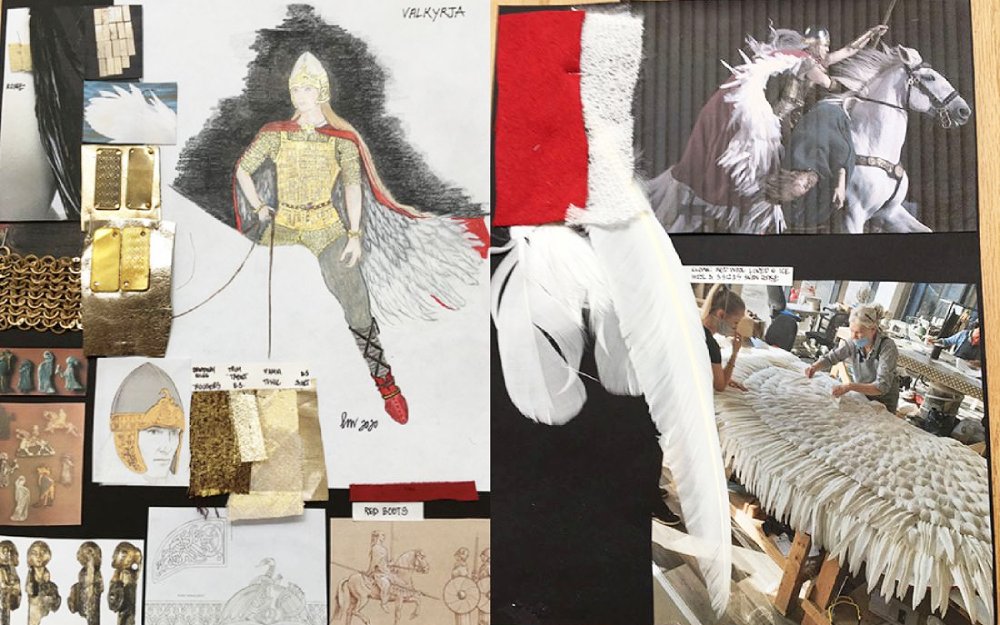 Sketch board for the Valkyrie costume

While we were developing her look, there were several significant things that came to light at the same time. Authorities confirmed through DNA that grave BJ 581 in Birka, Sweden, contained a Viking female warrior, something that was unheard of. Also, a recent book came out that described how bodies found around Gotland, Sweden, had their teeth filed. When Robert came back with the idea of incorporating filed teeth for the Valkyrie, I was, "Oh yeah!"