From Dowdy To Dior: Creating The Costumes For Mrs. Harris Goes to Paris

In Anthony Fabian’s Mrs. Harris Goes to Paris, Lesley Manville plays the title character, a London cleaning woman who finds a new goal in life when she spies a Dior gown in a wealthy client’s closet. Scrimping and saving, Mrs. Harris puts away enough cash to travel to Paris and purchase her own Dior original, only it will take more than moxie and money to realize her dreams. Despite being thwarted by Dior’s formidable Madame Colbert (Isabelle Huppert), Mrs. Harris perseveres with a little help from a model, Natasha (Alba Baptista), and the firm’s accountant, André (Lucas Bravo).

In a film in which clothes define class and creativity, costume design was essential. “I always knew this was a costume designer’s dream,” states Fabian. The filmmaker sought out Jenny Beavan, whom Fabian describes as “one of the greatest costume designers Britain has ever produced.” In the last forty years, Beavan has been nominated for eleven and won three Academy Awards®. Having created the  looks for films like Gosford Park, A Room with a View, Sense and Sensibility, and Mad Max: Fury Road, Beavan instinctually knew how to blend haute couture and character development to best tell the story of Mrs. Harris.

We spoke with Beavan about studying the fashion of the 1950s, working with the House of Dior, and bringing joy to the story through clothes.

The latest episode of Dressed for Mrs. Harris Goes to Paris

How did you get involved working on the film? Did you know the novel?

I knew a few books by Paul Gallico but not Mrs. 'Arris Goes to Paris. Our story is a little bit more developed than that novel. I got involved because Anthony Fabian asked me. Also, I adore working with Lesley Manville. Her being in the film was a definite plus for me.

As a costume designer, were you inspired to work on a film about a woman obsessed with a Dior gown?

I found the story very charming, but the last thing I would be inspired by is a Dior gown. Fashion is not my thing. But here fashion is such an integral part of the story that I found the whole thing fascinating. I ended up doing a lot of research on Dior and working with the archive—all stuff that I adore.

You’ve created costumes for period films across history. What was interesting to you about working in 1950s England and France?

I personally remember the 50s. Maybe not 1950 itself, but by 1957 I had memories of the period. It was rather fun to go back and visit what my family was wearing then. They were musicians, which was not at all a well-paid profession. We lived in a basement flat in Kensington. Like other families, we didn't have a lot of clothes but those we had we cared for. It was a simpler time because the clothes you had were so much simpler. For that reason alone, Mrs. Harris seeing a Dior gown for the first time would have had so much more impact on her than it would today.

Was the fashion of the time interesting to you?

Only in terms of telling the story. I loved the characters like Mrs. Harris and her Jamaican friend, Vi. When I was younger, we had a Jamaican nanny who became a really good family friend. In terms of actual fashion, I remember my mother getting a frock with a cinched-in waist and big skirt that was very New Look inspired. At the time, I don't think I took much notice of fashion since I was such a tomboy. Looking back, I can see what a great time of change it was and how Dior in this post-war period did his bit to bring some joy into people's lives. 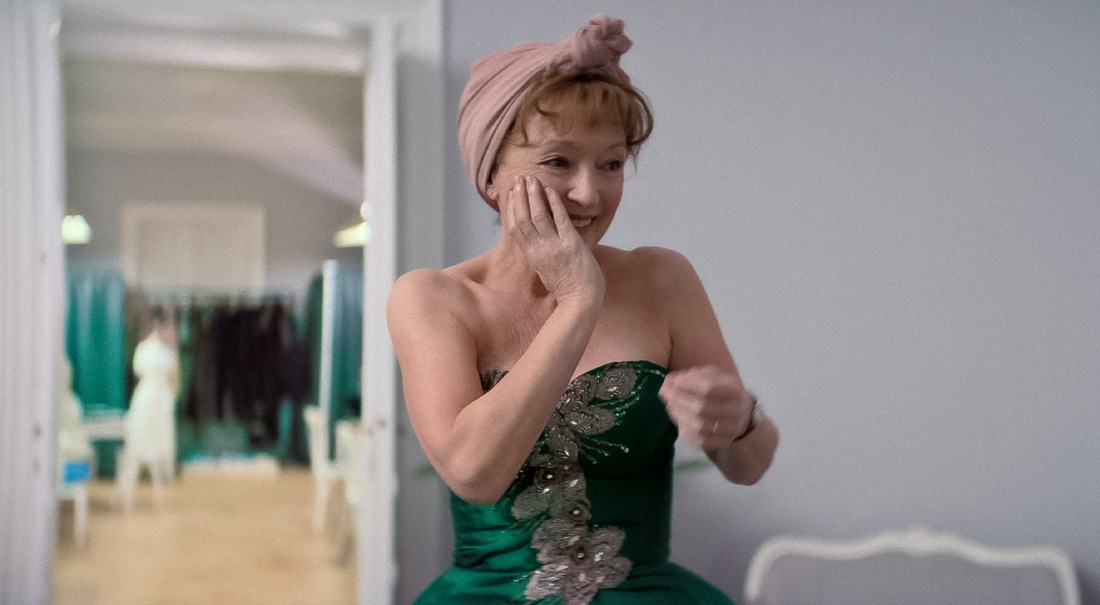 Lesley Manville in the Venus gown in Mrs. Harris Goes to Paris

In the fashion show, how many gowns were original Dior, replicas, or created by you?

There were five from Dior, but they were not original to the fifties. They were Dior recreations from the archive’s heritage collection. I created three gowns. And the rest were recreations from photographs and Dior's book of the period. In the book, each gown had a drawing done by Dior, a fabric sample, and notes about the design. Luckily, I had the skills of John Bright and Jane Law to fabricate these gowns. It was a lot of work. Because of Covid, we didn't have anything like enough fittings for the costumes. A lot of the dresses were made to measure and fitted in Budapest the day before we shot with them.

How did you design the two gowns, Temptation and Venus, that Mrs. Harris chooses from the runway show?

First of all, Mrs. Harris had to fall for them, so they had to have color. One of the dresses I had seen in the archives which was from the 1950s was a red dress with the most amazing sequins. I believe that all of them were hand-sewn over the entire dress. In creating Mrs. Harris' first choice, Temptation, we made it crimson red, but hand-sewn sequins were beyond our capabilities. I got a sample from the North of England that I thought would work. It would have the feel of Dior and was the closest we could come to recreating this particular dress I’d seen in Paris. The green dress, Venus, which was her second choice, had to look good on her but also had to look good on Rose and be able to burn. The funny thing is that I chose a toile because I assumed it would flame up, but when it came to igniting, it would not burn. The silk burned, but not the toile. 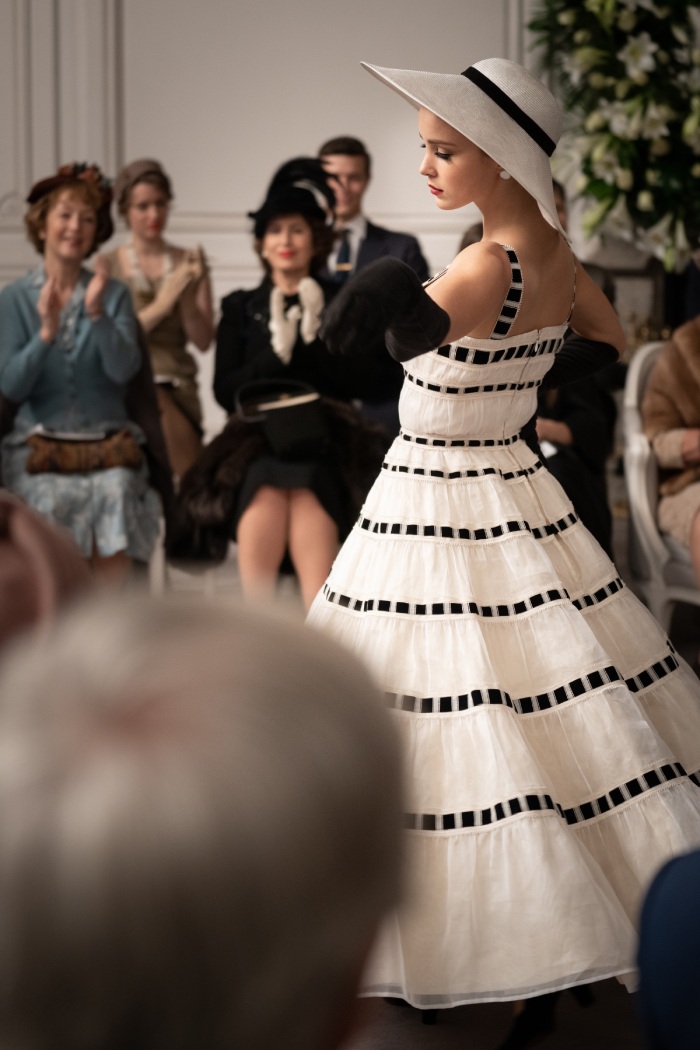 The Dior fashion show in Mrs Harris Goes to Paris

Many of the characters, like Mrs. Harris and Natasha, have two looks—Dior fashion and their everyday garb. How did these characters two modes of dress play off each other?

That's the fun of the job. That is what I do. It's very important that you know who the actor is but you also take each character and figure out who they are. When I read the script, I always see the action and characters in my head. Then I go to someplace like Cosprop and pull clothes that feel right. Of course, I do mood boards for each character. Audrey Hepburn, for example, was a reference for Natasha.

Yes. Exactly. I pulled samples of what might work for all the characters, both the English and the French actors who could not come to England because of Covid. With the characters of Natasha and Mrs. Harris, it is not so much me creating a juxtaposition in their costumes as finding what comes naturally to the character. It is just about finding the right clothes to support the story that character is telling.

When Mrs. Harris puts on the Dior gown, there is a bit of a Cinderella effect.

Yes, because that is what the story is. She is like a chrysalis turning into a butterfly. She has got to look sparkly and amazing. But Lesley has a fabulous shape anyhow. Even as Mrs. Harris, she's always neat and well put together.

Manville is always beautiful, but she really stands out in the Dior.

That is the thing about those gowns. They enhance a woman's shape. They are built on corsets so you do keep a really good waist and a firm position of the bust. And you have the skirt which enhances the hips.

How did you dress the French and English differently in the film?

A lot of the French costumes are centered around the house of Dior: the clients going to see the show, the staff who work there, etc. Obviously, it is a much higher class of person who can afford Dior, so the French were generally better dressed. Most of the English, either at the pub and dog races, were working class.

A glow. A journalist just told me she wept through the the whole film. I'm not quite sure that is what we were going for. I just hope people see that you can live your dream if you really want it. I remember meeting a woman from Tokyo who told me that whenever she is depressed, she watches A Room With a View. It cheered her up. Her comments made me feel that at least I'm doing something that's good for people. I'd rather hope this film might do the same.