Standing Up: On the Basis of Sex’s Fashion Style

Mimi Leder’s On the Basis of Sex, which covers three formidable decades in the life of Ruth Bader Ginsburg (Felicity Jones) and her husband Martin (Armie Hammer), also visually chronicles America’s changing identity. From the repressive mores of the fifties to the liberated attitudes of the sixties and seventies, this cultural shift is not just the background to the story but also a key part of Ginsburg’s argument against sex discrimination—the country has changed, so the laws should change as well. To illustrate this sartorially, costume designer Isis Mussenden worked hand-in-hand with the film’s creative team to create outfits for Ruth Bader Ginsburg that capture her unique dynamism and sense of justice.

We spoke with Mussenden about creating costumes for the various eras, finding Justice Ginsburg's unique style, and discovering the corn-blue dress that set her apart from her Harvard class.

What did you see as the biggest creative challenge in creating costumes for the film?

The film takes place in two different eras, and we had to show the contrast between them. We have a very conservative fifties where there are nine women in an entire class at Harvard. Or a few years later when Ruth can’t get a job in a law firm, even though she was at the top of her class. Then we jump to the 70s where the rules have been broken.

How would you characterize the fashion in the fifties?

In the fifties there was the “New Look,” with the silhouette being very tight at the top and a very full skirt below. These dresses take up to four or five yards of fabric to make, which contrasts with the forties, which was a wartime era and fabric was scarce. The “New Look” outfits illustrate [that] we are in a more prosperous time. We see our character Ruth Bader Ginsburg as a young mother in 1956, but that look changes three years later when she starts looking for a job. Then she takes on a much more womanly silhouette with a pencil skirt, a look that captures her new maturity.

And the fashion of the seventies?

The beauty of the seventies is that all the rules are broken. While there was still a conservative layover from the sixties, generally everyone wore whatever they wanted. A lot of ethnic clothing came in with people wearing dashikis and Mexican blanket shirts. There are lots of short, midi, and maxi skirts. In New York, when all the rules went out the window, Ruth saw how the culture had changed, even if the laws hadn’t.

Did you get to meet with Justice Ginsburg to get a sense of her style?

Unfortunately I didn't get to meet with her until the last day of shooting when we dressed her for the end of the film. Before I got the job, I searched for every picture I could find of Justice Ginsburg from the very beginning to 2017. I wanted to get an idea of how she dressed, what she wore, and how she did her hair. It became very clear looking at all the photographs she had a great fashion sense. As an Upper East Side woman, she knew what was going on. She wore big shoulder pads in eighties, double-breasted suit jackets in the nineties, beautifully cut pieces in the fifties. While we didn’t have a lot of photos of her, I could instantly see that she cared what she wore and she was on point with her fashion. She never wore glasses until she was much older and needed them. Also she never lost her femininity. She never dressed like a man, nor felt that she had to dress like a man. She had a classic sense of femininity. She was consistently fighting the gender wars, but she did it her way. 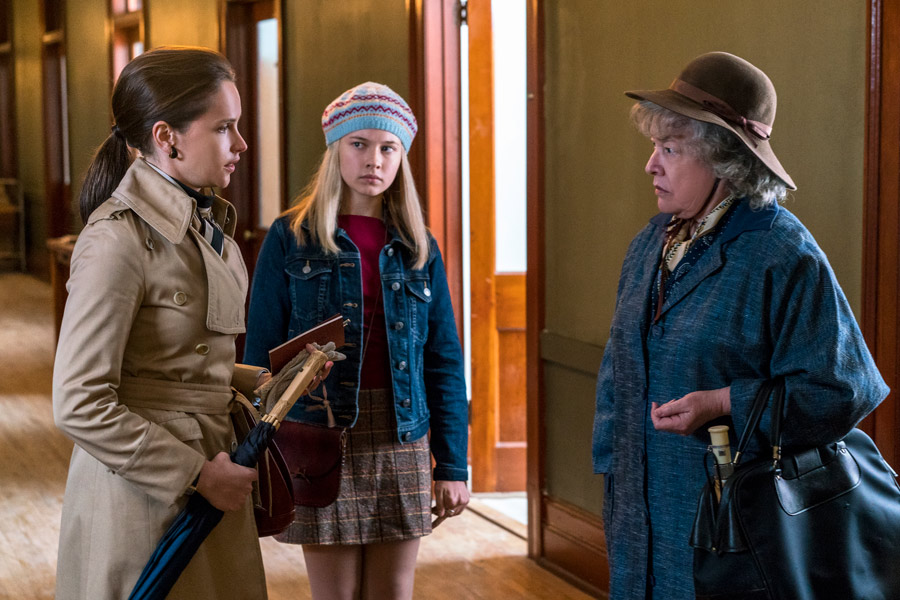 Felicity Jones, Cailee Spaeny, and Kathy Bates show off seventies fashion in On the Basis of Sex

Did it make you nervous creating outfits for a living legend?

Now that you mention it, maybe I should have been. I don't think I've ever dressed anyone who's alive before. But I felt ok because I so loved her sense of style.

Was there a narrative arc for Ruth Bader Ginsburg in the costumes you created for her?

There were really two. The first was in her going from being a young woman married with a child to her being a professional looking for a job. The second was in the seventies when she went from being a college professor in the classroom to arguing a case in a courtroom. When she was teaching at Rutgers, you will never see her in a suit. But when she is in court, she ups her game. Dressing her for court was a little tough because we could not find a single image of a woman pleading a case in a courtroom in the early seventies. Beyond finding documentation of Justice Ginsburg, we couldn’t find images of any female lawyers. We had no idea what female lawyers wore in court. So we took a bit of artistic license to create her suit. We looked at lots of ugly suits from the seventies, but then we found this Yves Saint Laurent dress on which we based Ruth's courtroom suit. Originally we wanted a strong color for it, but I decided on black and white, which would be reminiscent of the robes and white collars she wears now in the Supreme Court. 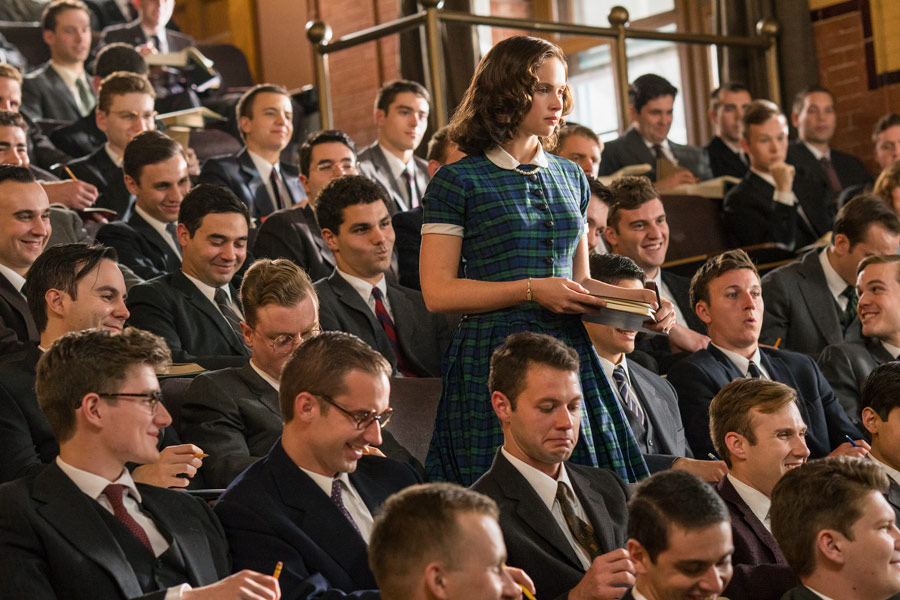 Working with production designer Nelson Coates, did you come up with specific palettes for the various historical eras?

In the seventies, we worked with a very specific palette, which was rusts, greens, and golds. You think of seventies appliances, and you think of avocado green and harvest gold. For the Harvard period, we got a yearbook from 1956, when she was a freshman and Martin was a sophomore. In showing that period, we wanted to capture the sense that she was a one-woman dynamo fighting her way through a sea of men. The men wore greys, blacks, and some dark blues, and Ruth had that blue dress. I was going to dye a piece of fabric to get the blue of Ruth’s dress, but then I found this vintage wool from Western Costume to make that dress and that jacket that color.

How much attention was given to Justice Ginsburg’s accessories?

Justice Ginsburg is an American icon. What does she mean to you?

What Justice Ginsburg did in her career, I take personally. The difference that she made for me in my life is extraordinary. I was lucky enough on this film to meet her and be in her chamber while I was dressing her for the final scene—and all I could think while I was with her was “Thank you.”