Caitríona Balfe and Judi Dench Wear Their Hearts in Belfast

“Clothes do make the man and women, and that’s especially true in Belfast,” wrote Below the Lines News about Kenneth Branagh’s Belfast. In this deeply personal film, Branagh reimagines his own youth growing up in Belfast during The Troubles through the character of Buddy (Jude Hill), an irresistible 9-year-old whose family’s life is altered by the growing political unrest in Northern Ireland. Buoyed by the love of his Ma (Caitríona Balfe) and Pa (Jamie Dornan) as well as his grandparents — Granny (Judi Dench) and Pop (Ciarán Hinds) — Buddy finds security in troubled times. To express this sense of love, costume designer Charlotte Walter created outfits that showed off both the rich emotions and limited resources of Buddy’s family. In acclaimed films and television series like Birdsong, Pride, and This is England ’86, Walker has shown a talent for making period pieces feel contemporary. For Belfast, for which she has been nominated for Best Costume Design by British Independent Film Awards, Walker makes the characters feel like family.

We spoke with Walker about realizing Branagh’s vision, finding the right clothes for Buddy, and remembering her grandmother with her outfits for Judi Dench.

Get tickets for Belfast now. 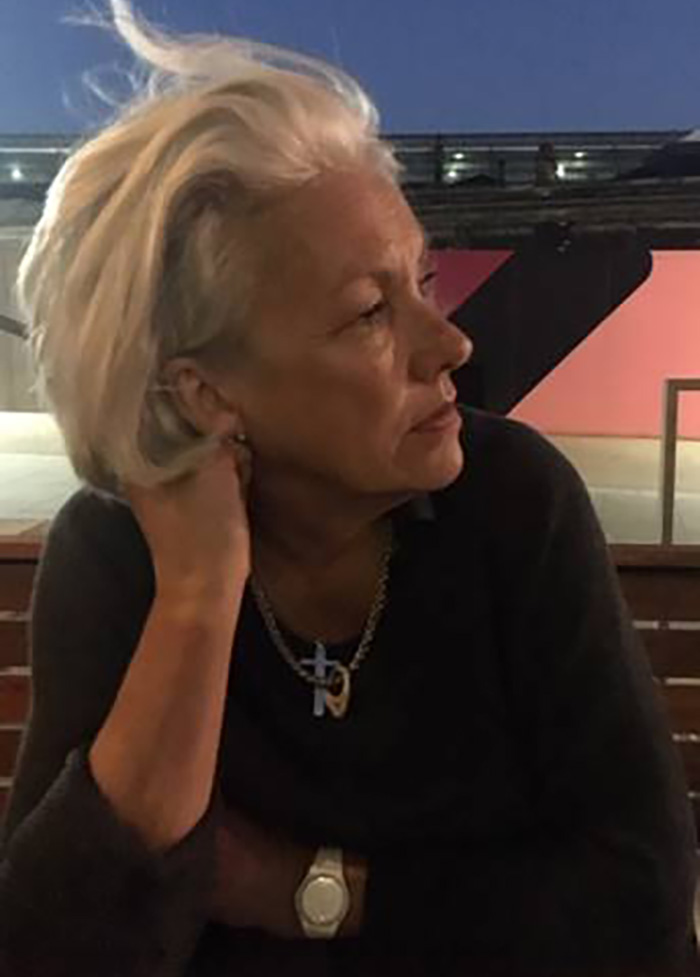 How did you get to work on Belfast?

I knew the co-producer Celia Duval, who phoned me to ask me how I felt about working on a film. It was July 2020 and we had just come out of the lockdown. When I read the script, I found it really inspiring.

What in the script was inspiring to you as a costume designer?

I was moved by the fact that these were real people in a real situation. And the story took place in the late 60s in Northern Ireland, so I was really intrigued by that. The parents were not glamorous, but they had a real sense of style. They watched films and read magazines, and they dressed as best they could in modern fashion. But their choices were bound both by what they could afford and what they could get. All of that was really intriguing for me.

Did Branagh give you any creative direction in terms of the costumes?

He just wanted them to look real. He did tell me that his parents loved clothes. Both his Ma and Granny were knitters. That was something I took on board right away. I have amazing people who do hand knitting very quickly. We knitted Buddy’s jumper and Grandma's cardigan to give a film the feel of what real people did for clothing.

How did you research the dress in Belfast?

I looked at photographs. Because of what was going on, there are a lot of photographs from that period I could find online. Belfast was remarkably well photographed in the late 60s. There are amazing photographs of everyday life, as well as soldiers in the streets. I remember some remarkable shots of kids in jumpers, shorts, and shoes with holes in them talking to uniformed soldiers. 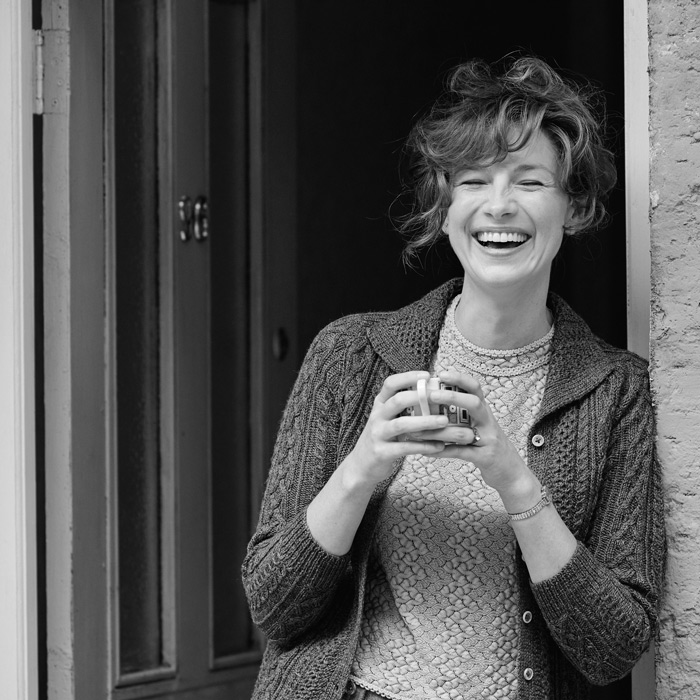 How did shooting in black and white affect your color palette?

When I started, I didn't realize it was going to be black and white but in a way that made it more interesting. To show off the clothes, we looked at the textures in knitwear to give the clothes a three-dimensional feel. For example, Granny’s pinafore dress had a great texture to it. It was important for me to dress everyone as if we saw them in color, because that showed off their character. For Granny’s pinafore dress, I had a 1960s fabric in two colorways — rust and cream or navy and cream. We chose the rust and cream because it was more her character. We tried to make sure everything had an interesting three-dimensional texture to it.

Can you describe Buddy’s wardrobe?

All the characters had small wardrobes because that is all they would have had. Buddy had two pairs of shorts. He had his green jacket that he wore to school every day. He had a best jacket that he wore to church and to the funeral. He had three shirts and two pullovers. Buddy’s look was simple and beautiful. We heightened it a bit when he went to the cinema or church. Ken showed us a fabulous photograph of him wearing a bowtie as a little boy, so we gave Buddy a bowtie when he went to church.

In dressing Caitríona Balfe, you made her both hardworking and glamorous.

She was a very attractive woman. In the movie, she wears short skirts but then everyone wore short skirts then. She had pretty shoes, but they weren’t high heels. They had to be short heels so she could still run after Buddy up the street. She did not have an enormous wardrobe, but we mixed it up creatively. I had this image of Ma in my head. And my one fitting with Caitríona was fantastic. All the clothes suited her, and Caitríona Balfe said “yes” to my suggestions. That is how we built Ma's wardrobe. 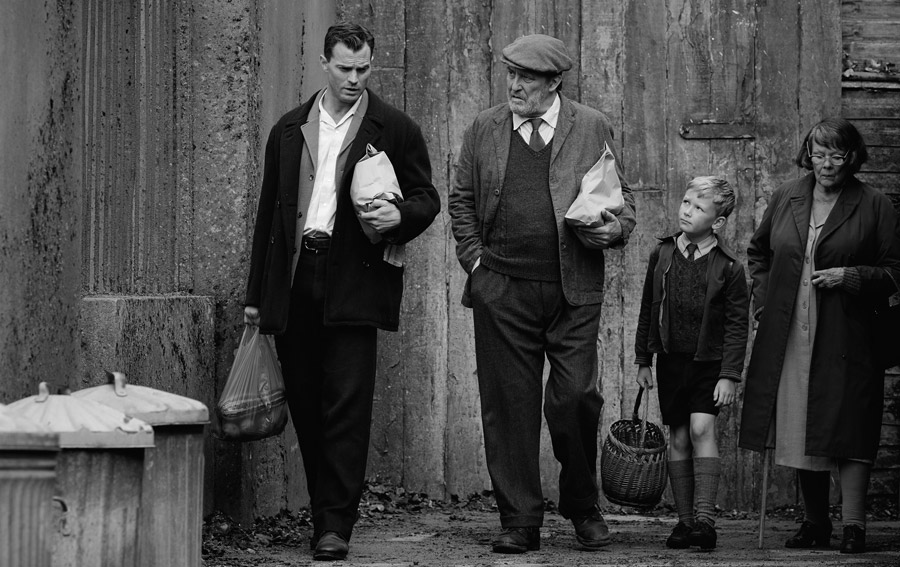 Judi Dench has such a distinctive look as Granny.

I've worked with Judi before which was a tremendous help in this situation. I could imagine how she would look as Granny. The inspiration behind her look was literally this fabric that belonged to my grandmother and a photograph of her I put on my board. My grandmother had taught me to knit, and she used to knit us cardigans and pinafore skirts all the time. At the time, there were nearly no stores open to buy fabrics, so I decided to use that fabric that I’d been carrying around with me for ages and ages looking for just the right time to use it. And this was the right time to use it. When I showed the fabric to Ken by holding it up to my iPad, he told me we were shooting in black and white, but he completely got the look for Granny.

How did you use that fabric to build her character?

For the fitting, I just had Judi hold the fabric up in front of her. We built her character around that. We decided what would be the right shoes, the stockings, the cardigan, and the pinafore dress. We gave her two aprons and a coat. And when she went out, she wore a hat and gloves — that was something even in the late ’60s women of a certain age and respectability would wear. When she goes to the cinema, she wears her hat.

What would you like audiences to take away from Belfast?

A love of family life. There is so much love in the film — the love of the family, the love that all of us had making this film. It was extraordinary. Because of the lockdown, I didn't know where we were going and what was happening, but there was such a sense of love in my department. It felt like a close family making the film. I believe that is up on the screen and I hope the audience can take that away.