On The Cutting Edge: Framing Mark Rylance in The Outfit

An Q&A with cinematographer Dick Pope

In Graham Moore’s directorial debut, The Outfit, Mark Rylance plays Leonard, an English tailor in Chicago in the 1950s who makes bespoke suits for the local mob (played by Johnny Flynn, Dylan O’Brien among others) and provides them a meeting space. One night, however, the seams on this tightly wound arrangement become undone, threatening everyone, including Leonard’s assistant (Zoey Deutch).

Moore, who won the Academy Award® for Best Adapted Screenplay for The Imitation Game, also wrote The Outfit, bringing to the story the same cunning plotting and meticulous control. To help frame the film’s suspense, opening up the puzzle scene by scene, Moore turned to veteran cinematographer Dick Pope. Having twice been nominated for Academy Award® (Mr. Turner and The Illusionist), Pope is a master of reimagining cinematic space.

We spoke with Pope about planning the shoot, keeping the story tight, and keeping audiences on their toes.

The Outfit in theaters on February 25.

The official trailer for The Outfit. 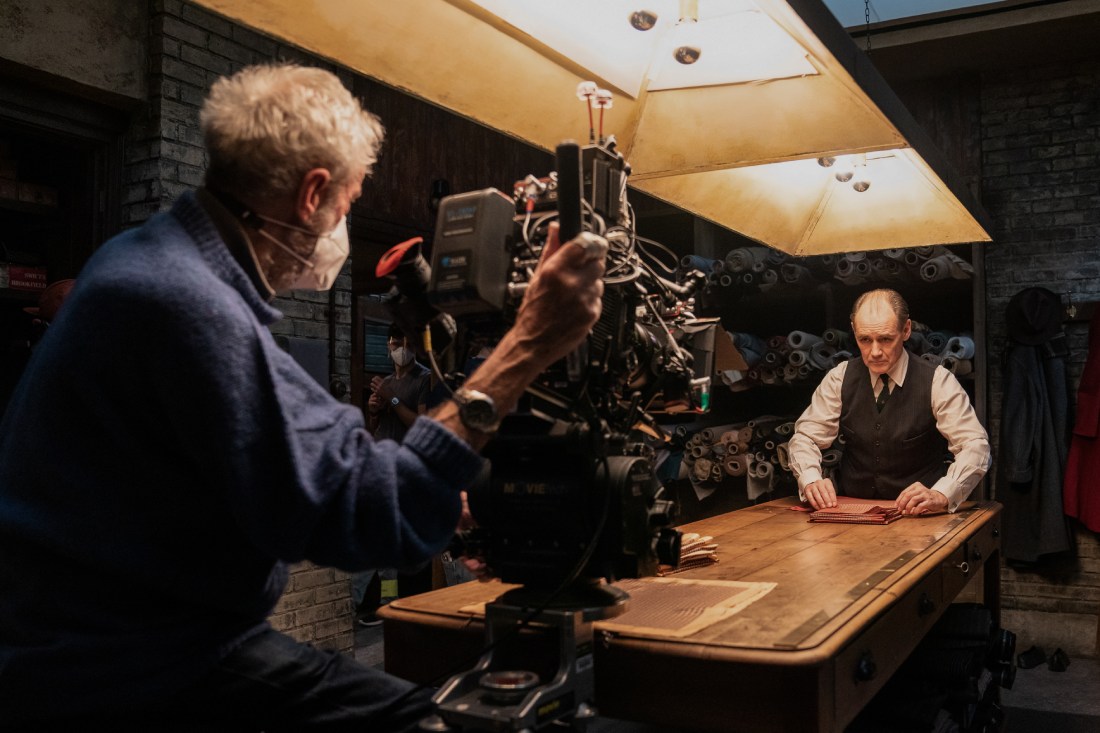 How did you get involved in shooting The Outfit?

It was nearly two years ago, when I was in cold, drizzly Lake District shooting a film called Supernova, that I got a call from Graham from Los Angeles. I had already read the script and loved it. We talked for nearly about an hour. Then the pandemic hit. It wasn’t till right before production that I met Graham, but we had been talking about the film, planning every shot for over a year. I had a long time to think about how to shoot the film.

What was the biggest creative challenge for you?

Because of Covid and actors’ availability, we only had a set number of days. I knew from the script that the set was going to be a build, so I knew I was going to have tight control over the set. Even though it’s set inside the shop, the story goes through several days, and we have to account for all the light changes, as we go from pre-dawn to morning to daytime. With my lighting team, we built a whole lighting system in the false ceiling, so I was able to create the lights to capture any time of day, as well as give the space a sinister tone when needed.

Were there particular films that you thought about in creating The Outfit?

We never got a chance to watch films together because we didn’t get together till a few weeks before we kicked off production. But we did talk about a few films like 12 Angry Men. We had a lot of dialogue about Bad Day at Black Rock, which is a wonderful ensemble film. In that film, there are a lot of scenes where many people move within one frame. They didn’t use a lot of coverage. Instead of cutting to action, they created tension between people when they were in the same frame. We thought about that idea to some extent in framing our shots.

Can you talk about the screen ratio?

I originally brought up Bad Day at Black Rock to Graham as a way to think about the screen ratio. We shot the film in a 2:1 format, which I’ve wanted to do for a while. It really wasn't a widescreen film because we were in such a confined area. We could have done a widescreen but I don't think it would have worked for the film

The space is both expensive and claustrophobic in the film. It reminded me a little bit of Sleuth.

Yes, it is similar. That was all shot in one country house. That is why I wanted to shoot in a 2:1 format. You can play with the negative space between the characters. You are able to separate them and make them very much on their own in the same space. Sort of fighting from their own corners. Sleuth is very much like that. Using the format that we did enabled us to create a sense of edginess and loneliness with the characters. 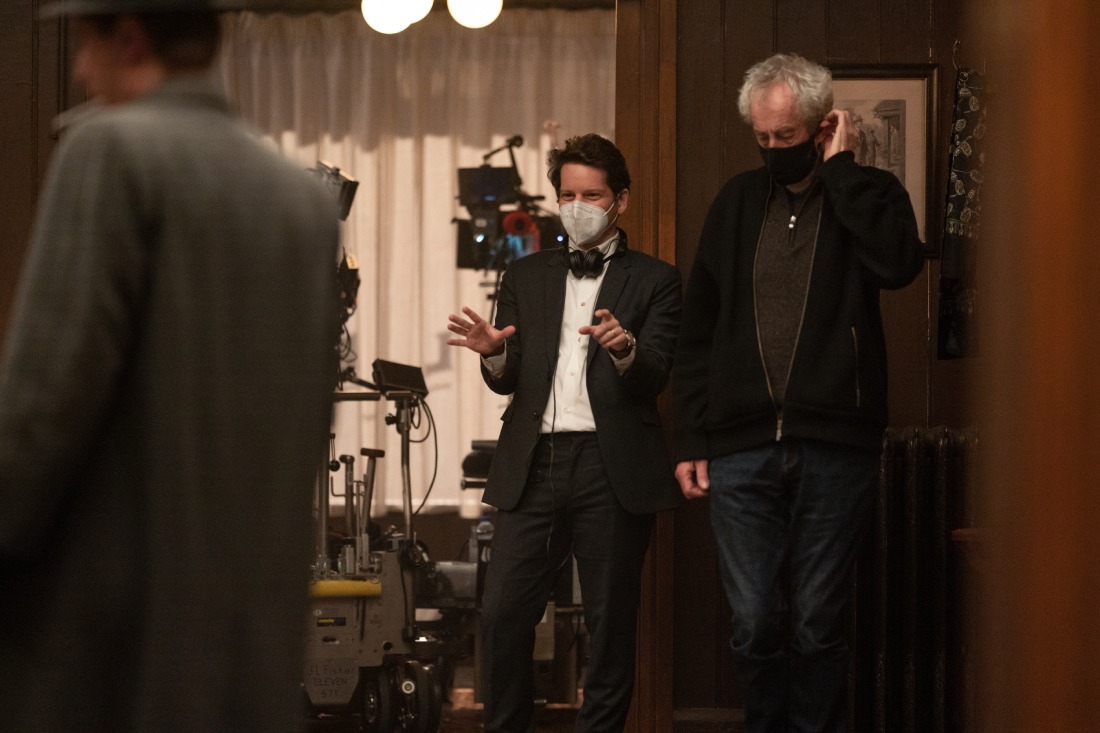 Writer/director Graham Moore and cinematographer Dick Pope on the set of The Outfit.

While the story takes place in a contained space, you shoot the film in a way that no one seems to have a clear perspective. They only see part of the picture.

Yes. There was a lot of shooting around doorways and glass so that you are never quite sure what they — or others — are doing. That was something that Graham and I worked on a lot together. We went through the screenplay and mapped out every scene to see every possible scenario. Then when we got on set, we went through to see how all these shots would actually work out. At one point, Graham, the production designer Gemma Jackson, and I choreographed all the action in the different areas of the set. We would look at a shot and say, “maybe we should have a window there.” And Gemma would create a window on the set where there wasn't one. That was one of the joys of being in the studio. We were able to make all those little decisions that added a lot to the shoot. Being able to have just a little trickle of light coming in from that window made a big difference. That way we could manipulate the light coming from the outside to intimate how cold it was or when the police were coming from afar. By the time the actors arrived, we had worked out how to shoot the whole film.

As the cinematographer, how were you able to ratchet up the suspense throughout the film?

With the lighting rig we created, we were able to adjust the mood perfectly to subtly create a noir tone at different moments. I knew from talking with Graham what emotions he wanted to evoke at certain moments. I was able to turn to the pages of my script when we were shooting and not get lost about where the lights were or what lights were on, and which ones had to be repositioned.

Did you develop a color palette for the film?

Originally, I shot tests and showed Graham what the look was going to be. Perhaps most important for me was getting the right palette to fit the costumes. Since Leonard had made the suits the men are wearing in the film, it was important to get it just right. In addition to our lights, there was an array of practical lights on set. We wanted the fabric and cut of the suits to really show so we could capture the period feel without overemphasizing it.

What do you hope audiences take away?

I hope it makes their brains tick. You have to be on your toes to keep up with the plot in this film. That’s what makes it such a satisfying experience. I think the film is great.