A Q&A with director of photography Bobby Bukowski

In her directorial debut, Land, Robin Wright creates a poignant, inspiring story of a woman who allows the wilderness to heal her heart. After an unfathomable personal event, Edee (Wright) retreats to a ramshackle, isolated cabin in the Rocky Mountains. Learning how to survive in the wilderness with help from a local hunter, Miguel (Demián Bichir), Edee starts to see herself and the world around her in a brand new light. To capture not only the film locale's natural beauty, but also the subtle way Edee’s view of her world shifts as she regains her sense of purpose, the filmmakers turned to veteran cinematographer Bobby Bukowski. For Wright, “He got it. He is a man of nature and he knows how to portray nature.” With 35 years of experience shooting creative, character-driven features, Bukowski innately knew how to capture a character’s psyche in the way he shot the film. In a film where Wright is often alone dealing with the wild, Bukowski's skill at letting the images tell the story proved invaluable.

We spoke with Bukowski about why he is passionate about this movie, his personal connection to nature, and what Land teaches us all about how to see the world anew.

See where to watch Land in theaters now or at home on demand on March 5.

How did you get involved with Land?

Robin and I had worked together previously on a film called Rampart, and I always remember the moment we connected. She was watching me light a scene in a bar. Actors don't usually hang around when I’m setting the lights, but she was really interested in what the effect of what I was doing would be. It was obvious she was on the road to obtaining as much knowledge as she could in order to direct one day. I was thrilled to be part of her debut. 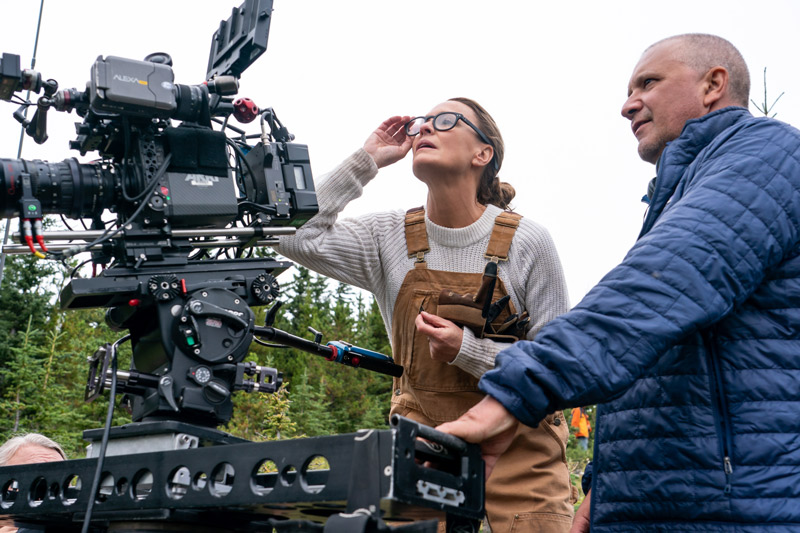 Robin Wright with cinematographer Bobby Bukowski on the set of Land.

What did you feel about the project when you read the script?

Leah [Holzer] sent me the script. I live in Portland, Oregon, and after I read it, I was ready to fly to Los Angeles to talk about the film. I am a hiker and a camper, and I know how to survive in the wilderness because I've done it before. I had such a visceral, emotional, and psychic connection to the material that I just knew that I was the right person to film it. I just had to get that across to the director. I wrote Robin a long letter which she refers to as a love letter to the script.

Much of the story is Robin in the wilderness. Telling the story just with images must have been an exciting challenge for a cinematographer.

Of course. I've sometimes thought that it was kind of a tragedy that the advent of sound recording came so early in the history of filmmaking. The image never got a real chance to tell the story all on its own. I often ask directors, "what would be the one image in a scene that gets across what we are trying to say." It’s helpful sometimes to reduce a scene down to a pivotal image.

Was there a single image that summed up the film for you?

Before I met with Robin, I sent her a lot of images. There was one picture of a woman, a very tiny person in an immense wilderness, that really spoke to me. In the beginning of the film, we shot Edee that way. We made her small and separate from nature. She was on one side, and nature was on the other side. As the film develops, and she learns how to live in the wilderness, we put the camera lower. We shot through grass and put elements of nature in the foreground. Over time, she became more visually integrated with the world around her. It was important to me to show her in that world as the seasons changed. When I was back home in Portland watching the colors change in the trees, I told the producers we had to get back to Alberta or we’d miss the peak of trees changing. I am sure I was pretty annoying, but we did get back and capture those glorious oranges and yellows. It only lasted for two days before the winds and snow came.

How did your personal connection to nature help in filming Land?

When we were shooting, it was often just Robin and me in the woods with the rest of the crew down below. We tried to keep the ground — whether it was snow or flowers — as untrodden as possible. The footprint of a film crew can be quite heavy. I told Robin that when I was alone in the woods, everything became my friend. For example, I’d put tree sap on my fingers and smell it. It made me feel connected.  I suggested that Robin do that. Those little things that aren't scripted are often the hardest things to capture. One day a ladybug landed on my arm. I handed it to Robin and said, “Here is your friend for the day.” 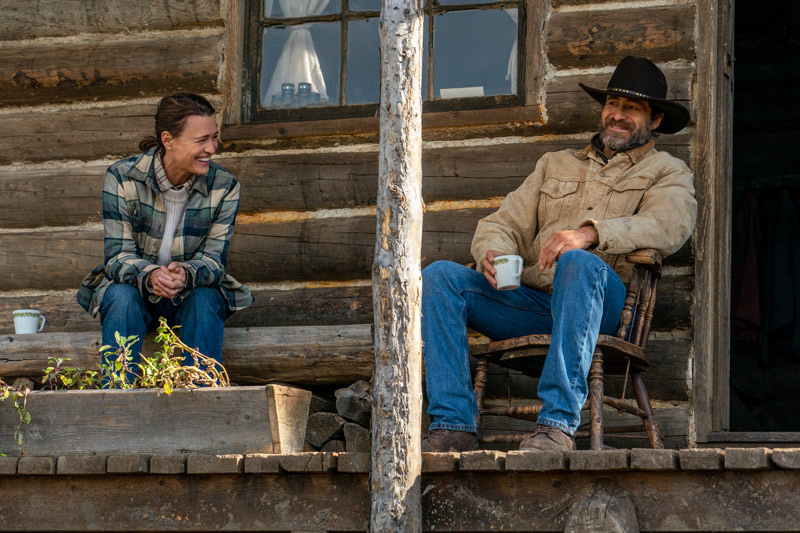 Robin Wright and Demián Bichir at Edee's cabin in Land.

During production, you slept every night inside Edee’s cabin. What did you gain by that?

It allowed me to experience Edee’s point of view. There was no heat. No water. I slept in that sleeping bag that you see in the film. The camera and the lens box were in that cabin with me every night. When I woke up in the morning, I could shoot the sun coming up. If we had an early wrap, I could go off and shoot a spectacular sunset. If there was a change in weather and the icicles started to melt, I could capture that. I could pick up images that Edee would have seen. Most of the vistas in the film were from the time I spent alone in the cabin.

Were you capturing Edee’s changing sense of the world and her place in it?

She starts off being a stranger in a strange land. She is ill-equipped to deal with the wilderness, so, at first, nature is fearful and forceful. As she becomes one with nature, the images become more tender and beautiful. We did a lot of work in color grading to suggest those changes. She comes to this place dulled by her past. She's quite myopic and can’t see her future. In the beginning, we made the shots of nature less saturated and more contrasted. As she wakes up, she starts to see the world around her and the colors become more saturated. Every leaf is in focus and sharp. That was part of the design we created.

What did you gain by deciding to shoot in the actual cabin rather than on a soundstage?

We were originally slated to build a larger building which was going to be our sound stage. But by shooting in the cabin, we had a lot more freedom. When Robin looks out the window, she is looking at an actual vista and not a blue screen. She could just open the door if she wanted to go outside. If the weather changed, we could decide right then to shoot outside. Also when the conditions changed, you would actually feel it in the film. When the winds pick up or the snow comes, shooting on location makes it feel more real. When the crew is struggling, Edee will be struggling too. For me, light is such a palpable way in which you experience the world. Shooting in natural light really helped tell the story.

Looking back at the finished film, were there any shots you feel especially proud of?

I think the very last shot of the film. We went back and forth about how to end the film. We had thought about a scene outside Miguel’s house where Robin is walking away filled with a sense of her connection to him. Early on, I showed Robin the last shot of Federico Fellini's Nights of Cabiria, where Giulietta Masina, her life shattered, walks through a parade and the look on her face turns from complete despair to hope. I thought Robin walking away from Miguel's house could be the last shot of the film in the same way. But the last shot we created is magical. The sun, which was just on the horizon, was directly between the camera lens and Robin’s head. At the last moment, I was able to slide past the face, and the sun takes over the frame and fills the screen with light. It was the perfect image for this film.

What would you like audiences to take away from this film?

I think I'd like people to take away the idea that the answer is always within, that we all have the tools inside of us to heal ourselves.