The world of Miranda July’s Kajillionaire—in select theaters on Friday—is a sublimely surreal Los Angeles landscape of industrial warehouses, fastidiously curated homes, and lost neighborhoods. It is a place, as Little White Lies exclaims, one feels “the sense of acute loneliness that haunts sunny Los Angeles.” Here the Dyne Family, a rag-tag team of grifters made up of Robert (Richard Jenkins), his wife Theresa (Debra Winger), and their child-like adult daughter Old Dolio (Evan Rachel Wood) stumble through the streets in search of their next low-level con job. To bring this alternate LA to life, July reached out to production designer Sam Lisenco, who’d recently highlighted the otherworldliness of New York City in Uncut Gems and Good Time. “I was looking for someone who could see what was subtly alluring about a bunch of unglamorous locations,” July recounts. “Sam completely got it.” Indeed, Variety singled him out, giving “Props to production designer Sam Lisenco for making these spaces seem so plausible.” In Kajillionaire, Lisenco surveys the depth of July’s universe, moving easily from the surrealism of a wall of bubbles to the hyperrealism of very personal home décor.

We spoke with Lisenco about being a New Yorker in Los Angeles, July’s unique vision, and what makes Kajillionaire ultimately such a moving emotional experience.

How did you get involved with Kajillionaire?

One day when I was in the miserable cold wrapping up this lavish picture in New York, I got a call from Miranda about coming to sunny California to make a movie. I had no idea that I was even on her radar. It was like the sky had opened up. I've been a huge fan of hers for a very long time. When I was younger and falling in love with film, she was somebody that I only dreamed of working with.

What was your initial sense of what the design should be?

I was fully cognizant about what is special about July's work, as well as what audiences think of it. First, I wanted to be respectful of the visual language that she worked really hard to develop over the years. Before I sat down with her, I wanted to soft sell this idea of reining in a realistic vision of her world. As a New York realist production designer, this was a great opportunity to tap into deep concepts of fantasy. 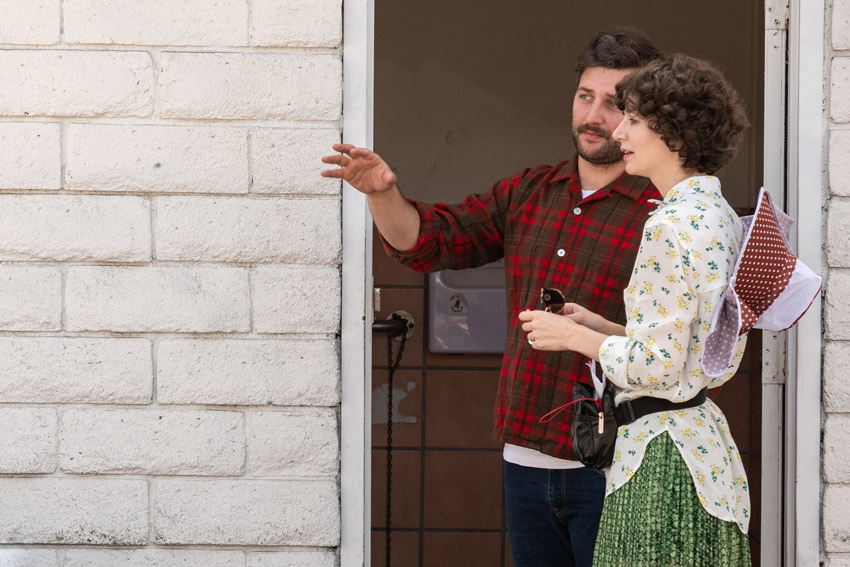 Sam Lisenco and Miranda July on the set of Kajillionaire.

You show a rarely seen side of Los Angeles. How did you arrive at that choice?

Miranda's relation to that LA is a passionate love for the vernacular of the city. Being a New Yorker, I’ve always seen Los Angeles as a sort of Joan Didion-esque city of collapsed American freedom where everyone just hits the Pacific and slowly bakes in the sun. So I was really enticed with this idea of a vernacular Los Angeles being inherently beautiful and being depicted in this almost painterly way. We were interested in depicting the fringes of practical Los Angeles, areas like North Hollywood, City of Industry, or the area below the Fashion District that is not even incorporated into the City of Los Angeles.

The bubble company next to Dyne’s home is particularly striking.

The location manager Dave Conway and I drove every block in industrial Los Angeles to find the perfect building. We were just about to throw in the towel and get a beer when we saw this building. It was a jaw dropper. That green color that permeates everything was natural to the location. The place was a metal smelting location. From now on, if I ever smell smelted metal, I will forever think of that building. 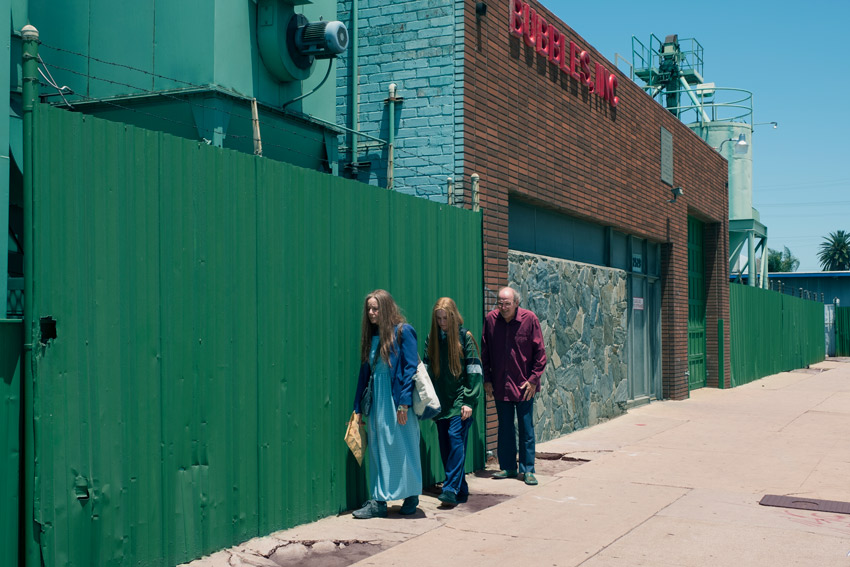 The Dynes live in a warehouse office with a wall of bubbles. Where did that come from?

The wall of bubbles was scripted from the very beginning. For us, it was a sort of a nail-biting, how-the-hell-are-we-going-to-do-this challenge. What we knew is that it was going to be this fanciful element that would visually punctuate the very stark and realistic family conversations taking place in the office. I always thought of it as a sort of mid-level Tim Burton thing that was born out of the language of reality.

What does it tell us about the Dynes that they live in an office space with a wall of bubbles?

There is a general protectionist element that all family members have towards each other. The physical location of that office space next to a factory winds up being something that feels particularly safe. I think that it is the closest thing architecturally to a notion of bedrock, of womblike safety. When you are in this windowless space, it feels homey in a way that such an interior never should. 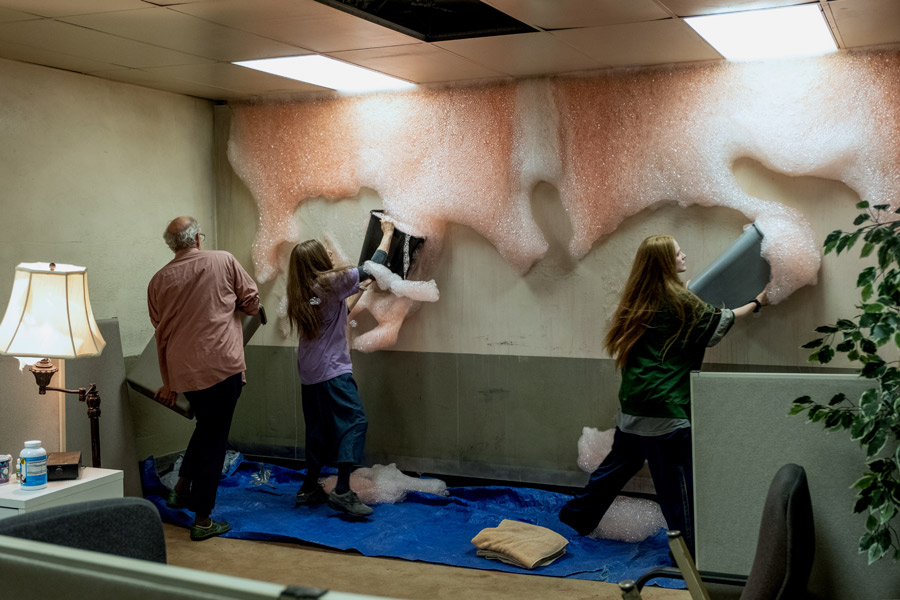 The wall of bubbles in Kajillionaire.

How did you design the homes of Abe and Sue, two people they con?

For those homes, we started from a place of hyperrealism. We asked "what are these places actually like and what is the most cinematic version of them?" Then we tried to thread the needle somewhere in the middle. As the Dyne family traverses Los Angeles as a band of hucksters, we wanted to juxtapose various interiors against each enough to give this picture postcard of the city as a whole. For Abe, it was more about taking advantage of the space we were in, but for Sue it was more about building that character out. We wanted to take the living layers of her personality and inject them into the space.

What was the palette for the film?

There was less of a palette and more tonal shifts in the film. Much of the work was making sure that things didn’t work against each other. In the Bubbles’ office, because we were dealing with a moderately neutral green palette, it was important to emphasize both the bubble wall and all the crap they have accumulated over the years and to get those things to pop.

Miranda July is considered such a visionary filmmaker. What was it like working with her?

As a person who was being subjected to her brain on a daily basis, working with her gave me an appreciation for my ability to have a visceral reaction to aesthetics, and to embrace that reaction and use it as a guiding influence.

There is an incredible depth of meaning and art in this movie that is unique in the way that great comics are unique—the way they make you think, “Yeah, that is so true.” The way that characters interact with each other in this movie might seem alien at first, but when the film’s language settles in, you understand how profoundly human these characters are.