A Q&A with composer Emile Mosseri

Under the surreal surfaces and slapstick antics of Miranda July’s Kajillionaire—in select theaters on Friday—beats a heart of real emotion. When Old Dolio (Evan Rachel Wood), the adult child of a pair of small-town scamsters—Robert (Richard Jenkins) and his wife Theresa Dyne (Debra Winger)—meets Melanie (Gina Rodriguez), her life changes. Melanie is the first person to see her for who she is. To chart the film’s emotional course, from crime caper to romantic comedy, from satire to sincerity, the filmmakers turned to composer Emile Mosseri. Having created the award-winning music for The Last Black Man in San Francisco, Mosseri seemed the perfect candidate to orchestrate July’s strange new world. July and Mosseri discovered how in tune they were right away. “The first thing he played was the love theme for Old Dolio and Melanie,” recounts July. “It was the most beautiful thing I’d ever heard. I couldn’t believe I was so lucky.”  The final score, which The Playlist singled out as “delightful,” sparks with the full range of emotions, from artful silliness to profound sorrow, that collide in July’s film.

We spoke with Mosseri about his creative collaboration with July, working with his band The Dig while composing a film score, and uncovering the endearing love story at the film’s heart.

How did you start working on Kajillionaire?

I met Miranda right after Sundance in Los Angeles, right before I was about to head to Northern California to make a record with my band. It was a strangely productive time. I would work with my band and then I sneak off to write music for Miranda. I had seen the film, but I wasn’t scoring specific scenes then—just writing music in the spirit of the film. We had such a short time to pull the score together that I wanted to be sure to have something in my back pocket when I met up with Miranda again. 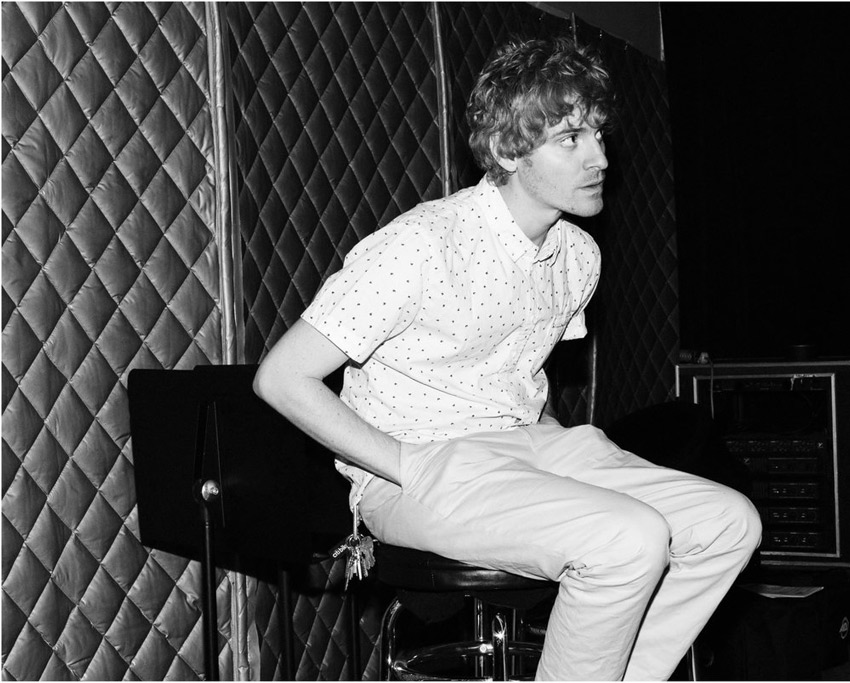 What were the first things you wrote in the spirit of the film?

I was trying to write music that was unapologetically romantic but felt a little more classic. The story is a love story, so the music had to honor that. Finding that music is always an exciting and fun process. You don't know what it’s going to be in the beginning. You have to sort of catch it as it reveals itself in the process.

Was there music already in the movie when you started?

There were two pieces of music that were going to stay in the film. There was Bobby Vinton’s “Mr. Lonely.” It was being used both as source music and score. In the film, Old Dolio listens to the song, but you also sometimes hear the instrumental version. Then it all comes together when the song plays at the end of the film. There's also an original piece composed by Summer Mastous that Melanie plays on the piano for Old Dolio.  When I started, I knew that everything I wrote would have to live alongside those two pieces of music.

How did you and Miranda July develop the score?

I’ve been a fan of Miranda's work for a long time so I had an idea conceptually where we might overlap. During the time I was working with my band, Miranda and I calibrated our tastes by sending each other pieces of music. She’d send me music by artists like Eola. I’d send her a piece by Ennio Morricone or some classical music or a song from another band. It was all over the place, but each piece felt like it might be spiritually connected to the film. I also sent her music from my past projects to see if any of them resonated with her. In the beginning, you have to empty your pockets and put everything on the table to find what the best score might be. 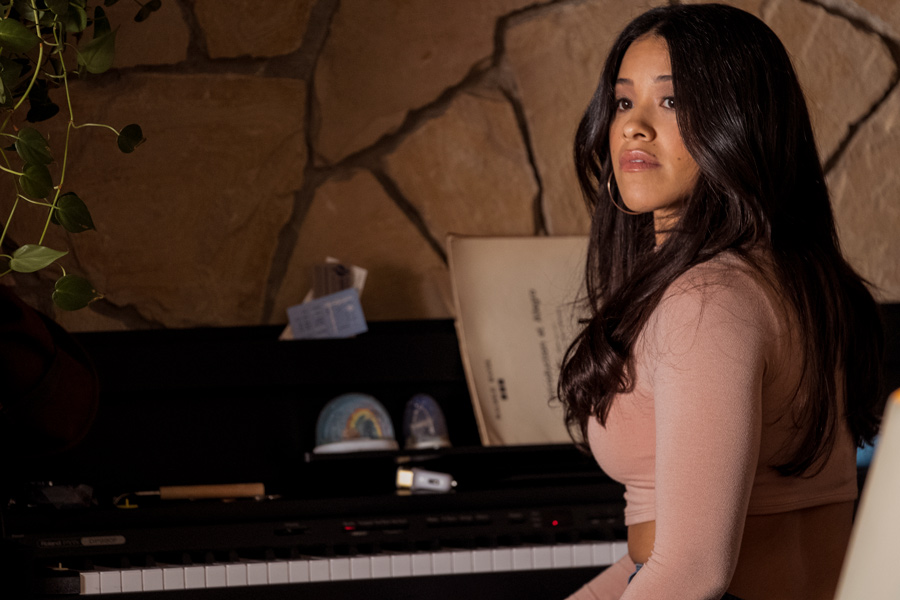 Melanie (Gina Rodriguez) prepares to play the piano in Kajillionaire.

Were there particular themes that you imagined?

There are different themes that sort of fold into each other. There's a love theme that is reimagined in different ways throughout the film. And there's a heist theme because it is ultimately a heist film, which would show up every time the family was getting ready for another con. That melody is reimagined in a more romantic way later in the film, so that the heist theme feels cut from the same fabric as the romantic music.

Did you create specific instrumentation for the different characters?

Not so much for the characters, but we worked on what the right sound for this world should be. In the film, you get dropped into Miranda’s world right off the bat, a place that is strange but at the same time very familiar. The challenge musically was to figure out what this world should sound like—what are its textures? What does its orchestration feel like? We found this melodic mixture of woodwinds and strings, but we also used vocoders and synthesizers as well as percussion and bass to round out the sound. 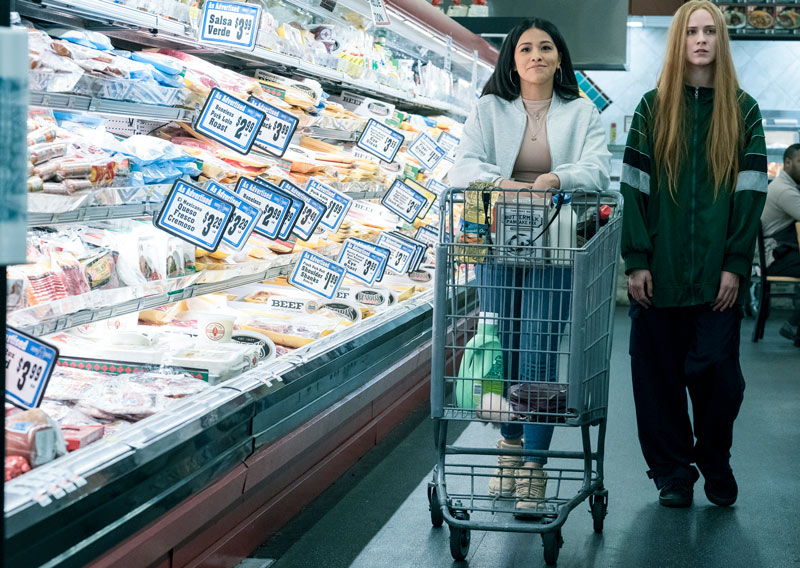 The film presents a unique version of Los Angeles. Did that influence your score?

Not in any calculated way. In The Last Black Man in San Francisco, there was a designed juxtaposition between the score’s old-world classical sound and the backdrop of 2018 modern San Francisco. It is an interesting question about LA because I didn't consciously try to reference Los Angeles or Los Angeles music. But there are things in the score that are working in that way. There is a very old Hollywood sound that is not at the core of the score, but shows up throughout the movie, especially in the more romantic parts.

In addition to scoring film music, you play in the band The Dig. How does your band affect your film scores creatively?

Often people who come from the band world approach scoring a film with some novelty, which I think works to my advantage. If you come from a world of playing in bands, or listening to bands, and not just film music, that shows up in your work. If a composer writing an orchestral score comes from working in a band, his use of classical instruments is going to be influenced by having played rock-and-roll or jazz in a band.

Miranda is such a visionary filmmaker. What was she like to work with?

It was a dream. We had to live and breathe music every day for weeks. Because of the time limitations, we were often figuring things out in real time. I didn’t have the luxury of going off to write something, bouncing it against picture, and then emailing it to get notes back. It was more like being in the same room and asking her, “what about this?” It sounds like it could be scary—and  maybe in the beginning it was—but because we were so in tune musically, it turned into a magical experience.