In The Outfit,  Graham Moore knits together a taut thriller about a Saville Row tailor, Leonard (Mark Rylance), who has set up shop in Chicago in the 1950s and finds his best customers are members of a criminal syndicate called The Outfit. When the gang suspects that there’s rat in their midst, Leonard’s shop is turned into stage of betrayals, reversals, and surprises. Zoey Deutch, Dylan O’Brien, and Johnny Flynn co-star in thriller that Deadline calls a “a literate and thrilling gangster picture that brings a fresh touch to a well-worn genre.”

Moore, who makes his directorial debut with The Outfit, is not new at creating compelling suspense. In 2015, he won an Academy Award® for Best Adapted Screenplay for The Imitation Game. As a novelist, he has written three highly acclaimed mystery novels. In stepping up to direct, however, Moore knew how to let his crew and cast do what they do best. As Variety remarks, Moore’s thriller “is stylish, but it's the way he lets the performances shine that impresses most.”

We talked to Moore about developing the film’s surprising premise, working with Mark Rylance, and loving watching the movie in an audience of strangers.

The official trailer for The Outfit 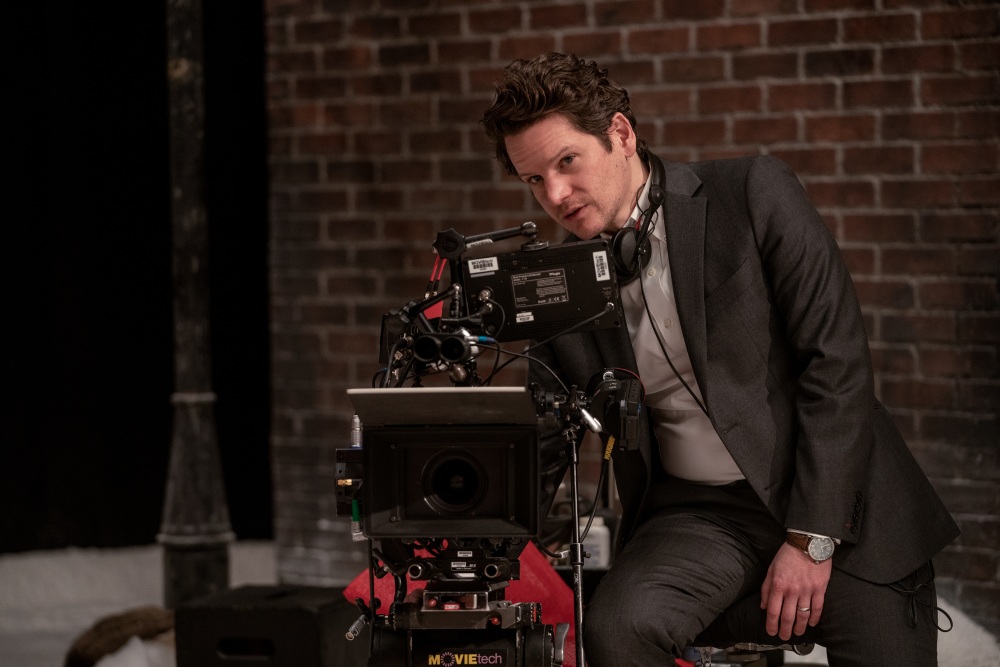 Writer/director Graham Moore on the set of The Outfit

Where did the idea for The Outfit come from?

Emotionally the idea for The Outfit came from my grandfather. When I was about seven years old, my parents split up and my grandfather (on my mom’s side) became this really formative father figure. My first memories of going to the movies were with my grandfather. He was the person who first taught me how to tie a tie. He was the gentlest, kindest soul I have ever met. He was a doctor with a small-town family medical practice and one of his patients was a notorious mobster, Jerry Catena. This was always a subject of family fascination and horror. How could someone as gentle as my grandfather be treating this vicious killer. “What do they talk about behind closed doors,” I often wondered.

How did you end up focusing on a tailor in Chicago?

A tailor was not the first idea. But then a few years ago my dear friend and co-writer John McClain asked me over dinner, “How come no one has ever made a movie before about a Savile Row tailor?” Fascinated by the psychology of it, we started diving into the subject. A Savile Row tailor, like our main character Leonard (played by Mark Rylance), would have spent decades of their life perfecting an extremely difficult and esoteric craft. The problem we had is that we could think of the right story for our character. Then one day, digging through a book on the history of 20th-century tailoring, we read this one sentence that described how the first bug that the FBI ever planted was placed in a Chicago tailor shop in 1956. And instantly we said, “That's the movie.” We can tell a story about a man like my grandfather, this kind of gentle craftsperson, who is a tailor making suits for the mob.

As far as I can tell every filmmaker thinks of Mark Rylance for every character in every film. If they don't, they should.

While the plot is completely original, the film has echoes of classic suspense films. What movies and books inspired you?

We felt like we wanted to do justice to this great tradition of 40s and 50 film noir and mid-century Hitchcockian thrillers, films that I loved growing up. We probably talked about Hitchcock every single day, from Rope to Lifeboat and even Rear Window, which is not quite as contained as the other two but feels similar. Hitchcock was great about finding exciting visual ways to communicate character and to tell these personal emotional stories inside these tightly wound thrillers. Deathtrap was also something I just love. It's a single location and everyone's lying to each other and playing games with each other. We have some pretty direct homages to these noir thrillers. If you're looking for advice about where to hide a corpse, for example, we felt like you could do a lot worse than looking to Rope.

In the film, Leonard makes a sharp distinction between a tailor and cutter, who is someone who must see the whole design before taking scissors to fabric. As a writer and filmmaker, did you relate to the idea of cutter?

Mark's character has this voice over in the film in which he explains to the audience how to build a suit. In many ways, it also describes the filmmaking process. Sometimes while making this film—whether writing or shooting or editing—I would have a question about what to do next. It seems almost embarrassing to admit it but I let Leonard’s voice over tell me what to do next. He knows how to make something great. You have your plans. You've done your research. You sometimes make mistakes or things don't go the way you want them to. There are things that can't be planned for and then you have to respond to them. In my now admittedly brief experience of it, that’s so much of what filmmaking is. I am a meticulous planner, an obsessive preparer, and yet I always want to leave myself open to what happens in the moment.

Mark Rylance is so perfect as Leonard. Did you have in mind when you were writing the screenplay?

As far as I can tell every filmmaker thinks of Mark Rylance for every character in every film. If they don't, they should. When Jonathan and I were writing The Outfit, we could not have dreamed we would ever get an actor of Mark Rylance's caliber. In part because I don't think there are other actors of Mark Rylance's caliber. It was very gratifying that when we sent him the screenplay, he responded right away. He understood immediately what we were doing and why it would be interesting for him to do. Mark and Leonard reminded me of each other a bit. Both are these expert craftspeople.

How much did you borrow from your experience as a novelist in making this film?

Having a background as a novelist informs a lot of what I do. Because I've written novels and written screenplays and now have directed a film, going back and forth between different media actually helps inform me about what works well in one medium and what works well in another. In The Outfit, it was really important for me to create a cinematic experience. It's not a novel. It's not a play. It's a film. To be honest, I was excited to jettison some of the storytelling devices I use in a novel and do things you can only do in film.

How much did you learn about being a filmmaker working on The Imitation Game?

I was so fortunate when we made The Imitation Game. My friend Morten Tyldum, who directed that film, was so open with me about the filmmaking process. He allowed me to be with him in rehearsals. I was on set every day. I was in editing and sound and the whole post-production process. Morton took me under his wing and let me work with him and everyone else to make the film. One of the most gratifying aspects in making The Outfit was the number of people from The Imitation Game who were willing to come along and work with me as a director—from the editor Billy Goldenberg to our illustrious composerAlexandre Desplat to some amazing craftspeople.

Nikki Amuka-Bird as Violet in The Outfit

As a filmmaker, you use cinematic space in a really innovative way to shoot Leonard’s shop. You create all these unknown spaces and surprising angles in a room that initially look rather obvious.

I give a lot of credit to our terrific production designer Gemma Jackson who worked in harmony with our cinematographer Dick Pope, Mark Rylance, and me. We crafted the space from the floor to the ceiling. We shot on a soundstage purposely so that we could completely control and design every single element of space in the shop. We even experimented with Mark and the other actors during rehearsals and let those experiments affect the shop we were building. We designed the shop to coordinate with the design of camera movements. The idea was that the shop, just like every character in the film, seems straightforward at first. It seems like you know exactly what's going on. Then you realize that they're all these little nooks and crevices and extra layers that you hadn’t noticed before. Gemma and I made a rule that nothing in the shop is parallel, nothing evenly lines up. You'll notice that none of the doors quite line up with the door on the opposite side. Everything is just a little bit off in some way. The rooms are never quite square, nor are they quite rectangle. This geometry created this extra tension. We allowed part of the frame to fall into shadow and fall into darkness and create what felt like a great sense of mystery.

How did you work with Alexandre Desplat to create the score, which evokes the period so gracefully?

With the music, we wanted to reference mid-century Noir filmmaking but we never wanted to fall into pastiche. Something Alexandre and I talked about when we did The Imitation Game was using period appropriate instruments but using them in ways that were not how they would have been used in the period. In The Outfit, we use period instrumentation but they are never being played quite the way one would expect in 1956. Early in the process I asked Alexandre if there was anything that he would really like to do. As a first-time director, my job is not telling people what to do but laying the groundwork so that they can do their very best work.

What did Desplat want to do that he’d never done before?

He wanted me to send him the movie with no temp music at all attached to it. Normally composers always get a version with temp music to get an idea what the director and editor are thinking musically. “Just send me a completely dry cut of the film and then just let me run wild,” he requested. Alexandre told me that once you get the right music for the six-minute opening sequence, the rest of the score will fall into place. He sent us six different approaches to that opening, from pure jazz to atonal new classical modernism of the 1950s to very Bernard Herrmann-esque cuts. Lots of wildly different tones and styles. We ended up using one which was sort of jazz but not quite and sort of 50s thriller but not quite. It was an exciting combination I've never quite heard before.

First and foremost, I hope they're on the edge of their seats. I say the word “seat” very purposefully because we are thrilled to be part of the process of bringing people back to theaters. There is nothing like sitting next to strangers experiencing something new or hearing the laughter of someone they don't know, or feeling the same shock of terror of people they have never met.