Making Her Life Sing: The Story Behind The High Note

A Q&A with screenwriter Flora Greeson

In many ways, the The High Note,—which is now available at home on demand—a story of an ambitious young artist breaking into the entertainment industry was the reality experienced by its screenwriter Flora Greeson. Following the adage, "write what you know," Greeson wove together the fascinating and funny anecdotes from her life as a personal assistant to create a fully realized screenplay of life inside today’s music world. As much as Maggie (Dakota Johnson) loves working as the assistant to her music idol Grace Davis (Tracee Ellis Ross), she dreams of becoming a music producer. At the top of her game professionally, Grace questions the price she pays, both emotionally and artistically, in playing it safe as a performer. Both heartfelt and hilarious, Greeson’s tale of women willing to follow their dreams no matter the cost immediately captured the film world's imagination.  “When I first read the script, my heart fluttered, and I laughed,” Johnson remembers. “I really wanted to see a movie with that woman at the center of it.” For director Nisha Ganatra, "It was a beautiful story that I hadn’t seen told. It’s really funny and very uplifting.” Hear what Greeson learned about "Overcoming the Fear of Failure" in a new episode of 60 Second Film School.

We talked with Greeson about her own personal experiences as an assistant, how music shaped the story, and what it felt like seeing Dakota Johnson and Tracee Ellis Ross bring her characters to life.

How much of the story comes from your actual experiences?

I was an assistant at Universal Music in New York City for a long time and then I was an assistant at a talent agency in LA. I started thinking about this story when I was at Universal Music. I was fascinated by those big stars who have very complicated personal lives, which are often run by their assistants. In LA, I got to experience first-hand a lot of insane stories. For example, the piñata scene in the film actually happened to me. I had to fit more than 14 piñatas in my 2009 Prius. The relationship between boss and assistant often seems to have no boundaries. You spend more time with your boss than with your own family. You know everything about them from their security codes to their dietary restrictions. It’s very loose and joking until you cross some invisible line. Then you remember, “oh yeah, I’m just their assistant.” 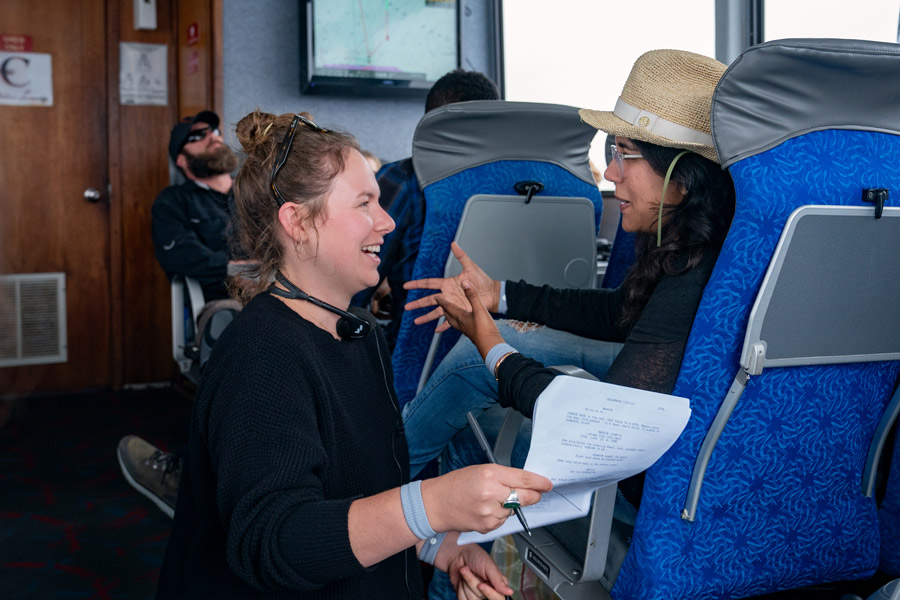 Screenwriter Flora Greeson with Nisha Ganatra on the set of The High Note.

What films or stories inspired you?

Pretty much anything that Nora Ephron had a hand in. In terms of music, I loved Almost Famous and High Fidelity. As a female music fan watching those movies, however, I never saw myself. I'm not a groupie or fan girl. I am that obsessive into-all-the-details music fan. As for the stories about assistants, the obvious comparison is The Devil Wears Prada.  I sometimes think of The High Note as a version of The Devil Wears Prada in which Anne Hathaway stays in the car at the end and the story picks up five years later. Unlike in Devil, Maggie wants to work for Grace because she admires her.

Were the characters of Grace and Maggie based on real people?

Yes and no. Maggie is based on myself and a lot of my ambitious, funny friends who are great at their jobs but wonder if that is what they should do for the rest of their lives. I loved being an assistant, but I also wanted to write, even though it was scary to do that. Personally, I don't know anyone like Grace. Although now I know Tracee Ellis Ross so I guess in a way I do. Grace was sort of an amalgamation of a lot of female artists I’ve loved from a very young age, women like Aretha Franklin, Joni Mitchell, and Carole King—all of those multi-hyphenated women who are too complicated and multi-dimensional to be put into simple boxes.

In the film, Grace is not only Maggie’s boss, but the woman who inspires her. Was there a Grace in your life?

I don't know if I can name just one person. There are so many women—and men—in my life who encouraged me to write and go after my dreams. It is hard to call out anyone in particular because I'm overwhelmed by how many there were—and still are.

The movie is so much about music. How important is music to you? What did you listen to while writing the screenplay?

That is my favorite kind of question. Music is so important to me. My parents have great musical taste which they passed down to me. As a writer, I learned so much from song lyrics, how people are able to compress huge feelings into the smallest amount of words possible. As for the music I listened to, so many of the music cues I wrote into the film came from what I was listening to at the time. I made playlist after playlist just to get into the zone. I would sit at my desk, start the playlist, listening to the same 40 or 50 songs through the whole process of writing the screenplay. I really leaned on that music to set the tone and vibe of the film. 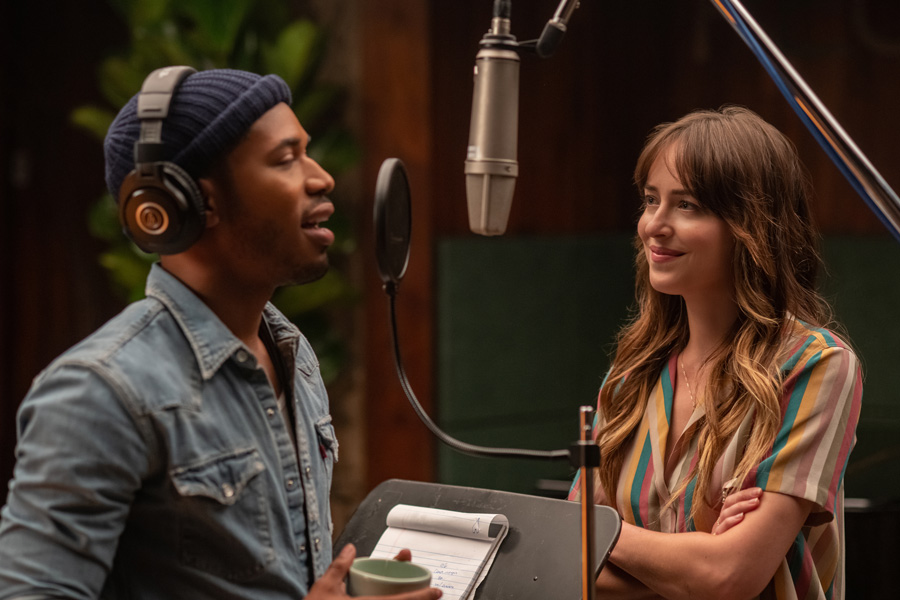 Kelvin Harrison, Jr. and Dakota Johnson in The High Note.

Writers often talk about how actors teach them about their characters. What did Dakota and Tracee teach you about Maggie and Grace?

First of all, what a dream cast. They are such talented actresses and such hard-working women. On the page, Maggie has a tough exterior. With her defenses up, she can be a bit of a hard shell to crack. But because Dakota is so funny, like a screwball comedy star, she played Maggie in such a vulnerable and sensitive way that you just see all her emotions on her face. I couldn't have written that. As for Tracee, she is just so talented in so many ways. In addition to being a killer singer, her comic timing is remarkable. She can change on a dime from being the funniest person alive to becoming so intense, furious, and scary. It was so fun getting their voices in my head for rewrites, because it was very clear that there was nothing they could not do.

The film is led by a very talented, female creative team. What difference did that make?

This is my first film, so I don’t have a lot to compare it to. That said, it felt really natural to have this level of support from our producer to our director to our production designer to our costume designer to our composer. These women all supported each other, and were in turn supported by the male crew. What stood out the most to me about having a female-led crew was how it thematically reflected what the movie was about. After all, this is a story about women who are unafraid to be very good and very ambitious at what they do. Just like our crew.

When you saw the final film, what surprised you?

I hope that it's an hour and 40 minutes during which you don't have to think about the insanity of our world right now. You get to enjoy it and it makes you feel safe. My favorite movies are like comfort blankets. It would be so great if this movie could do that for someone else.