A Q&A with Marcelo Zarvos

In Todd Haynes’ Dark Waters, Rob Bilott (Mark Ruffalo), a corporate defense attorney who just made partner at one of Cincinnati’s most prestigious firms, takes on a case that ultimately pits him against the chemical behemoth DuPont. Unfolding like a taut thriller, the film follows Bilott’s twisting path to uncover an industrial-size conspiracy endangering the lives of hundreds, if not thousands, of West Virginians. Based Nathaniel Rich’s The New York Times Magazine article, “The Lawyer Who Became DuPont’s Worst Nightmare,” the film captures both Bilott’s gripping investigation to bring the guilty to justice and the untenable costs his quest brings to those who love him, including his wife Sarah (Anne Hathaway). To create a score that hit the beats of a whistle-blower thriller as well as plumbed the emotional depths of the real story, Haynes turned to composer Marcelo Zarvos. For nearly two decades, Zarvos has shown a real talent for finding the perfect sound for a particular story, from the lush melodies of The Door in the Floor to the acoustic, South American strains of Sin Nombre to the brooding noir cues of Hollywoodland. For Dark Waters, Zarvos musically charts Bilott’s complex emotional journey as he moves from shock to fear to heartache and finally to hope.

With Dark Waters in theaters on November 22, we sat down with Zarvos to talk about how he collaborated with Haynes, his unparalleled nine-minute piano solo in the score, and why the story behind this film is so important to tell.

How did you get involved in scoring Dark Waters?

I've known Todd Haynes for a long time and have always loved his films. We met socially in Los Angeles while he was cutting the film. He was very familiar with my music, since he had often used pieces, especially some of the electronic music, as temp scores in his previous films. For Dark Waters, he was looking for this low-boil tension, something that straddled that line between emotion and suspense. It is a thriller, but it's a Todd Haynes thriller so we wanted to go right to the edge of genre in an artistic way. That is how the conversation started. From there, it was a very fast-moving train. When I saw a cut of the film before I started working, I fell in love with it. The theme of environmental justice is very close to my heart.

What did you see as the main creative challenge in crafting the score?

The film as a whole is very epic story. The challenge was finding the balance between what's on the surface and what's just beneath it. My previous experience working on films like The Door in the Floor and Sin Nombre were instrumental in showing me how to bring out what is not apparent on the screen and ground that in real emotions. No matter how exciting and dangerous the story is, there is also an emotional element to bring out. In this film, there are three emotional shifts that transform the score, from the first act, which is very much a thriller; to the second act, which is much more about the rhythms of the legal challenge; to the third part, which focuses on the human cost, not only on him but also on the population of the West Virginian town. The challenge was how to go from one beat to the next while still making it feel like the same score.

What sort of direction did Haynes gave you about the score?

Todd's approach to music in film is so complex and sophisticated. Having already made several music-centric films [like Velvet Goldmine and I’m Not There], he has a clear sense of what he wants. In the middle of the film, there is a nine-minute solo piano piece, which Todd was very keen on doing. In the film, Rob finally makes a key connection between what DuPont did and how it is affecting people. I am a pianist and a composer, but laying down such a long, solo instrumental part was something new. And I wasn’t really clear how it would work. So Todd directed me like I was an actor. It reminded me of doing the score for The Door in the Floor. In a scene with Jeff Bridges running away from a scorned lover (played by Mimi Rogers), the director Kip Williams wanted a big heroic cue, like it was a scene from Braveheart. I remember thinking I don't really understand this but I will give him what he wants. When it finally came together, I totally understood what he was after.

How does the long piano solo work in Dark Waters?

The music captures the way that all the ideas about the case come together for Rob. The cue comes right after “Helicopters at Wilbur’s,” which is probably the loudest scene in the film. You go from the loudest moment to perhaps the quietest, just a single piano playing. And the tone is very improvisational and rhapsodic. In most films, you would bring in the orchestra for a scene like this and make it all very grand. But Todd wanted the sound to be very singular, about one man's search for the truth. The piano is used throughout the score as a principal instrument. Even when it is not by itself, it helps suggests the concept of a singularity, the idea of one person and one mind trying to piece things together. 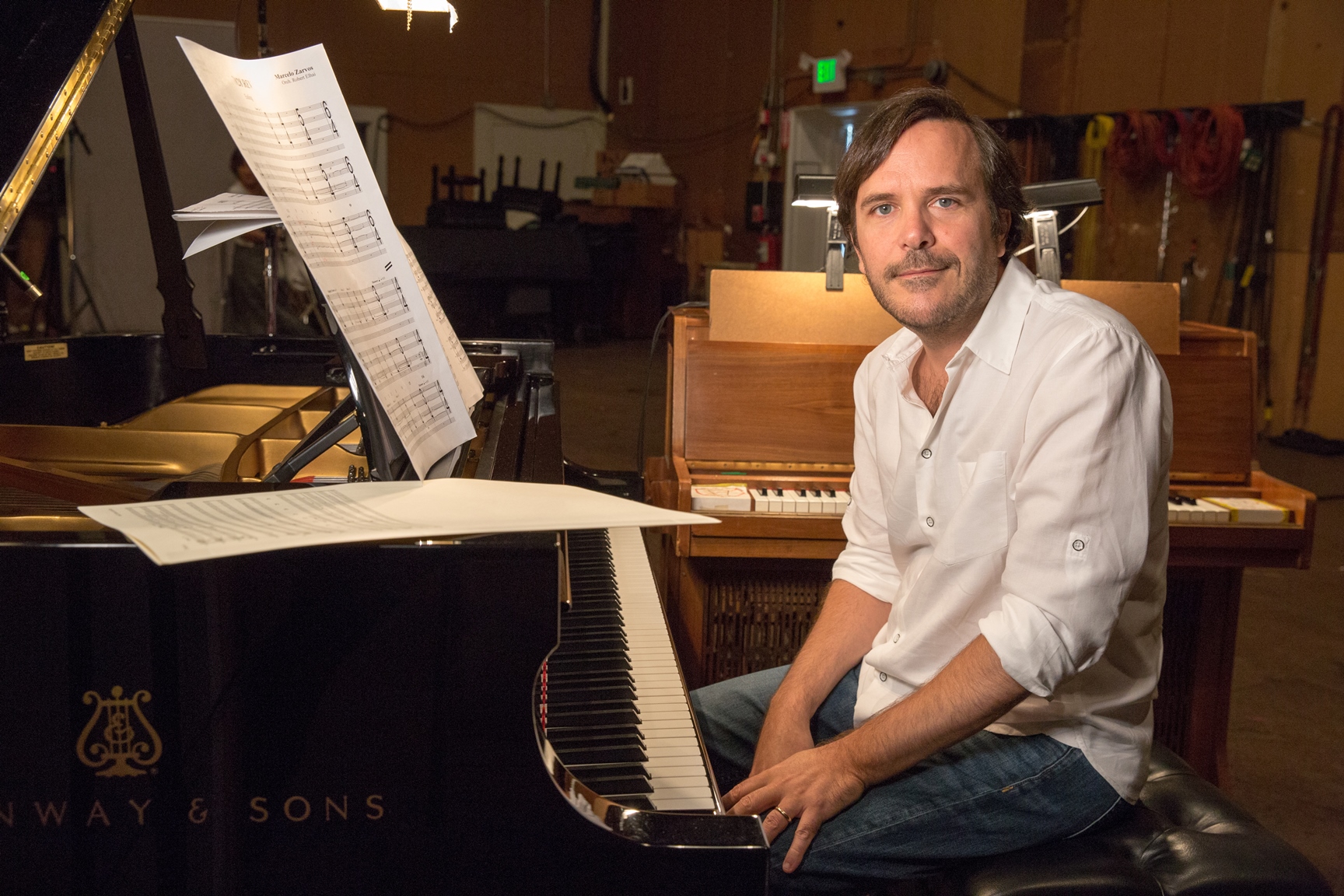 Composer Marcelo Zarvos in the studio.

In the first part of the film, the score creates this eerie sense of foreboding and paranoia, especially in the scene where Rob tries to start his car in an empty parking lot.

That particular scene in the parking lot is perhaps the best example of how we were able to push the feeling that you don’t know if what you are seeing is real or not. But rather than accenting the danger in the scene, I focused the music on what was going through Rob’s mind. His paranoia is tied to his emotions and his sense of being a family man. As the music grows, rather than becoming just a thriller ride, it becomes more and more emotional. Early on, Todd said, "Whenever the music gets too tense, let’s not forget the human element." Of course, it is still a thriller, but there is an undercurrent of something bigger for Rob.

How did you work with the sound design to amp up that emotional/paranoiac feel?

The opening of the movie—and in a few other scenes—there is a heavy industrial element to the score that mixes perfectly with the sound design. For that parking garage scene, the sound designer Leslie Schatz created lots of layers to set the feel for the garage. Leslie is really masterful in creating these tonal things that blend perfectly with the score. During the whole post-production, we had a lot of back and forth of him sending me tracks and me sending him tracks to get the sound just right.

Were there previous composers whose work helped you craft this score?

There are always composers I love, but in this case, it was more movies than music we turned to. Todd really wanted me to look at classics of the 70s whistle-blower genre. We talked a lot about All the President's Men, The China Syndrome, and then, as a later example, The Insider.

How did you get the deep, repressed sound in the score?

From the start, Tood was clear he wanted the sound to feel heavily processed. Other than that long piano piece, all of the music, all the strings and instruments, are heavily processed. He wanted the music to never feel completely organic. A lot of tracks have a lot of pads and electronics that are doubled, but not in the sense of augmenting the score. The base of the score is electronic, and the live strings are doubled to make them into a third thing that is neither organic, nor electronic. Much of the piano work includes lots of echoes, delays, and glitchy sounds to highlight this idea of the organic being affected by something chemical. This feeling of something chemical corroding the sound of the instruments becomes an aural analogy to what is happening in the film. Likewise, there is a lot of looping, because every time a note gets looped, it gets degenerated just a little bit more. You still have the original sound but with each repetition, it becomes grainier and more degraded. 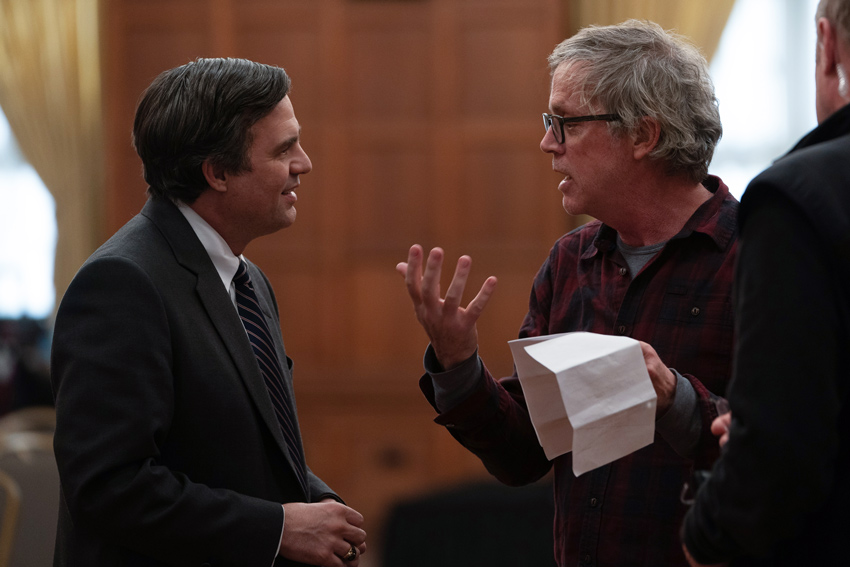 While much of the score emphasizes the film being a thriller, how did you use the music to remind audiences of the ecological disaster at the story’s heart?

Musically speaking, that was the thrust of the final part of the score. The last third of the film becomes progressively more about highlighting the human cost to these people. As such, the music in the last third music becomes more emotional and I think more human. We allowed for the music to strike a note of real sadness. That tone was in the film from the start, but in the first part it was under the thriller genre's cover of darkness.

Did the instrumentation change in the third section?

As the story becomes more about the people and less about the tensions of the case, the music becomes floatier and less tense. In the first act, when we are trying to figure out what is going on, the tone is very suspenseful. Then the music has a sort of cat-and-mouse feel in the legal proceedings. In the end, it is less about who did it and more about the human cost. The music becomes slower and sadder. The textures become a lot less dissonant and much more elegiac as the film reaches its conclusion.

How would you like audiences to react to the film?

I hope they feel outrage at what happened. When I started the project, I did not know the full extent of what happened, and it was pretty heartbreaking. The other point was emphasized by Rob, that we as individuals need to protect ourselves. The people have the power to join together and to protect each other. It's not going to be the EPA or the government or anybody else. It has to be us. Something can be done, but people have to join together with a common purpose.