Tricks And Treats: Children Dress Up As Our Favorite Characters

“As any parent knows, kids love playing pretend,” points out Maggie Storino, the parent behind Don’t Call Me Oscar, a site in which her kids stage scenes from Academy Award®-nominated films. There is no better proof of this maxim than Halloween during which kids of all ages don outfits of all shapes and sizes, including many characters from Focus Features films.

To celebrate the pleasure of playing pretend, we are profiling two masters of dress up to see how they and their kids remade iconic characters and unforgettable scenes in children sizes. From Moonrise Kingdom to Darkest Hour, these kids give their own special spin to some of our favorite films. 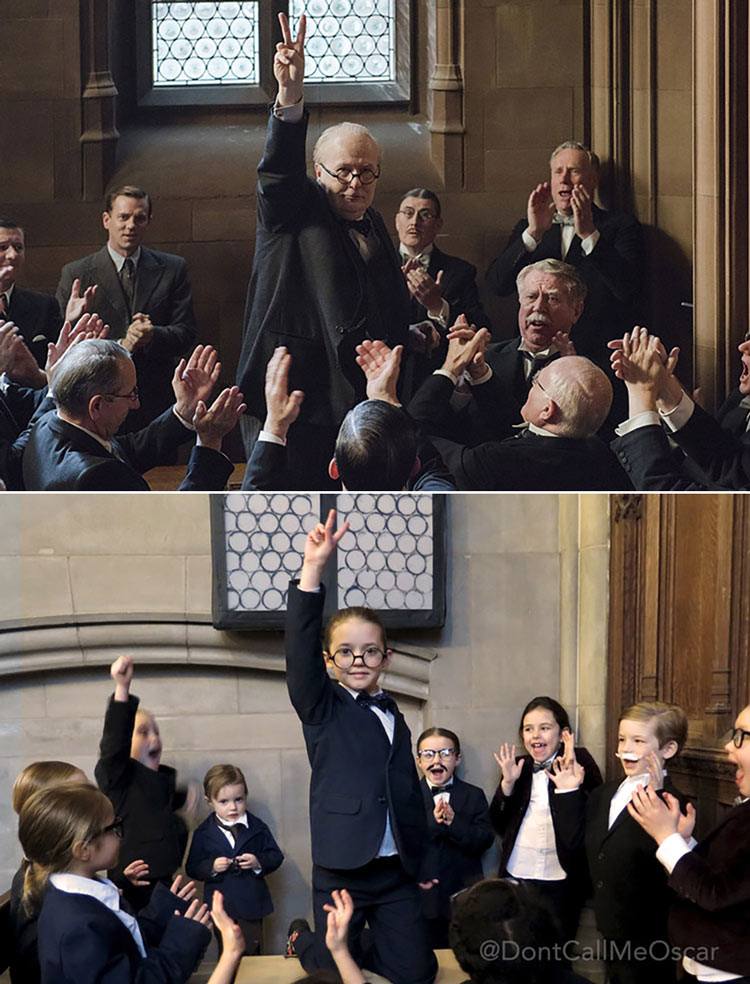 The idea of Maggie Storino’s photo project Don’t Call Me Oscar—which has become an Instagram sensation, even getting written up in Vanity Fair—came to her by accident. After getting a black tutu at a baby shower eight years ago, Maggie photographed her 5-month-old baby Sloane as a character from Black Swan. “Because it made our friends laugh, we tried it the next year,” recalls Storino. “This is simply a fun way for our kids to spend the Chicago winter.” In recreating a crucial scene for Darkest Hour, the kids had a blast “because they could be rowdy in a church” (that doubled as the British House of Commons), Storino remembers. To incite such fervor and enthusiasm in her pint-sized cast, Storino asked them to remember how they felt when the Chicago Cubs won the World Series. After practicing Churchill’s iconic victory sign for weeks, Storino’s two-year-old daughter Sloane was all set the play the role that won Gary Oldman an Academy Award®. Unfortunately, on the day of the shoot, she kept getting the number of fingers wrong. Luckily her understudy, sister Sophia, “happily donned the Harry Potter glasses and stepped in as Churchill,” recalls Storino.

Get Darkest Hour now on iTunes or at Amazon. 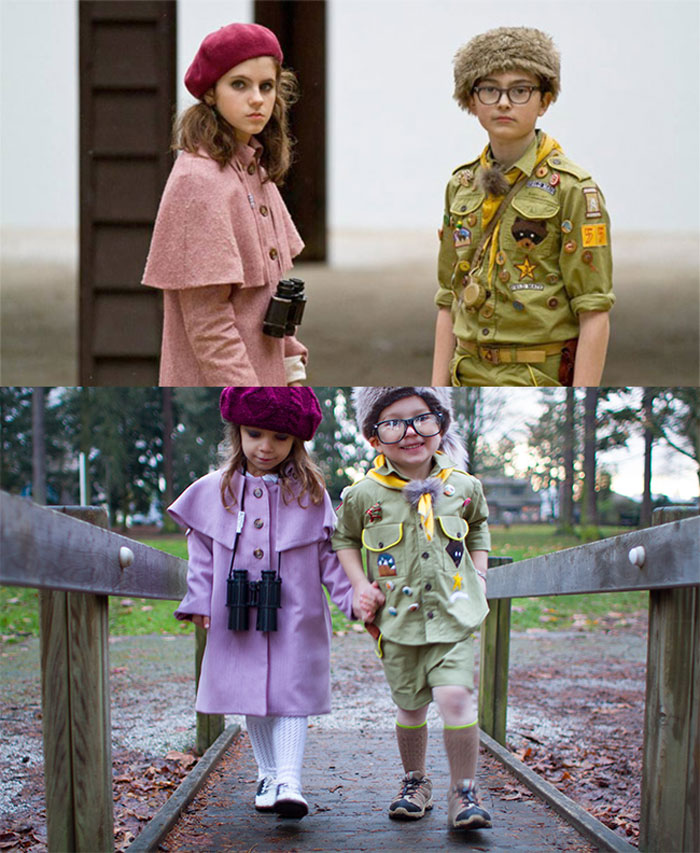 Sewing blogger Kristin wove together her love of film and fashion to create a costume site for kids with the friend Jessica (whose posts can be found at A Little Gray). “We love movies and just thought it was a fun and inspirational design challenge that made us smile,” explains Kristin about the reason they started Film Petit. One movie she loves is Wes Anderson’s Moonrise Kingdom. “The colors and design of the movie really inspired me,” says Kristin. After turning to oliver + s for the base patterns, Kristin finished the costumes adding piping, patches, epaulets, and the capelet for Suzy's coat. “The details matter most in conveying the feeling of the film,” explains Kristin. “I tried to be as accurate as possible and not cut corners.” With her daughter and nephew (both four-and-half-years-old at the time), Kristin recreated the magical romance of Suzy and Sam in a petit size.

Paul Thomas Anderson’s Phantom Thread, which was nominated for a Best Picture Academy Award®, showcases the director’s famous attention to detail and craft in the way it captured the world of a fashion designer (Daniel Day Lewis) in 1950’s London. The same high level of artistry was demonstrated by the kids who recreated a scene from the film. Storino relates: “We created Phantom Thread on a snow day using craft supplies from around the house. We built the stairs out of foam core but they kept collapsing under the weight of our kilt-wearing American Girl dolls. That’s when my five-year-old daughter suggested re-enforcing the stairs with cereal boxes. It worked! The kids loved inflating the balloons (112 in total) and my oldest daughter slipped a green balloon into the shot, 'because it’s your favorite color, Mom.' Sorry, Paul Thomas Anderson, I couldn’t argue with that.”

Get Phantom Thread now on iTunes or at Amazon. 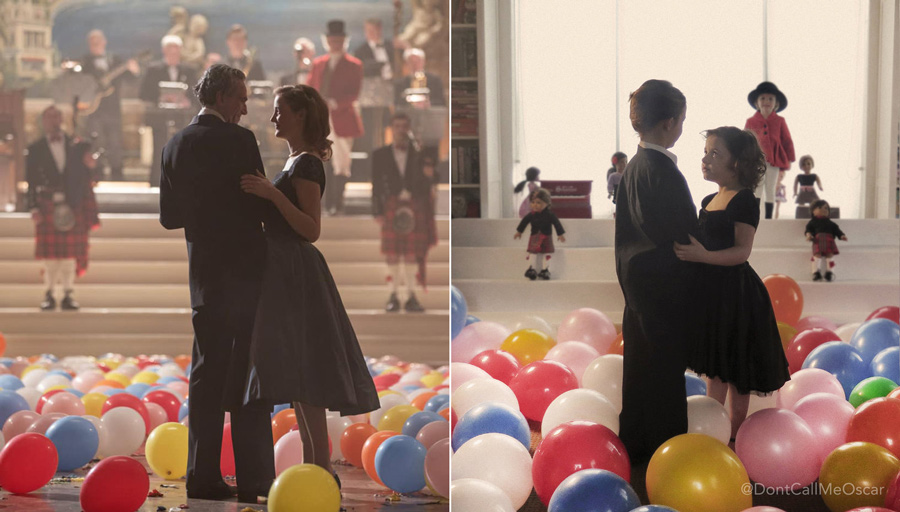 In choosing the films for her tot-sized outfits, Kristin emphasizes, "we were sewing costumes inspired by movies WE loved, not kid movies per se.” The Big Lebowski is one of Kristin’s favorite movies. “My husband and I have it memorized and often use Lebowski quotes in our day-to-day lives,” notes Kristin. “We thought a tiny Dude was just the funniest thing.” Her two-year-old son posed as the dude, getting “so many smiles and comments at the grocery story, mostly from grown men who totally got the joke.” 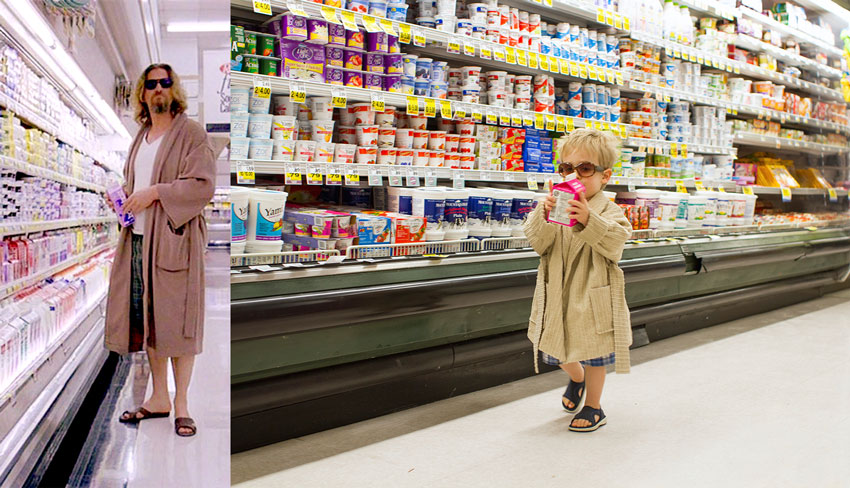