Reread Charlotte Brontë’s classic, then see it brought to life

On March 11, 2011, Cary Fukunaga’s adaption of Charlotte Brontë’s beloved Jane Eyre opened in theaters. After over 20 previous film adaptions (as well as operas, radio plays, and many literary spin-offs), this new take on the classic romance between Jane (Mia Wasikowska) and Mr. Rochester (Michael Fassbender) returned many viewers back to what they so loved about the novel in the first place. For Rolling Stone, Fukunaga has “reanimated a classic for a new generation, letting Jane Eyre resonate with terror and tenderness.”

For the next chapter of the #FocusBookClub, we’re reconnecting to Jane Eyre, both the novel and the film. Reread the book, watch the movie, and tell us what you think about the two on social with #FocusBookClub.

Get Jane Eyre now on iTunes or at Amazon.

The official trailer for Jane Eyre

Published in 1847 under the name Currer Bell (Charlotte Brontë’s nom de plume), Jane Eyre: An Autobiography became an instant bestseller despite—or perhaps because of—it being labeled a “naughty book”  by some. People were immediately taken with the novel’s resilient heroine. Raised an orphan, Jane took a position as a governess at Thornfield Hall, where she was first terrified of, then fell in love with, the master, Edward Rochester. More horrors, however, awaited poor Jane before she would find her way to marital bliss. While not autobiographical, many elements of the story mirrored Brontë’s life, including the heroine’s unflappable determination. The eldest sister in the Brontë family, which included fellow authors Anne and Emily, Charlotte continuously labored for her family—as a governess, school teacher, and finally novelist. When her first novel The Professor was turned down, she strove even harder to make Jane Eyre a reality. It proved a sensation. Listed by The Guardian as #12 of their “100 Best Novels,” Jane Eyre continues to be discovered and beloved by each new generation. 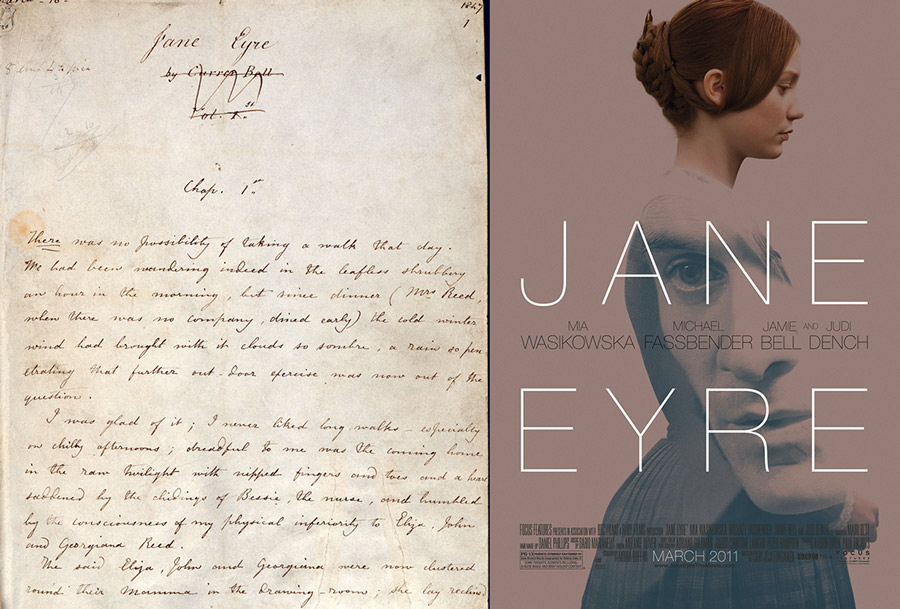 The first page of the Jane Eyre manuscipt; the film poster.

In adapting Jane Eyre, the producers wanted to create a version that would stand apart. Screenwriter Moira Buffini, who’d loved the book since she was 15, saw the tempestous romance as a spooky gothic tale. To direct, they picked Cary Fukunaga, who had just made the hard-hitting Central American thriller Sin Nombre. Producer Allison Owen saw Fukunaga as “a visceral filmmaker with a strong auteur voice—something that we very much wanted for Jane Eyre." In a twist of fate appropriate for this Brontë yarn, actress Mia Wasikowska, who was reading the book for the first time, pushed her agent to find out if anyone was doing a new adaptation. Within months, she was on set as the new Jane Eyre, with Michael Fassbender as her Rochester. Hailed as “a splendid example of how to tackle the daunting duty of turning a beloved work of classic literature into a movie,” The New York Times adds, “Mr. Fukunaga’s film tells its venerable tale with lively vigor and an astute sense of emotional detail.”

“I am no bird; and no net ensnares me: I am a free human being with an independent will.”

It was no small task turning 700 pages of Brontë’s prose into a feature-length film. To handle the plot, Buffini restructured the narrative to tell much of the story in flashbacks. To find the story’s spirit, Buffini stressed the book’s scarier aspects. “The genre is not really romance; it is actually gothic thriller,” Buffini explains. ”Jane is a vulnerable young woman in this creepy old house.” By creating “a tale draped in gothic horror that’s actually, you know, haunting,” explains Indiewire. The filmmakers have “crafted a Jane Eyre that feels both classic and utterly fresh.” 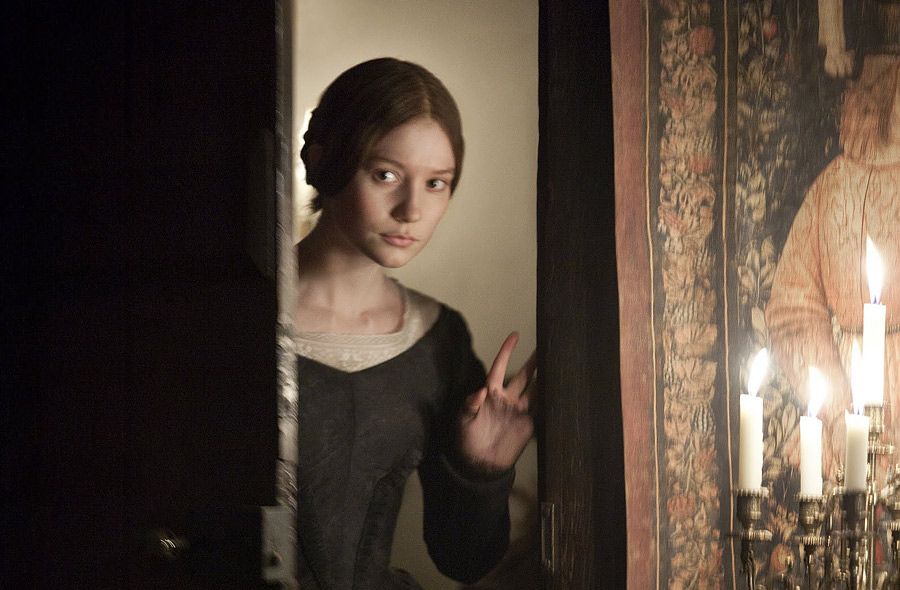 At the heart of Jane Eyre is, of course, two hearts—Jane and Rochester’s impossible, inexplicable, and utterly unstoppable love for each other. To bring that romance to the screen, the two leads found a unique chemistry that honored their literary characters. For The Telegraph, “the film lives or dies by its Jane and Rochester, and I’m inclined to say that the Wasikowska/Fassbender duet puts all others to shame.” Even on set, Fukunaga knew there was something special. "I'm not a highly emotional person,” notes Fukunaga, “but there are powerful scenes between Mia and Michael—and I hope this extends to the audience—that nearly brought me to tears.” 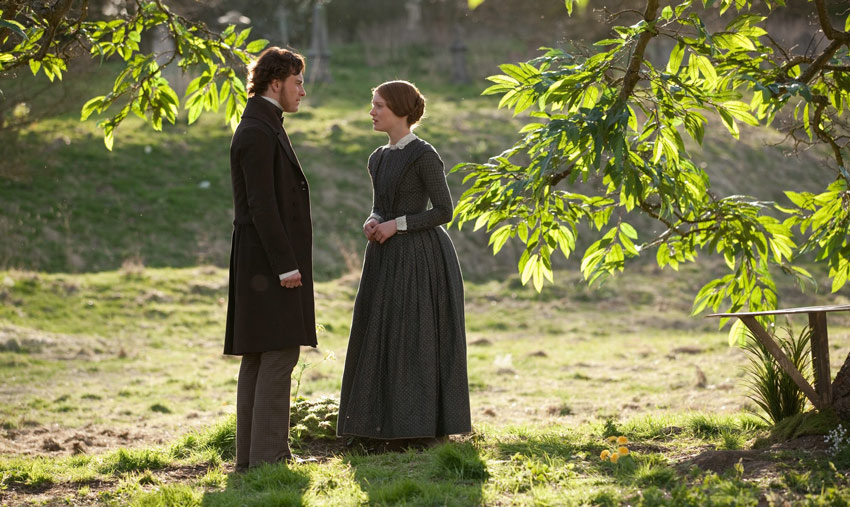 To get the novelistic details that makes Jane Eyre such an admired piece of literature just right, Fukunaga brought together a remarkable team of film artists. The Los Angeles Times notes how “cinematographer Adriano Goldman beautifully captures both the building's candle-lit spookiness and the desolate beauty of the surrounding Derbyshire countryside.” With Dario Marianelli’s swooning score “Jane's yearning and passion is dramatically displaced into the keening of a single violin,” explains The Guardian. And costume designer Michael O’Connor was nominated for an Academy Award® for bringing complex emotions to this costume drama's look. 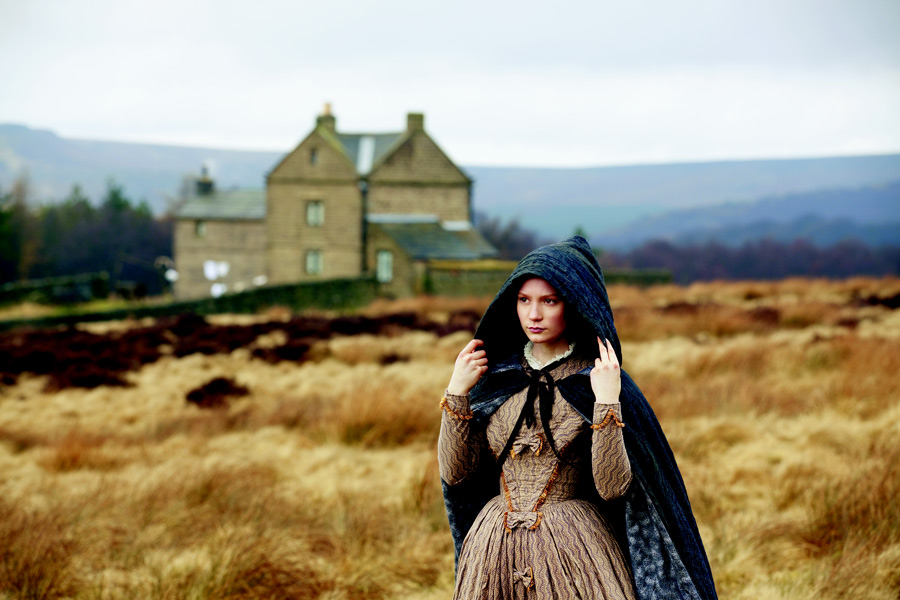 Cinematographer Goldman brings out the lonely expanse of the moors in Jane Eyre.