At 5, ParaNorman Is Even More Frighteningly Fun –– And Fantastic –– Than You Remember.

Seven things that make this stop-motion adventure a landmark achievement

When Sam Fell and Chris Butler’s ParaNorman opened in theaters on August 17, 2012, it proved a revelation. The second feature (after Coraline) from LAIKA provided an eye-popping, stop-motion animated adventure filled with ghouls and zombies that ultimately delivered as much soulfulness as scary thrills. Norman (voiced by Kodi Smit-McPhee), an 11-year-old who can talk with the dead, must use his unique talent to save his hometown of Blithe Hollow from a centuries-old curse. In 2012, IndieWire exclaimed, “ParaNorman isn’t just the best animated movie of the summer, it’s one of the best movies of the year. Period.” In the five years since its release, ParaNorman has scared up even more fans, being listed on the Film Stage’s “Best Animated Films of the 21st Century.”

As part of our celebration of Focus Features’ 15th anniversary, we salute ParaNorman turning five by showcasing seven ways––from 3D printing to breakthrough characters––it has proven more than groundbreaking.

Get ParaNorman now on iTunes or at Amazon.

See the official trailer for ParaNorman.

1) It realized the power of 3-D color printing in animation.

ParaNorman’s technical team mastered this emerging technology to completely revolutionize the nature of stop-motion animation. Confronted by endless technical challenges, LAIKA’s team persisted till they were able to make 3-D printers that created lifelike color-consistent faces for the film’s maquettes. Brian McLean, LAIKA’s Director of Rapid Prototype, told Variety that this new technology “opened the door to all these crazy character designs that hadn’t been available before.” 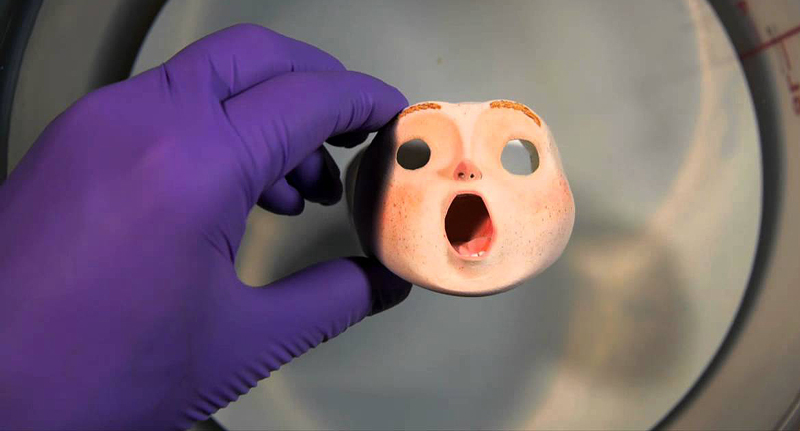 ParaNorman’s new technology provided the filmmakers a way to express more emotions than they had words for. Over 8,800 faces with different brows and mouths were created for Norman alone, resulting in about 1.5 million possible facial expressions. McLean explains to Popular Mechanics, “We can take this age-old technique of replacement animation, mix it with a new technology and get unbelievable performances.”

3) It took stop-motion fashion to a new level.

ParaNorman’s costumes proved fashion forward both in their meticulous attention to detail and their post-modern sensibility. For Norman, artisans hand-stitched over 120 individual outfits. But other characters received equal attention in the way their clothes defined them. Norman’s teenage sister Courtney (Anna Kendrick) got two outfits—a pink velour track suit and a cheerleader outfit—to capture her adolescent spirit. To dress Norman’s ghostly grandma (voiced by the legendary Elaine Stritch), the filmmakers were inspired by TV's The Golden Girls’ leisurewear.

The clothes make the character in ParaNorman.

4) Its voice actors got to interact.

The filmmaker broke with animation tradition--in which characters just voiced their lines--to have Smit-McPhee (Norman) and Tucker Albrizzi (Neil) act out their scenes together. “It’s pretty rare in animated films for the actors to work together,” Smit-McPhee tells Screen Rant. “It really makes the conversations very natural when you actually interact with someone there.”

While ParaNorman starts with a spoof of low-budget, fifties horror films, the filmmakers took their cues from ‘80s blockbusters.  “The movies that I loved growing up—The Goonies, Ghostbusters, Gremlins, Poltergeist--they were family movies, but there were funny and they had edge to them,” Butler told Wired. For him, ParaNorman is “John Hughes meets John Carpenter.”

The spirit of The Goonies haunts ParaNorman.

While ParaNorman is packed full of ghosts, zombies, witches, and things that go bump in the night, its frights are just for fun. "We wanted to use horror conventions and references to tell a story about a kid who's an outsider," Fell tells io9. The filmmakers’ innovative use of genre ultimately provides a key to understanding the main character.  In the end, Norman’s--and the film’s--love of scary stories is more about confronting fear than experiencing it. For Butler, Norman “tries to find solutions in horror films.”

7) It broke down the closet door of animated films.

In a film jampacked with jolts and shocks, one of ParaNorman’s biggest surprises is that Mitch (Casey Affleck) is gay. Having the first openly gay character in a big animated film wasn’t just innovative filmmaking, but essential to the story. “Tackling narrow-mindedness is the heart of our movie,” Butler told GLAAD. “If we were going to champion the idea of accepting people for who they are, then we should really have the strength of our convictions.”