What Kind of Character Are You? Find Your Focus Costume.

From Coraline to Kubo and the Two Strings, fans pay tribute to their favorite films.

What to be this Halloween? Many fans have turned to their favorite Focus Features films for inspiration. Ordering materials online, grabbing a needle and thread, and picking up whatever else was laying around the house, these resourceful movie lovers have created fantastic facsimiles of Focus characters.

As we celebrate Focus' 15th Anniversary, this Halloween we’re turning the spotlight on the audience, whose wonderfully created costumes pay tribute to films and characters we’ve all come to love.

Sam and Suzy from Moonrise Kingdom

Professional photographer Carolyn Hampton shot her daughter and her friend as Sam and Suzy after they decided to dress up as the lovelorn couple one Halloween. “Moonrise Kingdom is her favorite film,” Hampton explains.  For Suzy’s look, Hampton found her dress on Etsy, and her accessories on Ebay and Amazon. For Sam, she found vintage scouting shirts on Ebay, as well as an array of patches and buttons to sew on. 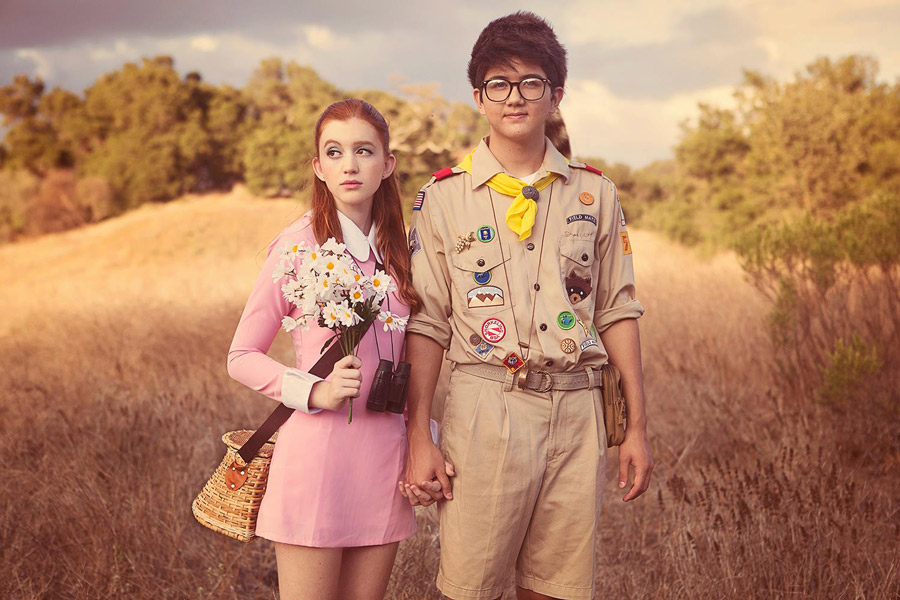 Posing as Sam and Suzy from Moonrise Kingdom

Fish from The Boxtrolls

Logan was just three when his mother Megan granted him his Halloween wish. He “loved The Boxtrolls. His favorite troll was Fish.”  After consulting several images, Megan got busy sculpting a paper mache mask using “an oversize skull, molding clay, and a balloon.”  As a nod to the film’s hero, she printed “Eggs” on her son’s trick-or-treat bag. 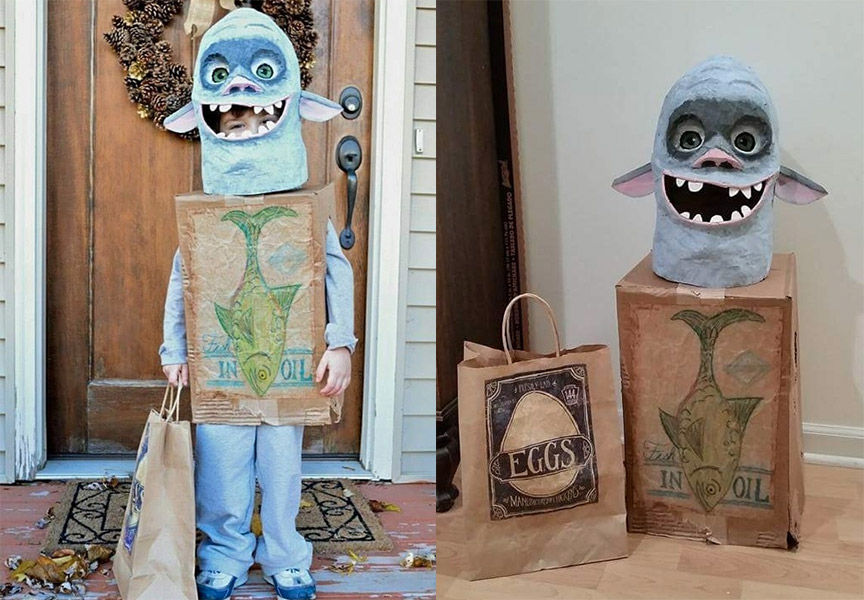 Logan as Fish from The Boxtrolls

Anna Jones helped her daughter Julia relive her favorite memories from Coraline. “Julia just really loved the movie,” explains Anna. “She watched the movie over and over again. She loved all the characters, the style of the movie, and the story line.” For the costume, Anna found much of the clothing she needed from online retailers, like Amazon, but for the doll she got crafty. She ordered a pattern on Etsy to sew it from scratch. Jones remembers, “We worked together to make the doll and I used some extra fabric from her raincoat (it was large one) to make a little rain jacket and boots for the doll.” 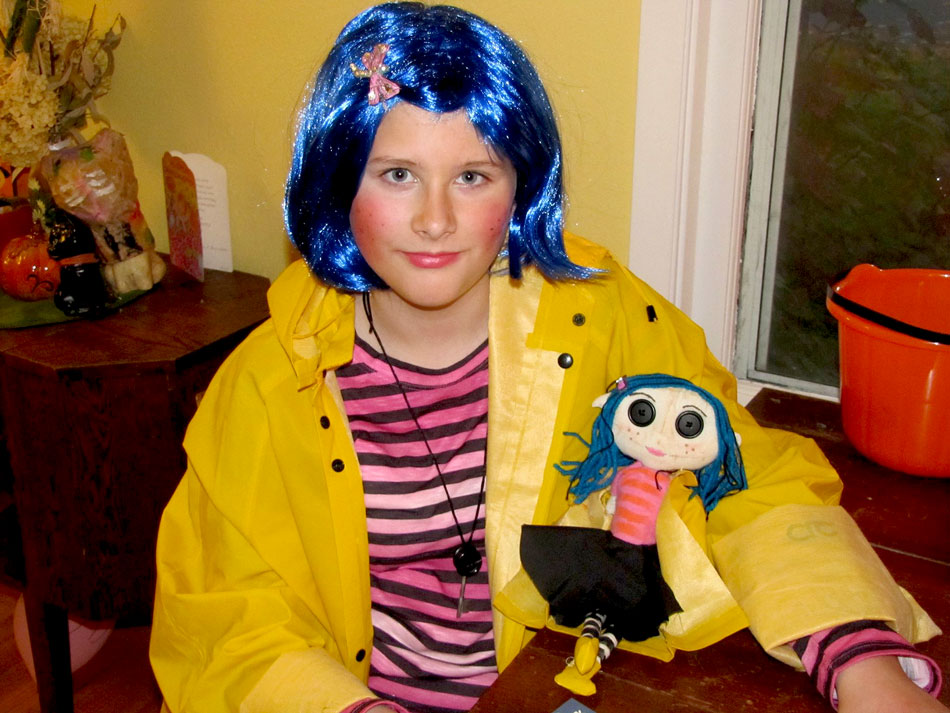 Julia poses as Coraline with her doll.

Kubo from Kubo and the Two Strings

“I was struggling to find an idea for a Halloween costume,” remembers Lee-Sean Huang. “I had recently seen Kubo and the Two Strings and I really loved it. I love the celebration of Japanese culture and non-violence as well.” To make the costume, Huang reached out in all directions. The red kimono shirt came from a site in Thailand, the eye patch from Amazon, and the rest from his home. “The obi belt is from a yukata (summer kimono) that I bought when I lived in Japan,” he recalls. “I had the stuffed animal monkey since high school.” For Kubo’s magical shamisen, Huang used a Taiwanese moon guitar, which he actually plays. It all came together for his Capoeira group’s Halloween party, where he performed the Brazilian martial art in costume. 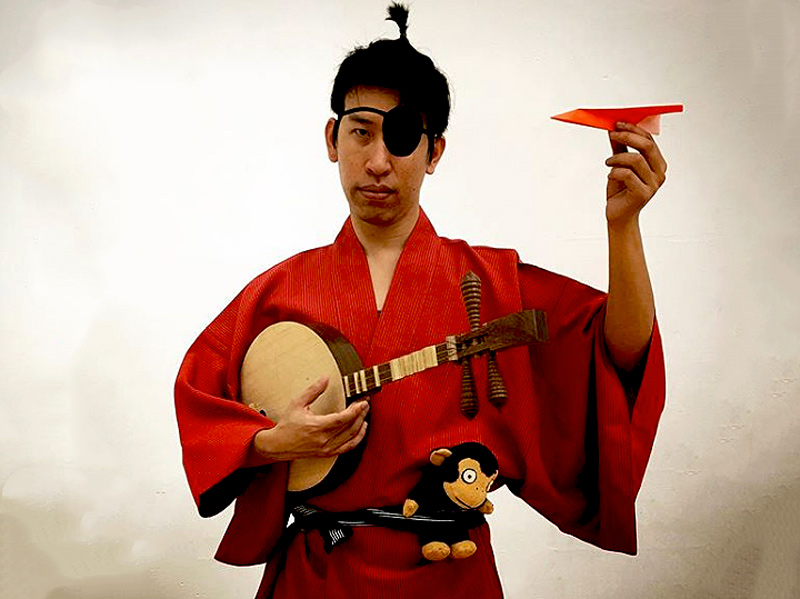 For Javier Ramirez, the inspiration for becoming the hero from Dallas Buyers Club was right in front of him at work. “When I walked into the Focus Features office, I was greeted by that large poster of Ron Woodroof/Matthew McConaughey. After seeing it for so long I figured that would be a fun/easy costume,” explains Focus employee Ramirez. “It also meant that I could grow out a mustache.” For Ramirez, transforming into this iconic figure just meant raiding his closet. “I owned all of the items needed for this costume except for the wig so it was fairly easy to put this all together,” recalls Ramirez. “Most folks got my costume right away…but there were a few that thought I was just some cowboy.” 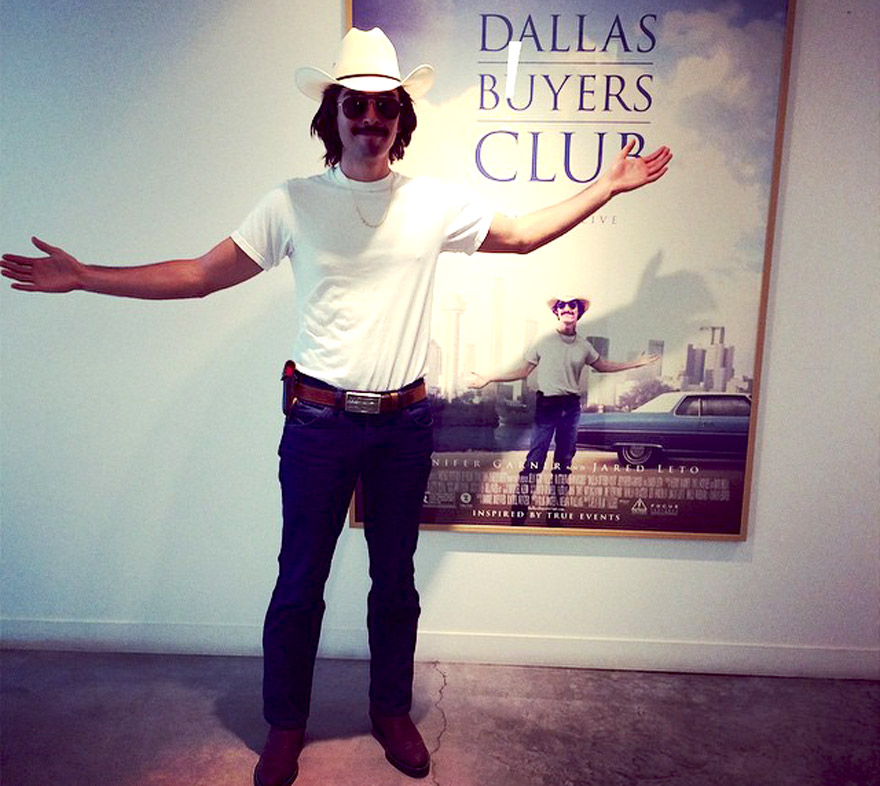 Paul Getto won scariest costume in a company contest for his striking recreation of Justine from Julia Ducournau’s modern horror classic Raw.  For Getto, creating the costume “re-invigorated my love for movies and the costume was fun and creepy to boot.” For the costume, he assembled a lab coat, a wig, fake blood, and bandages. But even better, the “pack of bloody party parts is being re-purposed in my office this year as decor for the season.” 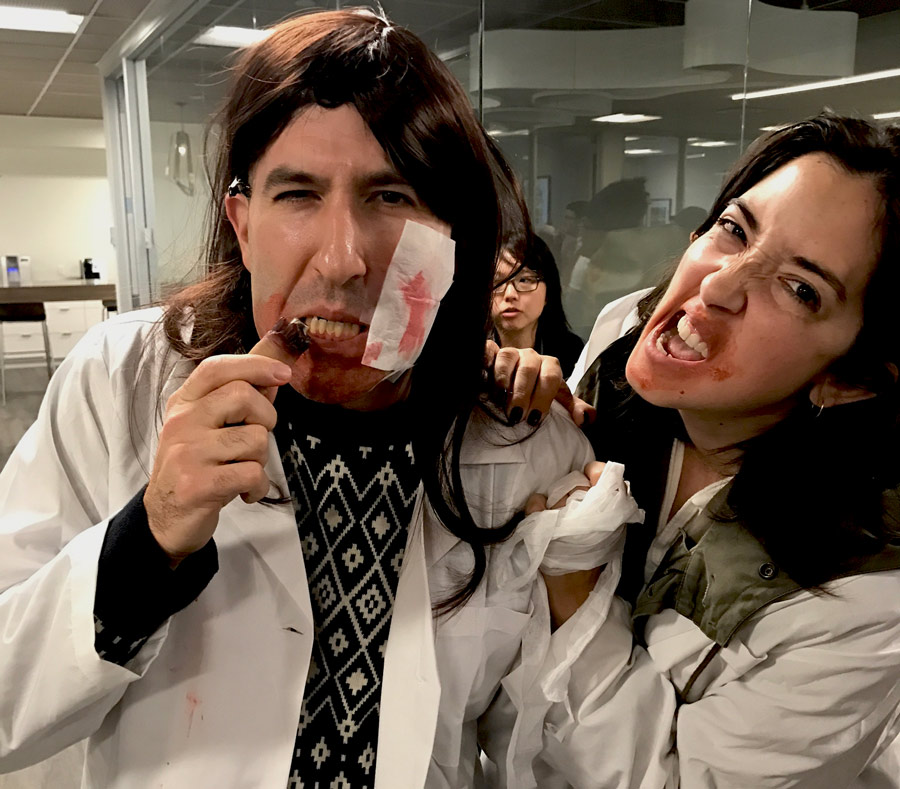