A Look at the Babies of Babies, Ten Years Later

In 2010, Focus Features took audiences on an incredible journey with the release of the documentary Babies by Thomas Balmès. Chronicling the day-to-day lives of four babies in four far-flung locations around the world -- Mongolia, Namibia, Japan, and California -- the film savors the wonders of the first year of life.  Using very little dialogue and stunning digital photography captured at baby-POV level, Balmès both celebrates universal milestones -- nursing, eating, crawling, walking -- and presents stark cultural differences without judgment. "Culturally we know what is the right way to eat, to think, to write, to do everything. It is crucial to change perspectives and to realize that there are many ways of doing things," says Balmès who lives in Paris.

Babies made its American debut on May 7, 2010. As part of Focus Features' 15th Anniversary celebration, we thought it was a good time to catch up with Balmès and hear how life has been treating his four chubby-cheeked stars: Hattie, Mari, Bayarjargal, and Ponijao, now all ten years old.

A peek at the world of Babies

Are you still in touch with the children from your film?

Yes, especially the Japanese one, Mari. A few years ago I happened to bump into her mother. They had decided to move to Paris and just by coincidence she is going to the same school as my kids.

So Mari, who was born in Tokyo, now lives in Paris?

Yes, and she has a little sister Kao, who is insanely cute and insanely French. She was born in Japan but has always been living in France. She is very talkative and speaks to everybody, kind of the opposite of Mari, who's very shy and has more of the usual Japanese character. Mari is very impressive with how quickly she has learned French. She's better than my son in school. 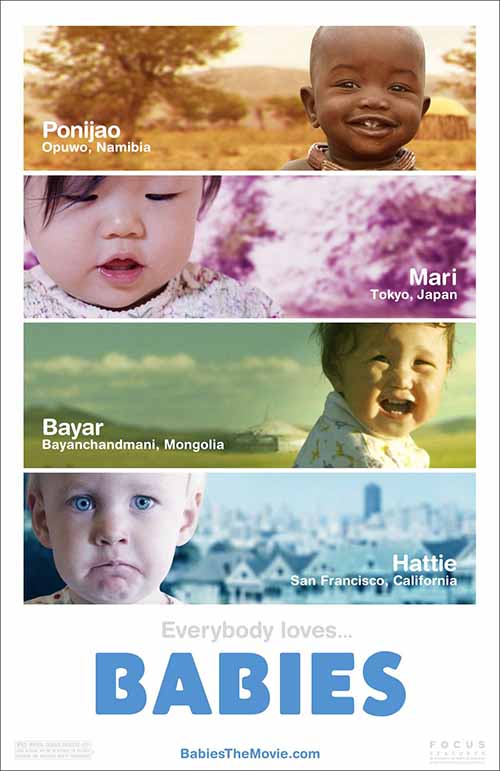 Another star of Babies was Panjiao, who was living with her mother and eight siblings in the plains of Namibia.

Ponijao is still in Namibia. Like most of the Himba people, she only spent a few years in school and now she's back with her mom. Her mother was always a bit reluctant to send her to school. My sense was that once they were going to school, they couldn't follow the traditions and it was almost like losing them for her.

How is Bayarjargal who was living in rural Mongolia with his parents and big brother?

He has a new baby brother now, so there are three boys. He spends the week in the nearby village at school and his parents take him home on weekends. The school is very strict, everybody's dressed in uniforms. Bayar is doing very well. He's a very good student and he's still very cute.

And finally, tell us how Hattie in San Francisco is doing.

She's in Oakland, California. Her mother is teaching educational design at Stanford University, and helped to create a Montessori charter school. Hattie is very, very, very good in school and working a lot. And she loves football -- how do you call it in the US, soccer? She really has changed a lot. She might be the one who has changed the most.

Will there be a Babies 2?

I would love to follow them for a year of schooling and see how their education differs. But I would follow them again at any age, even when they are 20, 25, or 30. Every stage is fascinating. It would make so much sense to see what they become.

Focus Features is proud to be celebrating our 15th Anniversary in 2017. Sign up for the Focus Insider newsletter to be first in line for free advance screenings, world premiere travel packages, weekend set visits, and so much more!