In 2008, after winning the Academy Award® for Best Picture for No Country for Old Men, Ethan and Joel Coen shifted back into hilarity and high jinks with their comedy Burn After Reading. Tilda Swinton plays a disgruntled wife, who, wanting to ditch her alcoholic, recently fired, CIA analyst husband (John Malkovich) for her sleazy lover (George Clooney), makes a small error that cascades into a comic chaos. Hoping to get financial dirt off her husband’s computer for a potential divorce, she mistakenly copies to a computer disk his in-progress memoir. When she loses the disk at her gym, her trainer (Brad Pitt) and his friend (Frances McDormand), mistakenly believing it contains national secrets, attempt to sell the disk, first back to the CIA, then to the Russians. When the film was released, Burn After Reading was greeted as the Coen brothers at their hysterical best. “A bad idea gone wrong—one poisoned at the root by idiocy and then made worse by every poltroon who comes in contact with it,” laughed Salon. A decade later, critics saw it as a brilliant forecast of the world to come. “Burn After Reading is at its heart a movie about how we navigate a world flooded with information and disinformation,” wrote GQ. “In the nine years since the film was released, the quantity of information out there has only grown even as the overall quality has diminished.” To celebrate Focus Features' 20th year anniversary during the month of April, we are paying tribute to some of our most remarkable and memorable comedies like Burn After Reading.

Watch Burn After Reading on iTunes or Amazon.

The official trailer for Burn After Reading 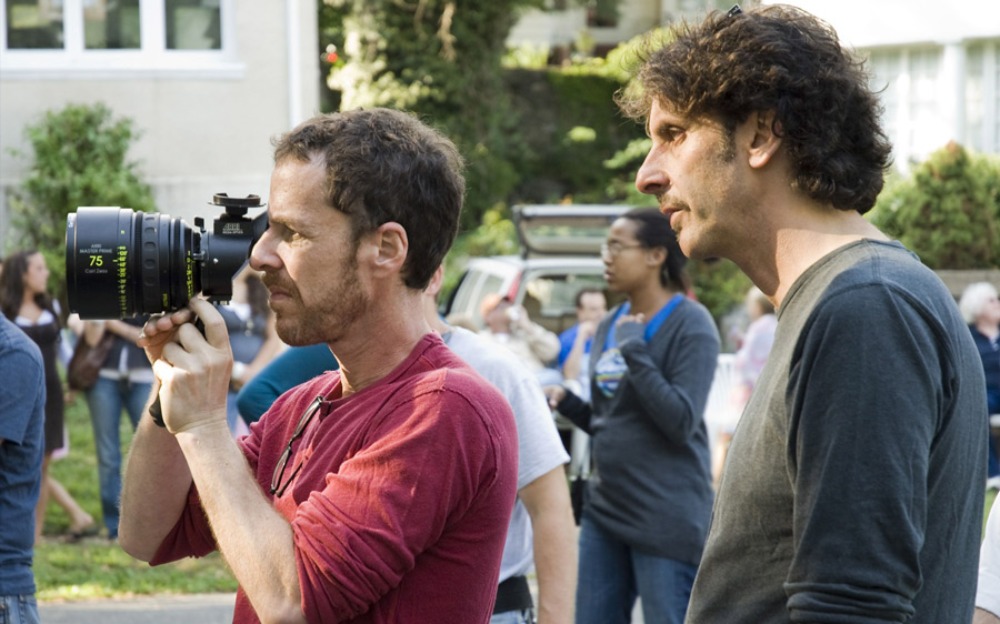 Ethan and Joel Coen on the set of Burn After Reading

For the Coen brothers, Burn After Reading was not born out of a desire to deliver a blistering attack on the state of politics. The main thrust was to get together with their favorite actors in order to make a funny movie. “We wrote it as an exercise in thinking about what kind of parts these actors might play. All of their parts were written for [them],” explained Ethan Coen. “We just wanted to do something with these specific people.” What sort of movie would they write? “Let’s do a spy movie,” Joel Coen remembers they decided. Rather than focus in on 2008’s war on terror, the Coen brothers crafted a plot that echoed the Russian/US conflict of classic cold war thrillers from decades before. In The Coen Brothers: This Book Really Ties the Films Together, Adam Nayman explains, “They’re not genuinely concerned with twenty- first-century geopolitics, but instead with the conflation of political and personal paranoia, which becomes the film’s true subject.” 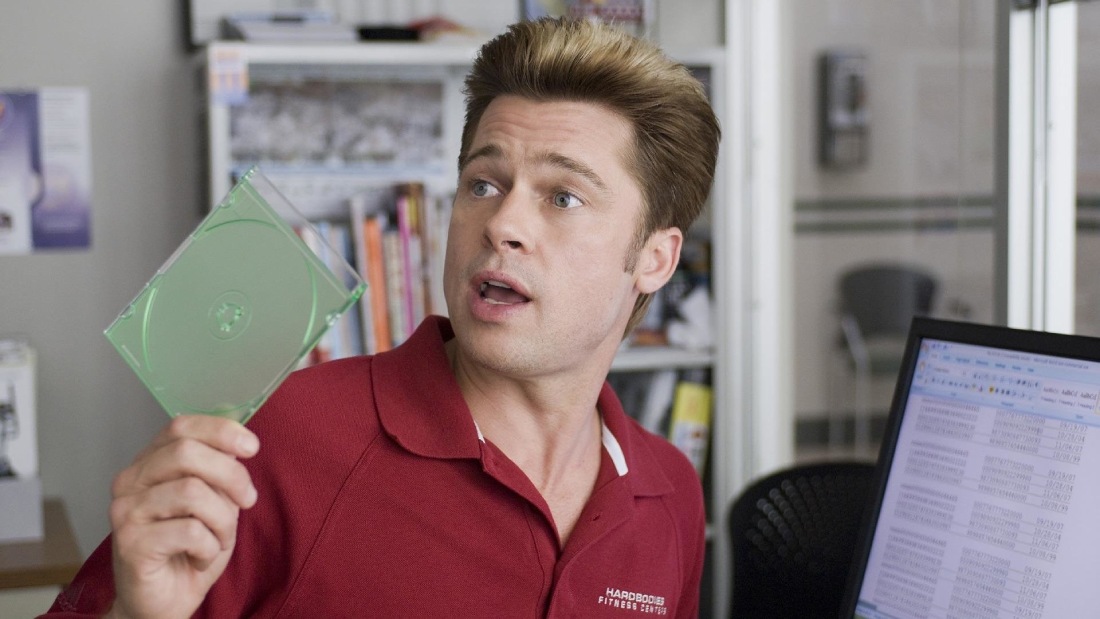 Brad Pitt in Burn After Reading

Focusing on universal human folly, however, was right on brand for the Coen brothers. Many critics celebrated Burn After Reading as a return to the Coens’ unique style of dark comedy. Newsweek proclaimed it “a blackly comic illustration of Murphy's Law, set in the Washington world of CIA espionage, and populated with a cast of delusional dunces who are a wonder to behold.” Even better was how the Coen brothers and their cast meshed. “Let’s begin with the cast, which is nothing short of extraordinary,” exclaimed Rolling Stone. “It’s an A-list group, and every member brings his or her A game.” Like the best of the Coens' ever-growing library, the film spins nonsense into comedy gold. At one point, J. K. Simmons’ character, a CIA director, tells his flunkies, “Report back to me when it makes sense.” For Los Angeles Times, “he’s summarizing this archetypal Coen venture as well as anyone can.” 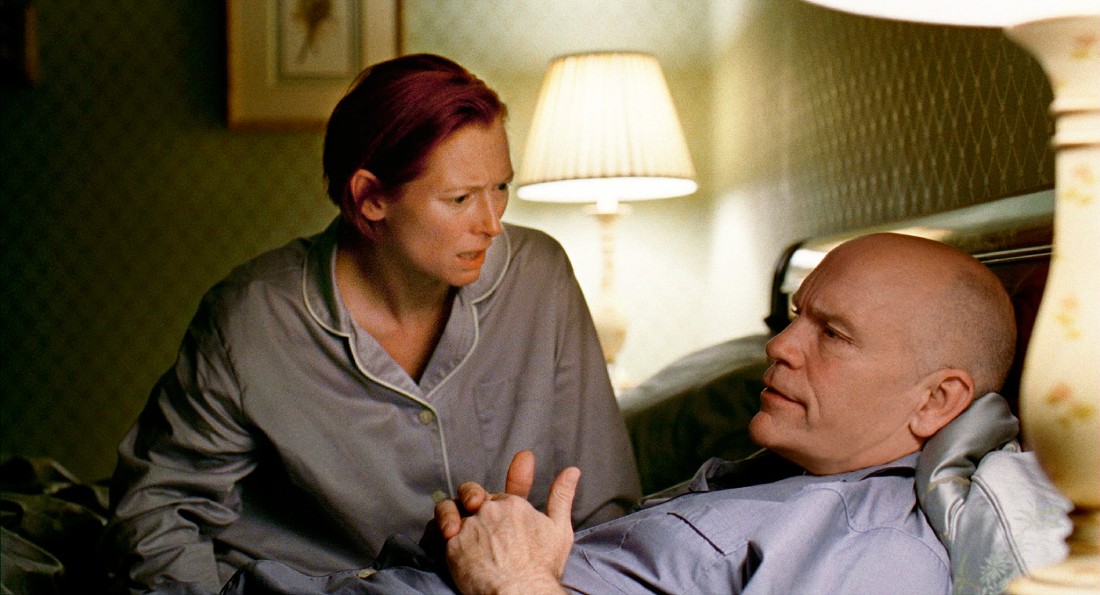 Tilda Swinton and John Malkovich in Burn After Reading

With the Coen brothers uncannily prescient sense of humor, it started to make sense about a decade later. Critics who re-watched the film to celebrate its 10-year anniversary noticed how the silly spy spoof had somehow morphed into a rather brilliant analysis of current politics. In 2008, “Going to the Russians rather than some other antagonistic entity was just another sign that Linda (McDormand) and Chad (Pitt) had no idea what they were doing,” notes Vulture. Ten years later, when Russian meddling in U.S. elections made newspaper headlines, however, the film took on a completely different tone. “More than just a satire on espionage, the movie is a scathing critique of modern America as a superficial, post-political society where cheating of all sorts comes all too easily,” wrote The New Republic several years ago. “It captures the amorality that leads people to become entangled in mercenary treason.” But how could this comedy predict the future? “Anyone can point to the news right now and say, ‘This is absurd,’” explains Rollings Stone. “It takes minds like the Coens’ to remind us that absurdity doesn’t happen overnight.”