Every Friday we're screening another classic Focus Feature live on Facebook, as part of #FocusFridays. Not only does it give us a chance to celebrate our fifteen-year history but it allows for everyone to revisit some of the very best movies in the catalogue for free. Whether or not you're watching the movie for the first time or have every line of dialogue memorized, here are fifteen things to look out for in this week's movie, the mind-bending romantic drama Eternal Sunshine of the Spotless Mind.

1. If you're wondering where the title comes from, well, it's from "Eloisa to Abelard," an epistolary poem by Alexander Pope that was originally published in 1717. (The quote: "How happy is the blameless vestal's lot! The world forgetting, by the world forgot. Eternal sunshine of the spotless mind! Each pray'r accepted, and each wish resign'd.") It is said the poem was a prototypical example of a move away from classicism and towards Romanticism. And it makes for a really great movie title.

2. Speaking of titles, the title sequence for the movie doesn't happen until almost 20 minutes into the film, with the text coming into focus quickly and then fading away, mimicking the mechanisms of memory.

Original trailer for Eternal Sunshine of the Spotless Mind

3. The decision to set the movie in New York was made to make the film as "real and gritty as possible" and thus making the more fanciful elements of the story seem more believable.

4. Since the movie had a modest budget, a guiding principle of the production was "always use invention to solve a problem." This ethos can be felt throughout the film like when …

5. In his own memory, there are two versions of Jim Carrey. This was accomplished without the use of any special effects. Carrey, when the camera was not on him, had to take off his hat and jacket and sit down in the opposite chair (and then do the reverse when he had to stand up).

6. Another nifty lo-fi trick was the kitchen table set, which was actually a distortion chamber, a concept designed during the renaissance that utilizes forced perspective.

7. This seems to have been an uncommonly collaborative production. If you notice the "Groucho Marx presence" in Carrey's apartment, well, that was the actor's idea. Kate Winslet also added the final touches to Clementine's apartment. 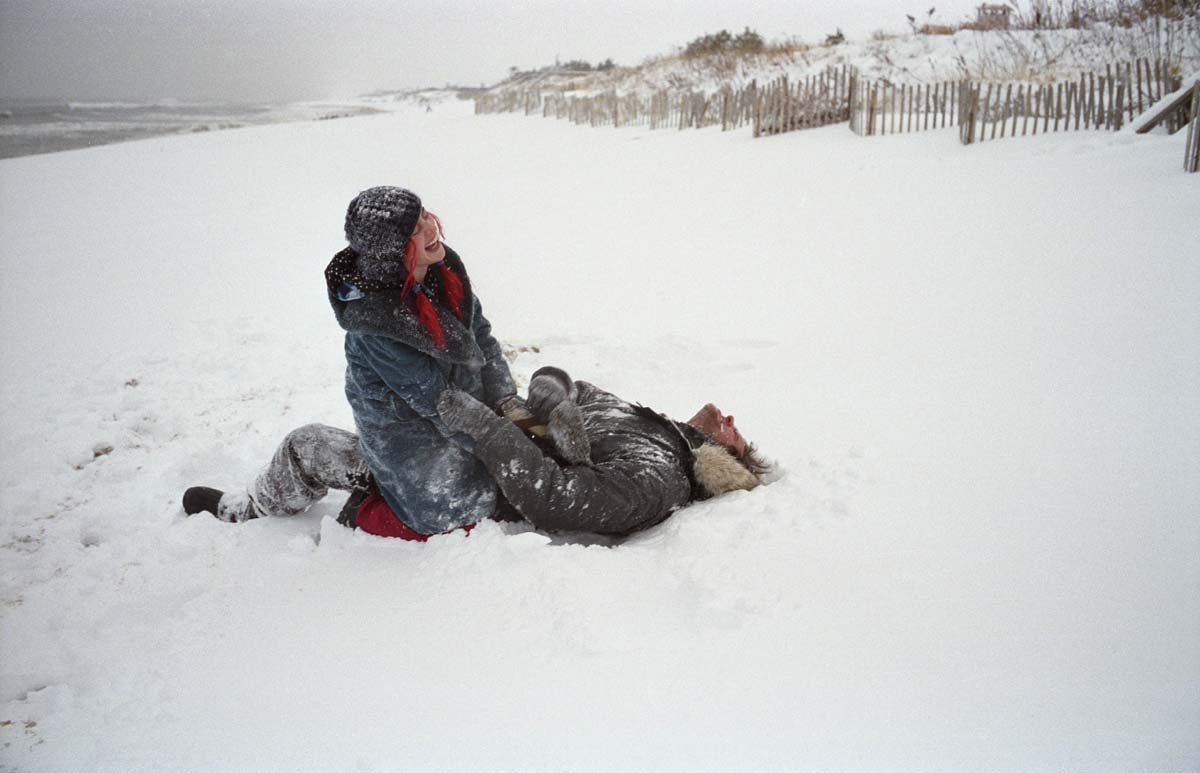 Kate Winslet and Jim Carrey get snowy in Eternal Sunshine of the Spotless Mind.

8. While the script originally had snow, it was deemed too expensive to fake. Luckily it snowed almost every day they were filming. Nothing beats surprise production value!

9. If the dialogue and interactions between the cast seem more spontaneous than in most films, it's due to an elaborate camera system developed by director Michel Gondry, wherein he would communicate to other camera operators via a closed headset system. This meant that they could react appropriately no matter what the actors said or where they went on set. (Tom Wilkinson in particular loved this approach.)

10. Speaking of spontaneity, the cast and crew only heard about the "Elephant Walk parade" sequence hours before the scene was shot. It's one of the most memorable moments in the movie. 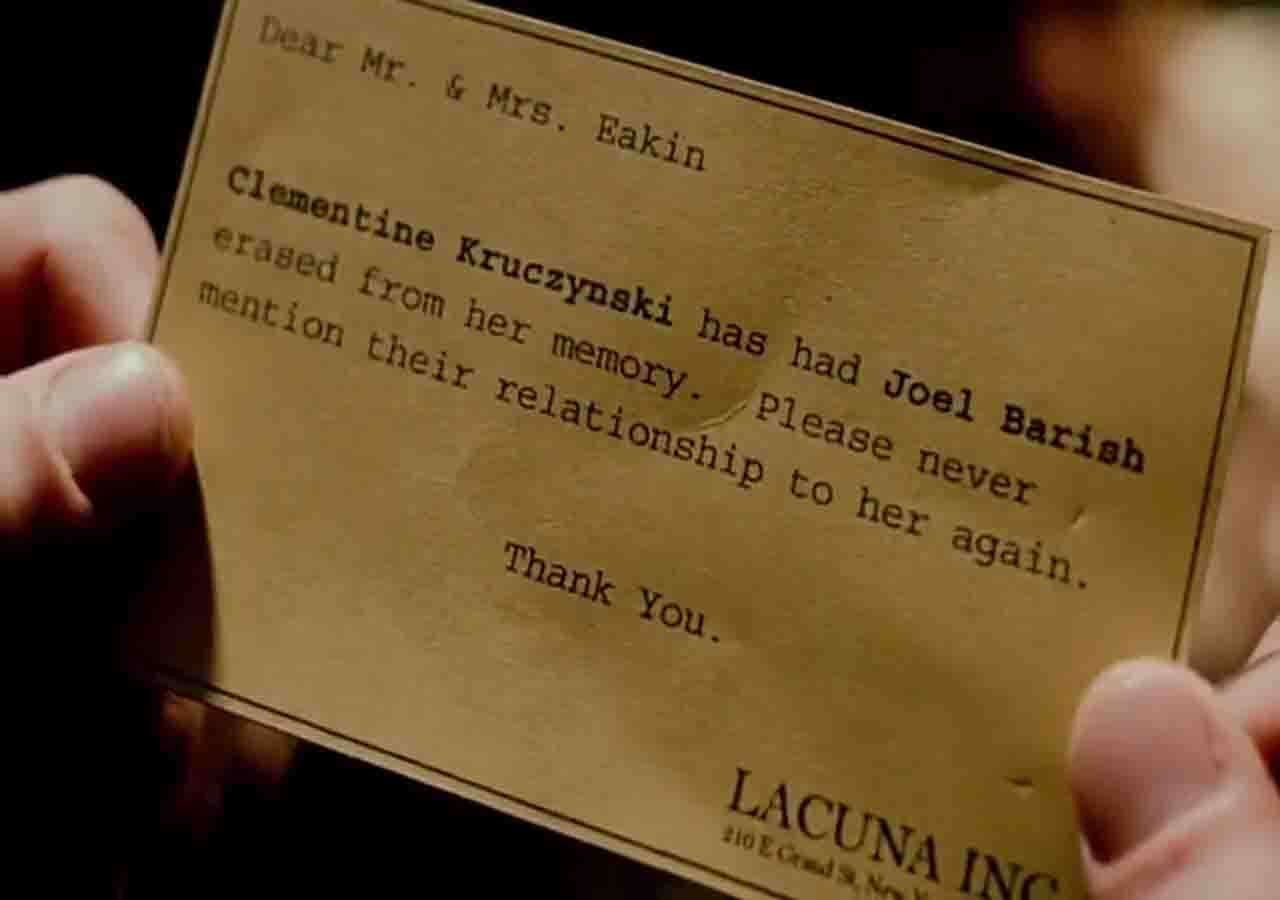 The memory erasure card from Eternal Sunshine of the Spotless Mind.

11. If you're wondering where the name of the memory-erasing company Lacuna comes from, it's a "lake" that can be viewed in medical imagery after strokes or seizures. Essentially it's a small hole filled with fluid inside the brain that can result in (wait for it) memory loss.

12. Did you keep track of all of Clementine's hair colors? Not only do the colors say something about her character, but they are also used as signposts as to where Clementine is in her relationship with Joel. 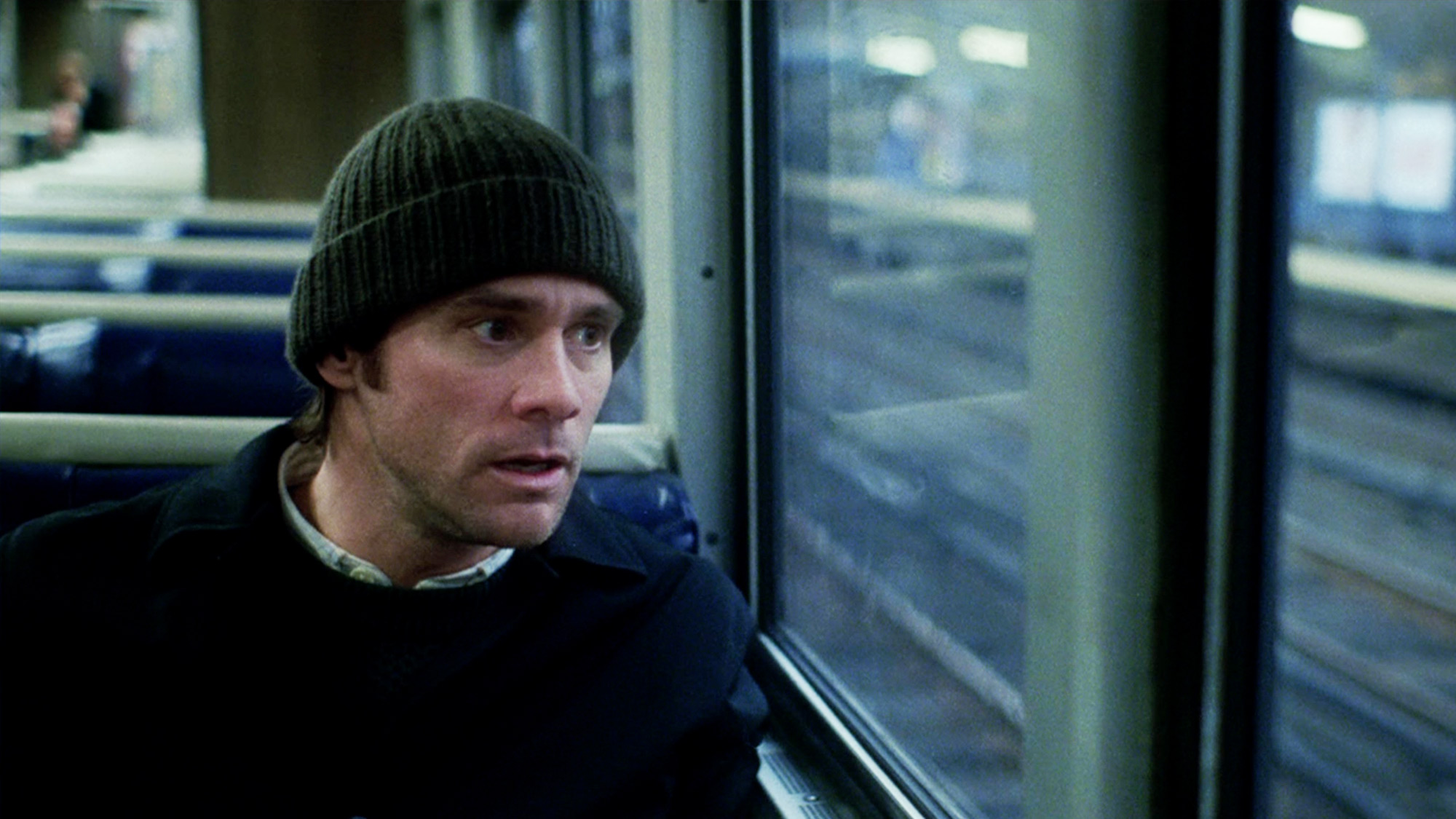 Jim Carrey rides the train in Eternal Sunshine of the Spotless Mind.

13. Anyone who has ever commuted to New York might notice a small switcheroo: a Metro North commuter train from the New Haven line (with a red stripe) fills in for the Long Island Railroad train (which has a blue stripe). Bonus fact: all of the sequences set on a train were actually filmed on a moving train.

14. Here's a glimpse of what could have been: the movie originally opened and closed with sequences set in the future and featuring an elderly version of Kate Winslet's Clementine character.

Kate Winslet and Jim Carrey snuggle up in Eternal Sunshine of the Spotless Mind.

15. The song at the end of the film is Beck's cover of The Korgis' "Everybody's Got to Learn Sometime." The amazing Jon Brion produced this cover and also provided the score for the film. (Brion also sings on a single track, "Strings That Tie to You.")