Food For Thought in Roadrunner: A Film About Anthony Bourdain

And what five appetizing cinematic meals teach us about each other

In Roadrunner: A Film About Anthony Bourdain, Academy Award®-winning director Morgan Neville talks to friends, family, and collaborators to fathom what drove the iconic chef and world traveler. As a public figure, Bourdain whetted audiences’ appetites for diverse cuisines and foreign cultures. “Roadrunner makes you want to jump on a plane, discover a new place, a new culture, eat a great meal, and make a new friend,” exclaims The Playlist. “What could be more valuable?” For Neville, Bourdain had a genius for inspiring his audience to connect with people everywhere. “He was trying to open people’s minds and showing the world to people,” explains Neville. “Showing how, if you break bread with people, we all want the same thing.” Indeed, the root of the word "companion" is one with whom you break bread.

WIth Roadrunner: A Film About Anthony Bourdain coming to theaters on July 16, we are celebrating cuisine's cultural impact by remembering some remarkable meals from Focus films.

The official trailer for Roadrunner: A Film About Anthony Bourdain. 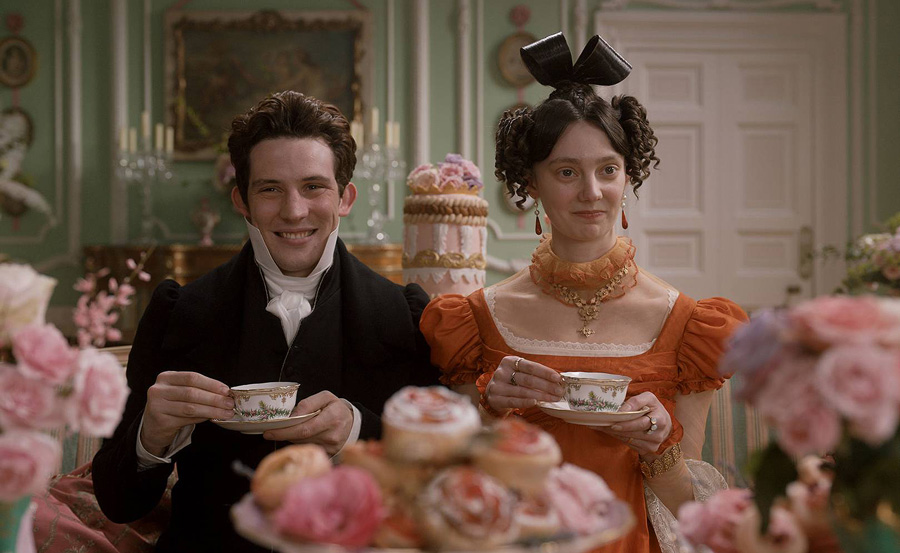 The Eltons (Josh O'Connor and Tanya Reynolds) in EMMA.

In Autumn de Wilde’s adaptation of EMMA. tea is never just tea. When Mr. Elton (Josh O’Connor) has tea with Emma (Anya Taylor-Joy) to introduce his new wife Augusta (Tanya Reynolds), the characters communicate as much by what they do — or rather don't do — as what they say. Although there are platters everywhere overflowing with candy-colored cakes and tarts, most guests don't actually eat anything. When Mr. Elton absent-mindedly reaches out for a slice of cake, his wife slaps his hand away. As Fast Company points out, “a running joke throughout the film is that there are always beautiful desserts laid out, but only uncouth characters… eat them.” The only guest who appreciates how delicious such treats might be is Harriet Smith (Mia Goth), an admission that demonstrates her lack of breeding. In both food and society, appearance alone is everything. With her keen visual sense, de Wilde extended that idea to the film's production design by crafting a purely visual,  scrumptious confectionery world. “I wanted it to be like a pastry shop,” de Wilde remembers. “I told all my departments, ‘The colors need to feel edible.’” 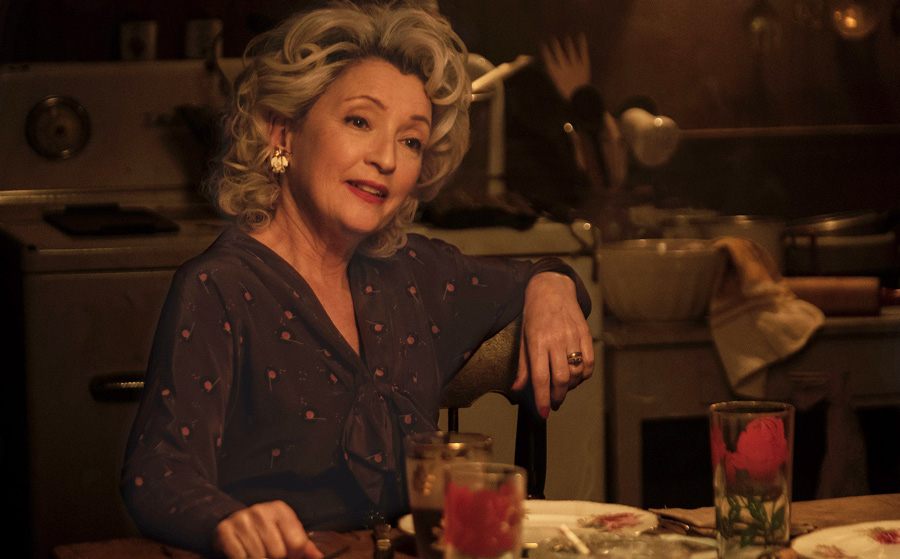 One meal in Thomas Bezucha’s neo-Western Let Him Go dramatically illustrates the tough negotiations that take place around the family dinner table. Affectionately called the “Pork Chop Summit” by the cast and crew, the scene brings together the two families at the center of the film for the first time. George Blackledge (Kevin Costner) and his wife Margaret (Diane Lane) have driven to the Badlands of Dakota to rescue their grandson from a local clan, The Weboys. The boy was unceremoniously whisked away to Montana after the Blackledge’s widowed daughter-in-law married a Weboy. Rather than finding a cozy family dinner, the Blackledges are confronted with what feels like a traditional Wester duel in which, as RogerEbert.com puts it, “Pork chops are the weapon of choice for Blanche Weboy (Lesley Manville), the steely matriarch.” From the kitchen’s dark shadows to the clang of the cast iron pan, every ingredient in the scene is part of a recipe for dramatic tension. You can recreate the taste of the meal without any of the stress with Focus Foodie's rosemary pork chops paired with garlic mashed potatoes. 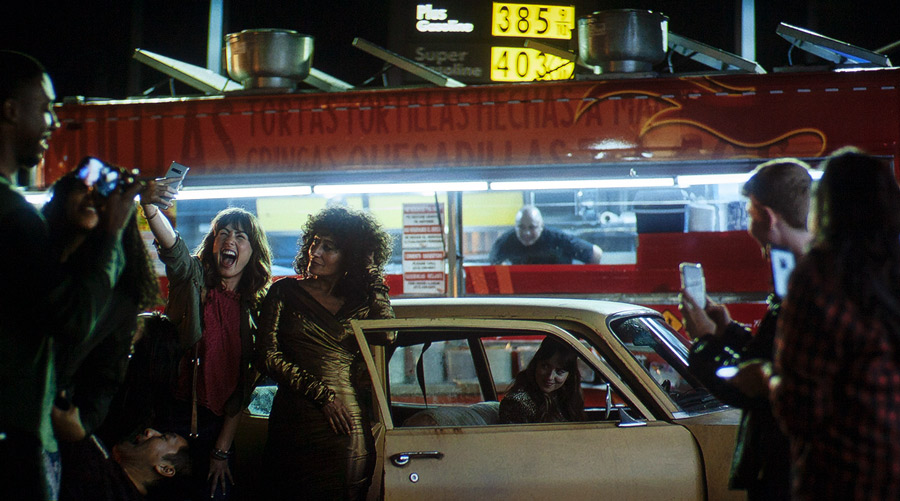 Not all meals need to be sit-down affairs. In a hilarious scene from Nisha Ganatra The High Note, music icon Grace Davis (Tracee Ellis Ross) drunkenly visits a local taco truck by mistaking it for a drive-up window,much to the embarrassment of her assistant (and aspiring music producer) Maggie (Dakota Johnson). ForThe Observer, Ellis “makes the banal process of ordering carnitas from a food truck a moment of inspired comic hilarity.” To add to the crazy confusion, an evening of late-night tacos and truth-telling between Maggie and her boss is hijacked by fans hungry for a selfie with the diva. For your next taco Tuesday, try imitating this late-night taco truck moment with Focus Foodie’s Pressure Cooker Chicken Carnitas Tacos. 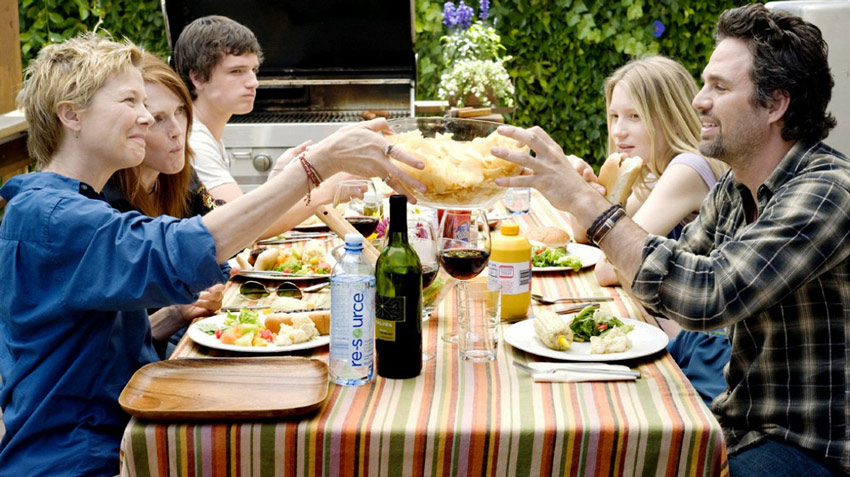 Left to right, Annette Bening, Julianne Moore, Josh Hutcherson, Mia Wasikowska, and Mark Ruffalo in The Kids Are All Right.

The Kids Are All Right’s family picnic

Film critic Jim Emerson wrote that after seeing Lisa Cholodenko’s The Kids Are All Right with friends, “we just had to have a steak dinner — because the one in the movie looked so delicious.” In a comedy about rethinking the definition of marriage, food plays a key role in setting the table for how a family redefines itself. For years Nic (Annette Bening) and Jules (Julianne Moore) have talked to their kids, Laser (Josh Hutcherson) and Joni (Mia Wasikowska), about everything from condoms to college over the kitchen table. After the kids track down their sperm donor dad, Paul (Mark Ruffalo), at his locavore restaurant, the moms invite him to dinner. Serving an all-American meal of frankfurters, corn-on-the-cob, fresh salad, and potato chips, the moms (and filmmakers) thought hard about the right wine to serve at such a unique event. “The pairing of wine to scene — for those in the know — spoke magnums about the characters," noted Howard Rodman, the former president of the Writers Guild of America. “They keep things simple and fresh: a hot-dog barbeque with a Petite Sirah from Kalyra, a Santa Barbara boutique vineyard.”

Watch The Kids Are All Right on iTunes or Amazon.

The official trailer for The Kids Are All Right. 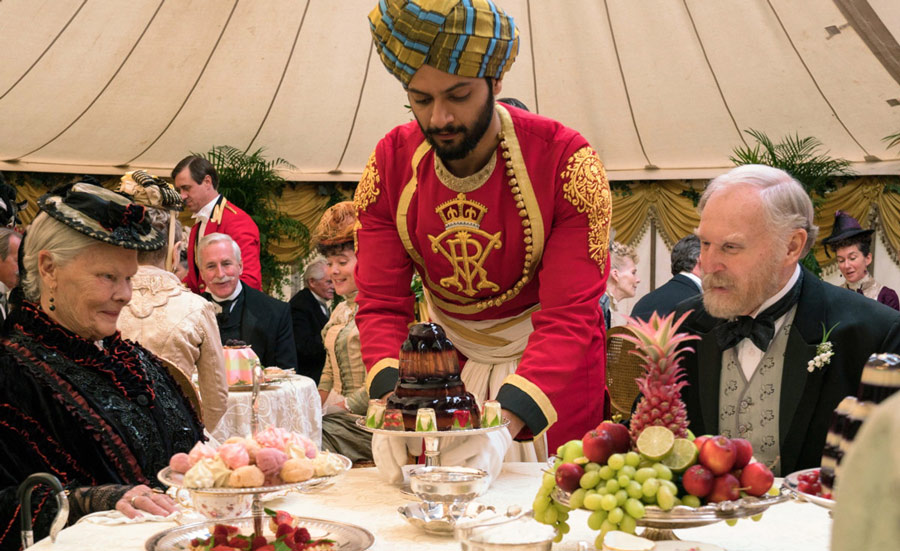 In Stephen Frears’s Victoria & Abdul, two main characters meet over dinner in the most unusual way. Queen Victoria (Judi Dench) was there as the guest of honor, celebrating her Golden Jubilee. Abdul (Ali Fazal), a lowly prison clerk from Agra, had been hand-picked to wait on Indian dignitaries. To recreate this lavish, momentous event, the production team recreated menus from Victoria’s period. At some point between serving the Potage au Macaroni clair, Les Côtelettes d'Agneau aux Pois, and Le Soufflé à la Palfy, the Victoria and Abdul connect in a meet-cute moment of historic proportion. “Abdul does everything wrong,” notes The Observer. “But although his ignorance of protocol and etiquette disrupts the rules, his inadvertent irreverence awakens the aging monarch’s dormant sense of amusement.”

The official trailer for Victoria & Abdul.