Stephen Frears’ Victoria & Abdul captures the remarkable real-life friendship between Queen Victoria (Judi Dench) and Abdul Karim (Ali Fazal), an Indian clerk sent to London to present a coin during her Golden Jubilee who ultimately became her Majesty’s close friend and spiritual teacher. For the monumental task of fitting the royal court with a historically accurate wardrobe, Frears turned to his longtime collaborator, costume designer Consolata Boyle. To bring this poignant story to life, Boyle went beyond sourcing vintage fabrics and designed outfits that would showcase the cultural identities of India and Britain at the heart of the film.

For over three decades, Boyle has skillfully created costumes that dramatize the conflicting passions and politics of historical periods. She has been nominated for an Academy Award for The Queen and Florence Foster Jenkins, as well as won an Emmy Award for the television film The Lion in Winter. But taking on the job of costuming Queen Victoria and her court was especially rewarding to Boyle, partially because of the way Victoria herself used fashion to unite her nation. After the death of her husband, Prince Albert, Victoria’s habit of wearing black provided a sense of stability and continuity during historically turbulent times. We spoke with Boyle about her research, Victoria’s fashion sense, and how the costumes tell the story of India in Victoria & Abdul.

The official trailer for Victoria & Abdul

You are famous for your attention to historical detail. How did you research Queen Victoria, the royal court, and Indian fashion as well?

I had already studied textiles, and Indian textiles in particular. But there is always more to learn in terms of the textures and weavings, as well as the political element of what was going on in India at the time. While the royal household was quite familiar, I really enjoyed finding out more about Victoria personally, getting a feeling for the woman––how lonely she was and how much the royal household that surrounded her narrowed her horizons. 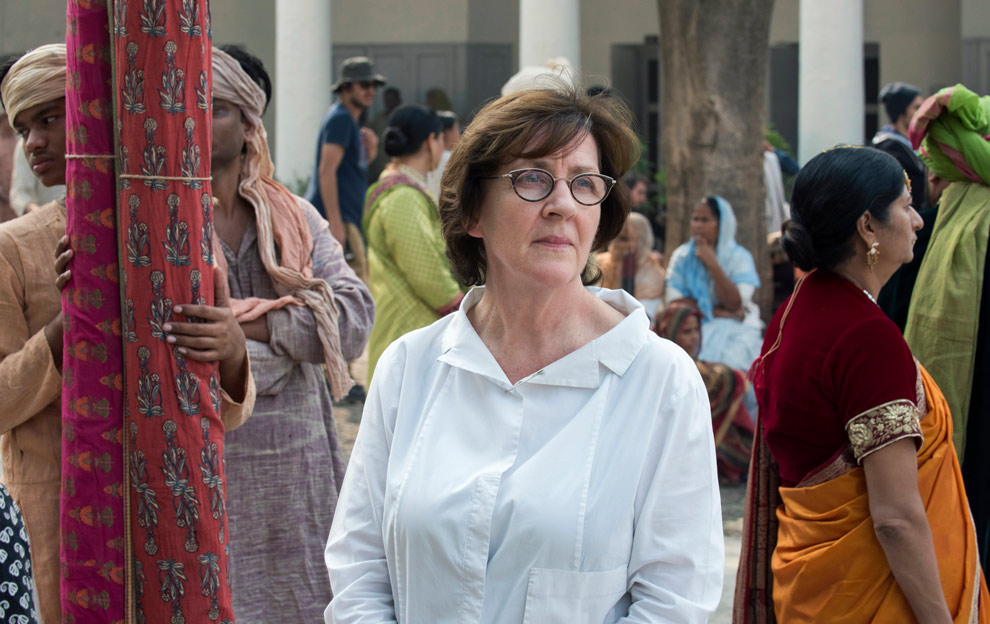 How much did you and Judi Dench work together to create the look for Victoria?

Like all great actresses, Judi understands the power of costumes. Because Victoria was as wide as she was tall––really spherical––Judy needed to be padded heavily. So the challenge at the beginning was to make it as comfortable as possible for her to move around with all that padding. And during that time, ideas and thoughts come out in conversation that really helped mold her look.

In working with Dench and others, what story did you want the clothes to tell?

For me, it is about this woman who epitomized the Victorian era, a character burdened by darkness and her own experience with death. Then this young and beautiful man comes into her life from a world of mystery, and color, and life, a person without any self-consciousness, who was not weighed down by history. 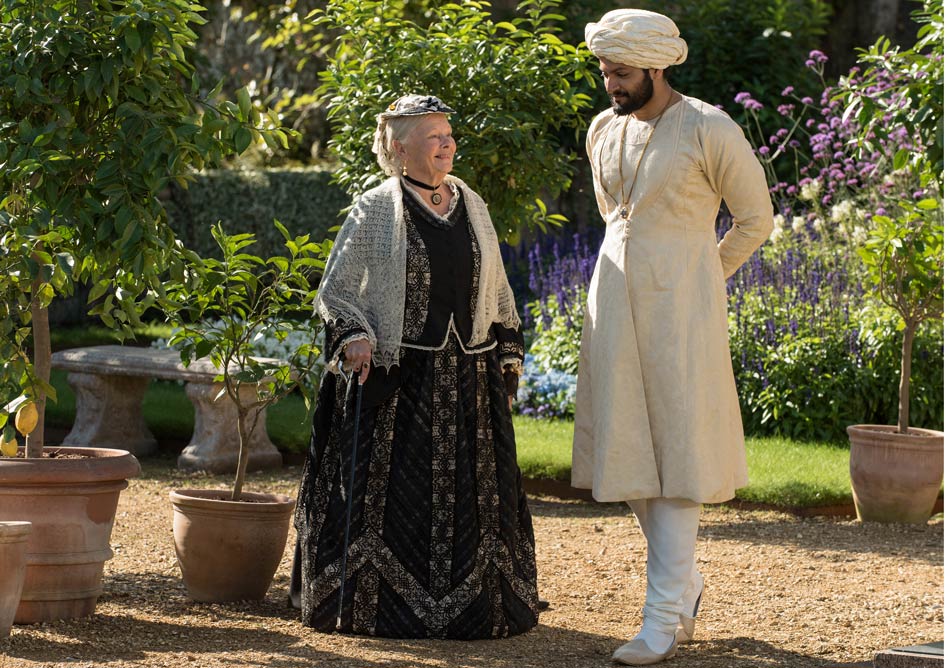 Can you give a specific example of how the costumes dramatized this?

There is a particular moment when Victoria is waiting for Abdul to return from India where the costumes show how her mood is changing. During that scene, I have her in a black gown, but it's decorated with quite a lot of gold. And the little cap that she used to wear is white. She shows her excitement by having her clothes be more embellished. They sparkle with the light reflecting off them. Abdul, on the other hand, who has been away for six months, comes back completely over dressed. 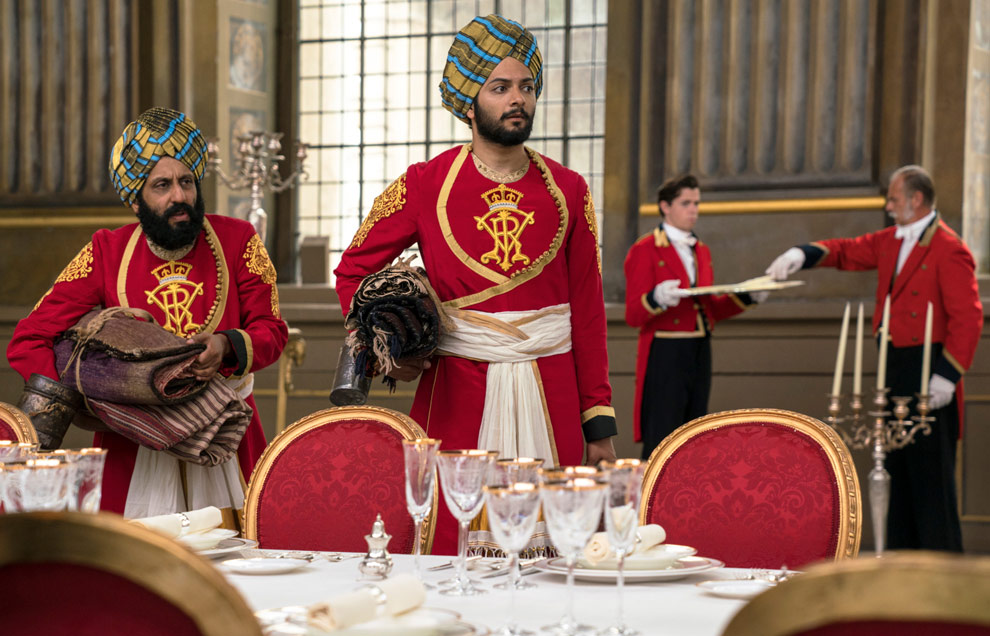 In many ways, the film explores the conflict between British and Indian culture. How did you use costumes to represent that tension?

A prime example would be the awkward mixture of styles that went into the uniforms that were created for Abdul and Mohammed (Adeel Akhtar).  These suits were the imaginings of an English court tailor, a strange mix of a perceived notions of Indian ceremonial court dress and a very English sensibility. The outfits would be red and blue––red at night, blue during the day––that they would be forced to wear. The court uniforms that Mohammed and Abdul are dressed in capture an awkward mix of imperial power and fantasy. Later, when Abdul got to be in charge of his own clothes, there was more conventional garb, like Chukkas and Kurtas. 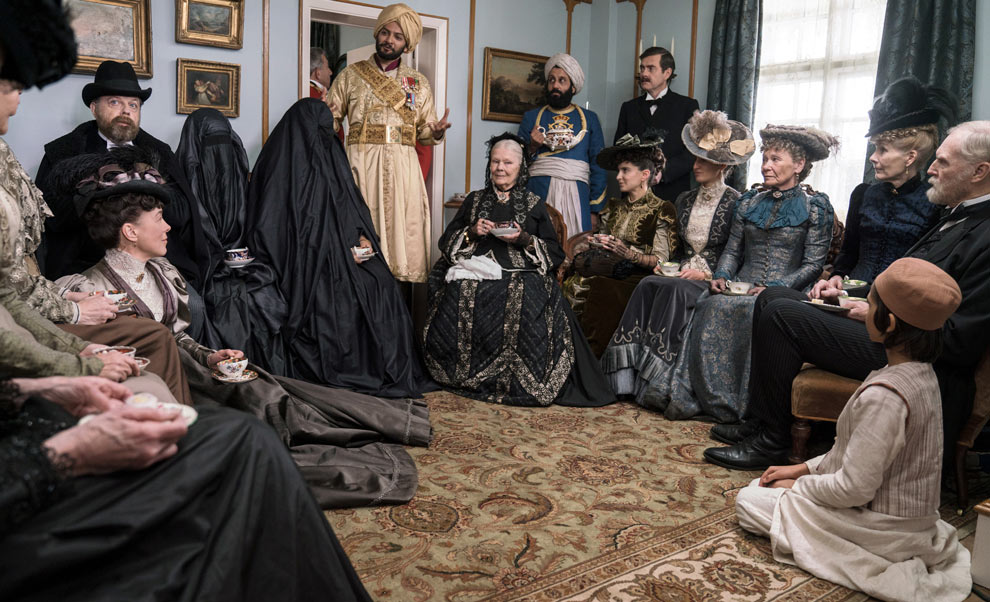 The production design and the costumes work so well together. How did you work as a team?

I spent a lot of time in pre-production talking with Stephen and the creative team, figuring out what is the story we are trying to tell. It is very much about two different worlds—that of the Indian subculture and the world of Victoria—coming together. To tell this story, we wanted to contrast the rigidity of one with the lightness and movement of the other. The big style decision we made early on was about finding the contrast between rigidity and fluidity, between darkness and light, to capture these two worlds being brought together in unexpected ways.

As a costume designer who has worked in a range of historical periods, what makes the late Victorian period so exciting for you?

It is the end of a particular era, before we moved into the sensibility and style of a new world order. During her reign, Victoria dressed very high Victorian with big skirts and her silhouette stayed very consistent. Her look was quite wide—partially because she was quite wide—but also because she held onto a look from her youth. While everything around her changed, she stayed kind of static. Once Victoria died in 1901 and her son took over, society changed drastically, something that was reflected in the clothes by a change in the shoulder line and the silhouette.