Behind The Scenes: The Making of The Beguiled's Buttoned-Up Period Costumes

A lot of work goes into making new things look old. Just ask Stacey Battat, the costume designer behind the perfectly faded girls’ school looks in Sofia Coppola’s new Civil War-era Southern thriller, The Beguiled. Before any stitch was sewn, fabrics were painstakingly aged. “We spent hours and hours on them," says Battat of the process to make the dresses appear as though they have been in heavy rotation for years. "I brought them to the stone washer, to the enzyme washer. We did a lot to fade them before they were ever made into clothes."

The attention paid to costumes was not a surprise for Battat, who has worked with Coppola on other (albeit contemporary) films, including Somewhere and The Bling Ring. As she explains "One of Sofia's great gifts as a director is that she's really good at creating a world. She and I would discuss continuity between other visual departments--set design and cinematography--and then I would go and sketch some drawings or I pull together references for us to talk about."

For the stars of the film, including Nicole Kidman, Kirsten Dunst, and Elle Fanning, stepping into authentically tailored period clothing helped them get into character. "Wearing the corsets made you walk and hold yourself a different way," explains Fanning. "There were so many tiny buttons; you could not get dressed alone, and you could not get undressed alone."

We spoke with Battat about how some of the pivotal looks from the film were achieved.

For her research, Battat dove into the archives at the Metropolitan Museum of Art's Costume Institute and learned that many shirts and dresses of the Civil War era had removable collars. "They would switch them out but keep the dress the same," she explains. "They did it for practical reasons, but we did that more for style. It helped differentiate the days, and it made everyone feel like they had 'new' costumes." 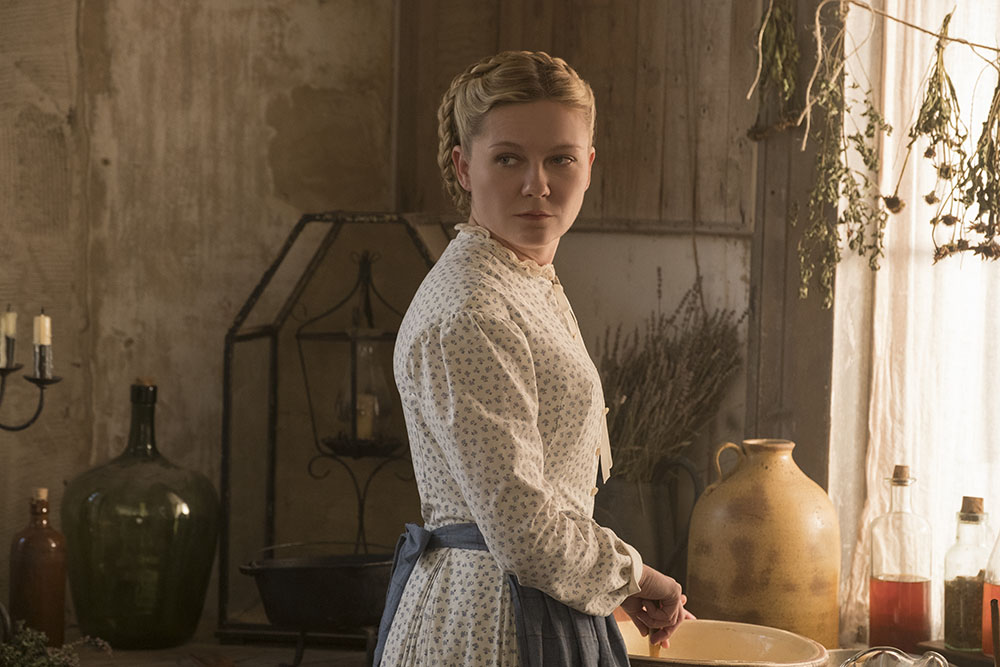 Pastel hues for a coquettish teen

Throughout the film, Alicia (Elle Fanning) is shown in blushing pastel hues that set her apart from the other girls. For Battat, the character's bubbling sexuality is subtly revealed through her clothes. "She is a little vixen trying to escape," explains the designer. "She's always pretending to be innocent, but she's not. She rolls up her sleeves or keeps her shirt slightly unbuttoned." 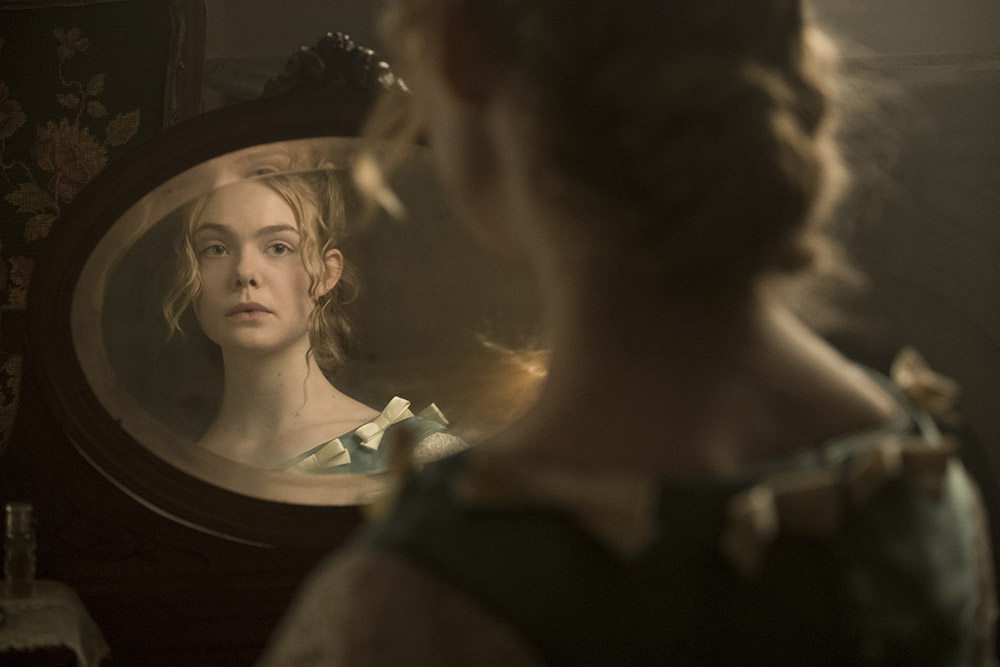 The women of Miss Martha's boarding house dress simply, but once the wounded soldier Corporal McBurney (Colin Farrell) arrives, they have a reason to dress up. One noticeable change in their appearance is the arrival of jewelry. In this image, below, Edwina (Kirsten Dunst) gets teased for wearing a brooch after his arrival. "They were raised to be perfect ladies, so the fact that they even are wearing a brooch in that day is kind of funny," notes Battat. "It's a subtle way of trying to make themselves more appealing to him." 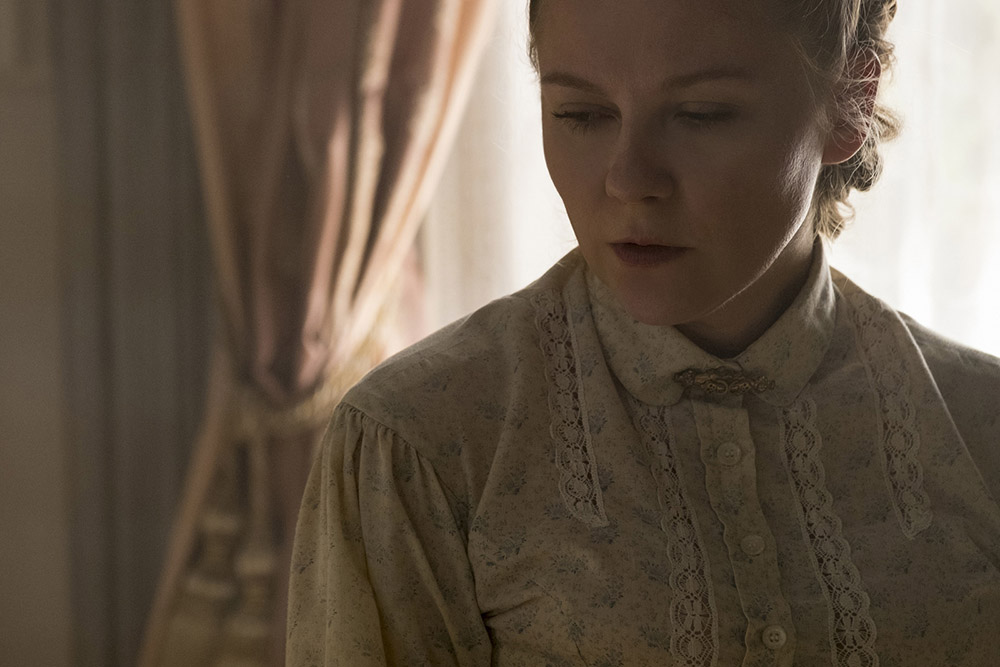 To complete the girls' looks, Battat worked with hair designer Odile Gilbert, who helped recreate styles of the period. "I wanted to make them modern but keep the Civil War aspect to them," says Battat of their braids and twists. "For example, Alicia has with some loose strands. I wanted her to look wild and free." 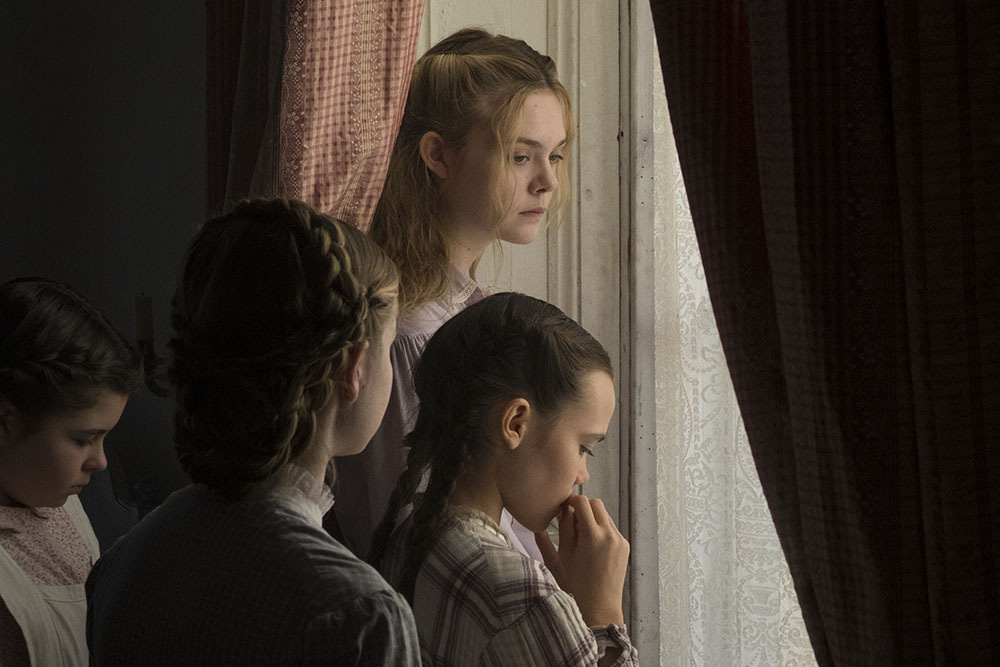 The students of Miss Martha's school for girls

One man, one suit

Like all the other costumes in The Beguiled, there was only one copy of McBurney's coat, which was washed again and again through the production. "Everything was hung to dry," Battat remembers, even Farrell's dark wool suit. "No steaming!" 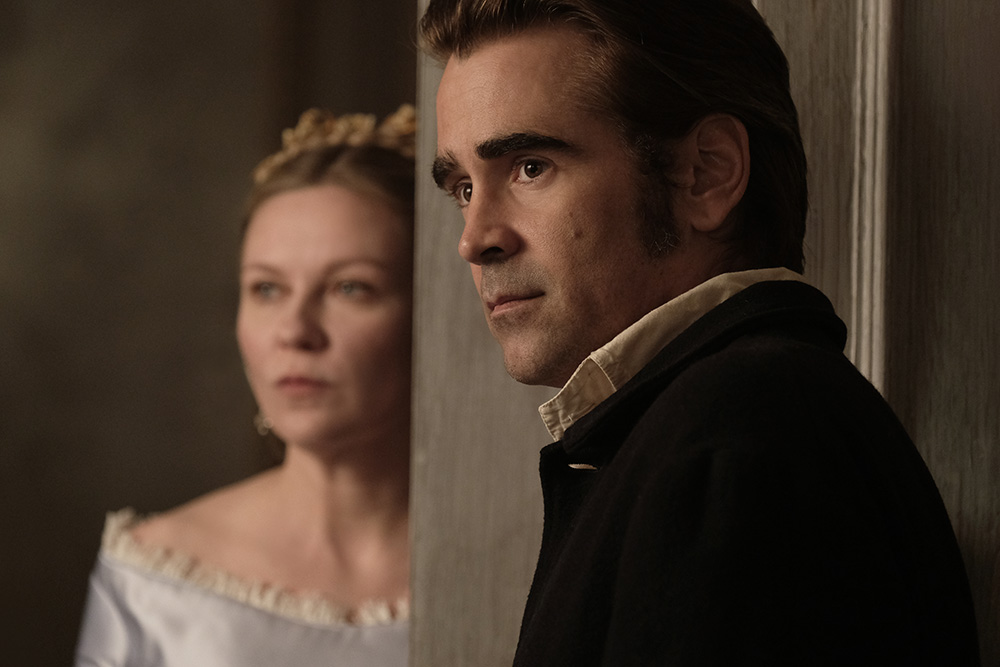