Following the Thread of History: A Q&A with Jacqueline Durran

Joe Wright’s Darkest Hour brings to the screen the history-defining period during which Winston Churchill (Gary Oldman)––recently appointed Britain’s prime minister––had to rally his nation against the very real threat of a Nazi invasion. With his beloved wife Clementine (Kristin Scott Thomas) supporting him, and his new secretary Elizabeth Layton (Lily James) by his side, Churchill hurtles through London––from 10 Downing Street to Windsor Castle to the underground war room––gathering the political support and public momentum necessary to unite a nation. To help bring this remarkable moment of history alive, Wright turned to Oscar-winning costume designer Jacqueline Durran.  Durran had not only worked with Wright on films like Pride & Prejudice, Atonement, and Anna Karenina, but had collaborated with Gary Oldman in crafting the look for his Academy Award-nominated performance as George Smiley in Tinker, Tailor, Soldier, Spy. We talk with Durran about the challenges of recreating history, as well as working around Oldman’s body suit, in Darkest Hour.

What did you see as your biggest challenge?

We decided early on that this film wasn’t going to be stylized. So for me the work was getting the details of what people wore right and interpreting those back as closely as I could into the actors’ costumes. Churchill is such an important character in our history that you can pretty much find all the people who made his clothes. Everyone lays claim to him. While several people made his suits, we chose Henry Poole & Co. Tailors for the movie. And we went to Turnbull & Asser to make his shirts and bow ties and Lock & Co. Hatters for his hats. We worked with them to make the items as close to what Churchill wore as they could.

You’ve worked with Joe Wright on five films. How did he approach Darkest Hour?

As someone so versed in fashion history, how would you characterize Churchill’s iconic style?

He was Edwardian. In many ways, he was almost a dandy. He was obsessed with the details of his clothing, but once he had them, he didn't change. I have a picture of him from the 1920s and one from the 1940s, and he is wearing exactly the same thing. 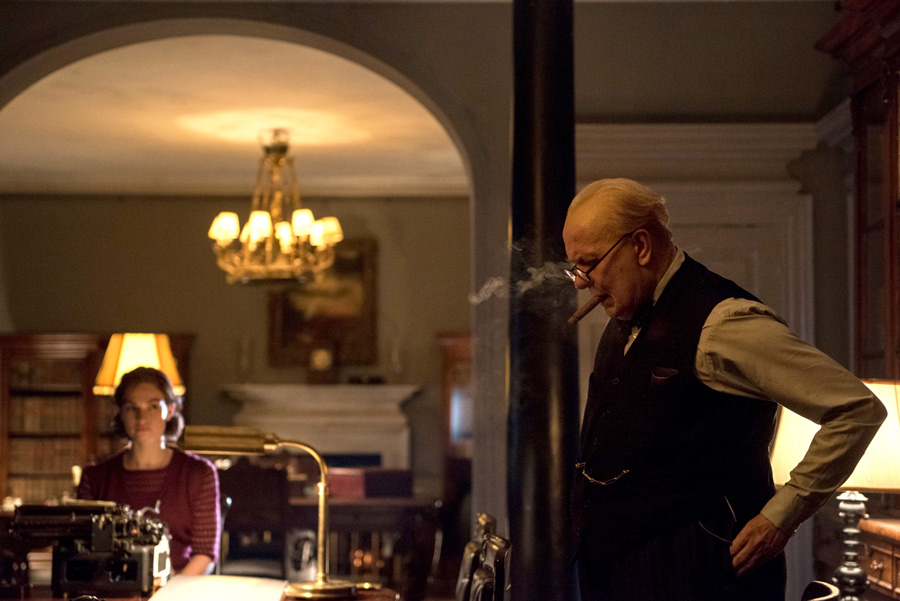 He had a different sense of fashion? One that was classic opposed to always changing?

Yes, it is as if he got all the details of his clothing just right, and then moved on, completely confident about what he was wearing. He is very much of his generation in that way. They knew exactly what they were wearing. They have all the details. They have the polka-dotted tie; they have the right shirt collar—everything is there and it doesn’t need to be thought about anymore.

How did the use of a body suit and facial prosthetics to transform Oldman into Churchill affect your work?

Kazuhiro Tsuji, who created all the facial prosthetics, arranged to have the body suit made in Los Angeles, where I visited several times for fittings. It’s very important not just see a man standing in a fat suit, but to see a clothed body to know how the costumes are going to hang over the body.  We costumed Gary and then photographed him from all angles, partially for the facial prosthetic and partially for his body shape. Then we compared the photos to the images of Churchill we had in order to give notes to the sculptor about additional changes. It was difficult to work out the sweep of the back and the rounding of his shoulder and neck––and how the prosthetic goes into that. We needed to get the angle and height of the stomach just right so he has a realistic belly, and doesn't look pregnant. Joe Wright wanted the shape to be one of those bodies with a big belly and quite skinny legs­­––so his silhouette would taper as it came down, rather than being wide and out.

Your costumes often provide a narrative arc, showing how a character changes. Was that true here?

The problem with creating a narrative arc with Churchill is that the time period of the film is too short. We didn't think so much about a change with him as capturing the different ways he looked at that moment­­. We couldn’t get many of the fabrics in the appropriate weight for the time––which I think was actually a blessing. If Gary had to wear a heavy wool suit on top of that fat suit, he might have died—or at least lost a lot of weight.

Were there narrative arcs for any of the other characters?

There was a tiny arc for Elizabeth Layton. On her first day at work with Churchill, she misjudges how to behave as his secretary by wearing her Sunday best. By the time she’s working in the war room, she’s in a green suit that fits the job. Many of the clothes in the second half were dictated by the fact that as Churchill’s secretary, she often slept in the war room. So there was more knitwear and less formal dresses, blouses and skirts. 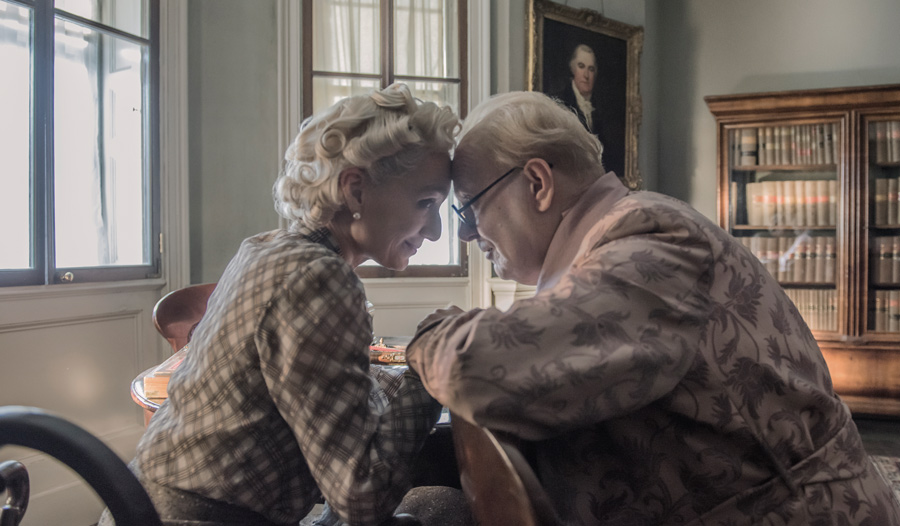 What about designing Clementine’s outfits?

Our largest work of imagination was creating Clemmie’s costumes because she was known as an extravagant dresser. We had to work out how to create a character that looks extravagant but didn’t look crazy. For her hairpieces, we just made some confections out of nets, different hat pieces, and things that you would call a fascinator today––just to get the feeling of her style. But we honed the look down and molded it for Kristin. We wanted to express that keeping up appearances for her was keeping her style alive, especially after she moved from the country to 10 Downing Street.

In dressing the other characters, and the people in London, did you aim for anything in particular?

Mostly just realism. We had King George VI (Ben Mendelsohn) in uniform, since it was a patriotic statement and it was very true to the time.  We kept the people on the street in traditional clothes. The only place that was subtly stylized was the House of Commons, which we color-coded by keeping everyone as much as possible in black-and-white—which didn't really stretch reality much. 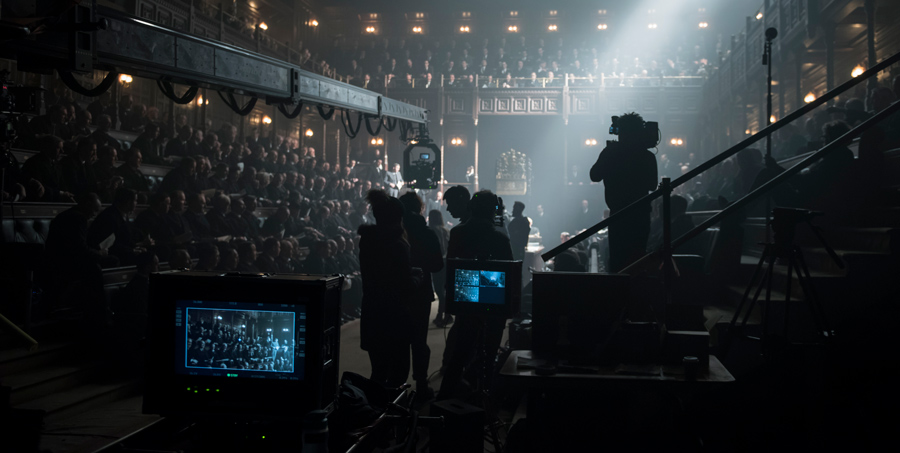 Shooting the House of Commons in Darkest Hour

What would you like audiences to come away from this film with?

The power of this story is that it made me wonder what would happen if we were in the same situation today. Would we work together as a country? Would we unify behind a leader?  And who would that leader be? In such a fragmented society, you wonder if that is possible. I hope this film is a way of giving us hope that we could. 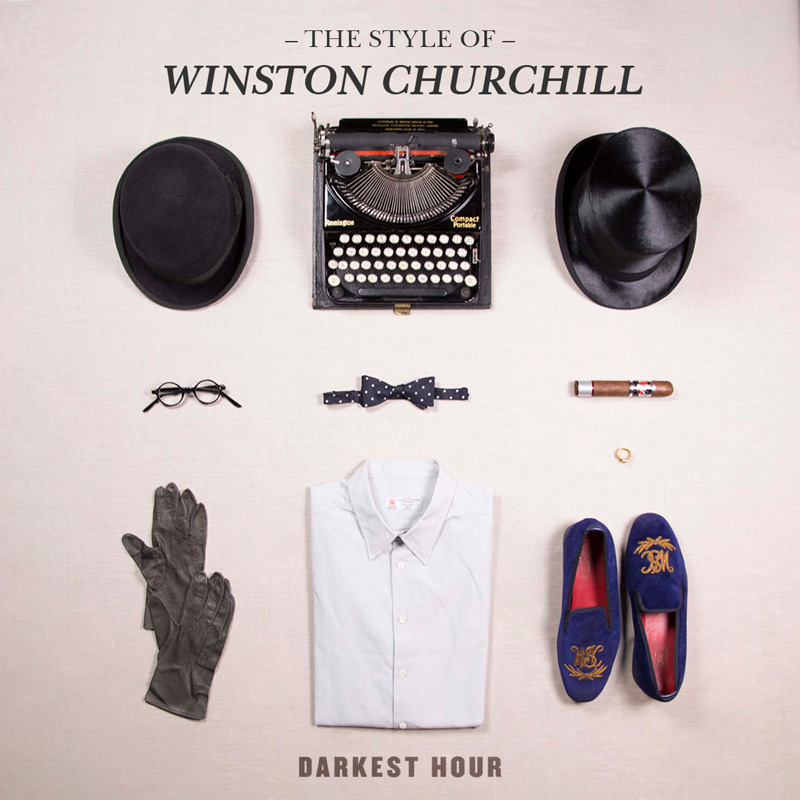 The fashion elements for Churchill's costume