From Atomic Blonde to Kubo and the Two Strings, the star of Tully is up for any challenge.

In Jason Reitman’s comedy Tully, Charlize Theron plays Marlo, a mother taking care of three children, including a newborn, who finds her life changes when a night nurse (Mackenzie Davis) shows up to help her. Theron, who is also one of the film’s producers, was drawn to the quality of Diablo Cody's bracingly real and funny screenplay. While Marlo is not an easy part to play, explains Reitman, “Charlize has the kind of bravery to take on a role like that and do it unflinchingly.” Indeed, according to Screen Daily, “Theron will put to rest any doubts about her feel for comedy” with her performance in Tully.

For over two decades, Theron has proven her ability to take on nearly every genre and type of character in ways that exceed our expectations. Whether finding the humanity in a Monster, exploding on screen in Atomic Blonde, or speaking as a spirit animal in Kubo and the Two Strings, Theron brings something new to the screen each time. In anticipation of Tully, we look back on what makes Theron consistently superb and surprising.

Charlize Theron is Marlo in the official trailer for Tully, in theaters May 4.

From model to Monster

Born and raised in South Africa, Theron took a circuitous route to Hollywood, working first as a model and ballet dancer before even auditioning for a role. Her early pursuits, however, helped as her striking good looks and graceful agility made her stand out. Within a few years, she was getting rave reviews in films like The Devil’s Advocate and The Cider House Rules. Often sought out to play glamorous parts in big budget films, Theron decided in 2002 to try something new when she signed up to play a female serial killer in a low-budget independent film by a first time director. Her role as the real-life murderer Aileen Wuornos in Monster not only garnered her universal acclaim—Roger Ebert named it “one of the greatest performances in the history of the cinema"—but also won her the Academy Award® for Best Actress.

Charlize Theron shows her acting chops in the official trailer for Atomic Blonde.

Whether doing comedy (like Young Adult or A Million Ways to Die in the West) or action (like Mad Max: Fury Road or The Italian Job), Theron completely commits to each role and project. For her 2017 adrenaline-fueled spy caper Atomic Blonde, Theron not only starred in it but also shepherded the project as its producer. She wanted both her character and this story to rewrite the rules for action films. “I’m trying to break these forms of how women ought to behave in movies,” Theron told Time Magazine, adding, “Maybe they shouldn’t behave at all.” Theron’s mis-behaving proved a hit with critics and audiences. “Theron, who did most of her own martial-arts stunts, is pure bruising poetry in motion,” exclaimed Rolling Stone. “She's a stone-cold badass.”

Get Atomic Blonde now on iTunes or at Amazon.

In 2016, Theron pushed another boundary by voicing the character of Monkey in Travis Knight’s animated adventure Kubo and the Two Strings. As the mother of two adopted children, Theron personally connected to the story and its spirit. “I was really excited about being a part of something that children would see, where the structure of the family isn’t the conventional picture of what a family is,” Theron told Buzz.ie. And her passion for the project is heard in every line. “She’s perfect here, at once imbuing Monkey with strength and a dry wit,” writes The Playlist, adding, “Her devotion to Kubo is reaffirmed through practically every word.”

In Tully, Theron again connects with humor and humanity to the role of a mother. For her, the story “came from a very real, deep place and I think as a mother I could feel that. That kind of honesty is rare. I had never seen or read anything about parenthood like this script.”

Get Kubo and the Two Strings now on iTunes or at Amazon. 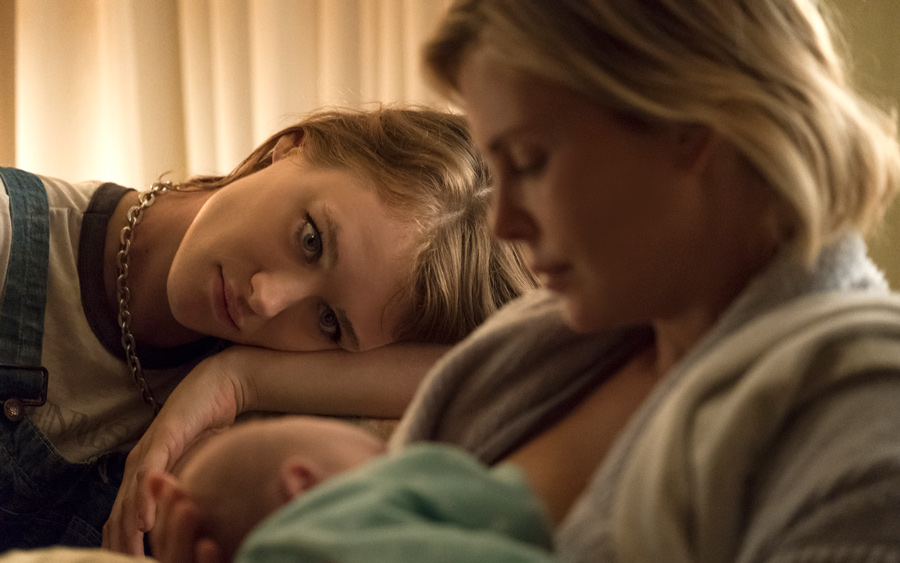